Roberto Ugolini is one of the most famous bespoke shoemakers in Italy, who made his name with a distinctive Italian style of shoes and a desire to teach and share his knowledge. Shoegazing visited his workshop in the heart of Florence old craftmanship quarters, in the first article in a series about different bespoke shoemakers in the city. 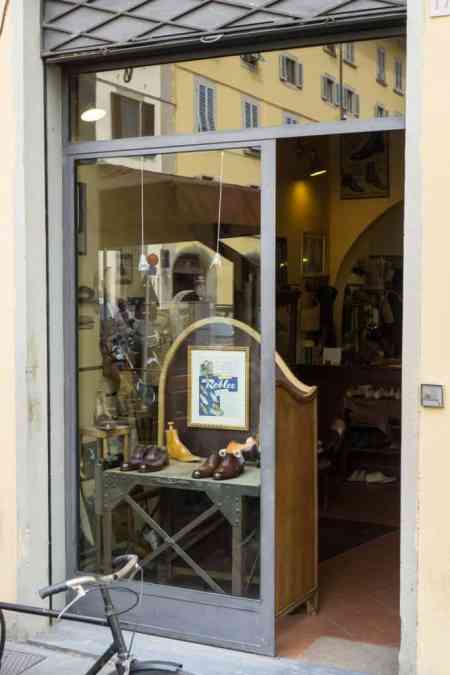 Florence is a relatively small city, considerably smaller than what many people think, it has no more than 400,000 inhabitants, and you can without problems walk throughout the whole city center which is located on two sides of the river Arno. But as the capital of the Renaissance and a major cultural center and you have a reputation that obliges. Even the craft tradition is strong in the city, the bespoke shoemakers that houses here are all relatively young, but they do have the city’s history to lean on.
Roberto Ugolini began working with shoes more than 20 years ago, initially as a repair cobbler. He soon began making his own shoes, and since 1995 he has focused only on bespoke shoes, and contrary to many of his colleagues in the city he has no RTW or MTO collection. His workshop and showroom is very small, maybe 15 square meters or something. Along the walls are shoes on the shelves and in cabinets, a small table with three workstations, and behind a counter lasts are hanging on the wall. When I’m visiting Ugolini is in Japan for a trunk show, so I talk to his namesake Roberto Di Monte. He has worked for Ugolini for over five years, first as an apprentice and now as an employee.
– I have developed fast here, Ugolini is a good teacher, he says. 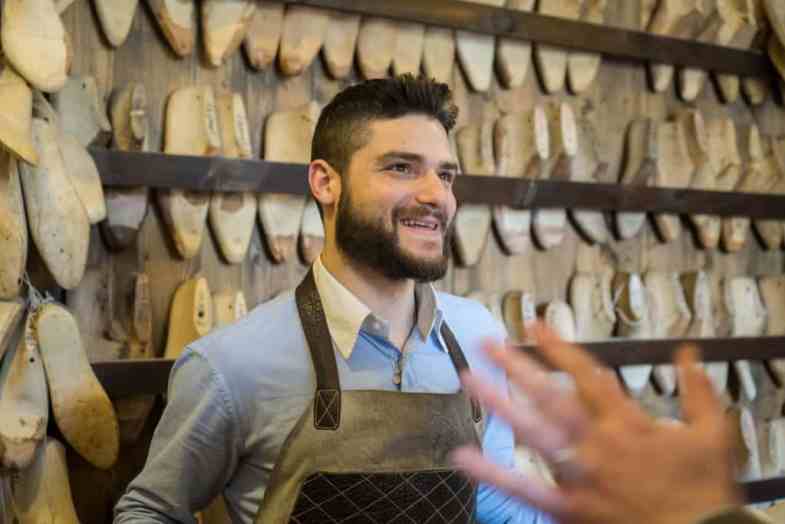 Roberto Di Monte who has been at Ugolini’s for five years. 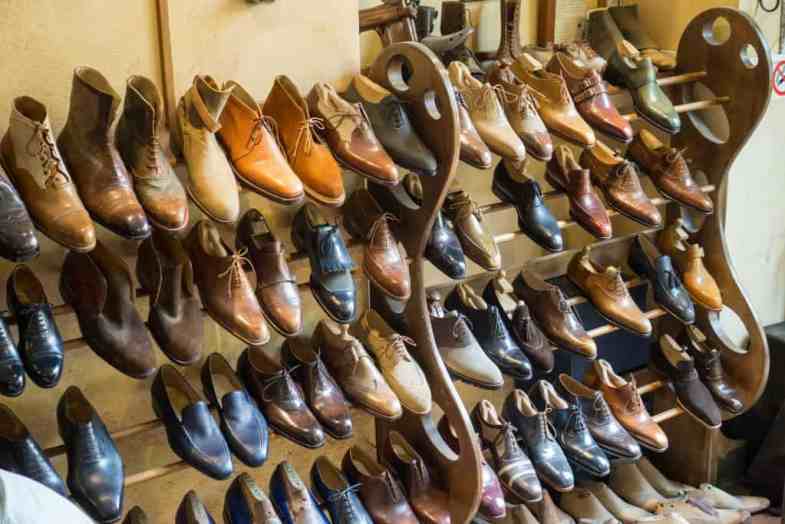 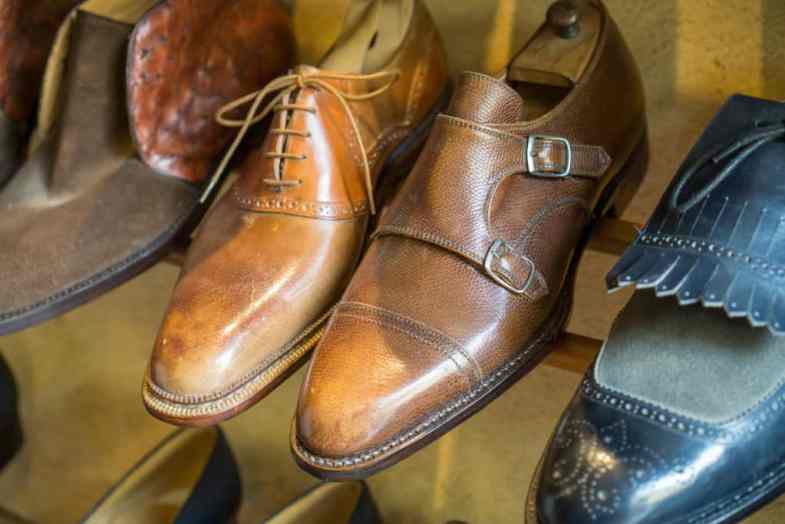 There are many who have gone ahead and made a name in the industry after  apprenticed for Roberto Ugolini. A few of examples are the Japanese Yutaka Seigaku, better known for his brand Corno Blu, and the founder of Spigola, Koji Suzuki. Roberto Ugolini has for many years been popular in Japan (as perhaps familiar, it was the luxury department store Isetan Men’s which brought him and Vass together for whom Ugolini made the U and F lasts) and has both a lot of customers there, as well as many who want to come and learn to make shoes. Today they have a partnership with a Japanese craft school, where the current apprentice Shin comes from. 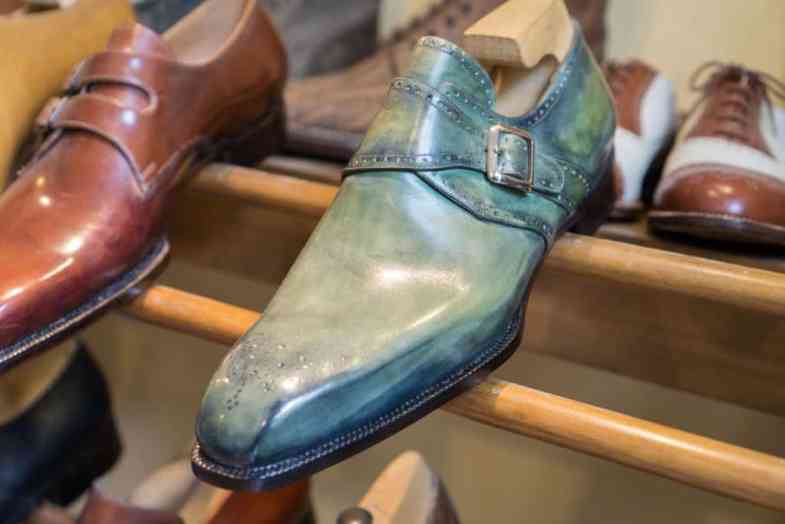 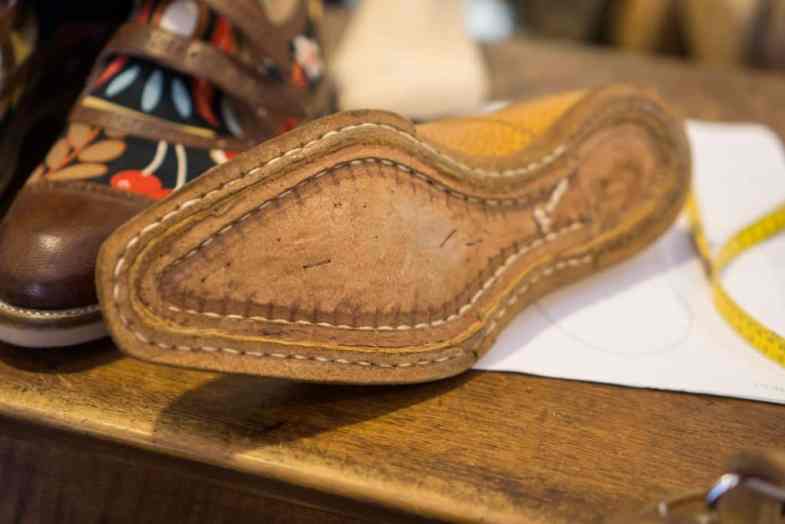 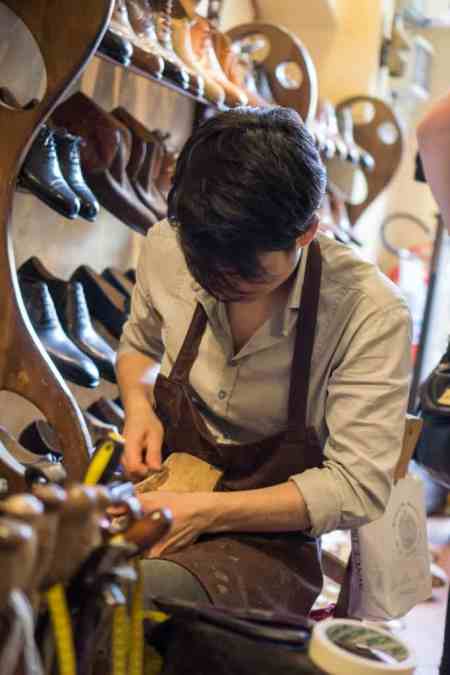 The fact is that a majority of Ugolinis customers are Japanese, and he is also there twice a year for trunk shows, today only at Coccinella in Osaka. Otherwise, it’s a mixed bag of different nationalities who purchase shoes from him, however, only about a tenth of them are Italians.
Production in the workshop is not very large.
– We make about a hundred pairs a year, sometimes more, sometimes less, partly depending on how skilled the apprentices who are here are and how much they can contribute to customers’ final shoes, says Roberto Di Monte.
The price for bespoke shoes from Ugolini is relatively low, they start at € 1500 when ordering in Florence, a little more expensive at trunk shows since it coversfor the trip and sometimes compensation to the store where it’s kept. At least one fitting is made, and the waiting time for the finished shoes are usually about one year. Long wait, but probably worth it. 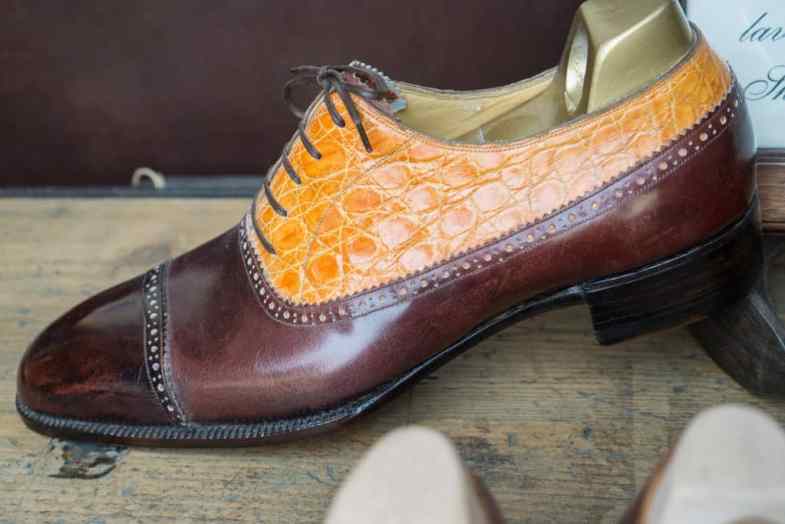 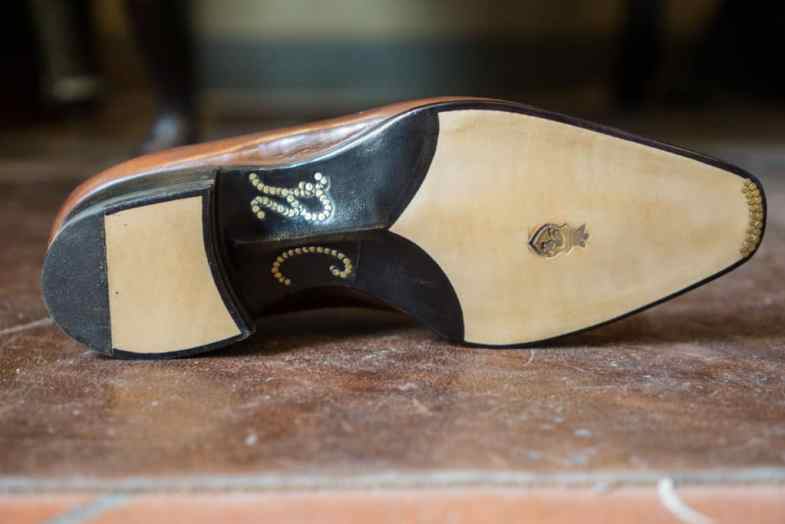 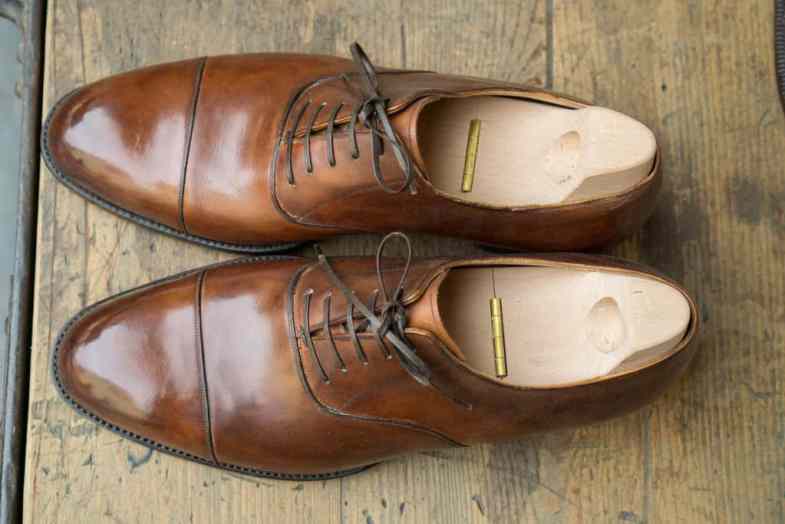 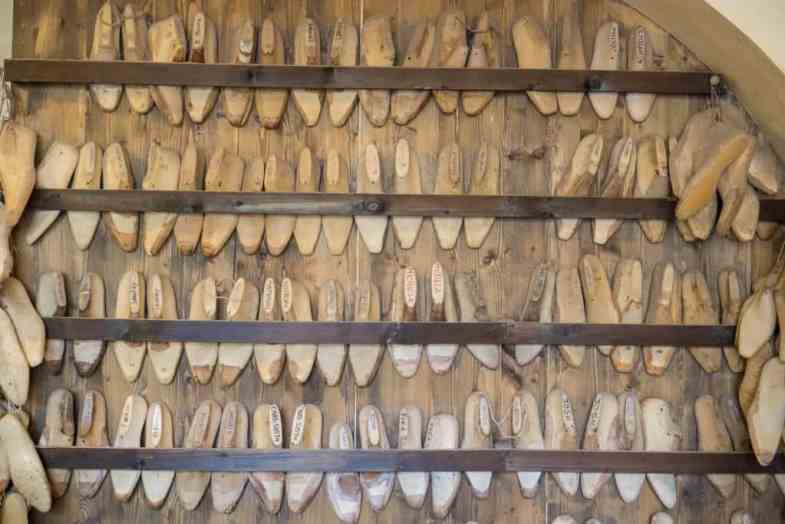 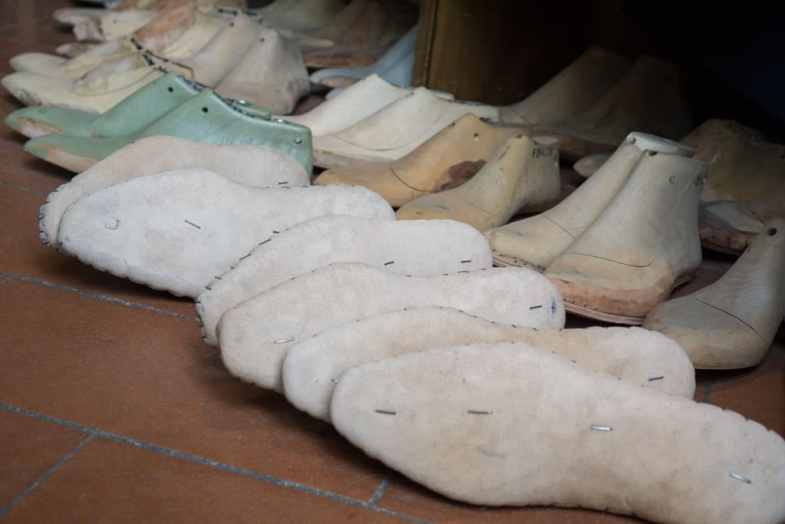 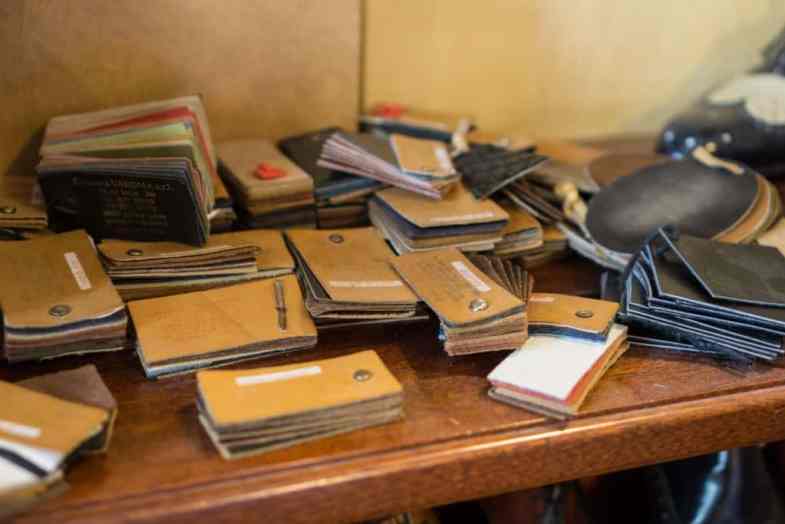 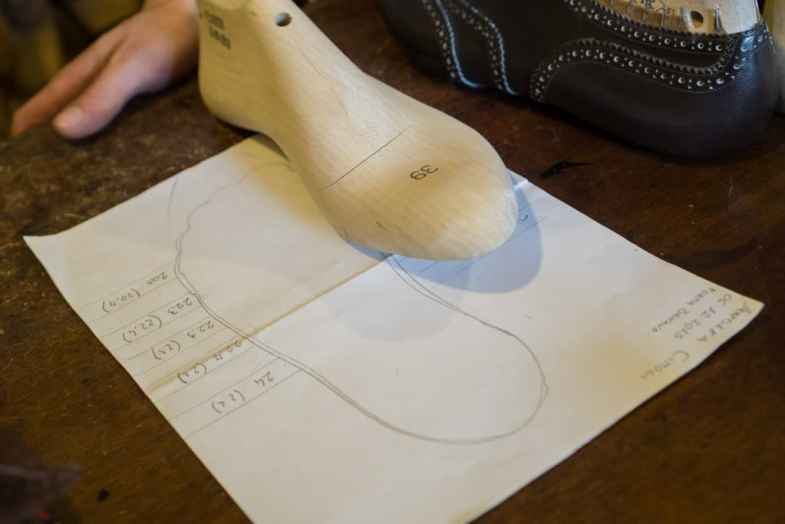 Last work to be started. 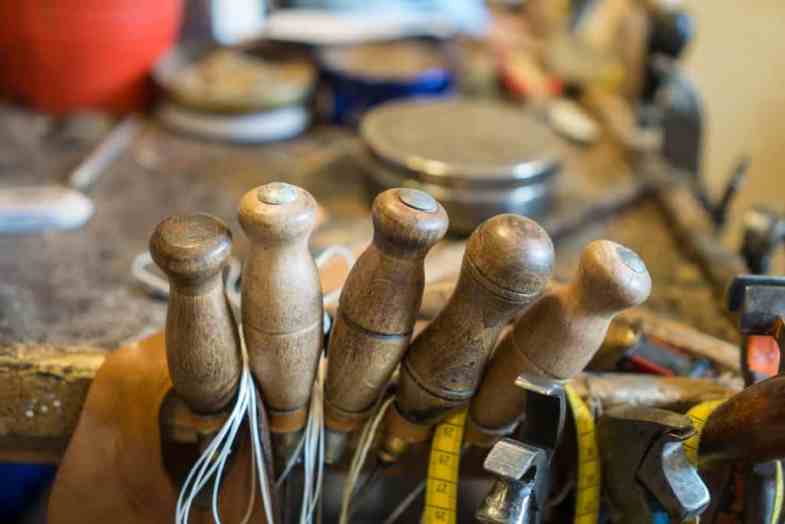 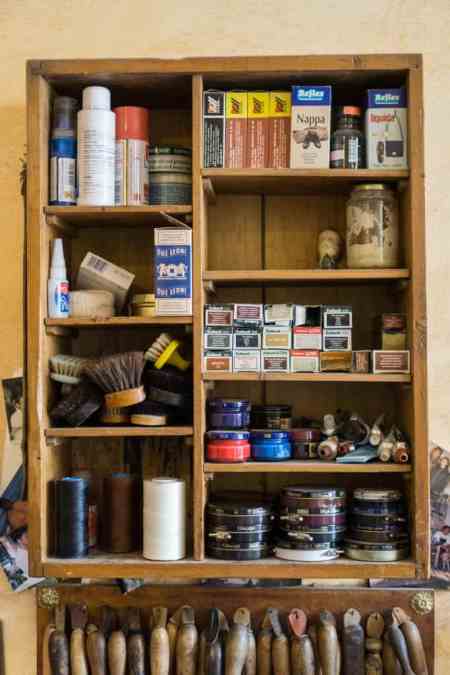 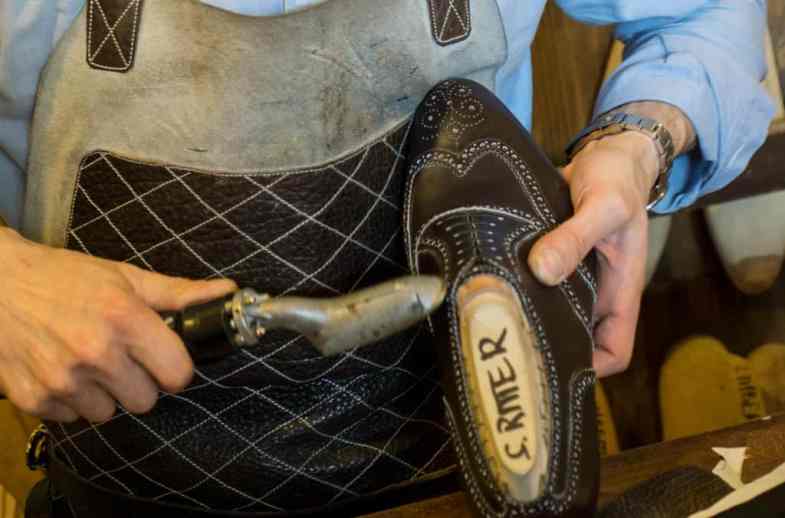 The upper being treated. 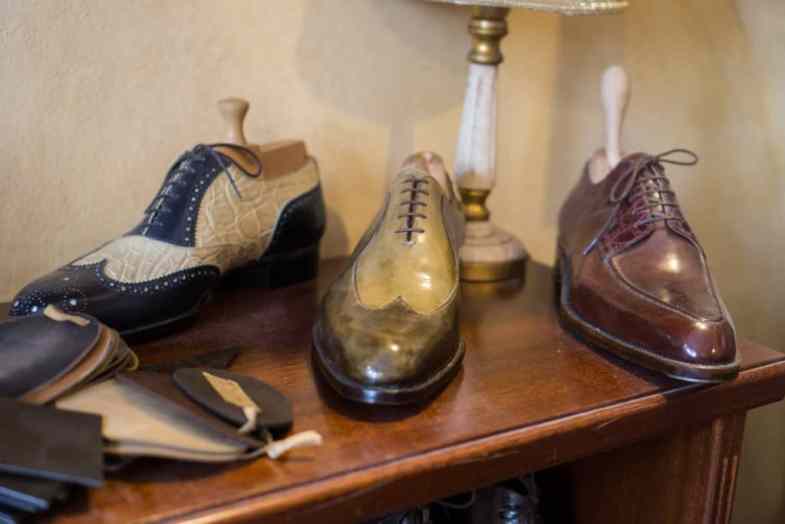 A bit more extravagant shoes. Some of the pics: Lina Dahlström