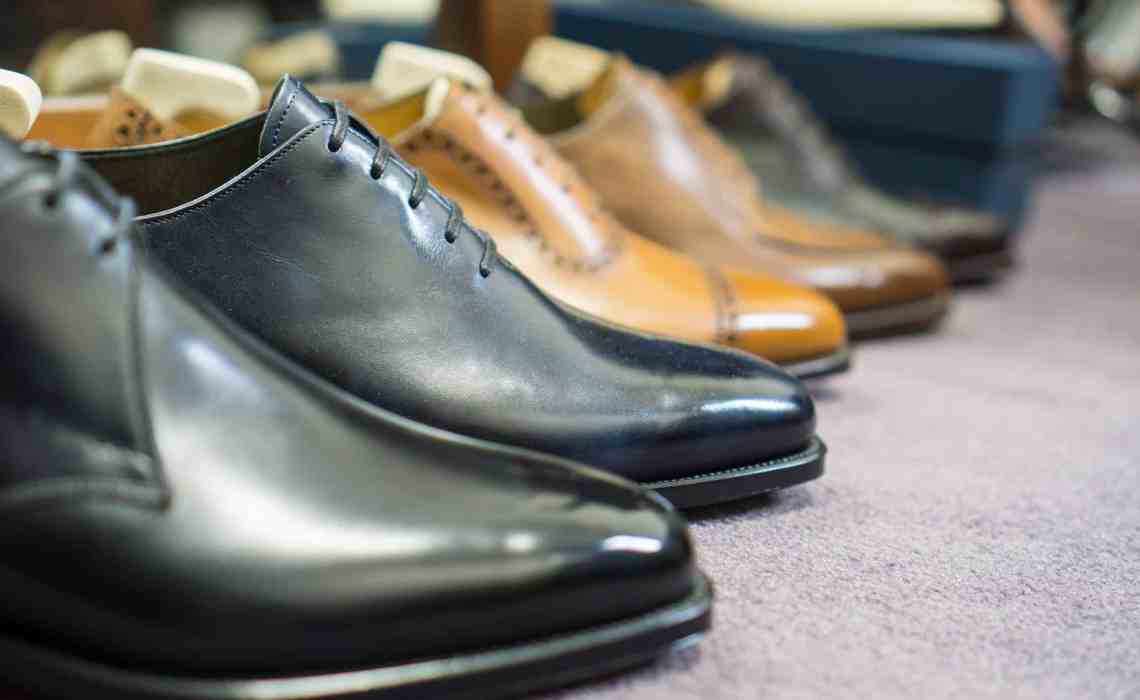 The small Japanese RTW/MTO manufacturer Joe Works has quickly made a name for themselves both in Japan and internationally. It has not been due to mass marketing, they may be active on social media but do not do overly great pics, they just make really nice shoes and with that you come a long way.

For shoe interested people it’s a great experience to wander around in the Tokyo neighborhood Asakusa. During the early 1900’s, this was Tokyo’s entertainment center, but the area was bombed hard by the Americans during World War II, and after that Shinjuku took over that role for the city and Asakusa instead developed in a completely different direction, where one leg has been as a center for crafts in general and footwear in particular. It’s still this way today. While walking along the streets one constantly pass by workshops that make different kinds of shoes, there’s lots of wholesalers who sell materials for footwear, many office buildings hold stalls where freelance closers and other specialists are working, and in the south near the popular tourist destination Senso-ji temple it’s packed with shoe shops of all kinds. There are still some major factories in the area, but above all it’s smaller manufacturers with only a handful of employees. In this way the area reminds more of for example the Italian shoe district Marche, rather than ones like Northampton in England or Almansa in Spain, where there are more large-scale factories. Just as in Marche it’s also a great variety of shoe styles that are made here, from cheap slippers to classic bespoke shoes of highest class are manufactured in the houses here. 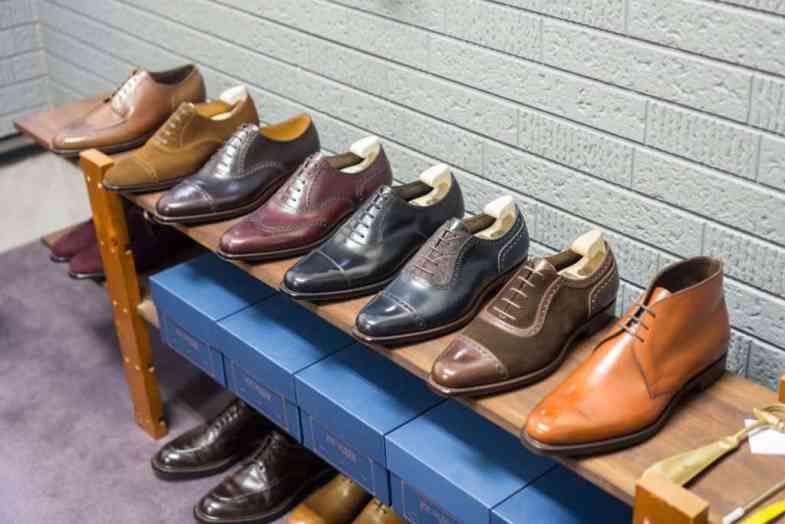 A number of models in Joe Works’ showroom. 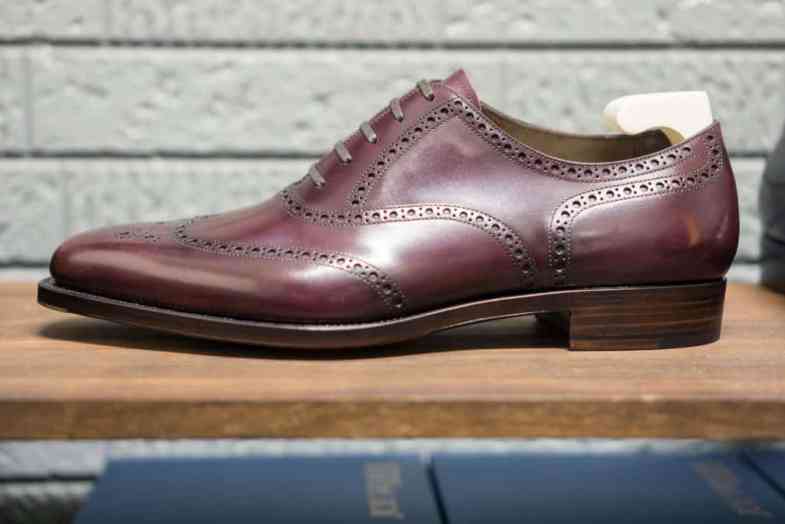 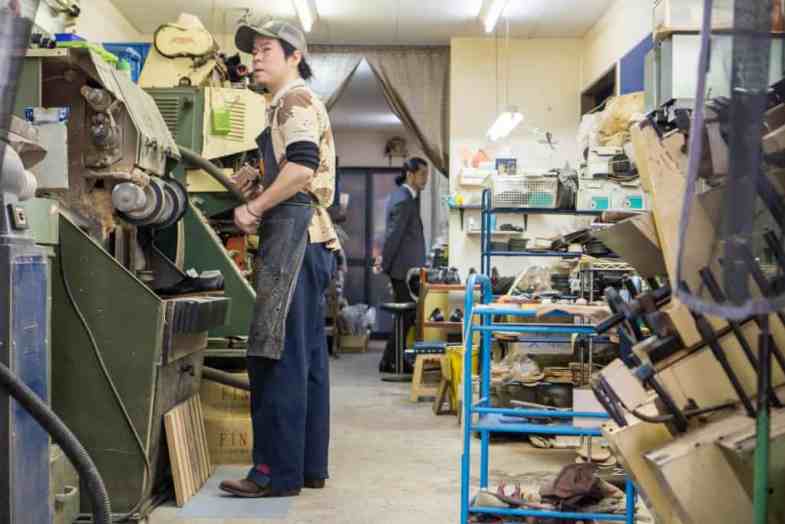 Joe Works is based in the north of Asakusa. On a small street with three or four-storey buildings, there’s an open garage door, where a long, narrow workshop open up inside. It’s more reminiscent of a bespoke workshop than a shoe factory, but it’s Goodyear welted shoes in the price range €550-700 that’s made here. The company was founded just over two years ago, and consists of only three people. Kazutoshi Endo make patterns and lasting (when the shoes are attached to the last), Atsushi Okada makes the bottom work (the actual assembly of the shoes), and James Komazawa deals with administration, marketing and finance as well as doing various small jobs in the workshop. The closing (stitching of the uppers) is done by freelancers. The first two, Endo and Okada, both previously worked at Central Shoes, one of the more well-known Japanese manufacturers of fine Goodyear welted shoes. Komasawa has worked with import/export at various shoe companies.
– We met through a great interest in shoes, not only as a profession, and wanted to do something together. So in March 2014 Joe Works was born, James Komasawa says, which is the one of the three that can speak a bit of English and also translate for the others. 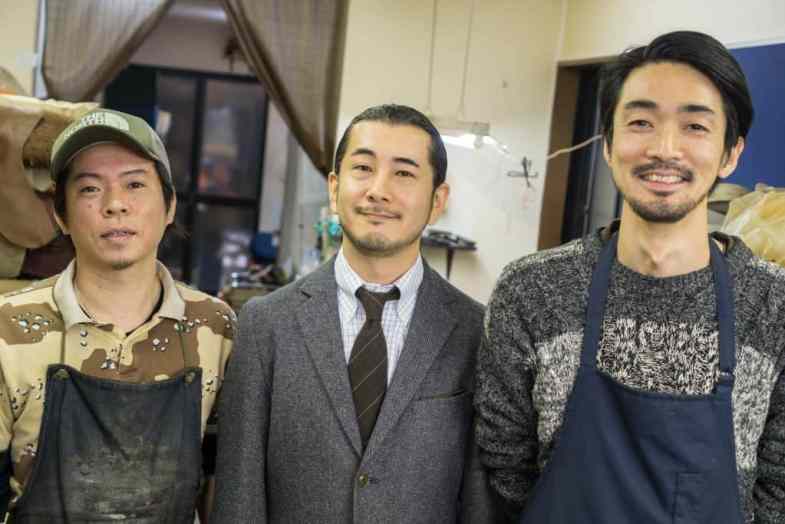 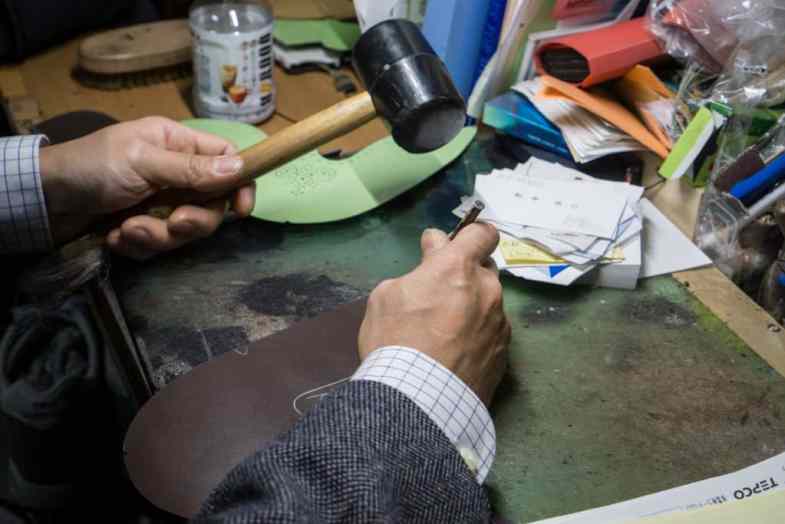 Brogueing are being punched. 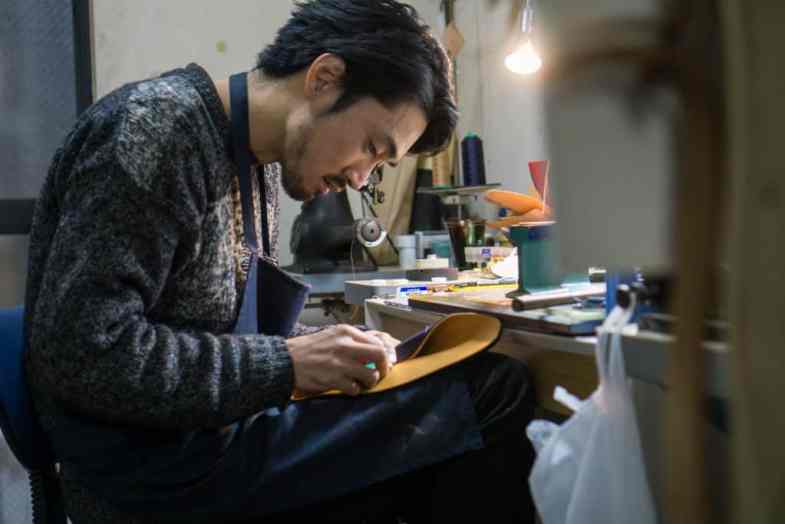 Preparation of the uppers before lasting.

At the end of the workshop is a narrow staircase up to a small showroom, where large parts of the brand’s range are on display. They work with two lasts, an elegant last with a soft square toe known as 0, and a bit chunkier and more causal last named 6. The inspiration is British and very classic.
– It’s also our more plain models that are most popular, like a punched cap toe oxford and derby with two eyelets, Komasawa says.
The shoes are neatly made, with nice details like seamless back on most models and that the heels are relatively tight cut. Leathers they use are exclusively European, from the well-known tanneries Annonay, Weinheimer, Zonta and Charles F. Stead. Given the level of quality I think they have, the price is clearly impressive. RTW start at about €550 (68,000 yen), and the price of MTO are the same. They also do MTM/semi bespoke, where they can modify the standard lasts slightly, the surcharge varies depending on what changes need to be made. 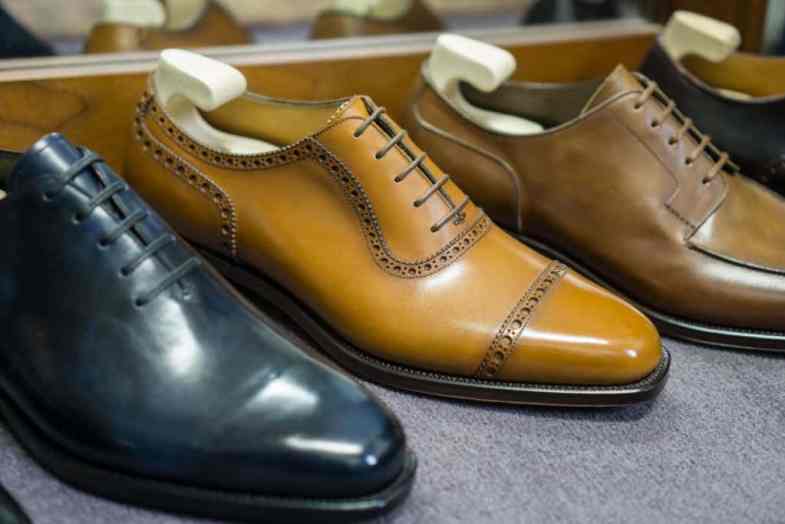 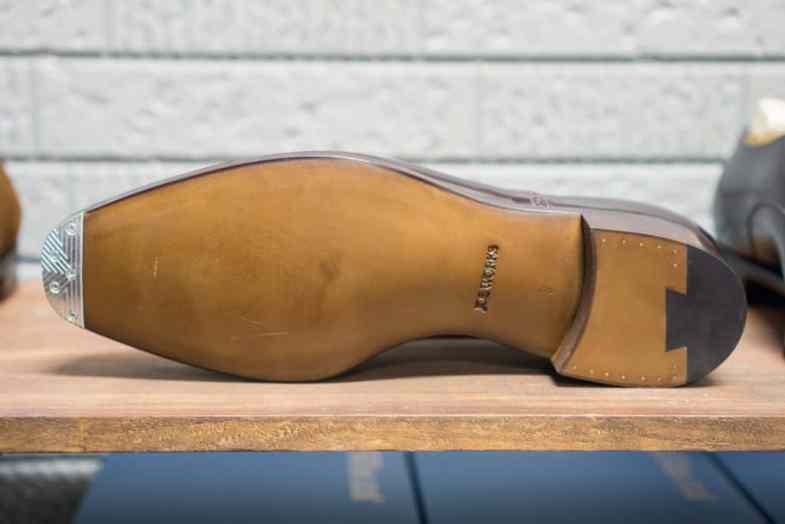 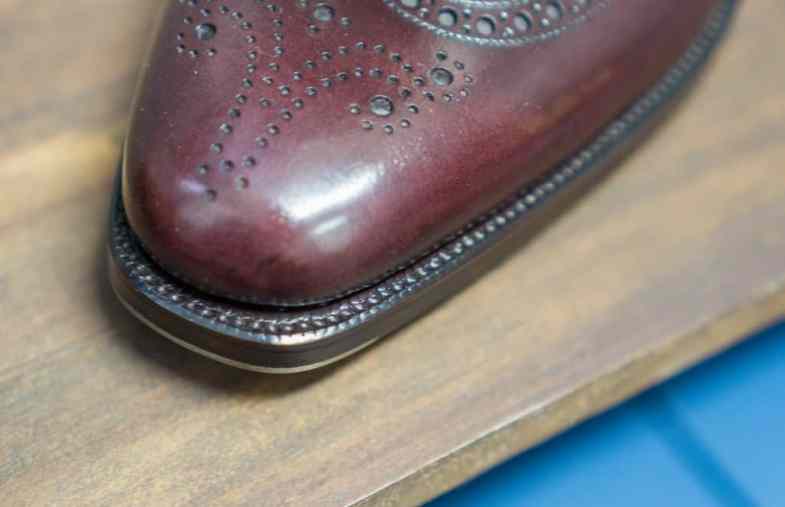 Close-up of the sole stitching and welt work.

Business is going well. They currently sell at a number of retailers like Milestone Suzuki in Sapporo or Natoriya in Niigata. In addition, they produce private label shoes for Clematis Ginza and Kokon. But direct sales are important, and here their Instagram has meant a lot for the dissemination of their names.
– It’s mostly Japanese customers, perhaps 80%, while the rest are international, James Komasawa says.
The production is still small, about 1 000 pairs a year. They want to grow, develop more lasts and models, selli more. But slowly.
– We have no hurry. Most important is that we continue to keep the quality high, and get satisfied customers who wears our shoes. There’s the real value for us. 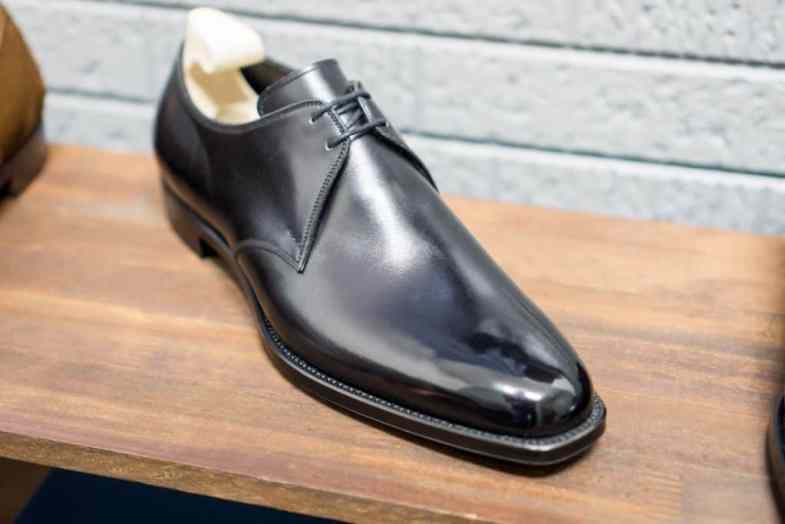 One of the top selling models. 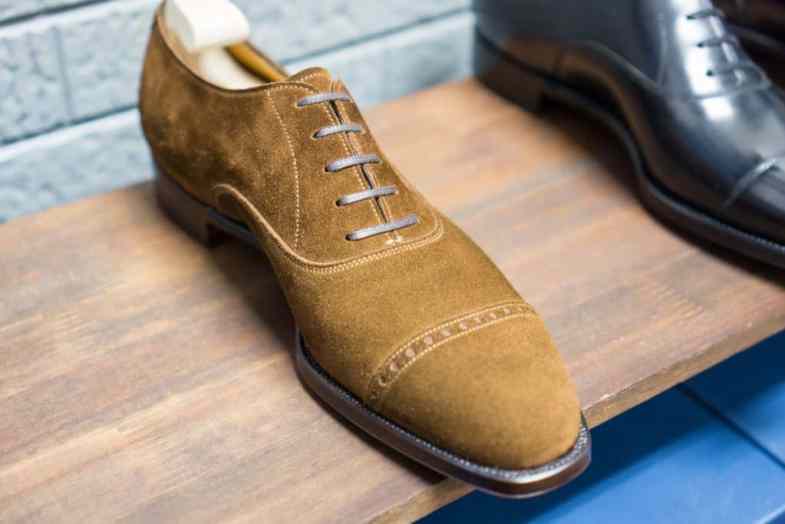 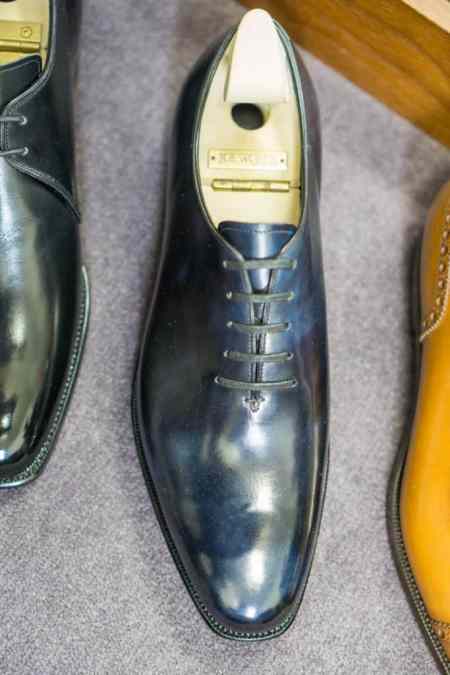 0 last seen from above. 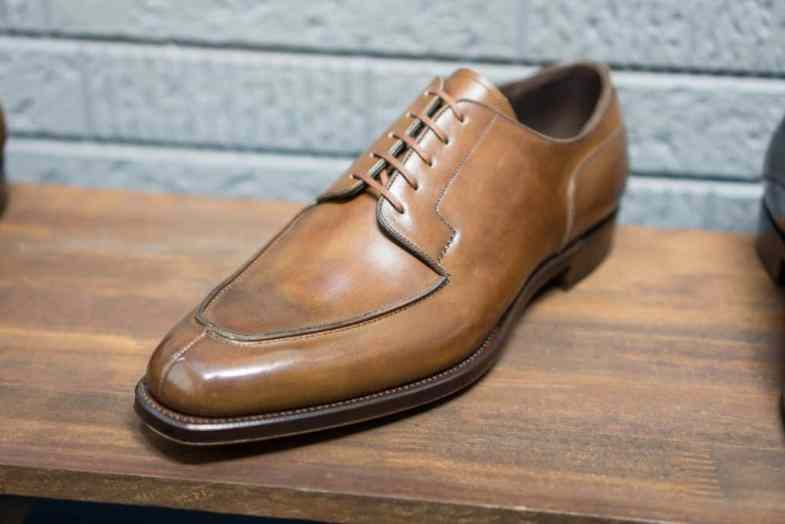 Like several other Japanese RTW brands Joe Works has a really nice classic split toe derby in their range. 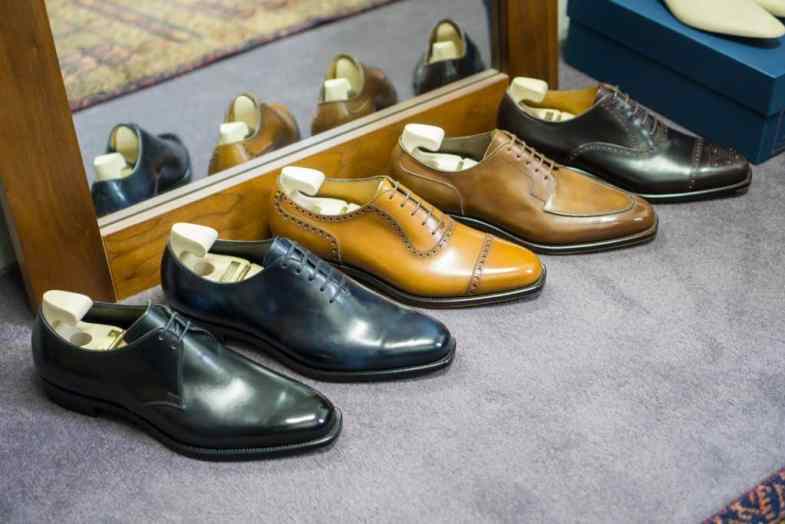 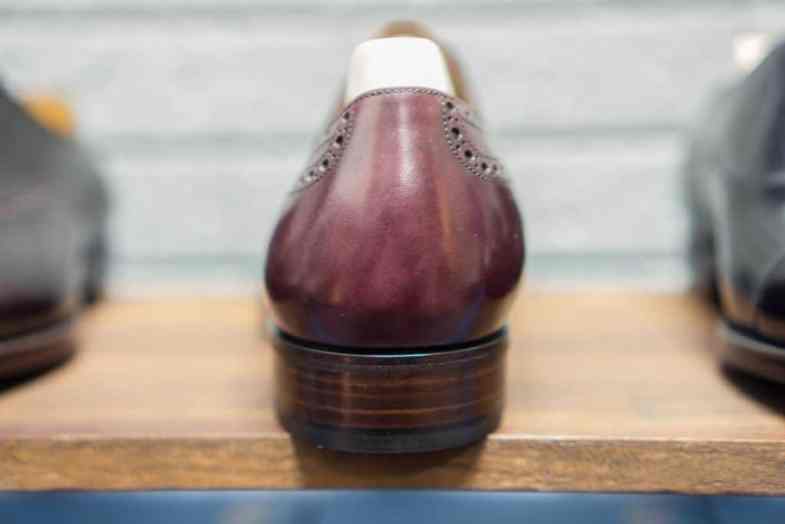 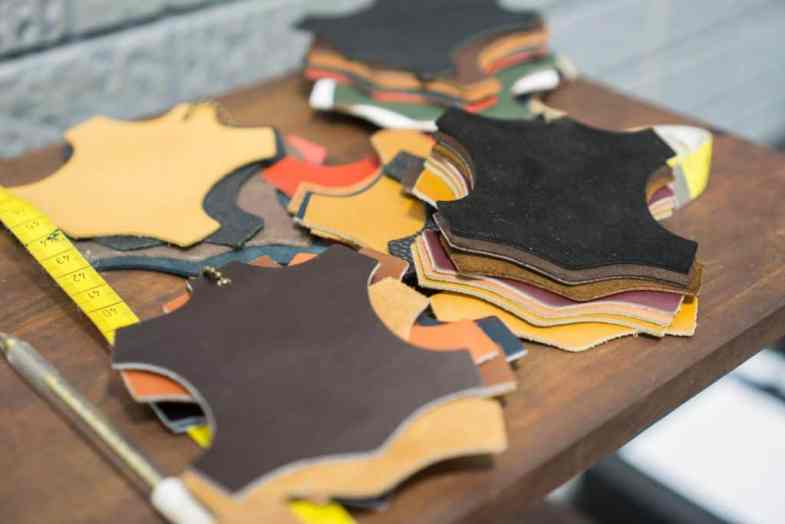 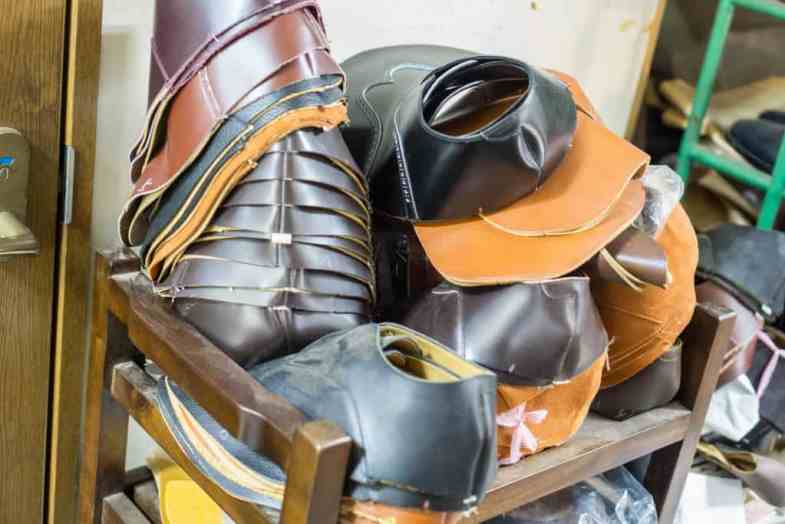 Uppers awaiting the rest of the production. 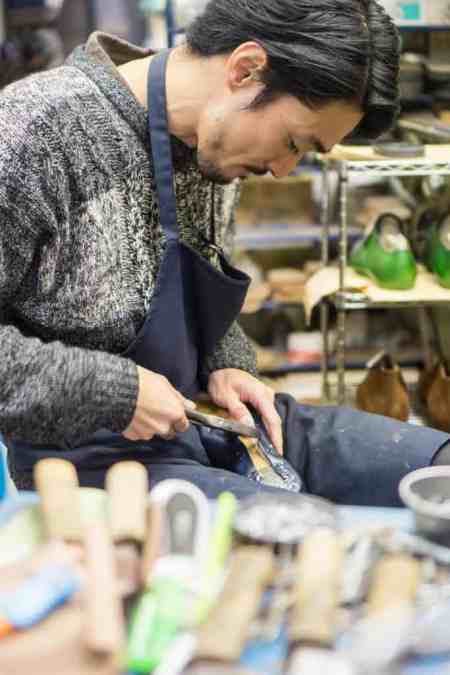 Lasting is made by hand. 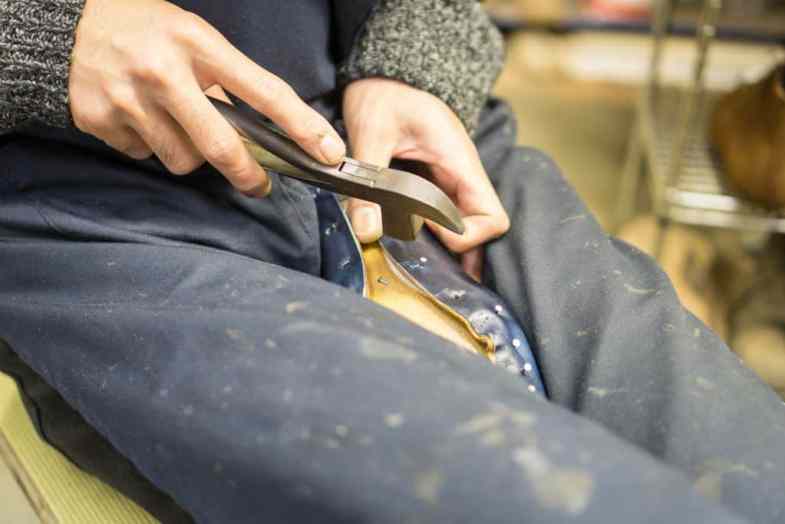 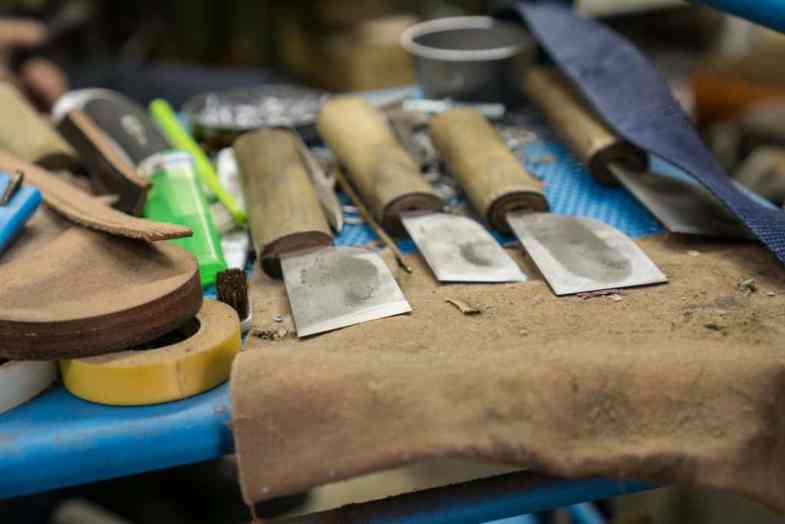 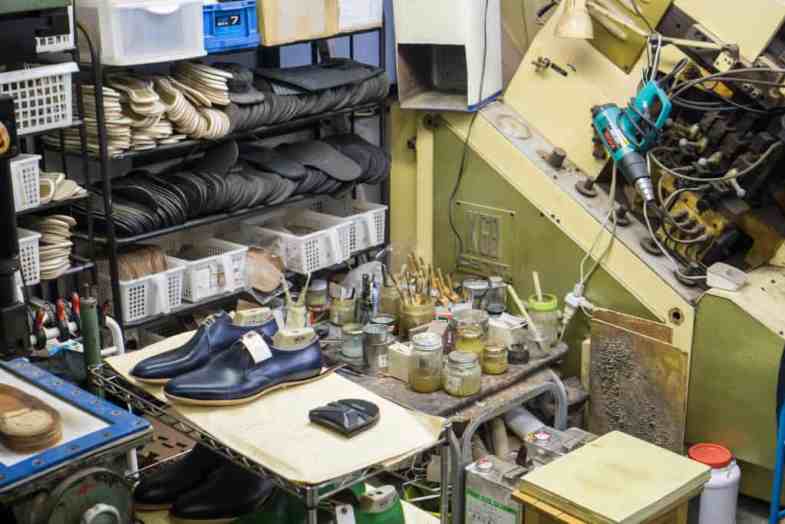 One of several work stations in the workshop. 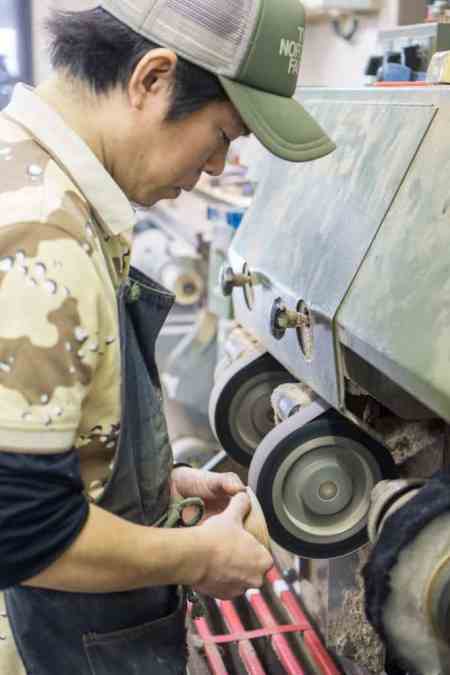 The heel is sanded. 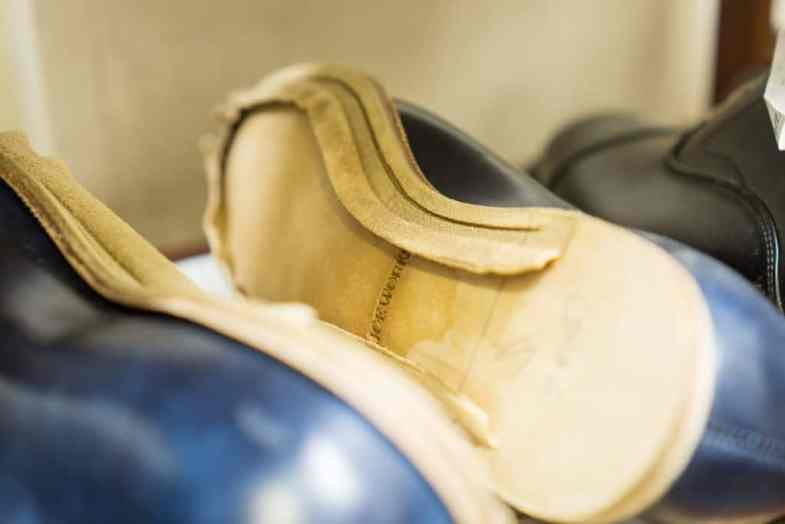 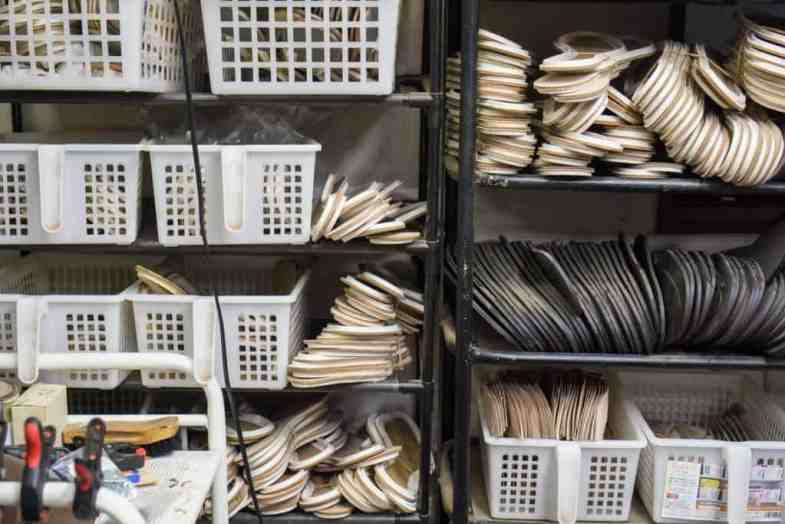 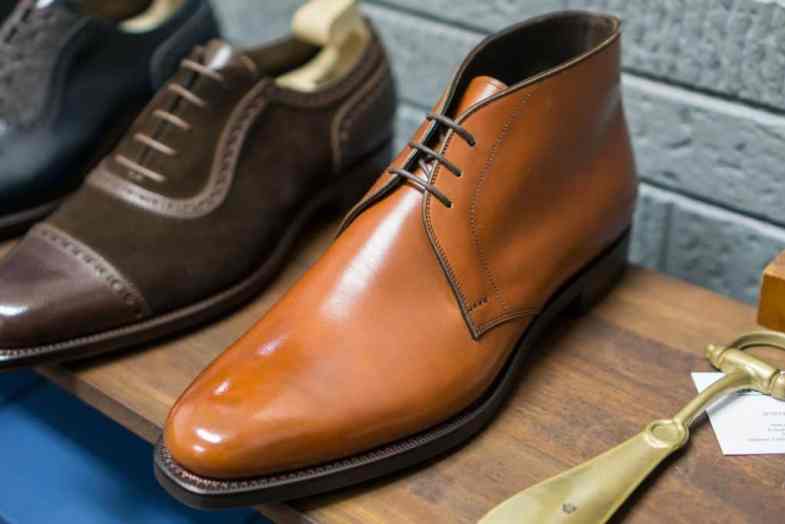 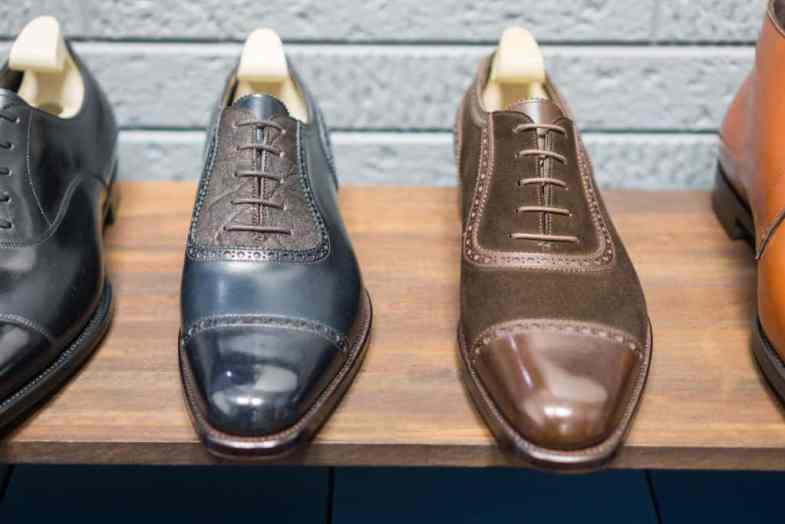 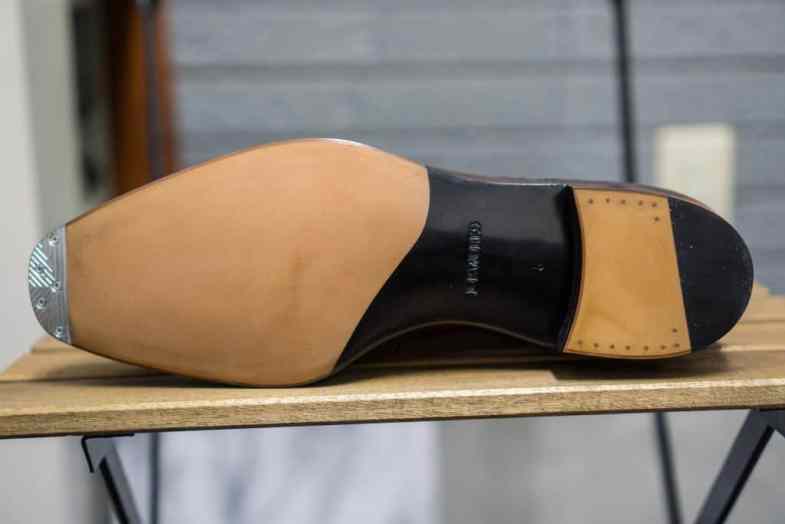