It is easy to think that all shoe models made on one and the same last will always fit the same. It doesn’t necessarily have to be true, since the model’s pattern can affect how the shoes fit on the foot.

To begin with, the most obvious example, which most people also know about, is that it differs between how the three main types of shoe models fit – oxfords, derbys and loafers – even if they are made on the same last. Oxford shoes have a closed lacing that goes together at the bottom of the laces, with the tongue as a loose piece inside. That model is usually a bit tighter than an open-laced derby, where the facings are part of the vamp and you have a larger opening with the laces’ wings that sit together with the side quarters on the shoe. Especially at the place where the pattern differs the fit is affected, at the instep, but it can be the general experience that the derby becomes a bit more spacious. Monk shoes in most formats are more like derbys, as they have a larger opening. 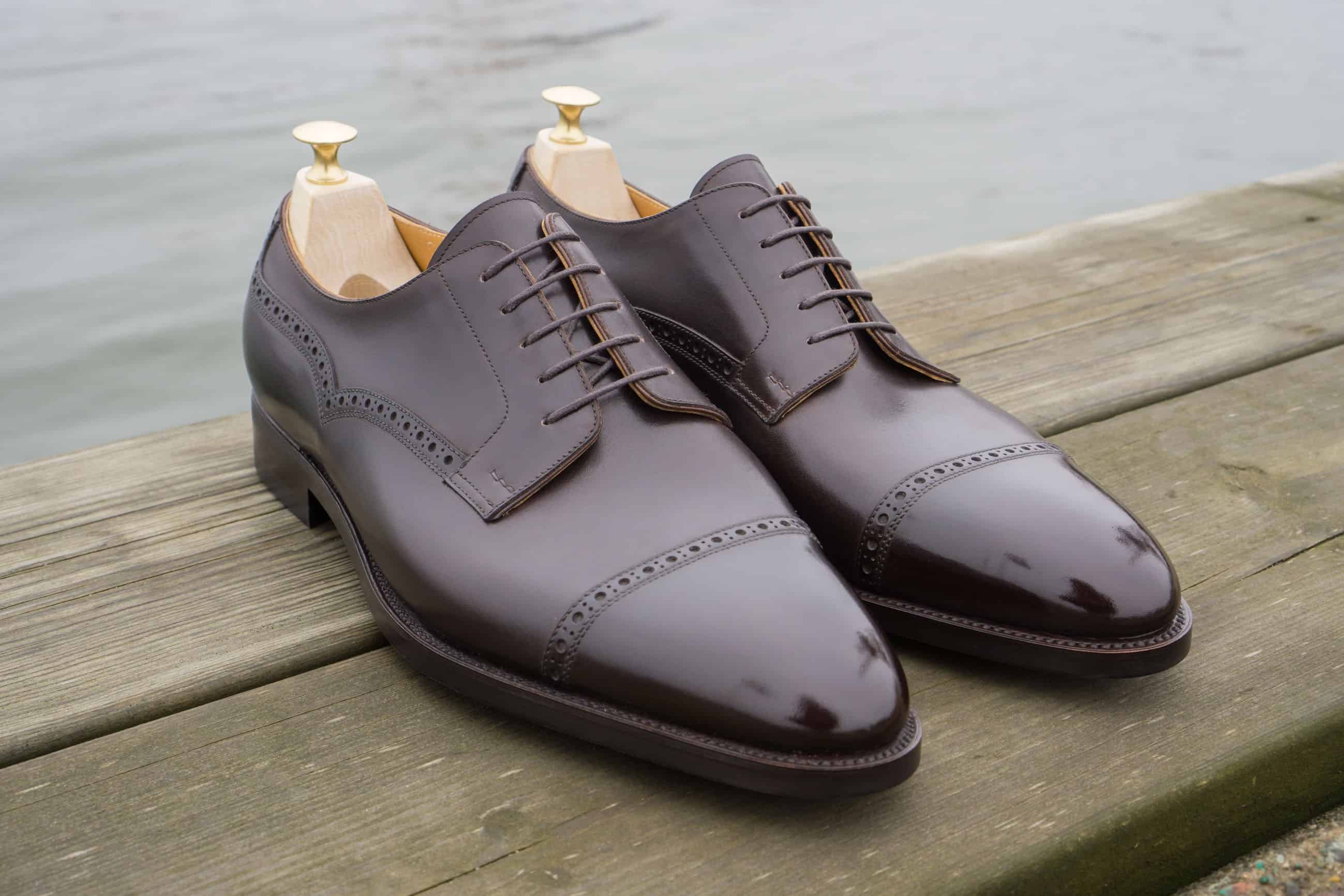 A derby shoe with its open lacing leaves more space for the instep.

Loafers are obviously a bit special, since they cannot be adjusted on the foot. Therefore, as a shoe model, they are more reminiscent of the oxford in terms of fit, in that it is tighter in general. But most makers make special last for loafers. It’s not that, as many people believe, you lower the instep for it to hold the foot better, but in fact just the opposite. The instep on a specific loafer last is raised, to make it easier to get in and out of the shoe. In return, you take in the sides at the opening of the shoe and make it tighter here, so that you do not slip out of the shoe and the general volume at the opening becomes the same as on regular lasts. However, it’s possible to make loafers on regular lace-up lasts, which some manufacturers do, they can fit well (some who have problems with heel slippage on loafers may even think they fit better), but then be a bit harder to put on and off. 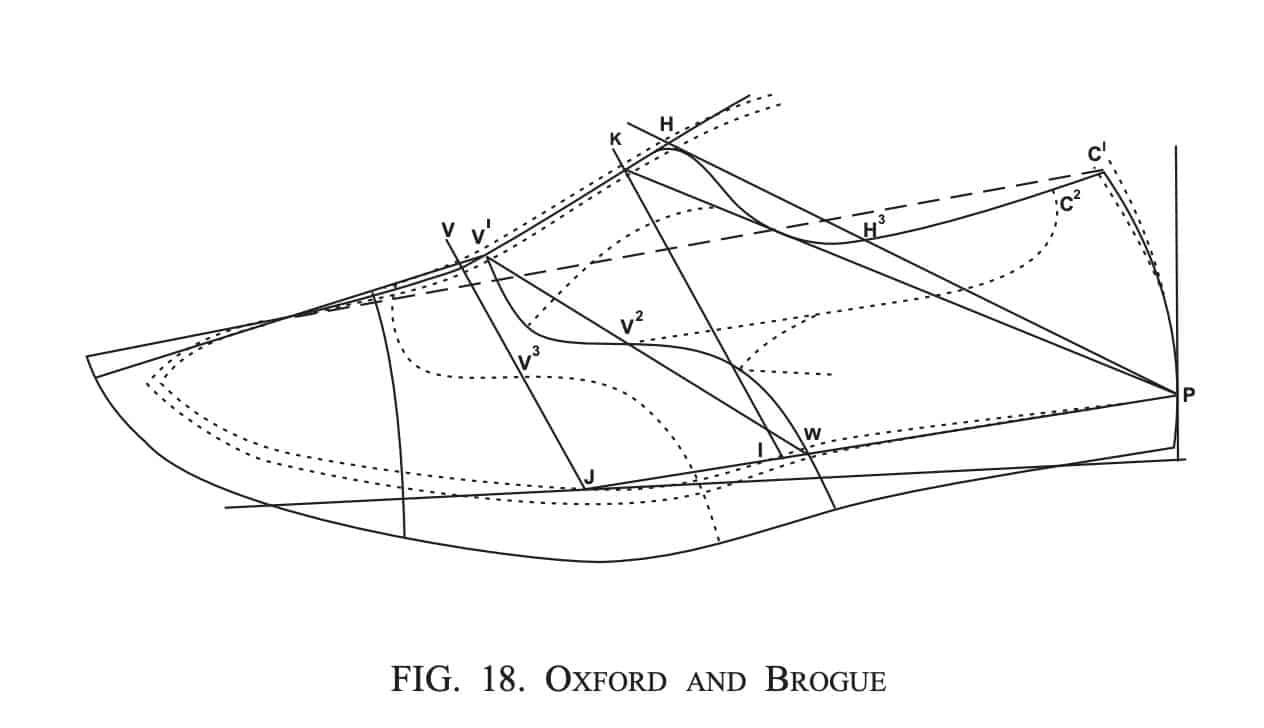 But in addition to these more obvious examples, it’s also good to be aware of the fact that when a shoe manufacturer makes a shoe, they use the pattern to follow the shape of the last, hence the foot. Pattern engineering is a whole science in itself, and nothing we should dig ourselves into in detail, but I’ll give an example. Imagine a wholecut, which is one piece of leather that is usually stitched together at the back of the heel. Here you have very little space to shape the upper part in advance according to the shape of the shoe, you need to do a lot of work at the lasting stage (when the shoe is pulled on the last). If you instead, for example, take a plain plain cap toe oxford, then the pattern is made to be able to put it together so that it follows around the last, so that when the upper leather is sewn together in many ways have adopted the shape they will have on the shoe. It’s as mentioned before here on the blog often that what we see and are used to, that we think looks good, from the beginning was made from a practical point of view, and the angle that goes from the bottom of the lacing and follows with the back turning down towards the heel is made so thatyou easily shape the upper part after the last. 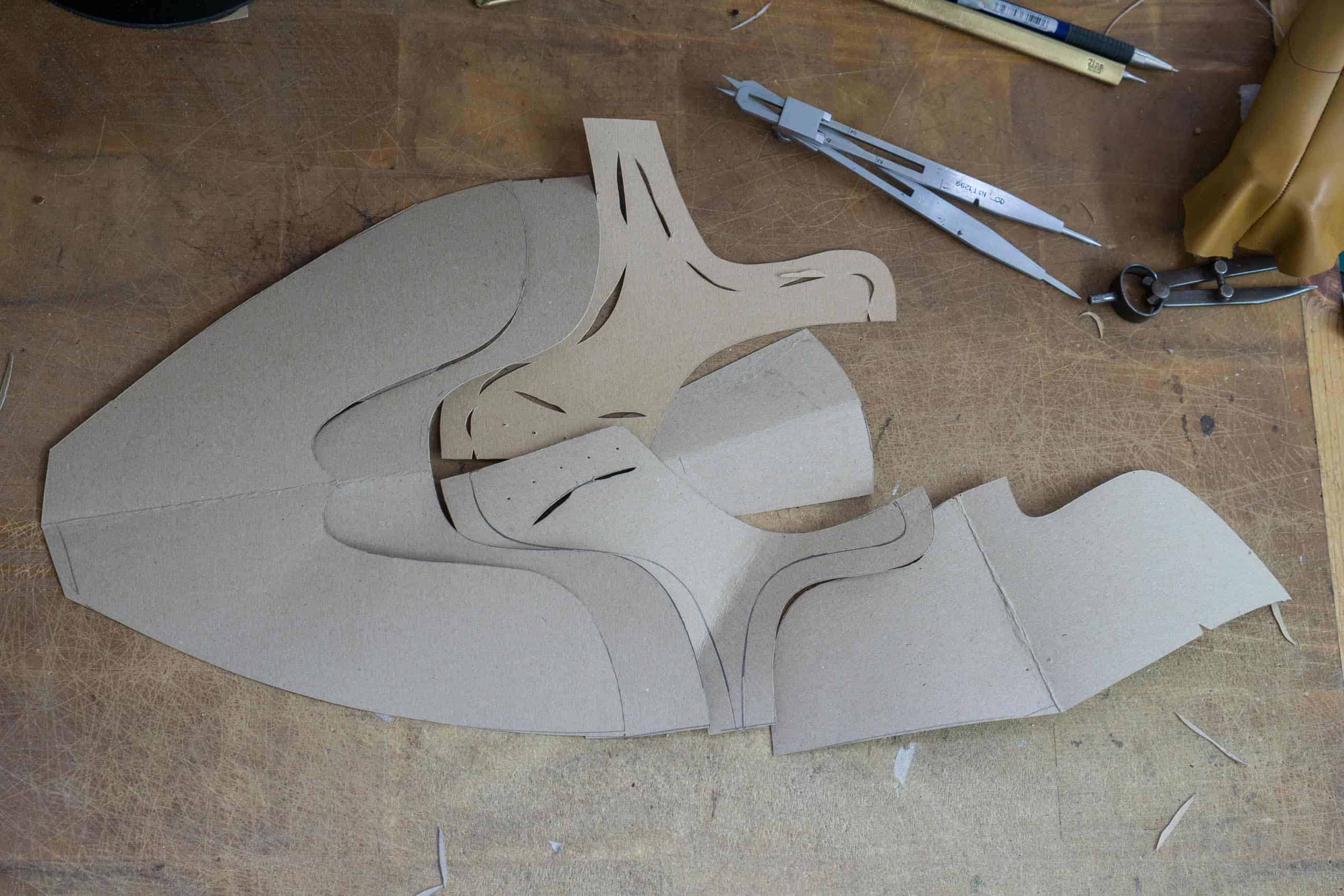 Here you can get a picture of how the pattern is used to shape the upper as the final shoe.

Furthermore, it can be said that pattern design is aesthetics, while pattern making is essentially mathematics (which is why there are now many computer programs used in pattern making for shoes). If you put a stitched upper of a wholecut and a plain cap toe oxford next to each other, the wholecut will be more like a flatfish compared to the relatively formal upper next to it. On the final shoe you may also find that a plain cap toe oxford or an adelaide or similar follows the foot a bit more, that it sits tighter around the arch of the foot, for example, since the pattern contributed here, while the wholecut did not receive the same help. Especially in factory-made shoes where you do not have the opportunity for the same accuracy when lasting, the difference can be experienced, handlasted carefully made bespoke differs less between the patterns in the experience of fit, if you take this type of example. Also the quality of the patterns, how well they are made after the lasts’s shape, can affect fit a bit. 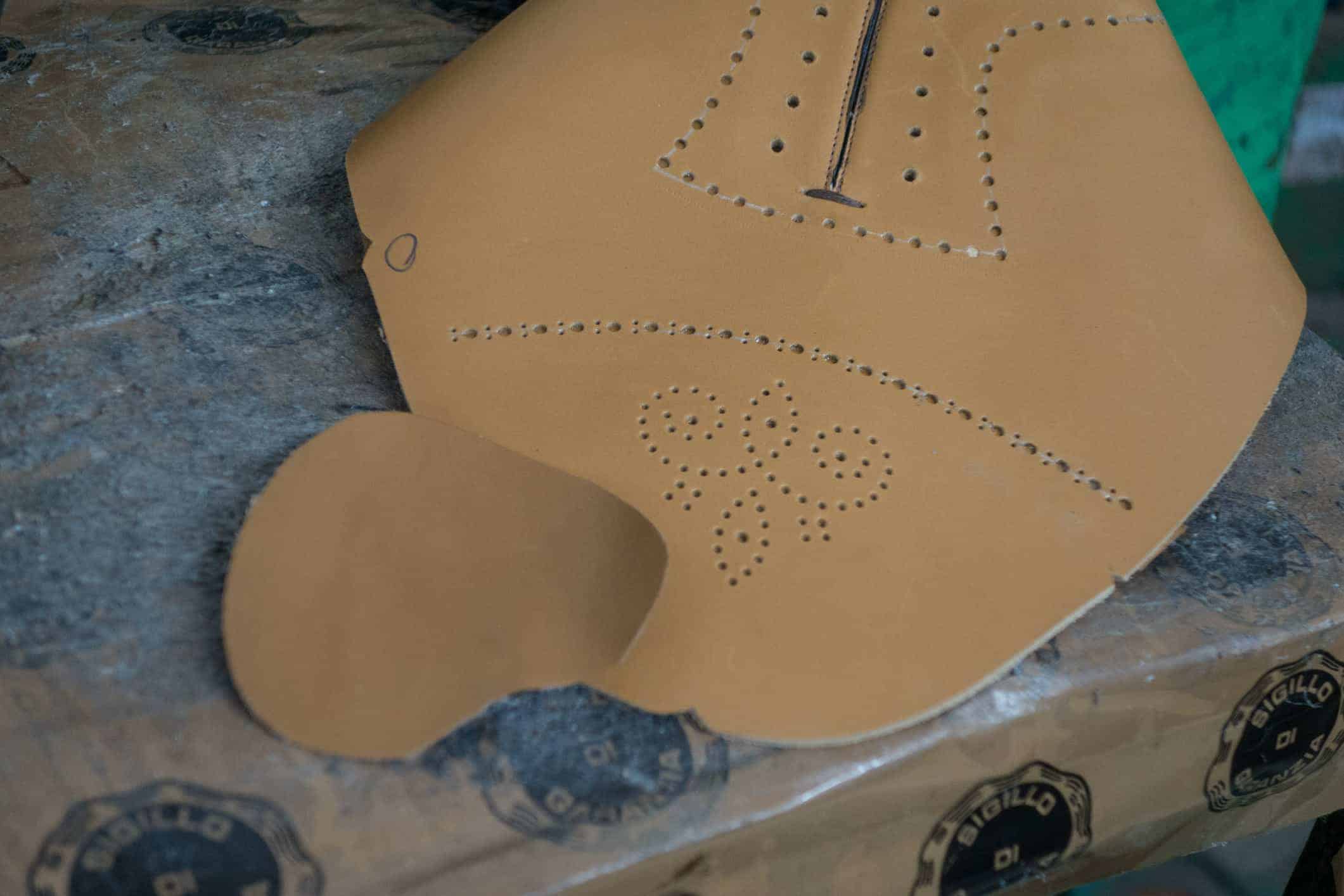 A wholecut is in addition to the small things you can do for the shape at the seam at the back otherwise completely flat. 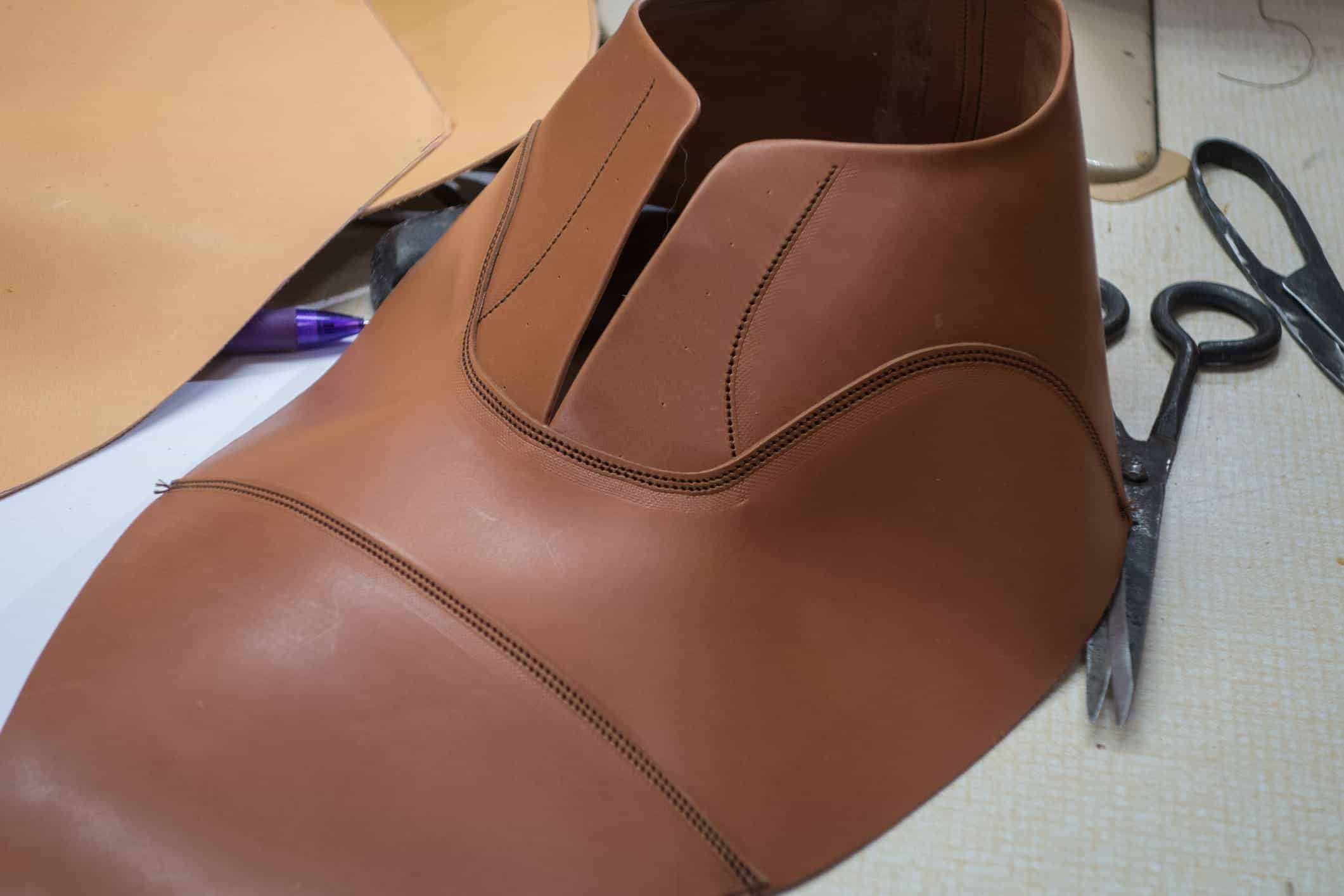 While a traditional oxford pattern can be made so the upper leather follows the shape of the last already in advance, so to speak, which can be seen in how the upper stands up here when the parts are sewn together.