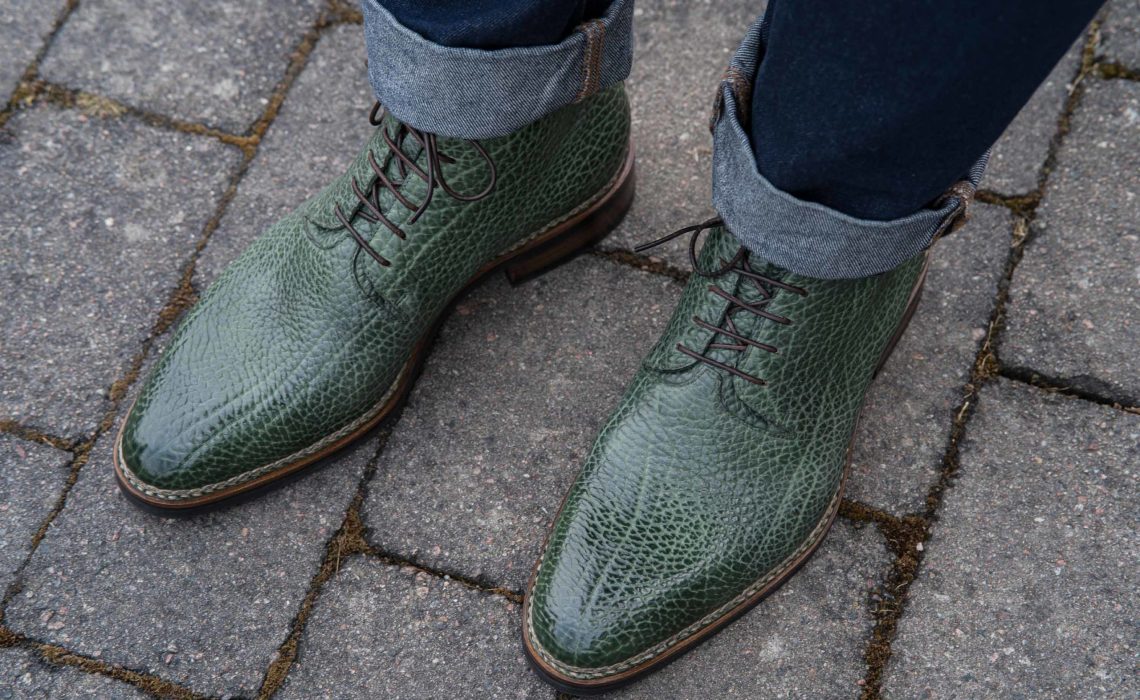 Zonkey Boot has been around for over a decade, yet still remains a bit of a hidden gem for many. It’s kind of a mystery to me, since it’s a brand with a distinct own character not really found from any other brand, making hand welted and Norvegese stitched shoes of excellent quality. Here’s a substantial review of a seriously cool green wholecut derby boot. 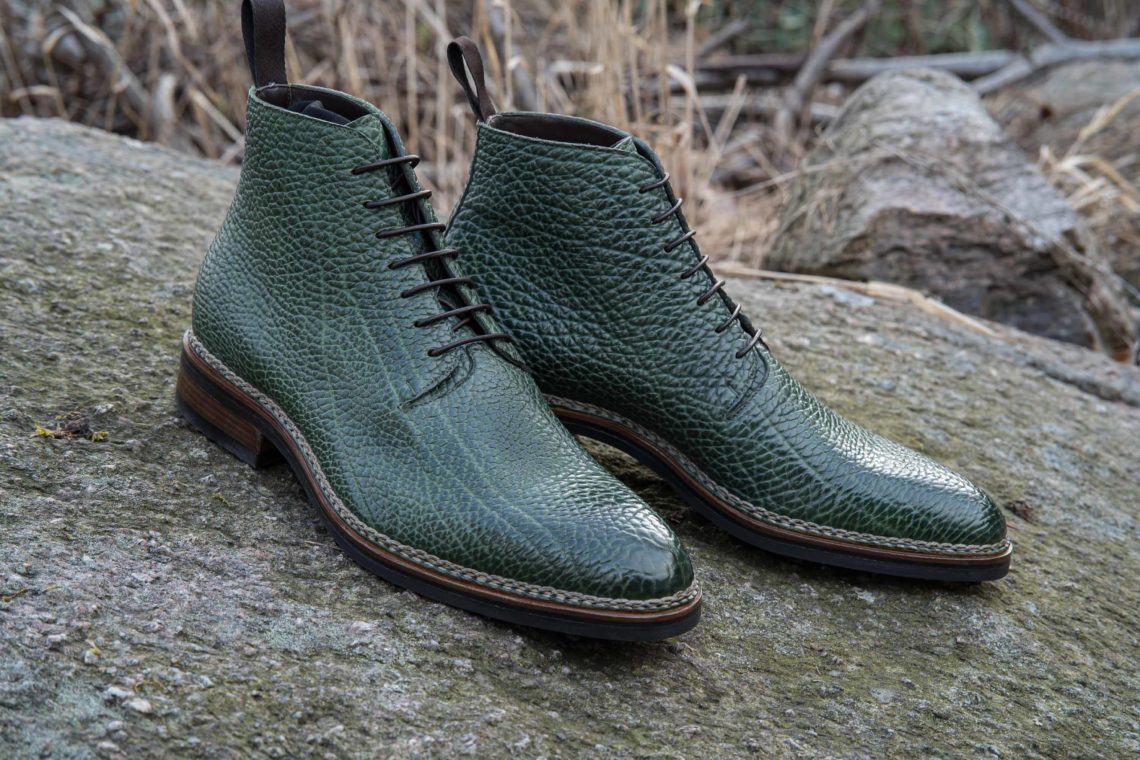 The boots to be reviewed.

Zonkey Boot was founded in 2010, by the couple Alexandra Diaconu and Michael Rollig. The Austrian Rollig had previously set up Saint Crispin’s, the famous premium brand based out of Austria making their shoes in Romania. With Zonkey Boot, Michael Rollig went southwest instead of southeast, and works together with a workshop  in Veneto, Italy. 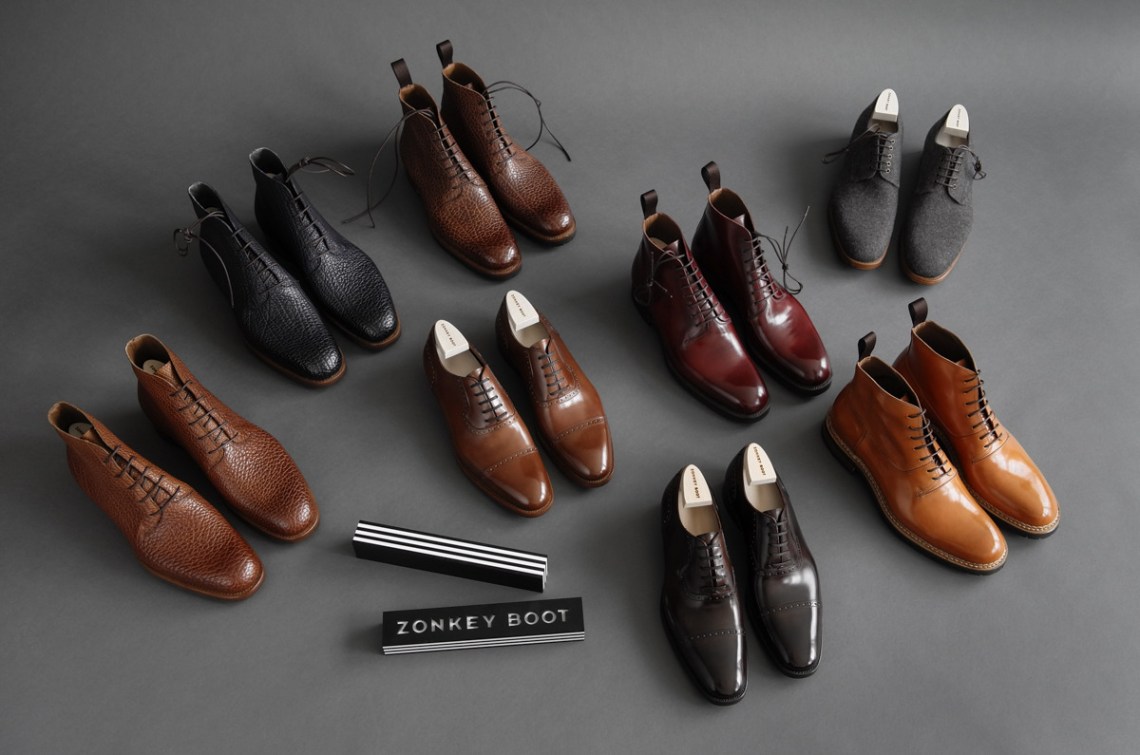 Zonkey Boot have a very distinct personal style, with a focus on more casual models with slightly special patterns and a lot of interesting leathers like for example shrunken bull that my pair is made of, so called “russian calf” and even elephant leather (CITES certified). They also have a few models with hand stitched uppers, which certainly is unique stuff, which incredibly enough doesn’t cost more than the regular models. The shoes are hand welted or with hand braided Norvegese stitching, and then with machine stitched outsoles. 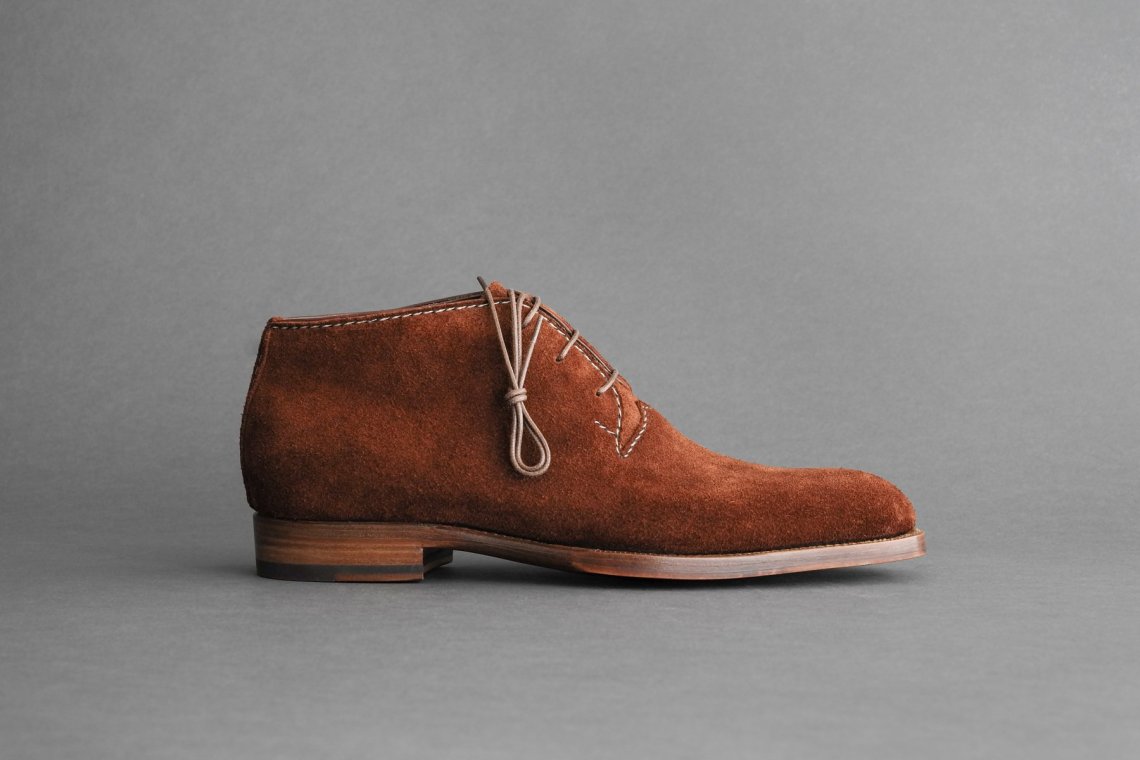 Zonkey Boot is available to order from their own website, they have about 70 different models, both boots and shoes. They are displayed with excellent photos, and with good information. They also have a highly flexible MTO service where you can make a lot of things, check out their lookbook of previous MTO’s to understand what I mean. Upcharge for MTO is 30%. They also have a few selected retailers around the world, mainly in the US and Asia.

For my pair, given that I’ve tested the Classic last before and knowing that it didn’t really fit me perfectly, Michael offered to make me a pair on a personalised version of the lasts. So I sent my measurement, what I wear in other makers RTW etc, and they did a Made to Measure solution where the RTW Classic last was modified to fit me better. They used the final uppers made up to “welted stage” (although here just a temporary sole put on), which was sent for me to assess the fit. Some modifications were needed, quite a bit actually, so was a bit nervous of how the final pair would end up. I believe it’s possible for others to get modified lasts, cost would vary depending on how big changes are needed. The model I chose is normally made on the Sailor last, but personally I’m not a fan of that, Classic last is definitely the last from Zonkey that is most to my liking. 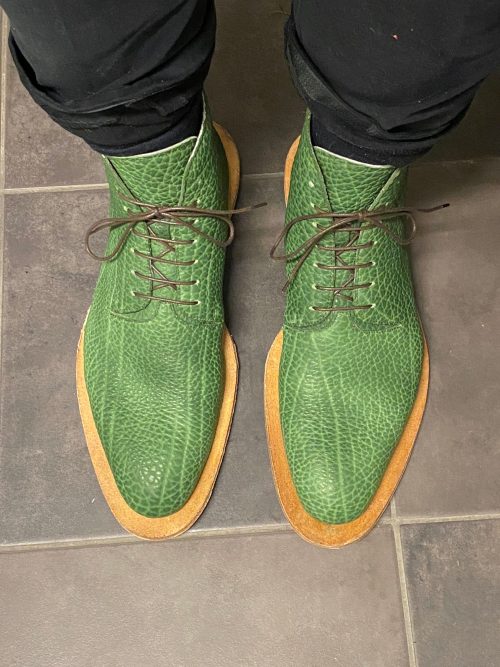 Fittings for my pair, with the final uppers just with a temporary sole attached (the photo was taken to show fit, hence the rolled up trousers). The fitting shoes were too small in many areas, so changes were needed.

These are a version of the 231 Marco Wholecut Derby Boots model, which Zonkey Boot has several make-ups of. It’s a bit of a special pattern, as you can see, where only the tongue is a separate piece of leather. Here then on the round toe Classic last, in their characteristic Shrunken Bull Leather, in the quite eye-catching colour Racing Green. They are made with a 360° Norvegese construction, and have double studded Vibram rubber soles. They are delivered in a clean, white shoe box with two shoe bags, and apart from regular shoe laces they also comes with special thick waxed leather laces as an option. 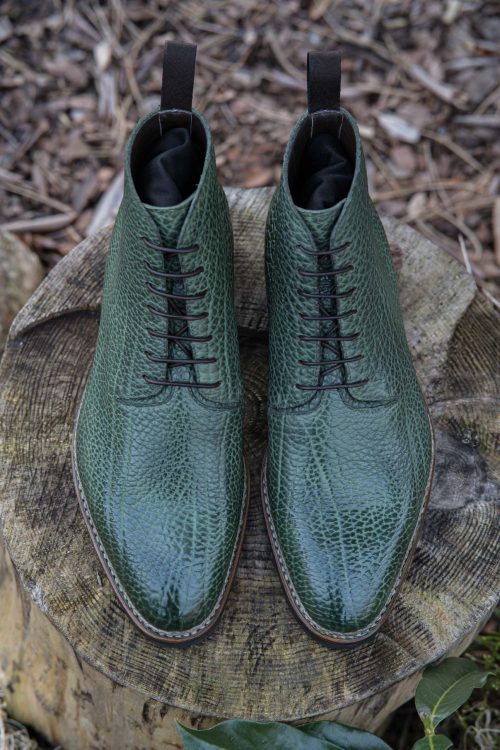 The Classic last works really well also for this type of boots, in my opinion. 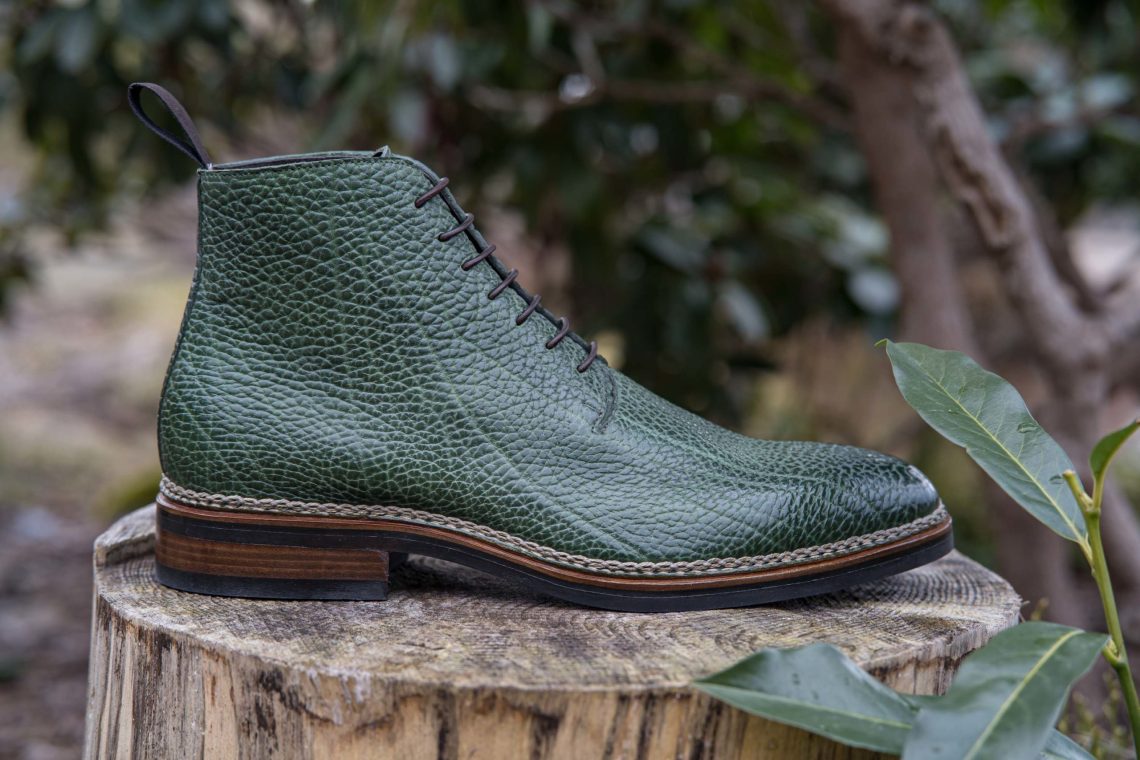 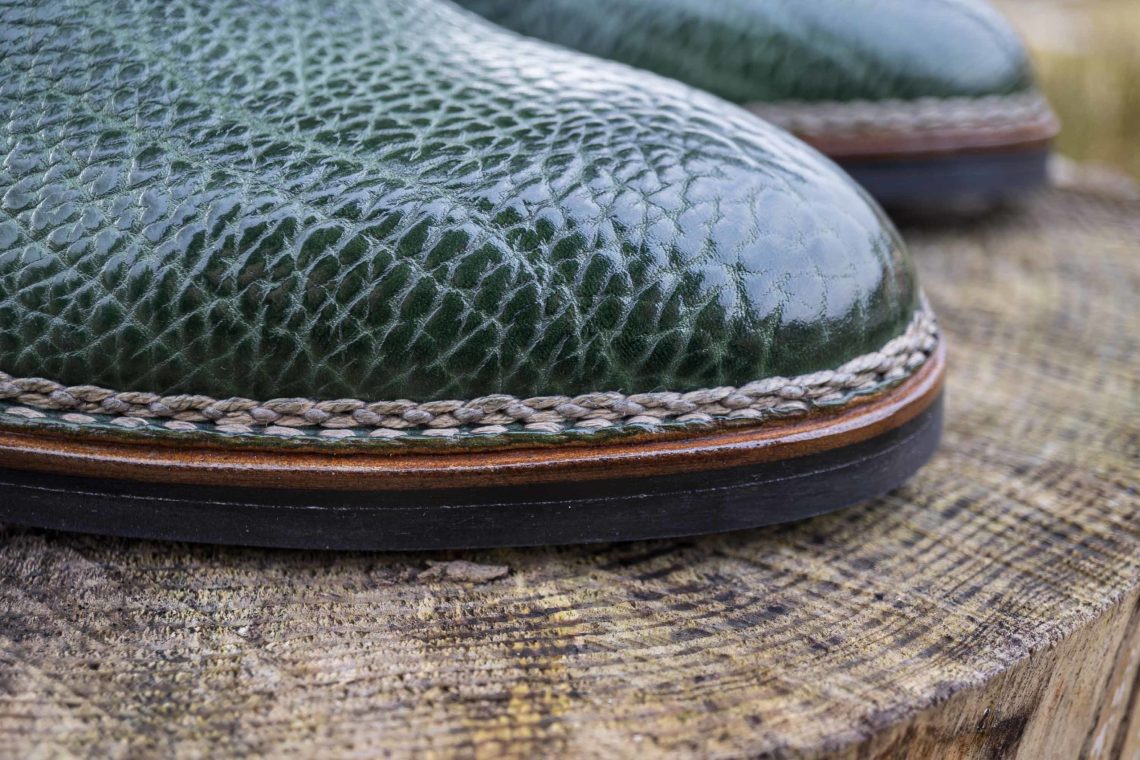 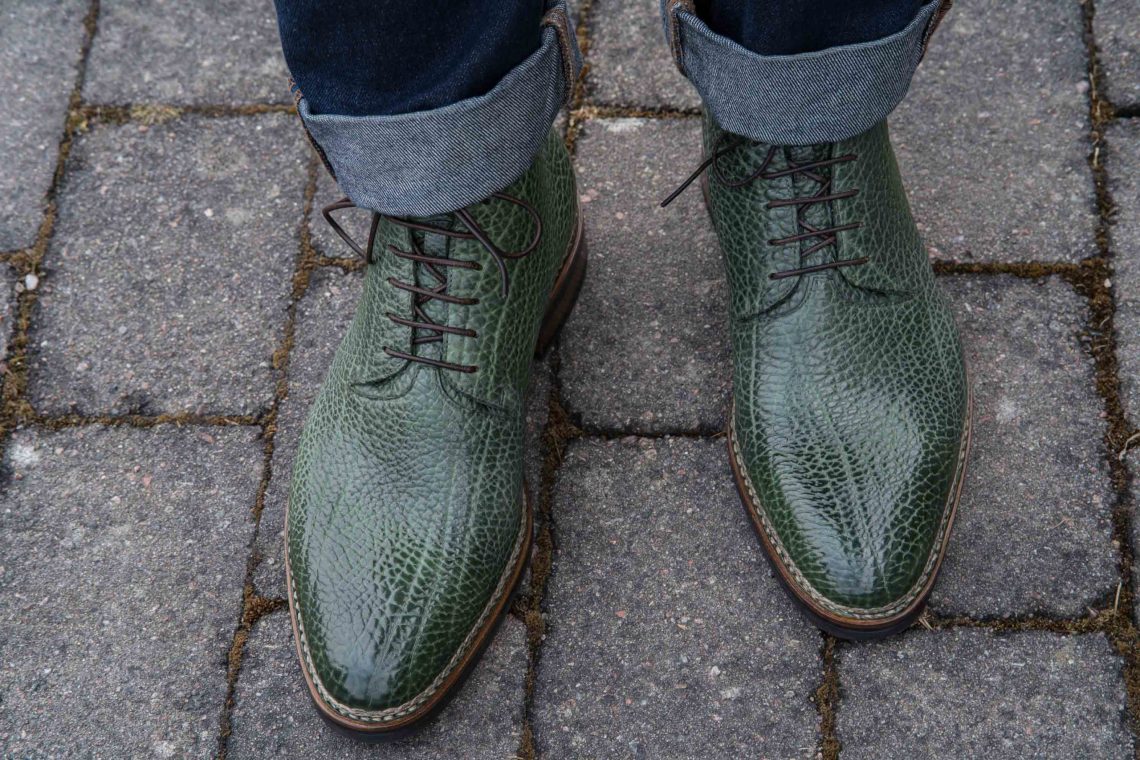 All Zonkey Boots shoes are hand welted or as here with handmade Norvegese construction. Here a braided stitching is attaching the upper leather to a 4,5 mm thick insoles, and a machine-made sole stitch is attaching the outwards folded upper leather to first a leather midsole (sort of replacing the welt) and then a thin rubber midsole. To this, the rubber outsole from Vibram is cemented, and when being resoled you remove this outsole but keep the stitched integral construction intact. The heel stiffener is made of real leather, which conforms to the feet well and is in general used on premium welted shoes and bespoke footwear, with toe stiffeners of celastic (plastic impregnated fabric).

The upper leather certainly deserves some attention. It’s made from fully grown bull hides, and then shrunken to enhance the natural character of its surface. As you can see on the image below, it’s a thick hide with a vast part of the corium part kept, and since it’s not embossed the pattern is highly irregular giving it a lot of life.  It’s uncoloured chrome tanned crust leather, which Zonkey Boot hand dye themselves. This is done in several stages, first a brighter green dye is used and this is then muted with various treatments until the final Racing Green shade is established. A difference from embossed grain leather is that here you can really see the pores still, yet being rather dense so it’s quite easy to shine. The creasing after wear is normal, though you barely see the creases due to the grain pattern. To not make the uppers too thick, they use a rather thin lining leather. 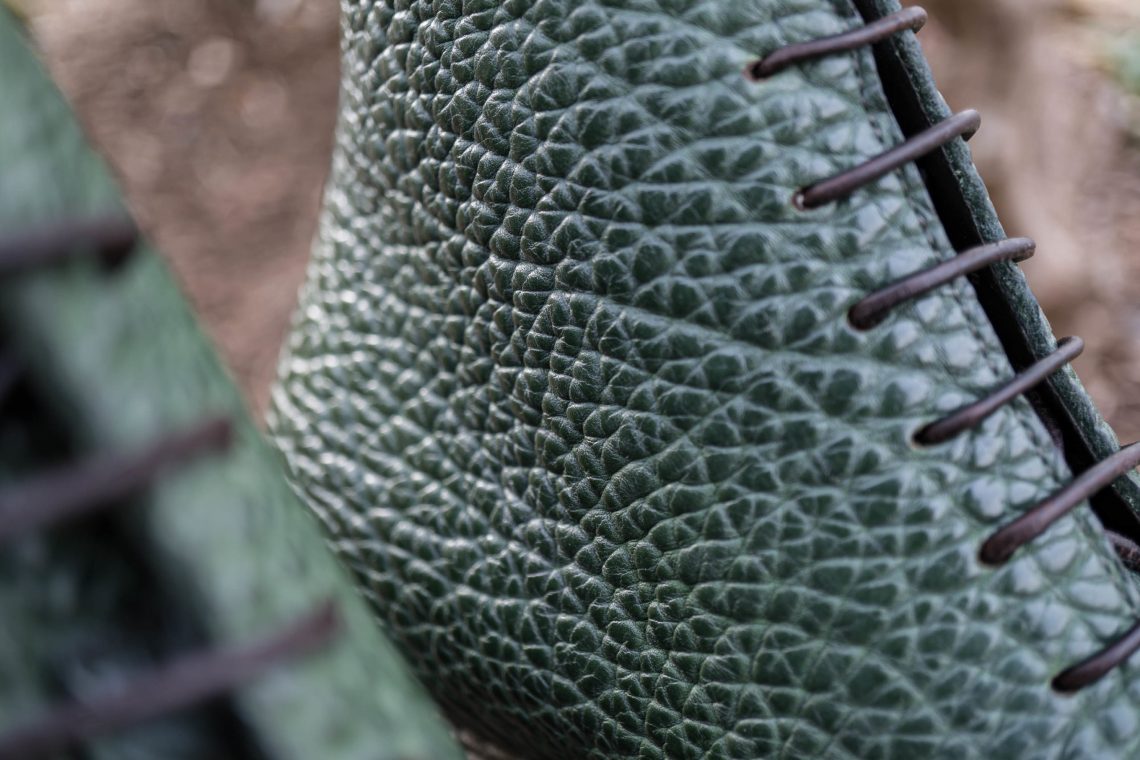 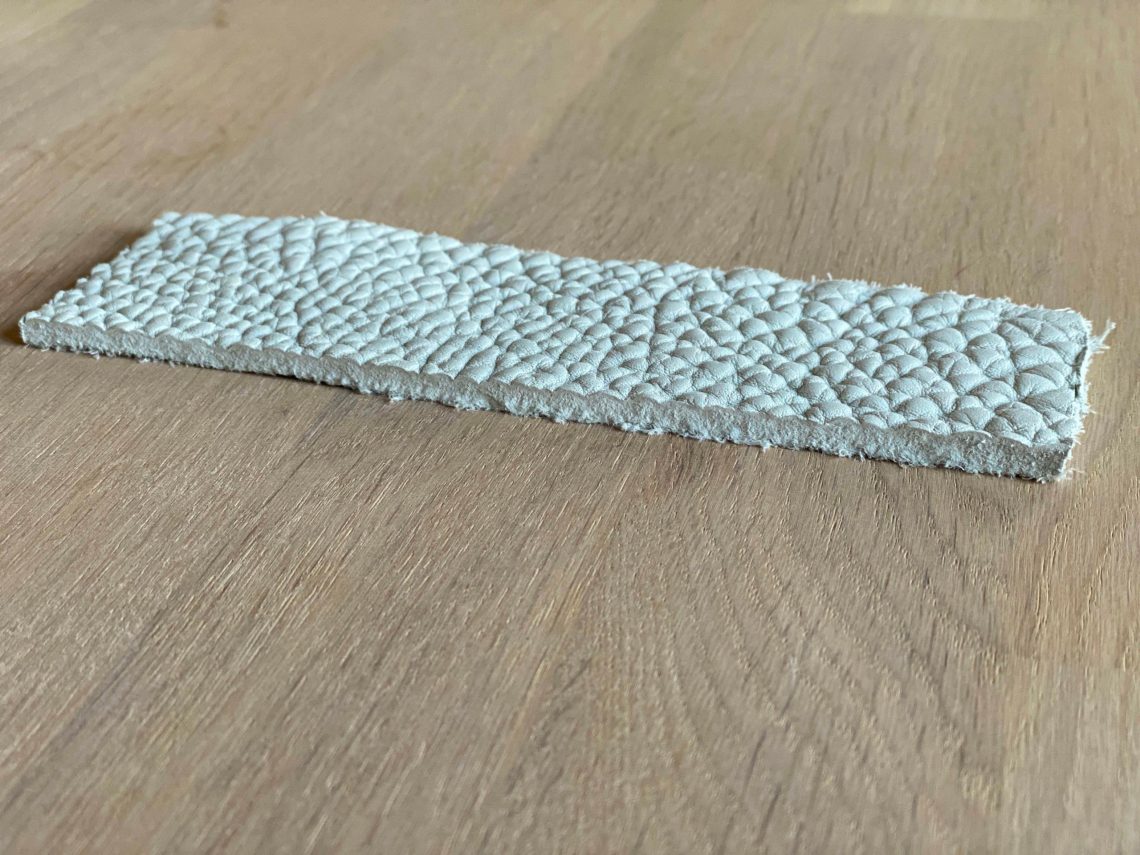 A picture of a leather swatch showcasing how it looks undyed, in plain grey crust. Very thick, with much of the corium left. If you look close you can see the pores, as on a regular smooth leather.

The make certainly is solid, what one can expect of shoes at this price range. The braided stitching is neatly done with the contrasting thread. The only sort of issue one can find on the shoes is that there’s too big of a gap between the braiding and the sole stitch in one area on the left shoe, not being as close and perfectly aligned as it should be, where the sole stitch is far out on the outwards folded uppers. You see it on the close-ups here, but not really something you notice otherwise, and given that one rarely need to touch that seam on this type of construction where one just remove the rubber outsole, and there’s a decent amount of edge left of the leather midsole to take a couple of sanding edges evenly before one reaches this area, it shouldn’t be a problem at all. The area with a bit too much space between the braiding and the sole stitch. How the pattern is solved at the tongue. Here you  can also see the thicker waxed leather laces. 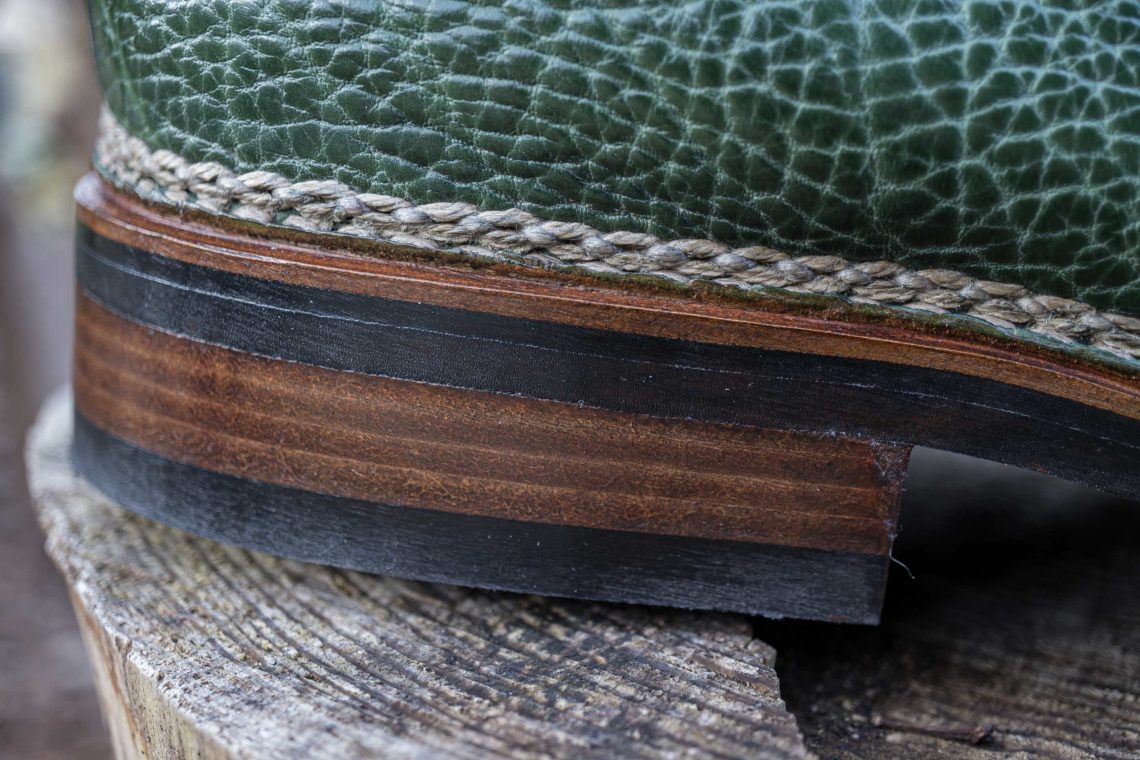 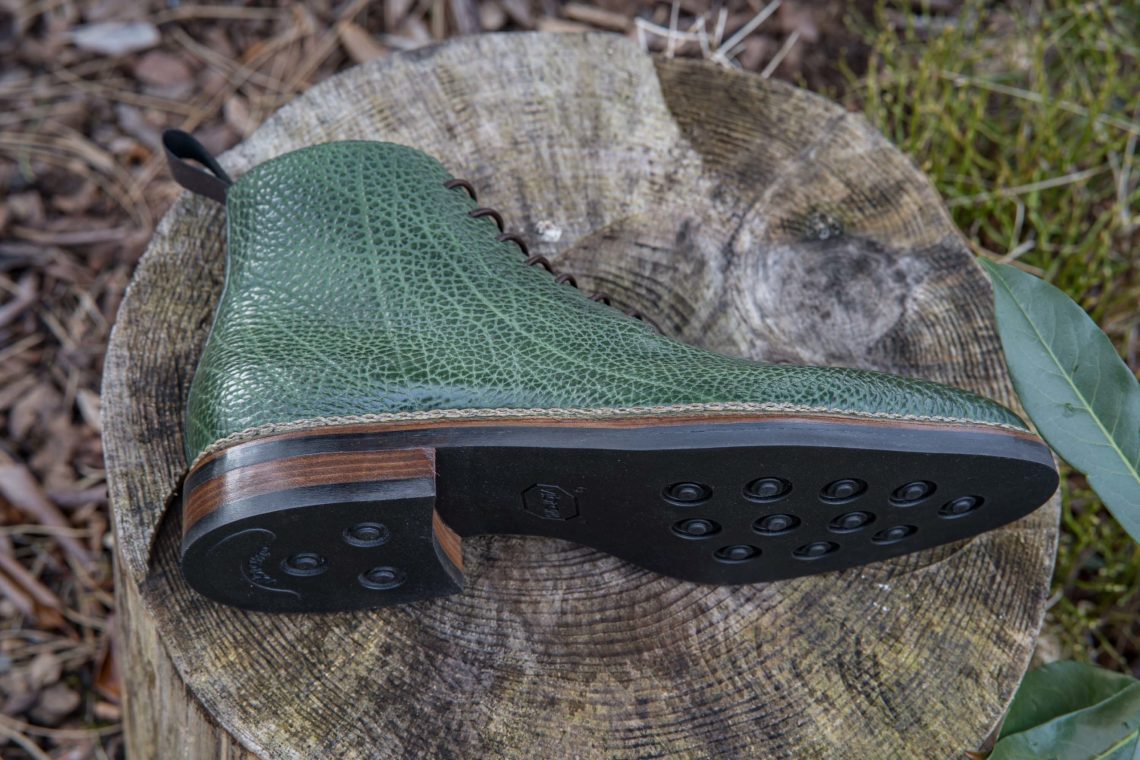 Sole and heel edges are nice and smooth, even if rubber soles. Now, as mentioned, these are a personalised version of their Classic last, with a number of modifications done to suit my feet. Therefore I won’t go much into comparisons with other brands etc on how these fit. What I can say is that after the initial issues with the test versions of the shoes, basically all was addressed and solved for the final pair, and they do fit very well. Just enough room for the sensitive areas for my feet, no excess material in general, and similar to Saint Crispin’s the arch support is really good for having generic lasts as base, although there’s no prolonged stiffeners following forward in the arch. The boots with the modified lasts fits me really well. Here they are after a number of wears, and as you can see you almost don’t see the creasing, the distinct grain pattern hides it.

As always when I do reviews of shoes I make sure to wear them at least 5-10 times before writing the review, since I see no point in making any assessments before that. After all, it’s shoes that are to be reviewed, and they are meant to be worn. Once you’ve broken shoes in you will know much more about them in many regards, and next step of “knowledge” comes after a few years of wear really (I usually generalise it with saying there’s five steps when you gather knowledge, where you can say more after each one, and as always the more you know about shoes the more you can say on each step, so to speak. These are: 1. Looking at photos. 2. Seeing and handling them in person. 3. Trying them on. 4. Wearing them enough times to break the shoes in. 5. A year or few of wear, when you’ve really worn on soles and heels etc. One could add a step 6 as well when shoes are worn out sort of, but well, if it’s good quality shoes it’s so individual what happens up until then so difficult to make comparisons.) But if you are to make a review of a pair of shoes and want to be able to share as much as possible for your readers / viewers, I can’t really understand why one don’t at least make sure to wear them a few times and break the shoes in and then do the review, instead of hurrying to get that text or video out after only trying them on briefly, if even that. Due to this reason, it has happened a couple of times that I have returned shoes that were sent to me to be reviewed, since they didn’t fit me and I couldn’t wear them properly to be able to make the amount of assessment I feel is needed for a proper shoe review.

These boots from Zonkey were surprisingly easy to break in. The shrunken bull leather may be thick, but it’s also very soft, and likely having the second midsole in rubber makes it softer from the start than if it would have been another leather midsole. For me, who in general isn’t a big fan of boots since I like to have my ankles free, it works well with a softer shaft as one get here with this leather. Already after a couple of days of wear they felt nice and comfy, and now after 6-7 wears they are certainly fully broken in, and are one of the most comfortable boots I own. 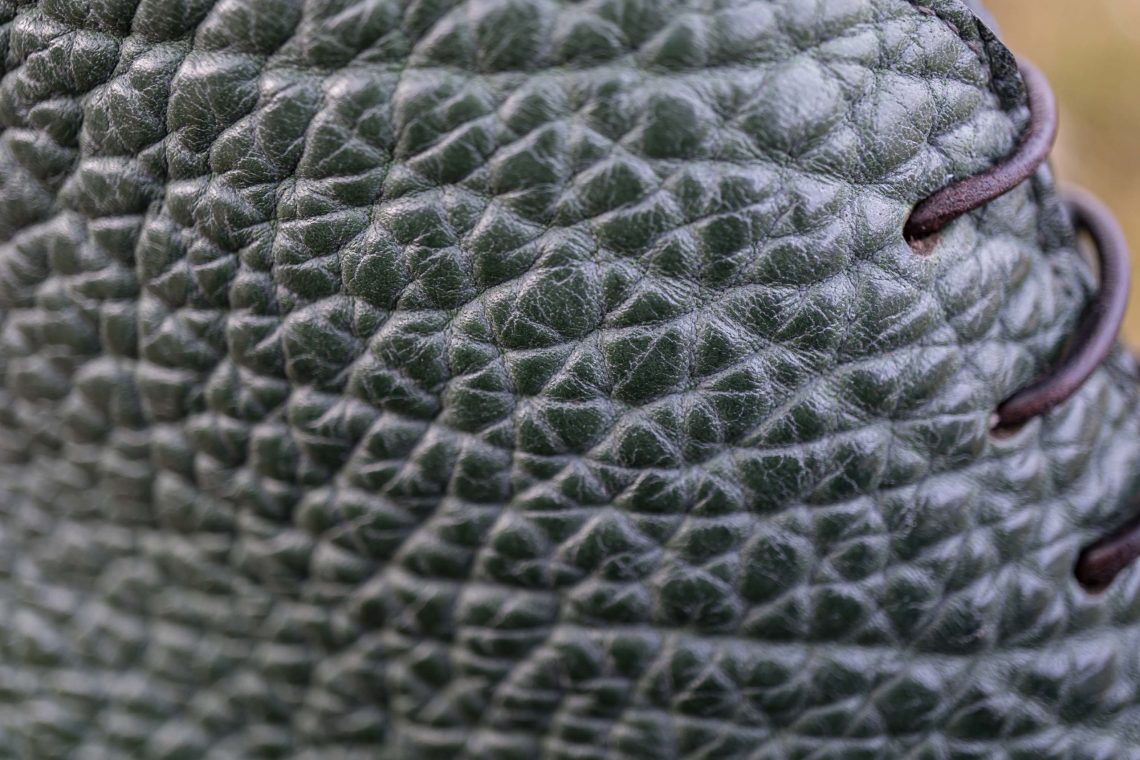 A thick yet soft leather.

Zonkey Boot sure makes fine footwear. It’s a brand that has its fans, but it deserves even more recognition than it gets. They do a good fusion between classic and more casual styled shoes, highly wearable in today’s day and age. The material and make is top class, as expected in this price range, and for those who like me aren’t the biggest fan of boots I can highly recommend this model and leather from Zonkey. 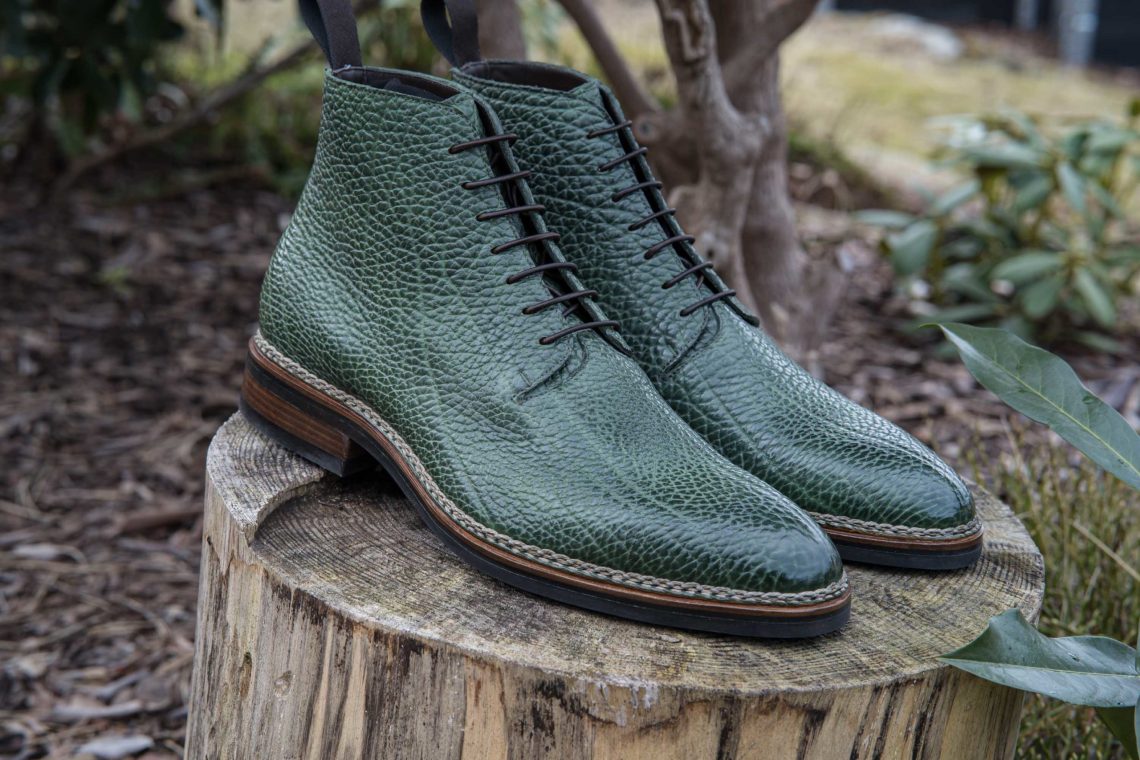 We finish things off with some more photos of the shoes. 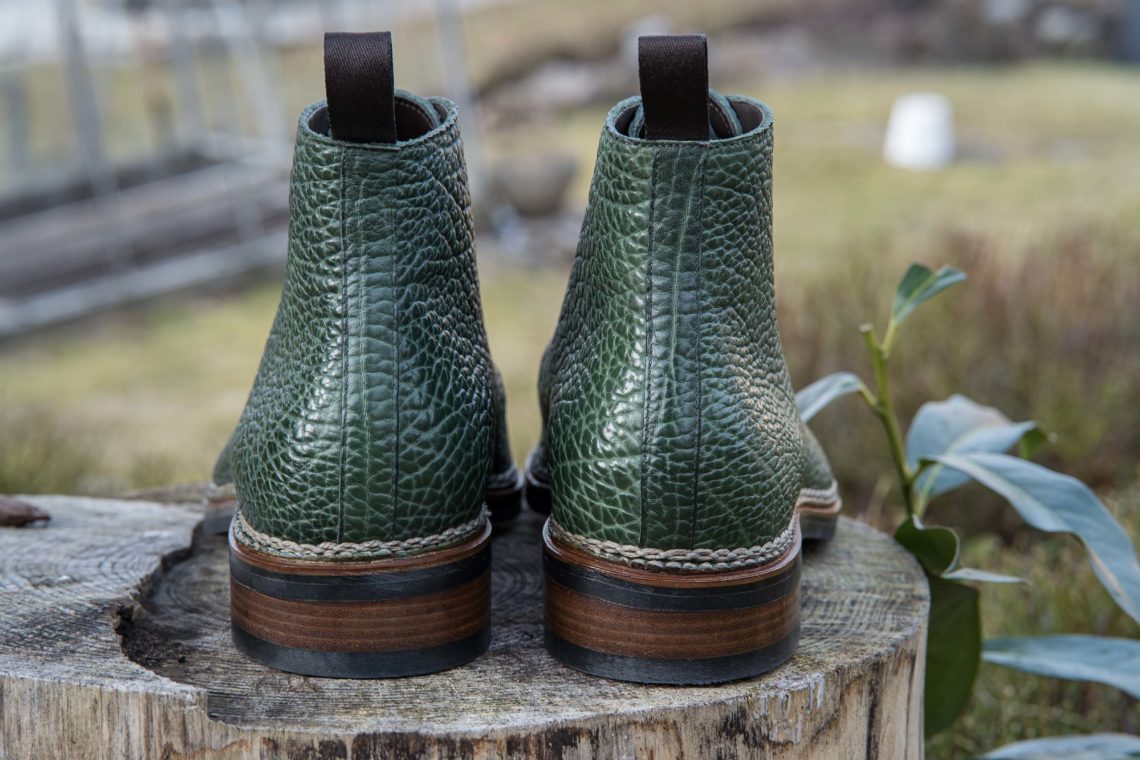 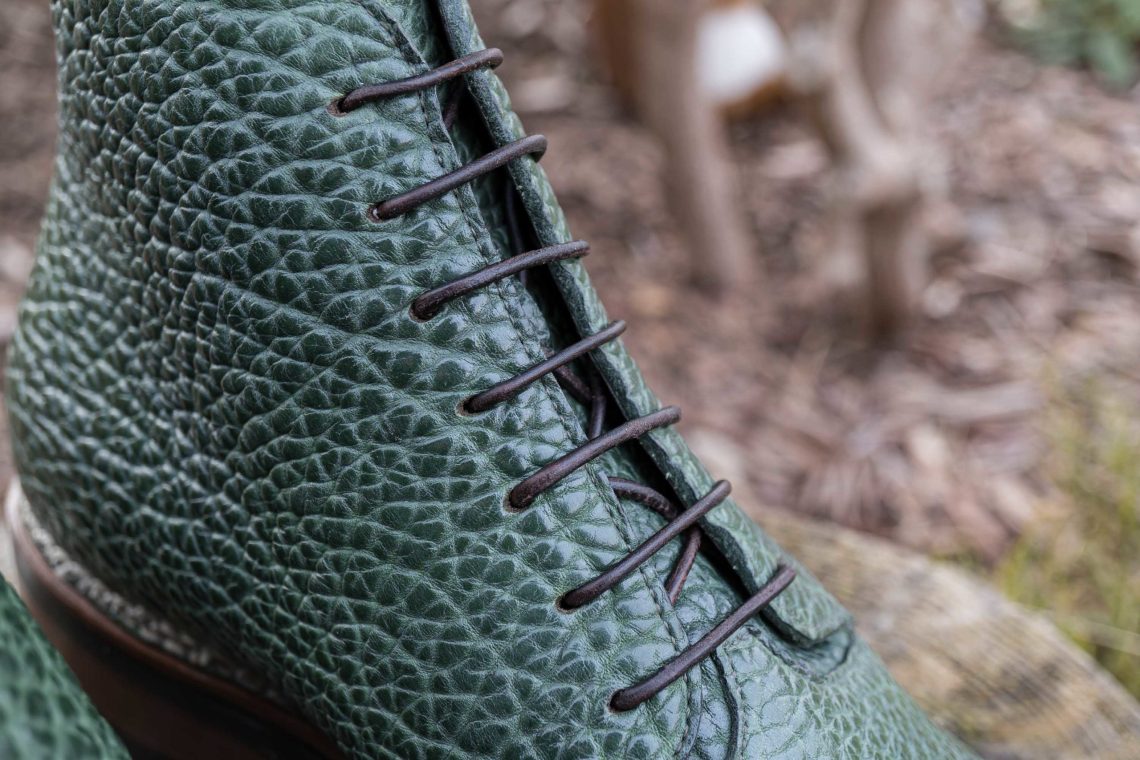 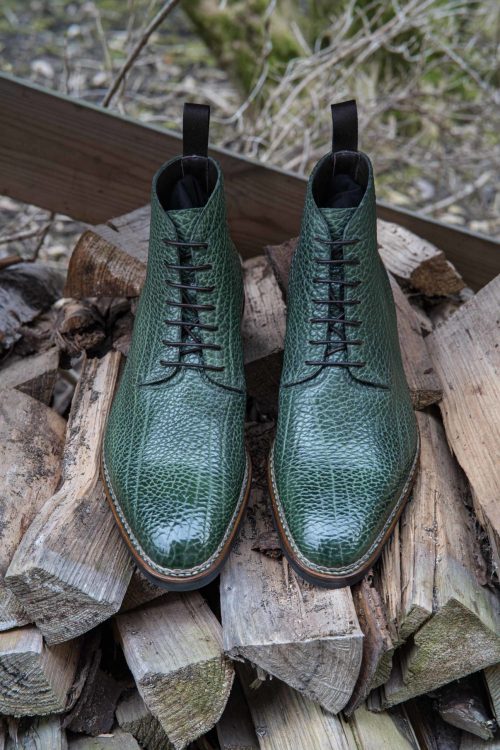 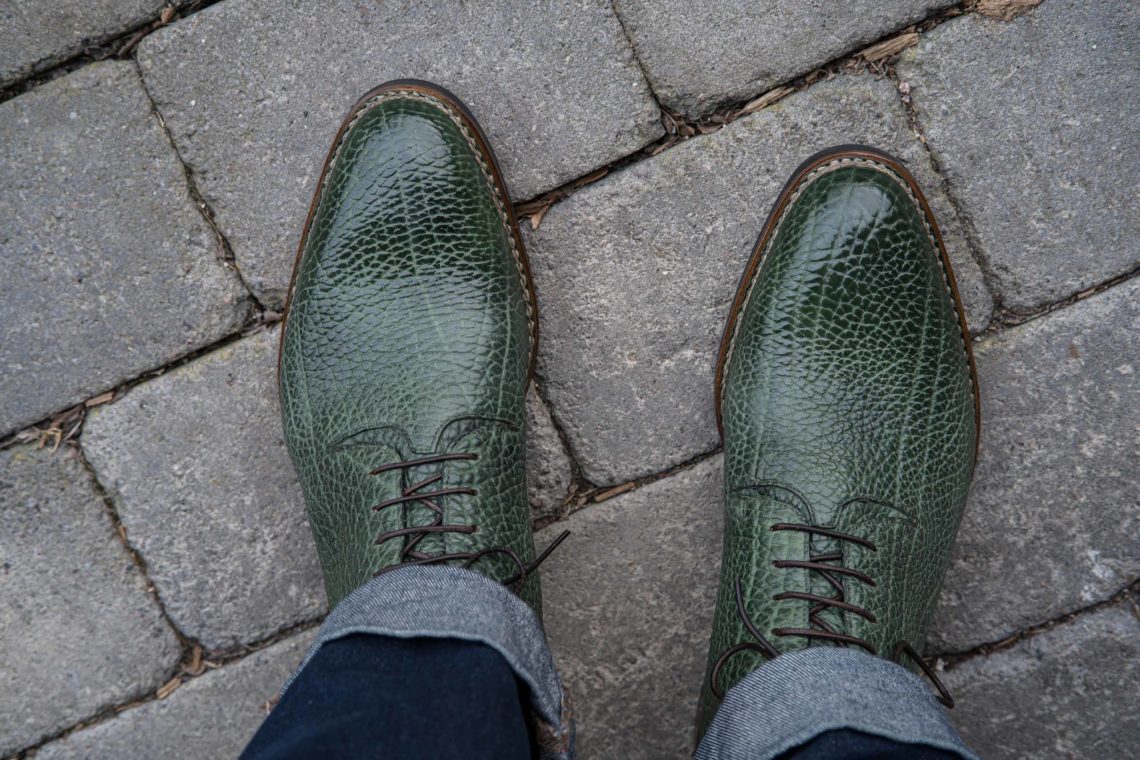 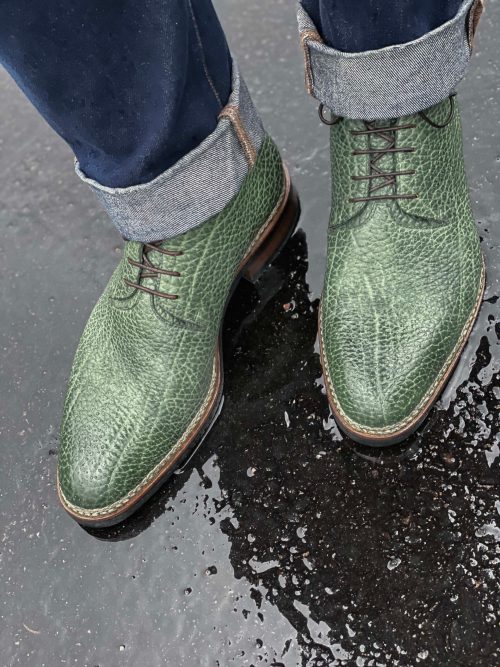 In some heavy rain.