One of the largest menswear companies in Scandinavia, Oscar Jacobson, is launching a new line of welted shoes, made in the Spanish shoe mecca Almansa. The ambition is to get more men to wear good shoes, reaching men who otherwise aren’t necessarily that into shoes.

Oscar Jacobson is an almost 120-year-old firm from Borås, Sweden, and in their domestic country and Scandinavia it’s an institution in classic men’s fashion, which several times throughout history has updated itself just enough to stay relevant, without losing its history. Unlike many of their competitors, they have always kept a relatively steady course forward, instead of swerving this way and that, a little too anxiously. It therefore makes perfect sense that Oscar Jacobson is now investing in its own line of welted shoes. Aside from an all-too-brief venture by J. Lindeberg with shoes from Alfred Sargent and Morris’s half-baked line of Italian welted that they ran a few years ago, it’s been surprisingly thin on the ground on this front here in Sweden.

Up until now Oscar Jacobson has mainly run on a few Blake stitched models, and of the slightly nicer Blake/Rapid-stitched models that they actually had some of for a while, only one wholecut has lived on, these were developed many years ago with the Swedish-Italian brand Italigente. Now they have made a more solid approach, and developed a new line of welted shoes. This together with a factory in Almansa in the Albacete region, which is Spain’s equivalent to Northampton in England or Marche in Italy. The main centres of each country’s shoe industry. 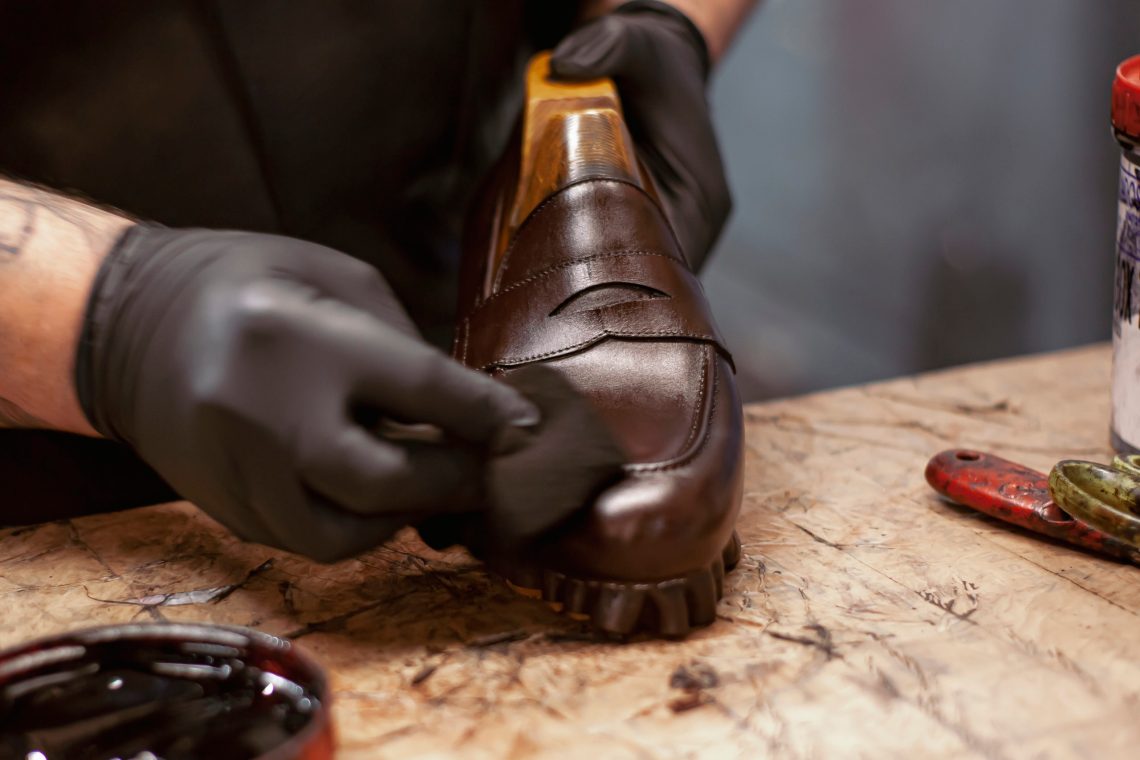 From the production in Spanish Almansa. The cork filling is put in place, in the shoes that have 360° welt, standard for Spain. The lock stitch is made in a Rapid sewing machine. The ambition with the new line of shoes is to produce products that can last for a long time both in terms of design and quality.
– We have worked closely with the retail side of the company to really match all aspects that our customers want, both in which models to focus on, how the shoes are built and the fit, says Noah Areblad, product developer at Oscar Jacobson.
He says that the factory they work with has been very flexible during development and everything has been able to be adapted to the company’s wishes in both large and small ways.

Now, initially, they are releasing a classic plain cap toe oxford and a penny loafer, both of which come in black and dark brown calf leather and are equipped with a version of the so-called city rubber sole, where the front is made entirely of rubber and joined with a section of veg-tanned leather from the waist and back. An oxford with a plain toe in patent leather, here with a full leather sole. And then a chelsea boot in dark brown leather and a version of Dainite rubber sole. There are three leathers used, the chelsea has a slightly chiseled toe, the oxford a really classic oxford last with round elegant toe, and the loafer also with classic round toe with slightly higher toe box. These are clearly British-inspired lasts, which makes sense considering how anglofied Swedes are. Plain cap toe oxford, which is available in both black and dark brown leather.

The shoes are, as mentioned, Goodyear welted made from a calf leather from a Spanish tannery in the Murcia region (except then the patent shoe), they have heel stiffeners in leather board, and for added comfort the insole is covered with a thin layer of ortholite foam that is meant to breathe.
– For our customers, comfort is very important, and many can be a little put off by the fact that many welted shoes are perceived as hard, especially initially. That’s why this is a great solution,” says Noah Areblad.

This is, of course, where Oscar Jacobson is having a big impact, in being able to reach out widely to far more than shoe-obsessed men, at least in Scandinavia. That’s why it’s gratifying that they’re investing in better shoes, which may get more people here to put proper welted footwear on their feet. Prices are about €250 for the oxfords and the loafers, patent shoe and chelsea go for €300. Noah says this is just the beginning:
– This is an initial range should be said, we are soon releasing an Albert slipper from another manufacturer in Almansa, and in the future more welted models. Chelsea boot with wholecut-cutting, which is really nice at this price. The rubber sole of the chelsea.