Most people have a fairly decent know how about how shoe sizes works, the difference between for example the European scale and the UK scale, and so on. It may still be of interest though to immerse more in the background and the facts surrounding how shoe sizes works. That’s what I do in this post.

The grading of shoe sizes go way back in time. Already in ancient Rome in the centuries around the beginning of our era the foundations of the systems currently used in the US and UK the dimension of the length of the shoes were established. It was when shoemakers realised that three barley corns were as much as an inch, and they then began to use it to systematize sizes. But it wasn’t until the year 1324 that the sizing system became official, when the British monarch King Edward II made a royal decree that three grains was equal to one inch. Over time various new rules has been added to the system, and it has also been split into several different types of systems for grading shoes length. When the making of footwear onwards the second half of the 1800s was increasing in scale, it was very important with standardisation, and since then, no direct changes has been made to the standards for how to grade sizes.

Important to note is that what we today call shoe sizes only refers to the length, width sizes run parallel and have their own systems, but is not included in what is now commonly referred to as a shoe size. Also worth noting is that since it’s only the length of the last that is measured normally, how long the last actually feel can vary a great deal, since for example different toe shapes makes the feet come more or less close in various places of the front.

Here I only go through the systems which are common in the Western world and for classic shoes. There are other systems that I don’t go into more . One example is Mondopoint which is an ISO standard and centimeter-based system for shoe sizes, and where the width is included in the regular sizing note, and where you print out the recommended foot size instead of the size of the last. Another is Asia’s shoe size system which is using the length of the lasts in centimeters straight up and down, usually with a half centimeters. 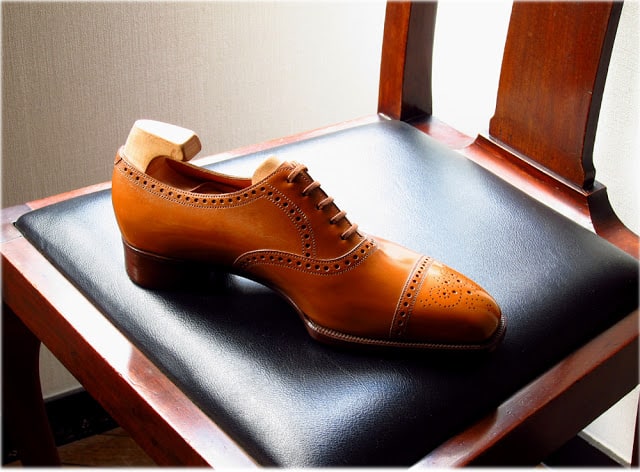 With Ready to Wear and Made to Order lasts standardizations of shoe sizes are very important, but unfortunately it’s quite messy. Picture: Yohei Fukuda

We start with the shoe size systems used in most parts of the EU. Naturally enough, it’s the metric scale that is the foundation of this system, specifically the measurement unit Paris Point that is 2/3 cm, or 6,6 mm. The easy thing with EU sizes is that it simply measures the length of the last (well, sort of at least), where size 42 is 42 Paris Points long, or 28 centimeters.

This is using the barley corn length measurement unit, so the difference between a full UK size is a grain, that is 1/3 inch or 8.46 mm. This is a little too large distance to be applied between each size,  therefore it’s almost always used with half-sizes. The UK size system is much more complicated than the EU system. Partly since the grading from a standard size zero is 4 inches long, or about 10.2 cm. Not only that, but at first you go up to size 13 for children’s sizes, then start on size 1 again. So size 1 for men sizes in the UK are thus in comparison with European sizes just below the EU32. In the UK system women’s and men’s sizes are the same.

Drawing of a last.

It uses the same base as the UK, so the barley corn is also the length measurement unit. The difference is that it starts with another size zero. One standard is that size zero in US is 3 11/12 inches, so that it’s 1/12 inch below the UK’s zero. But this is not always the case, in recent years it has become customary to start at 4 inches just like in the UK, but that the first size is 1 instead of 0. To complicate things further sometimes manufacturers have their own starting point for size zero that varies from the above, plus it is different where you start with men’s, women’s and children’s sizes in the US, and athletic shoes has other starting points, and so on. Quite a mess, to be honest.

Anyone who read the above can rather quickly conclude that it’s not possible to make any straight translations between the different systems, not even between the UK and the US. The only thing you can be sure of is that the differences between each size are the same length terms, but sometimes UK is correct to be converted one size below the US, thus UK10 is US11, but if the old traditional size zero procedure is used then UK10 is closer to US10,5, not quite but it rounds off. Plus then that there are several exceptions.

Since you have different measurement units the sizes of the EU end up with uneven sizes of the UK and US, which means that you may round off to the nearest size. Again, there is no set standard, although UK9 usually translates to EU43, it’s not always the case, and it can’t be done completely straight off since the scales are different. There simply isn’t a single conversion table that is absolutely right in all cases.

There are some tables that I think are better than others, however. The first below is good in that it clearly shows the differences between the various systems. For US the standard which starts at 4 inches with size 1 is used, so then it’s one size above the UK all the time for men’s sizes in regular shoes. The problem then is that it does not apply to all US footwear since certain brands are starting from a different place than in this table:

This is another table that is also quite good, which clarifies the relationship between inch and UK sizes, as well as the EU Paris Point unit to centimeters, and how it is impossible to make direct conversions between them:

A lasts width, in English often called fitting, is not about how wide the last is, but about the girth of the last. And the girth varies between width sizes over the entire last,  so not only its widest point, the area where the shoe bends at the ball of the foot, although it’s often here we measure and compare width. In terms of width sizes, there is no systematic grading of how much that distinguishes between one size and another. Also, the grading of width sizes are different between North America and Europe. In the US, basically all manufacturers have D as the standard width. The scale is as follows:
A, B, C, D (the standard width), E, EE, EEE, EEEE, F, G.
A is the narrowest width, and G the widest (In some cases, however, 4A, 3A, 2A, A, B, C, D, E, 2E, 3E, 4E, 5E, 6E). It’s an advantage to know that D is always the standard width, you always have this to start from.

Plastic lasts are made in a machine.

In England and Europe and in other parts of the world like Australia another scale is used that is slightly different to the US one. Back in the days it was commonly a numerical gradation here, but nowadays the graduation usually looks like this:
C, D, E, F, G, H.
The problem is that it varies between brands which width is used as standard, and since there’s no perfect proper distinction to what a width size is, it’s a bit of a mess. Most common is that F is standard, but there are many exceptions, such as brands like Crockett & Jones, Edward Green and Gaziano & Girling, who all have E as the standard width, while brands like RM Williams has G as its standard width. This means that one can not be absolutely sure what applies, but to learn or find out how it is for the manufacturer one is interested in. Nor are there any unit of measurement that applies to the difference between the widths (although 1/4 inch, or more than 6 mm, is a number that is like some kind of default, but too many deviate from that in order for it to be called standard) but generally (there are certain variations) a width size up is equal to the same width as a shoe in a length size up. So if one has a shoe size UK10 F (standard width), the width is equal to the same last in UK9,5 G-width, or UK10,5 in E-width. If there is an X adds to the width of the letter, it is a half step in width, thus FX is in between F and G in width.

This is is just a review of the systems that apply to shoe sizes, and is not about how to find the right size in these systems. I have written more regarding RTW shoes and fit in this article, among others.