Guide – How to prevent and remove mould from leather shoes 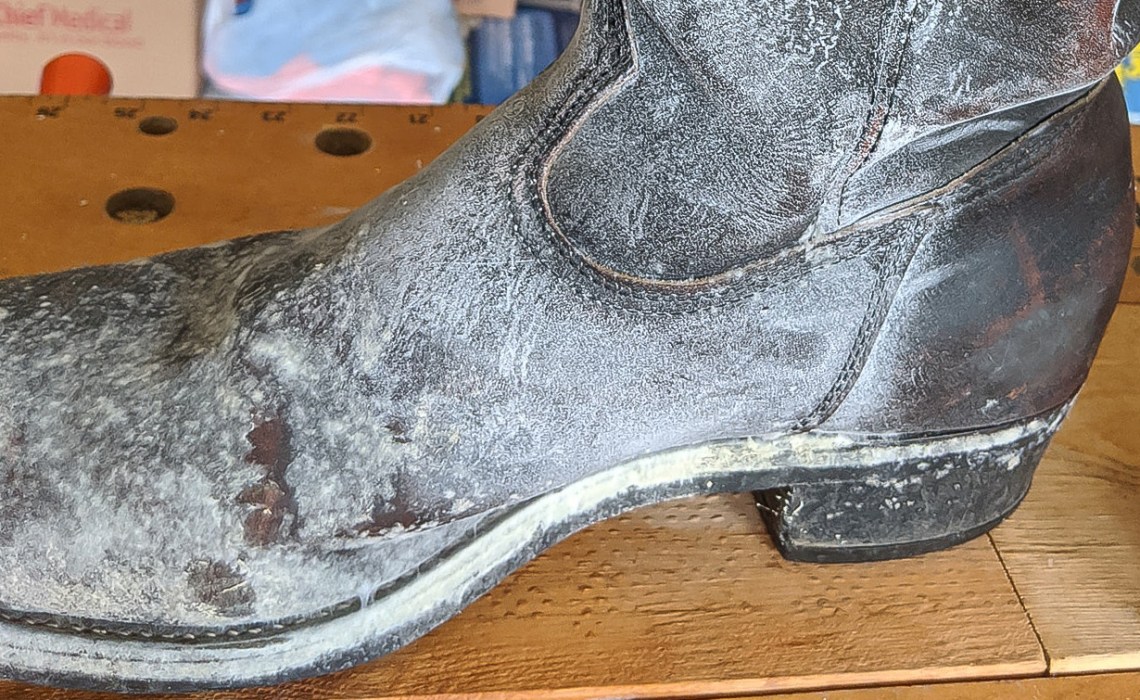 The formation of mould on leather shoes is a common problem especially in some parts of the world during some periods of the year, when humidity is high, but everyone can have mould issues appear on their shoes. Sometimes to a small degree but sometimes the whole shoes can become full of mould. Here I go through the reasons for why mould is formed, how you can avoid it, and how you remove it if you have footwear that gets affected.

Reasons that mould is formed on leather shoes

Mould is a collective name for a large number of fungus types that feeds off living materials. There are mould spores all around us all the time, but in some places they are gathered and can start growing to a larger degree, and that’s when they become problematic. On food it’s most common to find it, but as most know it can appear here and there. Among other things, on leather. 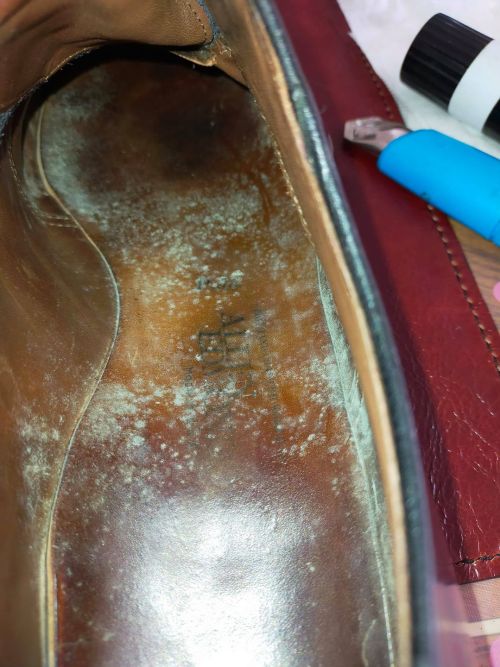 Mould formed in a pair of Allen Edmonds after they’d been out in heavy rain. Picture: Yap Han Wen / The Shoe Forum FB

When tanned the leather is treated in various ways to prevent the appearance of mould, but nonetheless it’s a living material, it also contains natural tannins and some natural waxes and oils to a small or large degree depending on leather type, it’s treated with other waxes and oils which is necessary to nourish it but also inevitably adds organic substances to the leather, and you can have stains etc. that can be another source for mould to grow on.

Then mould is most easily formed when it’s humid, dark and the air circulation is low. So, basically, to have wet leather shoes and place it in a sealed closet or similar is basically like begging for mould to be formed. Which leads us to the next part of this guide (focus here is on shoes, but basically goes for all products made of leather).

How to prevent that mould is formed on leather shoes

We have two main reasons that affect mold creation on leather footwear: the condition of the shoes, and the condition that they are stored in. Starting with the condition of shoes, if you’ve been out in heavy rain and your shoes are soaking wet, you really need to be extra careful. First, wipe them off with a damp dish cloth or similar to remove any dirt and residues. Do let them dry in an airy place, ideally outside during a sunny day (not always the case though if they’ve been soaked from rain, and they should not be outside in rain or during night since then humidity is higher), but inside in regular room temperature is fine as well. Do not attempt to have them dry faster on some kind of direct heat, like a radiator, floor heating or similar, it will stress the leather massively and in worst case dry up and crack. Make sure that air can circulate around the shoes, leave them laying on the side, standing on a non-even surface which lets air through, or solve a way to have them hanging. It’s quite common to find mould on leather soles, if they’ve become wet when walking in rain and stored on a flat surface with no circulation, it easily builds up since the soles often are dirty from much more than the uppers as well, stuff that mould spores likes. Here how they are stored when whet is key. 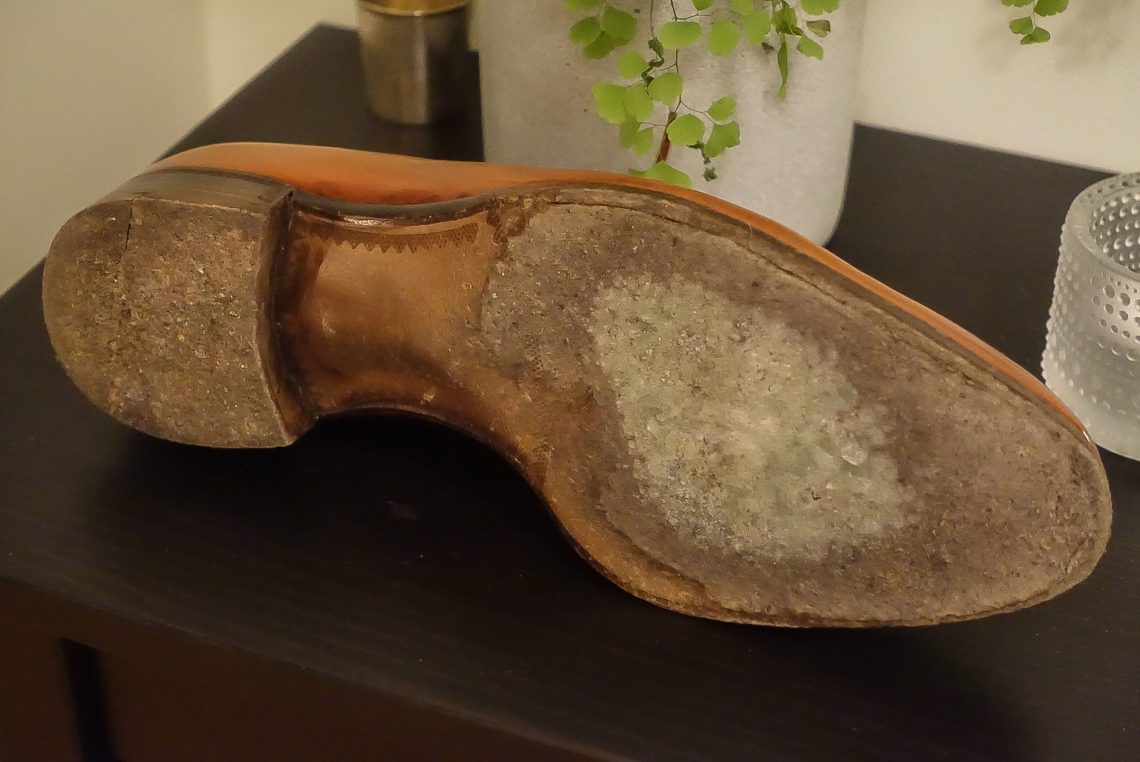 Leather soles where mould have been created.

For the condition to store shoes to prevent mould, there’s actually some common mistakes that is often done. Usually shoes are stored in a closed closet, which is not ideal since air can’t circulate in there. If you have them in a closet, try to create the possibility for an airflow, either simply by making sure to leave a door slightly open, or perhaps drill larger holes in hidden places. Also it’s best if they don’t stand on a solid flat surface, have a ribbed carpet or similar which lets air circulate under the shoes (read more in this article). 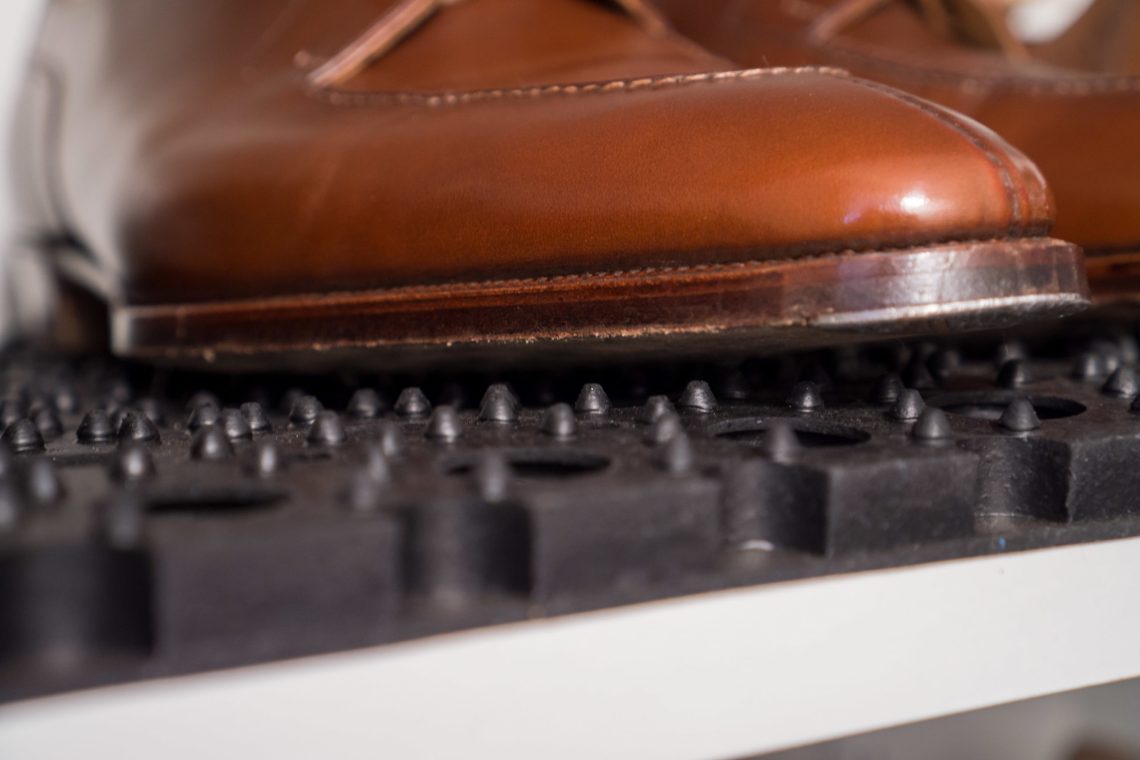 One solution to make sure air can circulate around the shoes is to have them standing on a rubber carpet like here.

A popular way to store shoes, especially during seasonal storage when they aren’t used, are in shoe boxes (read more about seasonal storage in this article). This can be problematic since that indeed is a dark space where air can’t circulate, especially if stored in for example a basement or similar moist location (should be avoided), which could mean that mould can be created. Make a few of holes in the boxes to make it possible for air to circulate, to make the conditions better, and always make sure the shoes are completely dry before you stove them away in a box.

What is good is that where one store shoes you have moist absorbers of some forms, that can attract moist instead of having the leather of the shoes do that job. Wooden shoe trees do this job to some extent, and is enough in cases where it’s just not too humid. For seasonal storage it could be good to add bags of cedar shavings and/or the classic bags of silica gel that you often find in packages you receive (don’t throw those away, put them in a box at home to have at hand when needed). In extreme cases, for example if you live in very humid locations, a dehumidifier can do a big difference, if it’s possible to solve in a practical way.

If you often experience problems with mould on your shoes, then you have to be more careful with all the things above. As mentioned, in some places of the world conditions are more humid and mould is more easily created, and it varies through seasons as well, and you can live in a house which has more problems with mould spores which will risk settle on your leather footwear. So you can learn when you have to be extra careful.

How to remove mould from leather shoes

It’s worth knowing that when you start to see mould, it has already been built up for some time. The first process is invisible to the eye, so when you start seeing the characteristically fuzzy, white (or sometimes black) coating, it has come a bit in its development. Take the shoes outside, since you don’t wont’t the mould spores to spread indoors, and wipe away all surface mould with a cotton cloth made damp with hot water. Do it carefully. Then let the shoes air dry, preferably outside. 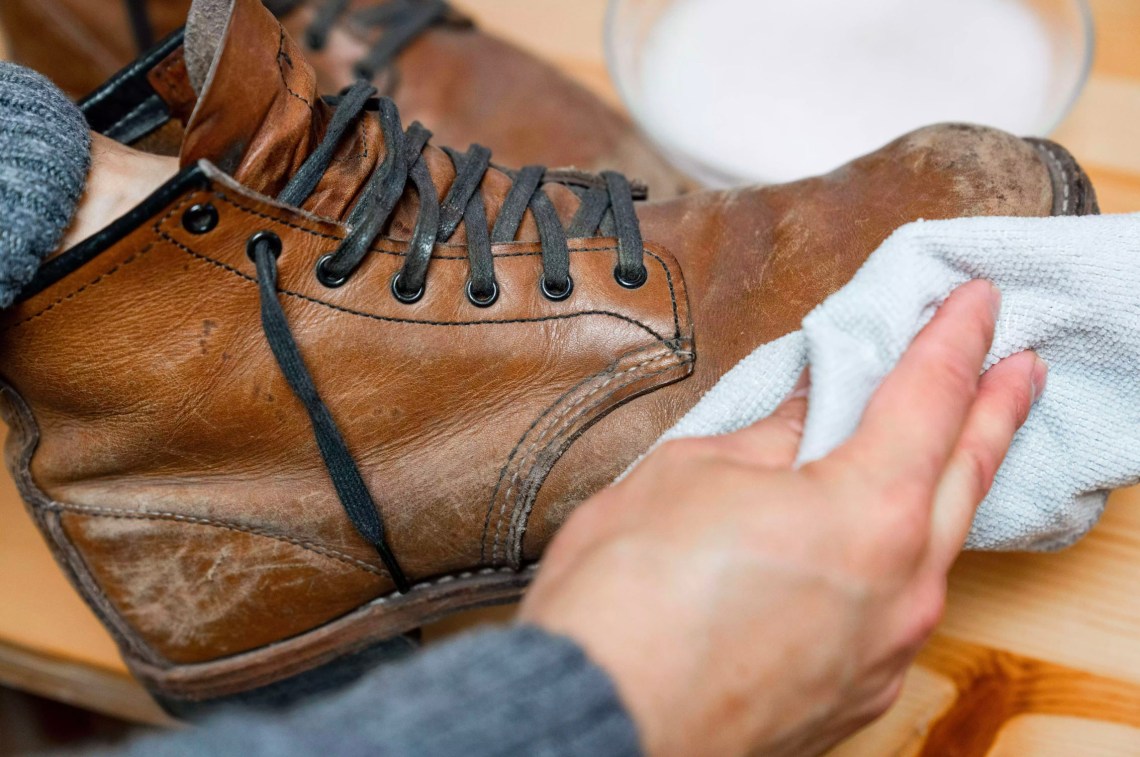 Start with wiping away surface mould. Picture: The Spruce

Now you need to get rid of the mould that is deeper into the material, and which has been formed in cavities like around lacing holes and in between leather pieces etc. If it’s just on the leather soles, it’s easier, but same process. For this you need to use a substance that kills the mould. There’s a few cleaners which do this available, but the cheapest and best is regular vinegar. This is strong on skin, use gloves to protect your hands. If you want to make the smell less harsh, you can mix the vinegar with lemon juice. The liquid should contain about 12% vinegar, so if it’s stronger mix it with water to achieve a similar concentration, to not be unnecessarily strong for the leather. Again, do this outside. Dampen a cloth or a sponge with vinegar and wipe thoroughly over the entire shoes. Don’t miss the inside if there’s any trace of mould there as well. It’s important that you wipe the whole shoes so it will all become damp, to avoid water marks when the shoes dry again. Let air dry. Check the shoes to make sure you got rid of all the mold, otherwise wipe this area again with vinegar, you can try to do it more carefully to not need to wipe and dampen the whole shoes again.

Once you’ve gotten rid of all mould and the shoes are completely dry, the leather is quite strained and dried out, and needs to be conditioned. First apply one or two layers of a good conditioner, preferably a leather lotion or similar, but also renovateur work. Then at least a couple of thin layers of a good shoe cream, and if you wish you can go on with wax etc to restore the shoes to their original state. If all this is done properly the shoes should be back in a good condition again. Should you not be able to solve it yourself, take the shoes to a good cobbler or leather restorer. 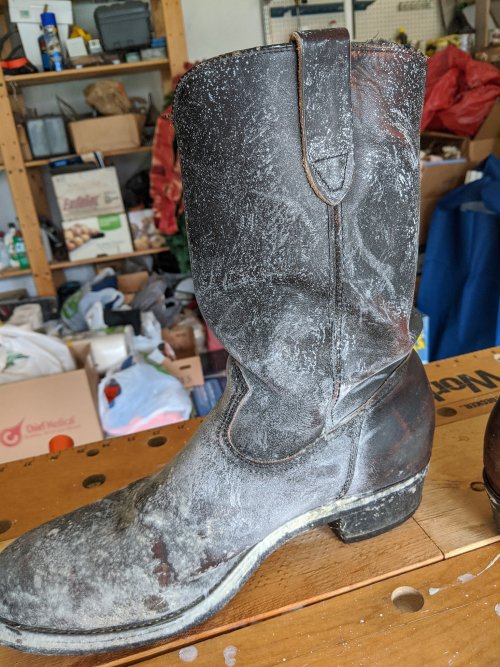 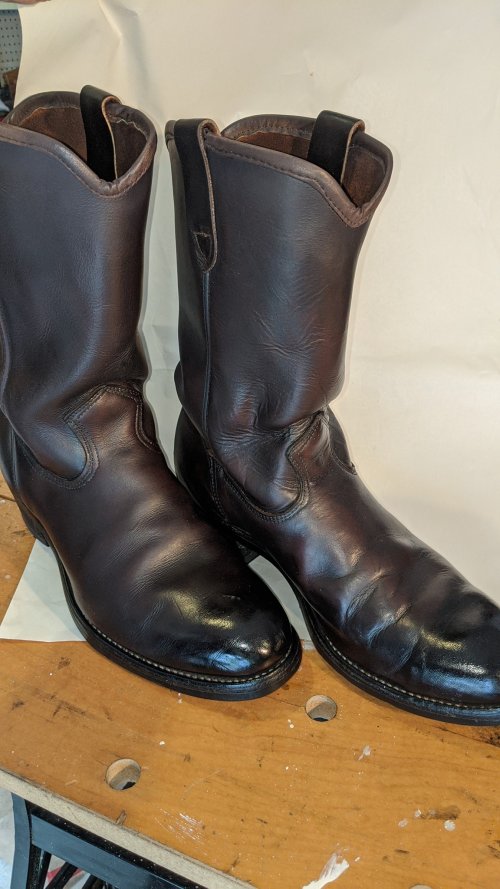 After a lot of vinegar, conditioner and cream they look a lot better. Pictures (also top image): Richard Satto / The Shoe Forum FB