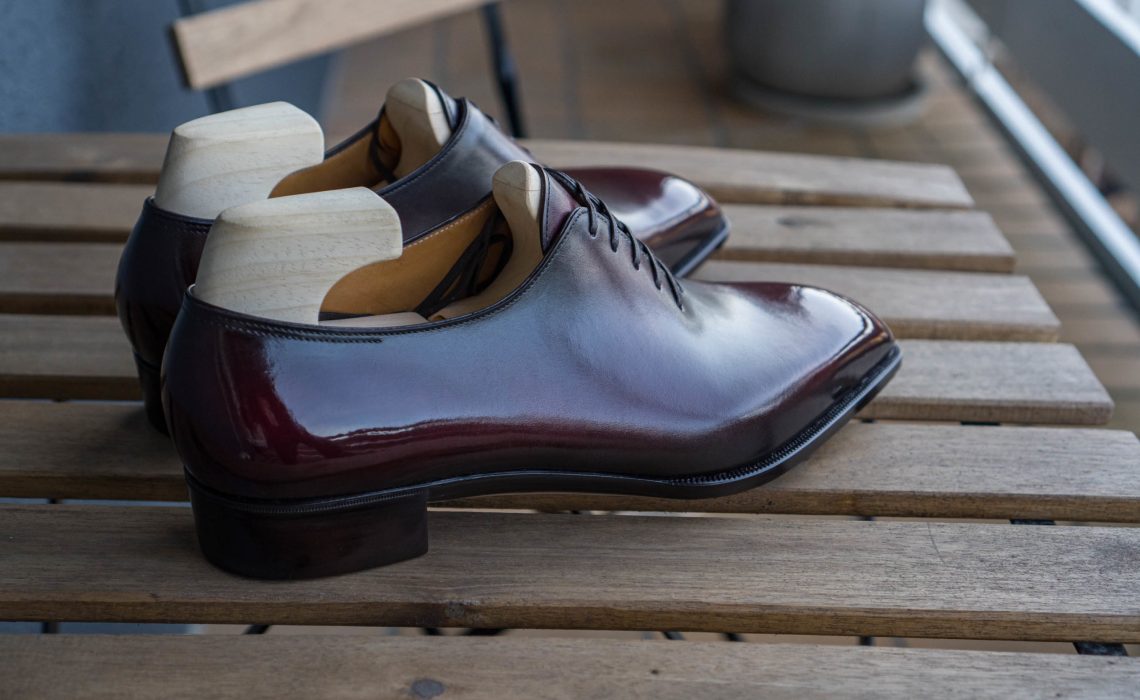 The seamless wholecut is a model that spent decades in oblivion before a rather unknown British freelance bespoke shoemaker revived the model a bit over a decade ago, causing a boom in manufacturers who set out to make the model. Shoegazing tells the story of one of the most difficult shoe models to make.

Given the latest article I posted, I thought this was a suitable follow up to that. A seamless wholecut is, just as it sounds, a shoe made from a piece of leather completely without seams. More information on how it’s actually done further down in the article. Who “invented” the model and was the first to make it is, as in many cases, a bit unclear, but it’s documented that it was done in the 19th century. Makers at this time pushed things on all regards possible, and in this environment it’s logic that a model like this appears. Among other things, there were some who made seamless boots that would be pulled onto the foot. In Northampton, UK, there was a man who worked in one of the area’s many shoe factories who, in his spare time, amused himself by making seamless wholecuts. He made a number of them before he passed away, and the Northampton Shoe Museum displays one of them, with several others in the museum’s collection. Many of them were probably entries in the many shoemaking competitions held in England, and many other places, at this time.
But in the first half of the 20th century, the model became rarer and rarer, largely because fewer and fewer shoes were being made on a small scale by bespoke shoemakers and others, instead large factories producing big quantities of shoes daily took over more and more. In these contexts, there was no time for excesses like seamless wholecuts.

A seamless wholecut from the 1910s, made by the shoe factory worker who made this type of shoe in his spare time. Image: Northampton Museum

So by the second half of the 20th century and the first part of the 21st century, the model had more or less completely fallen into oblivion, although it likely was made in the silence in some places. They didn’t appear more widely anywhere, and the knowledge of how to make them faded. So, now we’re in 2009, and a British freelance bespoke shoemaker working for several of the UK bespoke houses, is fascinated with the the model and starts to make seamless wholecuts again. One of the regulars on StyleForum, Rolf Holzapfel, is a customer and friend of the freelancer, and when he was there to visit, the freelancer brought out a shoe and said “do you see anything special?”. Upon inspection, Rolf realised it had no stitching, and immediately asked the shoemaker to make him a pair. He had also recently seen it done by French bespoke maker Dimitri Gomez. Rolf then posted a picture of his shoes with just the uppers over the last and a brief explanation of how it was done on StyleForum, and immediately when the bespokes makers D.W. Frommer and Marcell Mrsan saw this, they set out to test it. Marcell Mrsan, who has a popular blog about shoemaking, then posted pictures and info about his attempts there, and even more people caught on to the seamless wholecut.

This is of the shoe that the freelance bespoke maker in England made for the client who then showcased them on Styleforum, and set the ball rolling.

An image from Marcell Mrsan’s blog where he tried to make the model after seeing the post on Styleforum. Image: Shoes and Craft

In the same period, Gaziano & Girling had the freelancer make a pair for one of their clients. He was doing all the upper closings for G&G’s bespoke department at the time. Gaziano & Girling then went on to have him do seamless wholecuts for their bespoke clients, and became somewhat associated with the model. When the Swede Daniel Wegan joined G&G in 2010, he learned how to make the seamless shoes, and he was the one making them until he left to start Catella Shoemaker. Daniel ran on a trial and error approach when he started trying to make them. In the UK, only Daniel and this freelance bespoke shoemaker make them, but with the freelancer working for many different manufacturers, many of the other houses offer them, such as Foster & Son and John Lobb Ltd.

As mentioned, looking back the past decade a number of different manufacturers have started making this type of shoe, except for the one mentioned above. Some bespoke makers to be mentioned apart from the ones above are Yohei Fukuda, Roberto Ugolini, Clematis Ginza, Jan Kielman, Maftei, Antonio Meccariello, Il Quadrifoglio, Guild of Crafts, Dmitri Gomez and others. On the Ready to Wear side, the model is made by for example Saint Crispin’s, Enzo Bonafé, Acme and Oriental Shoes. Seamless boots have also started to appear, kind of the same thing where someone made it and then it spread quickly. For example, Bestetti and Meccariello have done it.

Here’s a picture from when Daniel Wegan made a pair of seamless wholecut loafers for Simon Crompton at Permanent Style/The Rake Online. So all this excess leather needs to be worked away so that it’s even and stretched the right way, and then the excess left underneath needs to be cut away

When you see these images, you understand why it’s a difficult shoe to make. Two latest images: The Rake Online

Making a seamless wholecut is difficult, as stated earlier. It puts enormous strain on the leather, and it takes time. And you don’t only need to get the leather stretched out ok over the last, it has to be even, it has to be done right, it has to hold up well. If you go through the process, it looks pretty much the same for everyone who does it, although there are certainly some variations. The leather used needs to be reasonably elastic and have high tensile strength. That’s why the model isn’t made in for example shell cordovan (several have tried and failed). So it’s suitable varieties of smooth or textured calfskin that are used in most cases. The upper leather is cut into an elliptical shape and then thoroughly soaked. Some soak the leather in almost boiling water to soften it, others leave it in water in a plastic bag overnight, some just spray it. Then it’s time for the most demanding part, when the leather is to be blocked.

Blocking is when the leather is shaped, so to speak, before it is cut. Pulling the leather around something is no big deal and quite easy to calculate how much it stretches and so on, but when the leather is going to be bent inwards so to speak over a larger area, it is in many cases an advantage to first block it to get the shape, and then cut it. The method is most often used for blocking vamps up over the instep of high boots or boots such as chelsea boots and jodphurs. But also then when it’s other demanding types of shoes. For a seamless wholecut, blocking is essential, as you have to shape the upper before you can pin it to the lining and then last it properly.

Here is the vamp of a higher boot blocked on a special blocking form, just for this purpose. Blocking can be done both on such or on the last to be used.

Here you can see a chelsea boot that is blocked, to facilitate and improve the final result. Two recent images:Bespoke Shoes Unlaced/D.W. Frommer

Here are a couple of seamless wholecuts that are blocked, one of which is taken out of the lasts. Then you can see how it holds its shape well afterwards. Image: The Rake Online

When blocking the upper leather on this model, you pull it over the leather alone, without lining or anything. This is done by slowly and methodically pulling the leather and having it spread evenly over and around the last. There will be a lot of excess material, especially around the arch, which is a challenge to deal with. Often the blocking is done in batches, so as not to stress the leather too much, and it stays on the last for a long time.
Once it has been blocked and rested on the leather for a while, the next difficult step is to cut the opening. Since the leather is stretched from the top of the lasts, so to speak, it will contract and drop downwards once that tension is released. So when cutting the opening you have to calculate the correct amount for this, and cut a centimetre or so above where you actually intend the top of the opening to be. After it’s cut, the top leather is allowed to sit on the leather for a while longer and you make sure it contracts and sinks properly, before it’s taken off and stitched together with the lining and tongue.

My pair of seamless wholecuts from Maftei, with only the upper leather to be used cut out.

Here they are blocked and the opening cut out

Closing finished and ready to be lasted. Image: Maftei

Next is the actual lasting, but by then the top layer is already formed and stretched correctly so this step is not as difficult as the blocking. All the excess leather has already been removed. Then, of course, it’s extra important to get it even and good across the last, given the special construction. From here on, the shoes are then made like any other.

A seamless wholecut is far from the most practical shoe you can make. The leather will be under extra stress, there’s no getting away from that, and more creases and small cracks will form than usual. These are probably not the shoes that will last the longest. Regardless, they are steadily growing in popularity. It’s a model that fascinates shoe enthusiasts, and will certainly continue to do so.

The back of a pair of RTW seamless from Saint Crispin’s. Image: Styleforum

My pair of seamless wholecuts from Maftei, with only the upper leather to be used cut out.

Here they are blocked and the opening cut out

Ready to go and ready to read. Image: Maftei

Next is the actual reading, but by then the top layer is already formatted and extracted correctly so this step is not as difficult as the blocking. All the excess leather has already been removed. Then, of course, it’s extra important to get it even and good across the reading, given the special construction. From here, the shoe is then made like any other shoe.

A seamless wholecut is far from the most practical shoe you can make. The leather will be under extra stress, there’s no getting away from that, and more creases and small cracks will form than usual. These are probably not the shoes that will last the longest. Regardless, they are steadily growing in popularity. It’s a model that fascinates shoe enthusiasts, and will certainly continue to do so.

The neck of a pair of RTW seamless from Saint Crispin’s. Image: Styleforum

Seamless wholecut boot, albeit a low one, by Antonio Meccariello, with brogue pattern. Image: Meccariello’s Tumblr 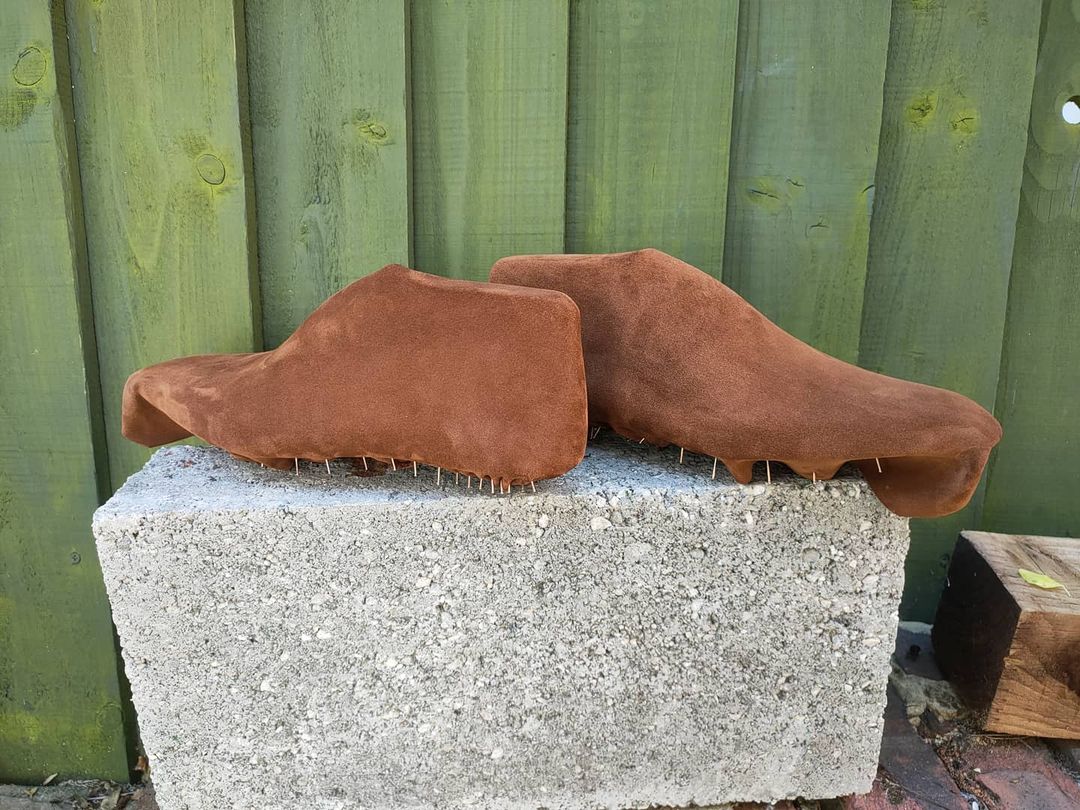 Suede seamless in the process, by Daniel Wegan of Catella. Picture: Catella Shoemaker

Very beautiful and relatively early variant from French Dmitri Gomez, who does bespoke under his own brand Dmitri Bottier and for Crockett & Jones. Was one of the inspirations when things kicked off wider.

The back of the above, looks like it has sunken a bit to much, due to what I mention above. Images: The Shoe Snob 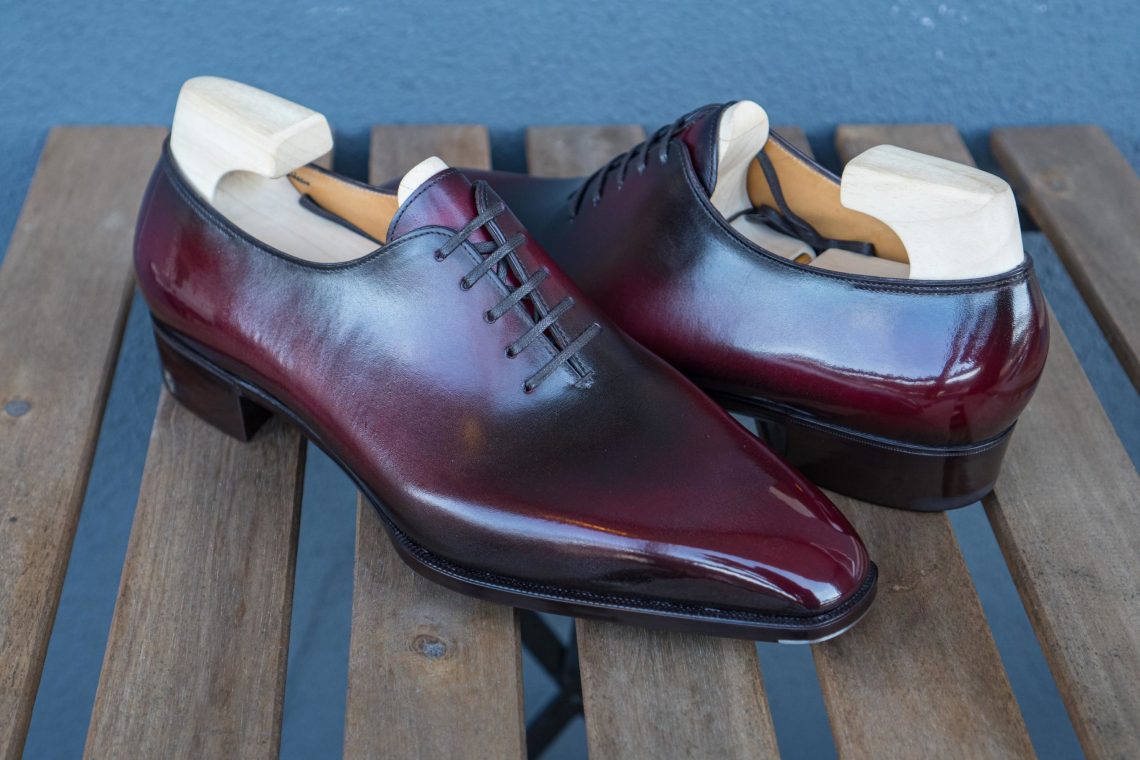 My latest bespoke pair from Yohei Fukuda, a seamless wholecut in burgundy patina.