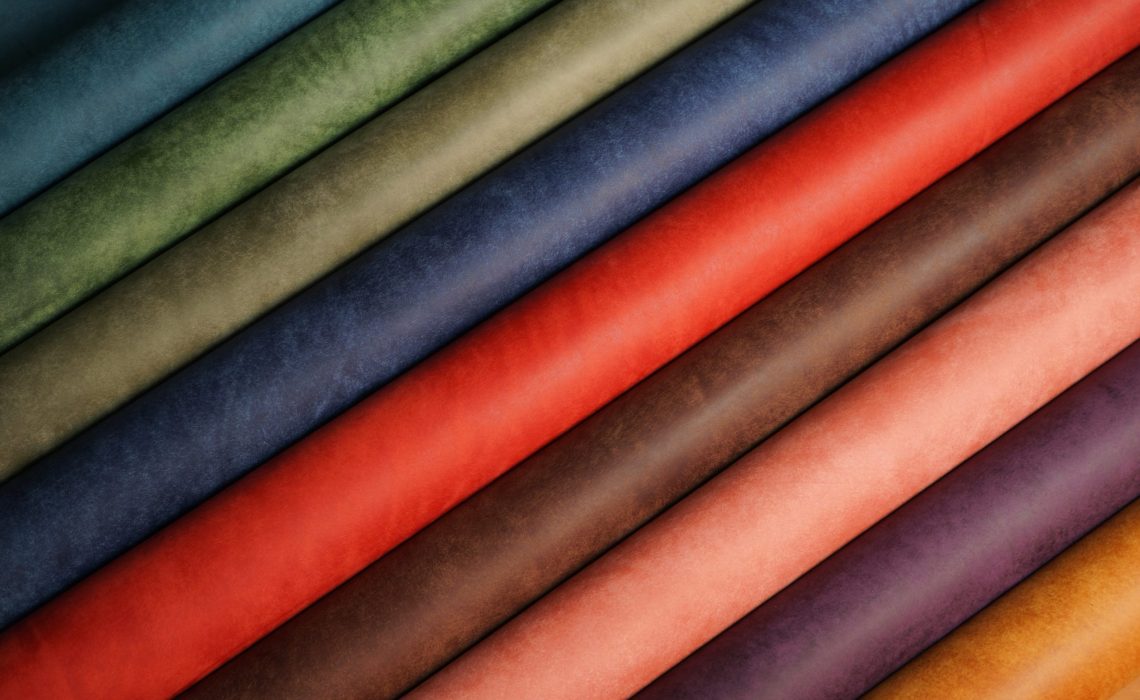 Anyone interested in footwear will have come across a number of different tannery names in the marketing of the shoe companies’ products. Shoegazing goes through many of the main suppliers of materials for quality shoes, to give you a good overview of what, where and how things are made. 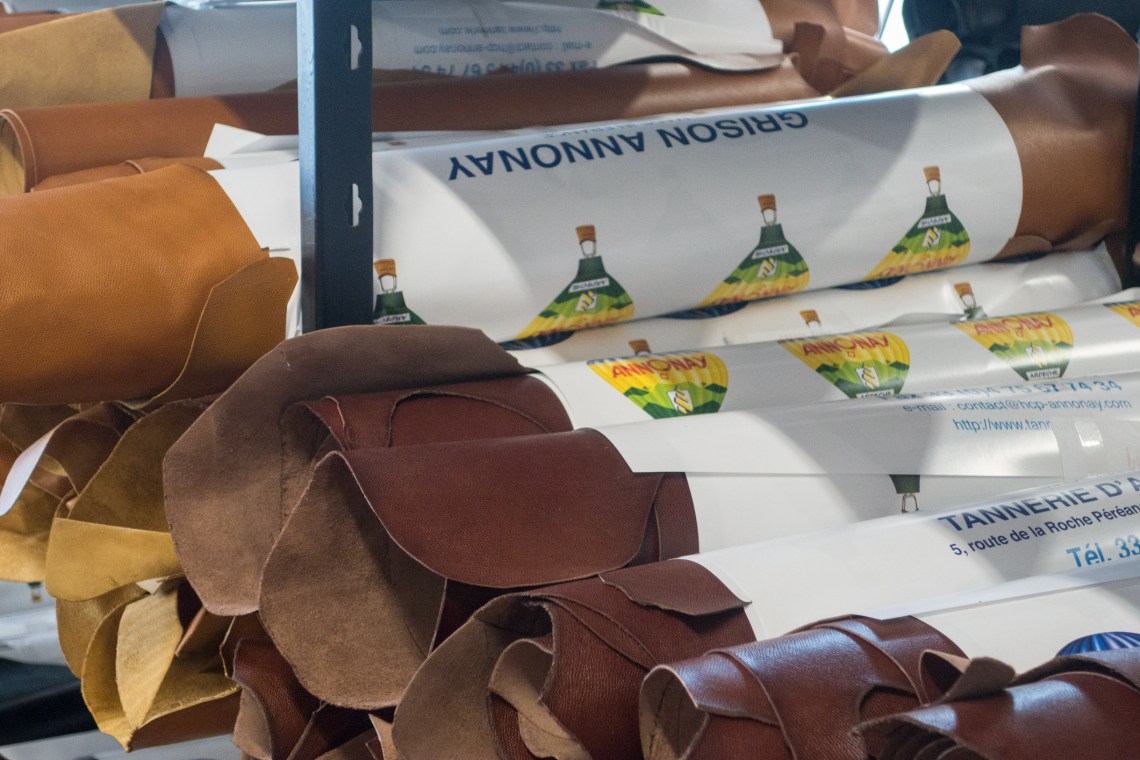 Rolls with hides from Annonay at a leather wholesaler in Italy.

Tannerie D’Annonay is one of the most well-known tanneries for high quality calf leather for shoes. Named after the French town in which it is located (the name translates roughly to Annonay’s tannery) where tanning has been practised since the 13th century. It’s a large tannery with a factory of around 8000 square meters and about 80 employees, producing about two million square feet of leather annually. The tannery has been owned for a number of years by Hermés, which is able to take many of the best hides for their own products, for example they own John Lobb Paris. Here mainly chrome tanning is done, they have several different varieties of so-called box calf (aniline dyed, when dyed in drums where the colour goes deeper into the hides, though it’s not actual aniline anymore just kept the name), they have a popular range of crust leathers (which is only dyed on the surface) and they have both smooth pressed leather and embossed grain leather. 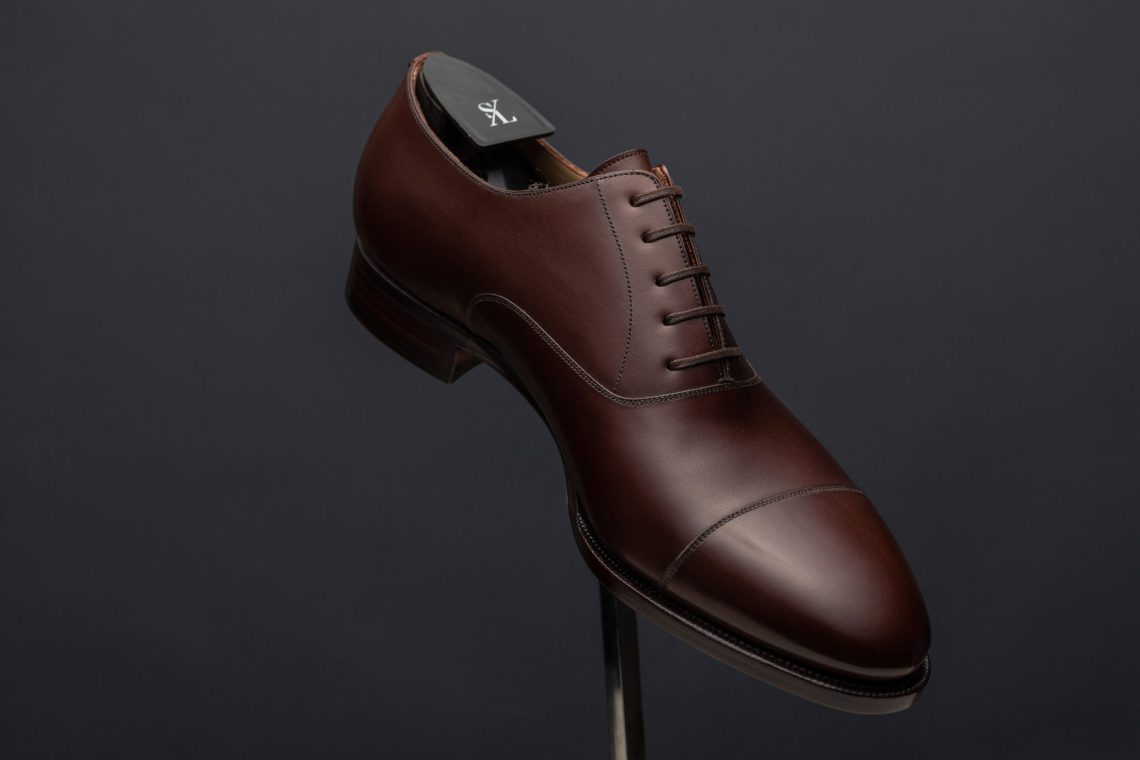 A shoe in Annonay’s crust leather called Vegano, which has a nice depth in the shade and quickly develops character. Bild: Skolyx 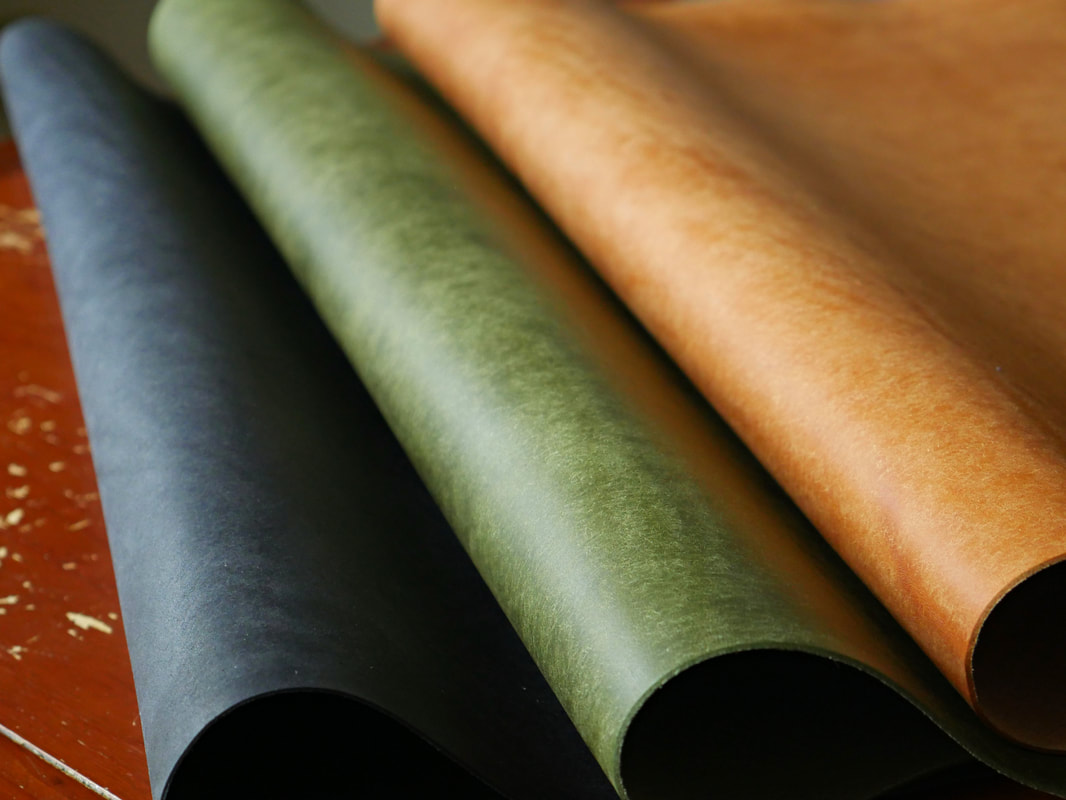 A brushed of shoulder leather. Picture: Monk Made Goods

Badalassi Carlo is A tannery that fully focus on vegetable tanned leathers, and their leathers are popular not least for makers of workwear boots. Based in Tuscany along the Arno river where most of Italys tanneries can be found, since a good supply of water is essential for tanneries in general, and tanneries doing veg tans in particular, and one have to remember that when many of these tanneries were set up all was veg tanned. Badalassi mainly offer solely shoulder leathers from cows, with for example Minerva Box that has a natural grain character and various types of pull-up leathers. 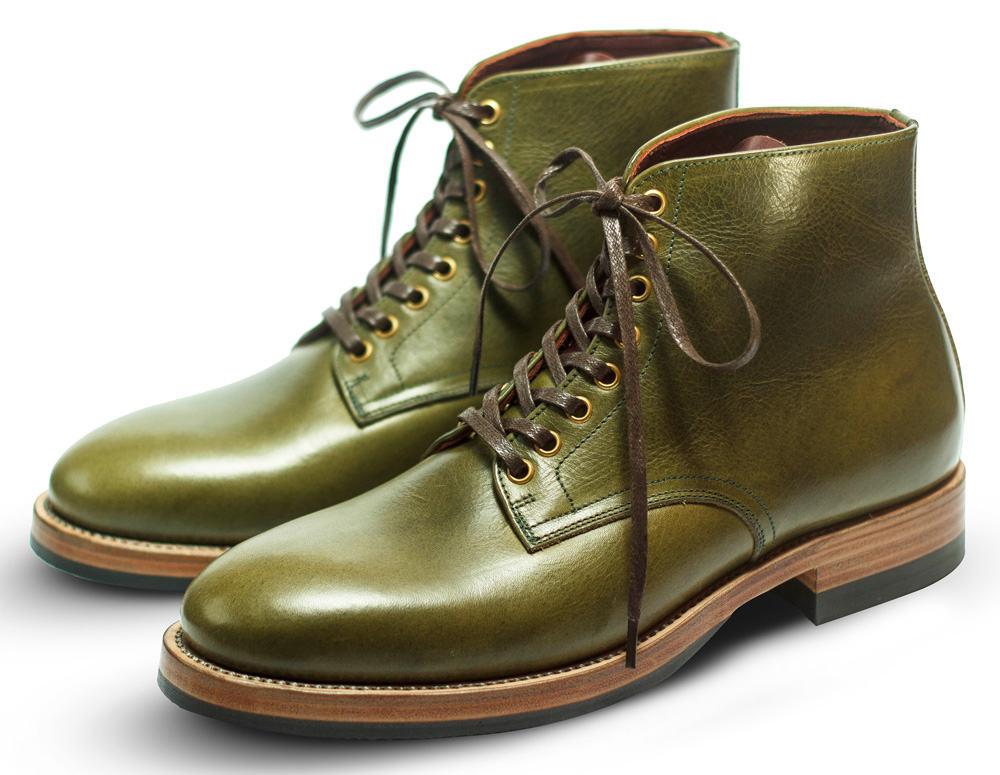 Boot in the leather Minerva Box which has a natural, subtle grain character. Picture: Sagara Bootmaker 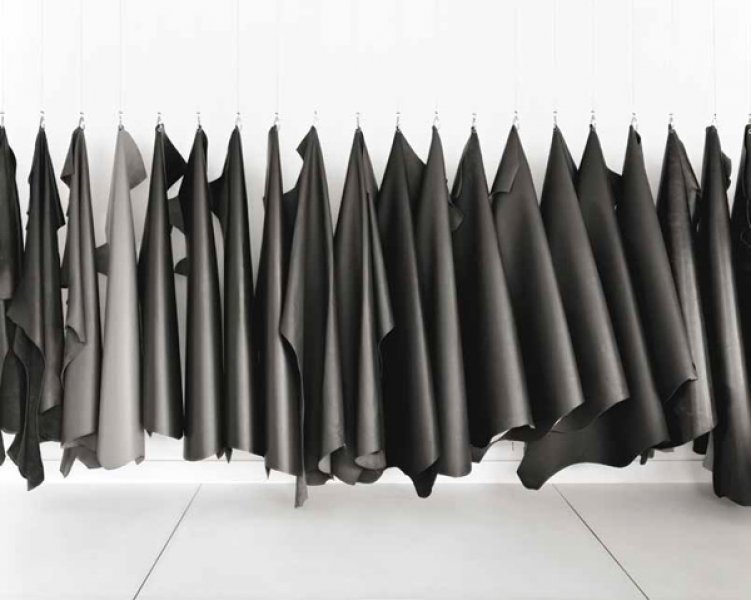 Hanging hides sure is a beautiful thing. Picture: Bonaudo 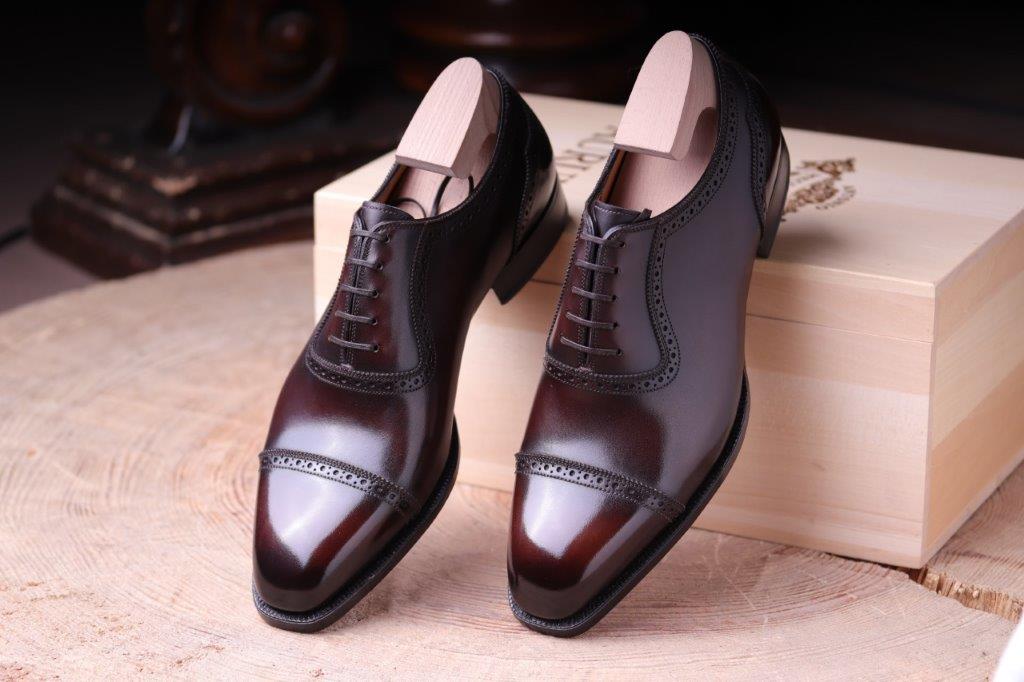 One of the giants when it comes to suede. Charles F. Stead is a British tannery located outside of Leeds. Their most famous product is called Repello suede and is a split suede with a nice nap. Of course, they also have what’s known as reversed calf, which is a more expensive and finer suede where the skin is not split into more parts, but it’s a whole calfskin with a sanded inside. It goes by the name Janus calf. Suede is also usually chrome-tanned before the actual sanding is carried out, after which it is usually tanned a second time. Apart from their suede F. Stead also has embossed grain leathers and leathers from kudu antelope, elk, deer and so on. 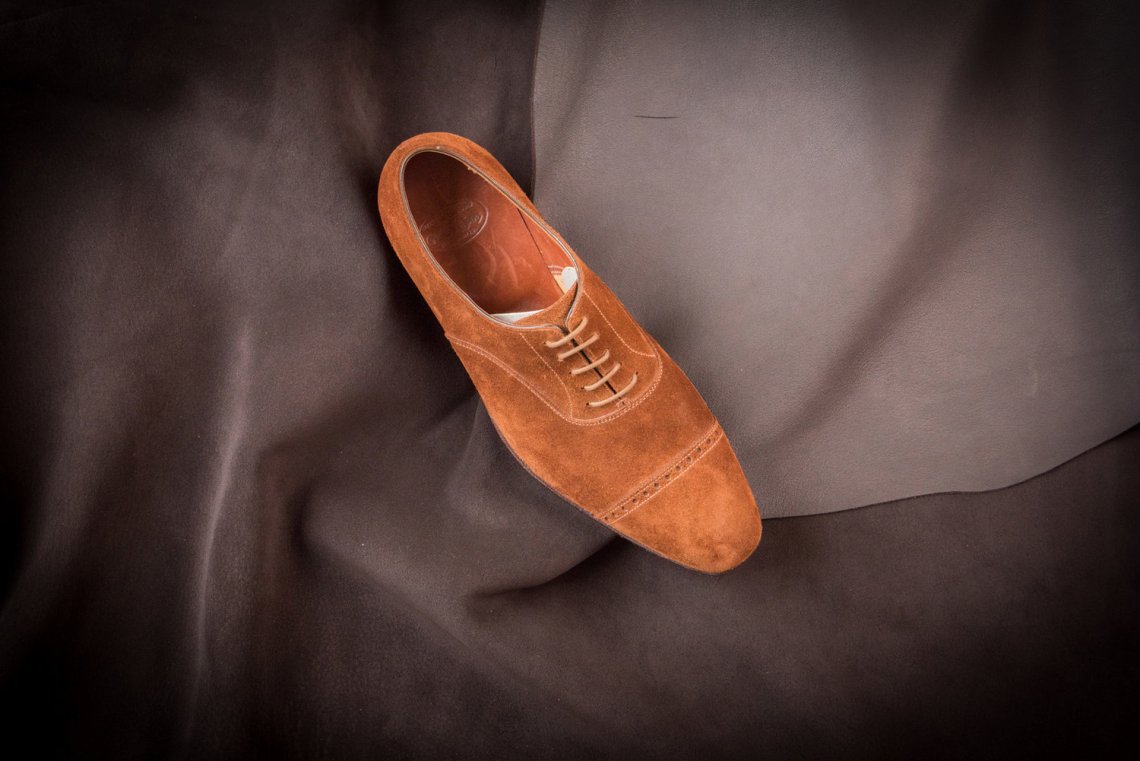 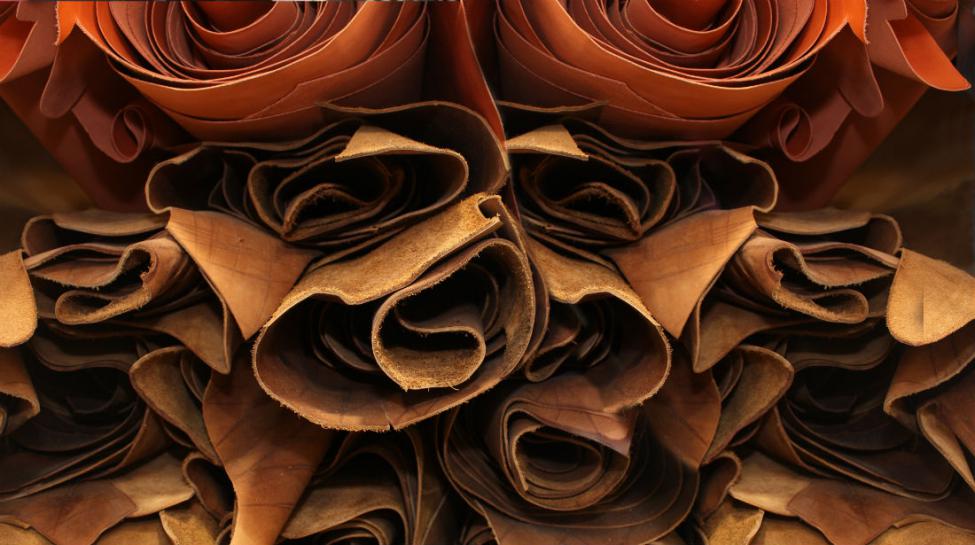 The other major French supplier of calf leather is Du Puy. Previously owned by French shoe manufacturer J.M. Weston, Hermés bought this tannery a few years ago as well, meaning that they now own both of the largest French suppliers of quality leather for shoes. Allegedly Weston made sure to get a deal so that they continue to have access to the best hides, so there they share with Hermés now. Also Du Puy is a chrome tannery that makes aniline dyed hides, and compared to its main competitor, Du Puy’s smooth leather skins are generally said to be a bit thinner and perhaps a bit more delicate than those from Annonay. 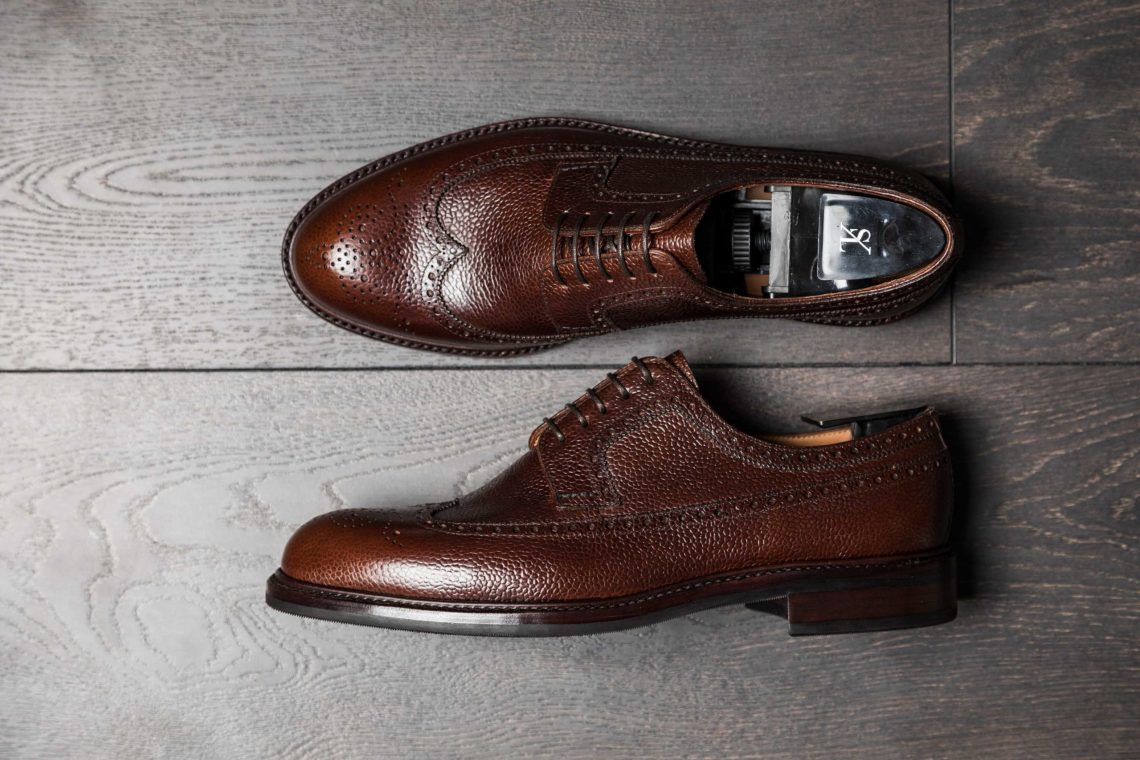 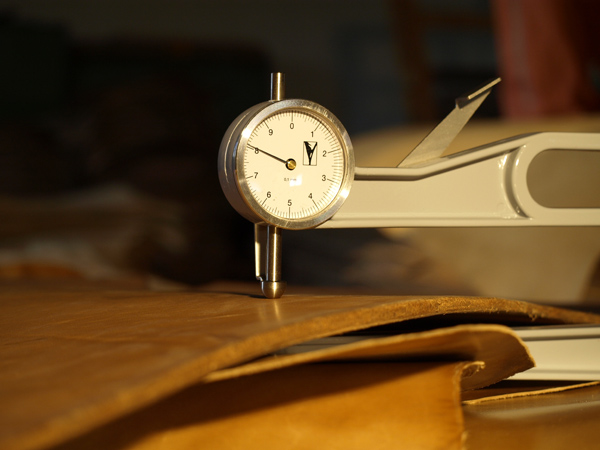 A tannery specialising in sole leather and material for building fully handmade shoes (insoles, stiffeners, heel lifts etc), which is a bit less well-known than Rendenbach and Baker, but also makes soles that are of a really high standard. Here, chestnut bark is the main ingredient in the vegetable tanning process, which is standard for tanneries in France and Italy, and it stays in the pits up to a year. What’s a bit special about Garat is that you can order their thick sole leather in a couple of different fat gradients, which many shoemakers appreciate as it can be better adapted to the type of shoes being made. 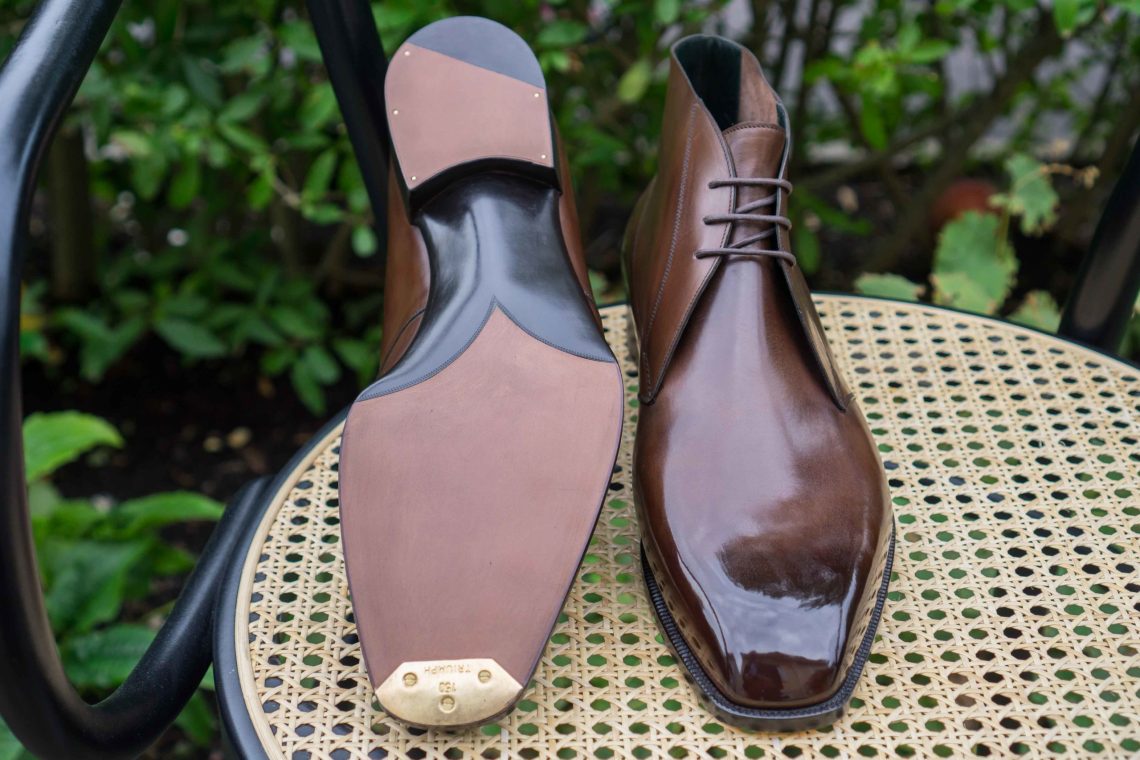 A pair of bespoke Gaziano & Girling chukkas of mine, where we did a funny experiment having one shoe made with an outsole from Garat, the other shoe made with an outsole from Baker. No better way to test durability than this. Time will tell who will be best, or if it’s a tie, now a couple of years in they both hold up very well with no big differences. 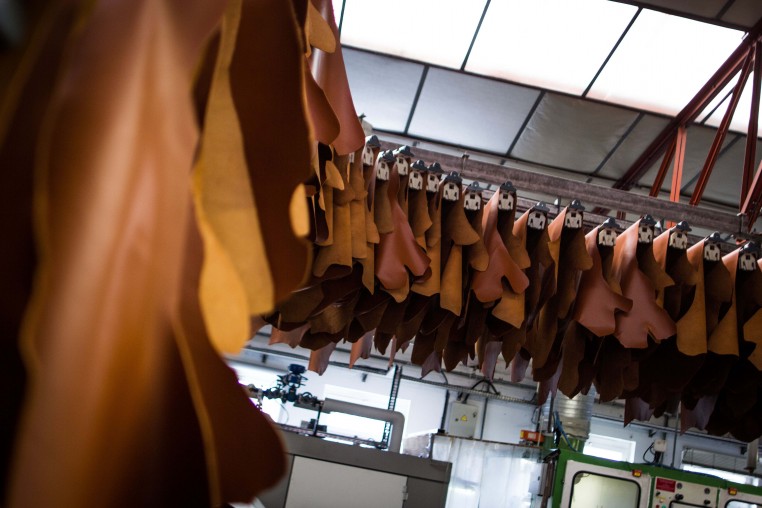 Haas is French tannery based right on the German border, which is still owned by its founding family, despite several lucrative offers from various luxury brands to buy them out (though Hermés is said to have some kind of influence and shareholding in the company nowadays). Hermés and John Lobb Paris use leather from the tannery a lot, not least after not having Ilcea as a supplier of their Museum calf. In addition, Haas also has several different varieties of smooth-pressed chrome-tanned leathers and some sought after embossed grain leathers, like their Utah grain. 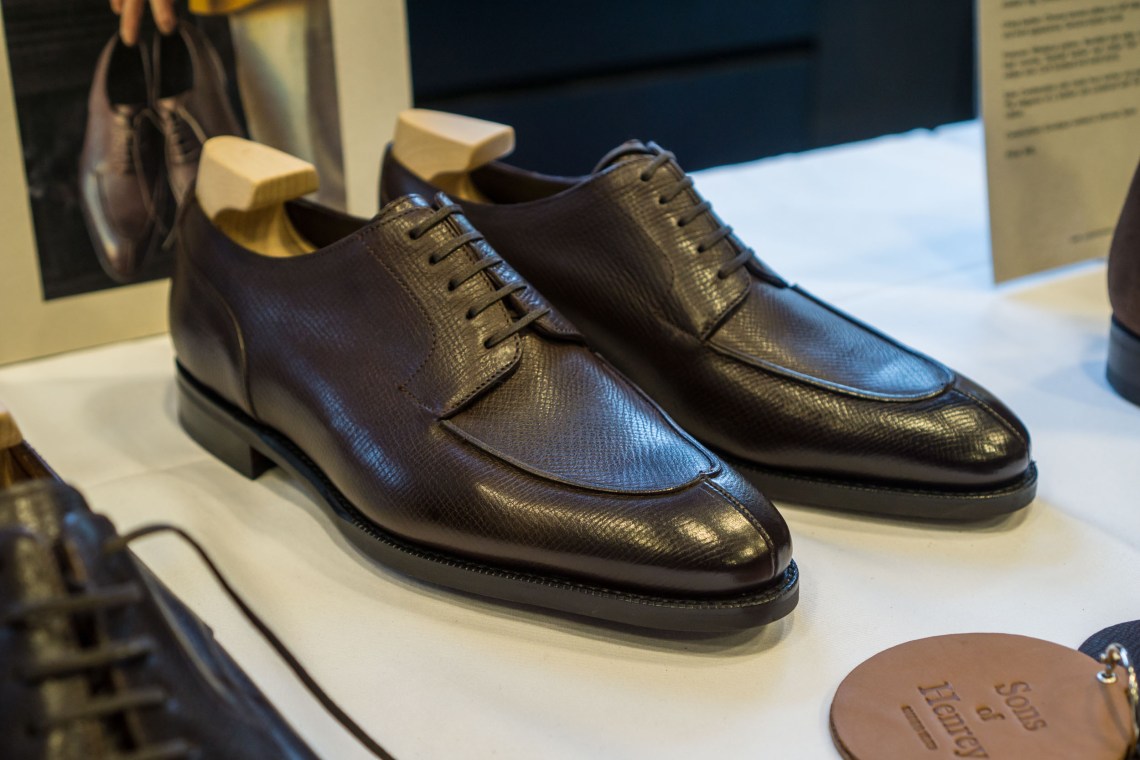 Shoes made of Utah grain. 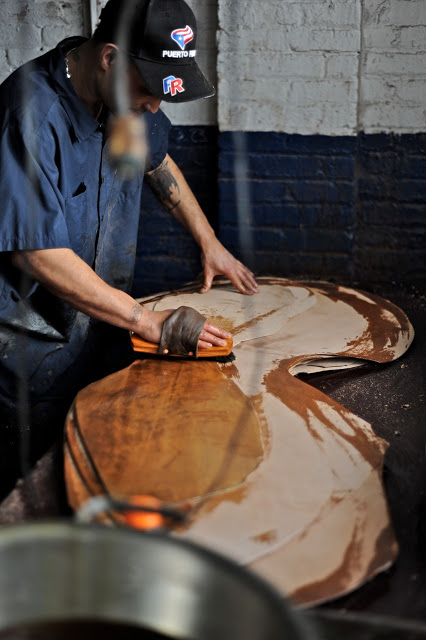 Along with Rendenbach, perhaps the strongest brand among all the tanneries in this guide. However, American Horween does not make sole leather, it’s of course their shell cordovan leather that has made them world famous. As most likely know, cordovan is made by a special tanning method of the leather from the horse’s rump, where a lot of fat is worked into the a muscle membrane call shell, giving it a very special slightly plastic character, and also forming wavy creases. Shell cordovan is sort of like a full reverse calf suede with the inside being turned outwards, but instead of buffing the corium here one use the muscle membrane and tan and treats this. Horween doesn’t just make cordovan though, Chromexcel is a hot stuffed (treated with waxes and oils) pull-up leather (referring to how it lightens slightly in colour in areas it is stretched) that has a sort of a slightly raw finish, and their hatch grain leather is the most popular version of printed grain made to resemble the mythical over 200 years old Russian reindeer leather found at the bottom of the sea of the Metta Catharina ship. 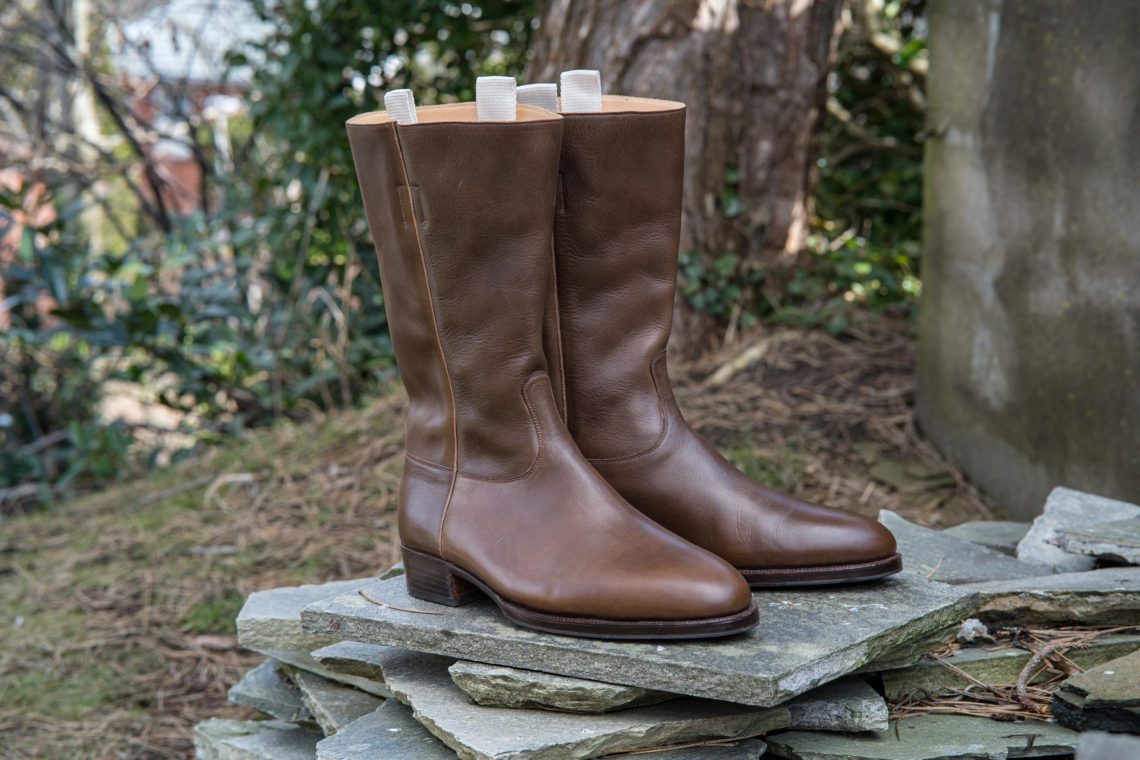 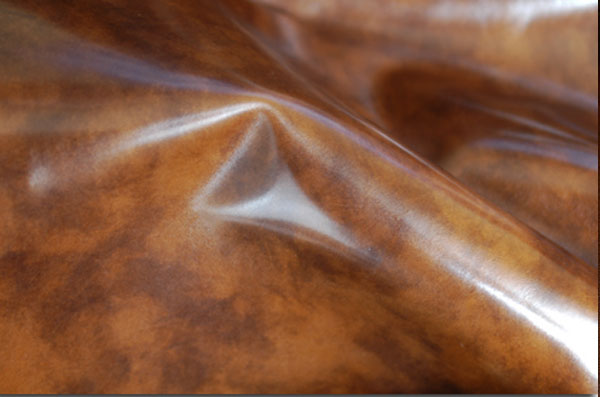 Was one of Italy’s largest tanneries. Went bankrupt a few years ago, causing minor panic for many shoe manufacturers, not least in Italy, which had Ilcea as its main leather supplier. After a few months, however, the bankruptcy estate was bought by the Vecchia Toscana tanning group, which now runs Ilcea, and is working to rebuild the good reputation it had before the tough years before the bankruptcy. Ilcea is best known for its Radica leather, which was established under the name Museum calf by John Lobb Paris (however, as mentioned above, Lobb no longer uses Ilcea for this leather, but Haas), a type of aniline-dyed leather that is taken out of the dye bath and bathed with damp sponges to get a characteristic mottled finish. Otherwise, Ilcea makes many different types of chrome-tanned leather, both aniline-dyed and crust leather, but also embossed grain leather and suede, among other things. 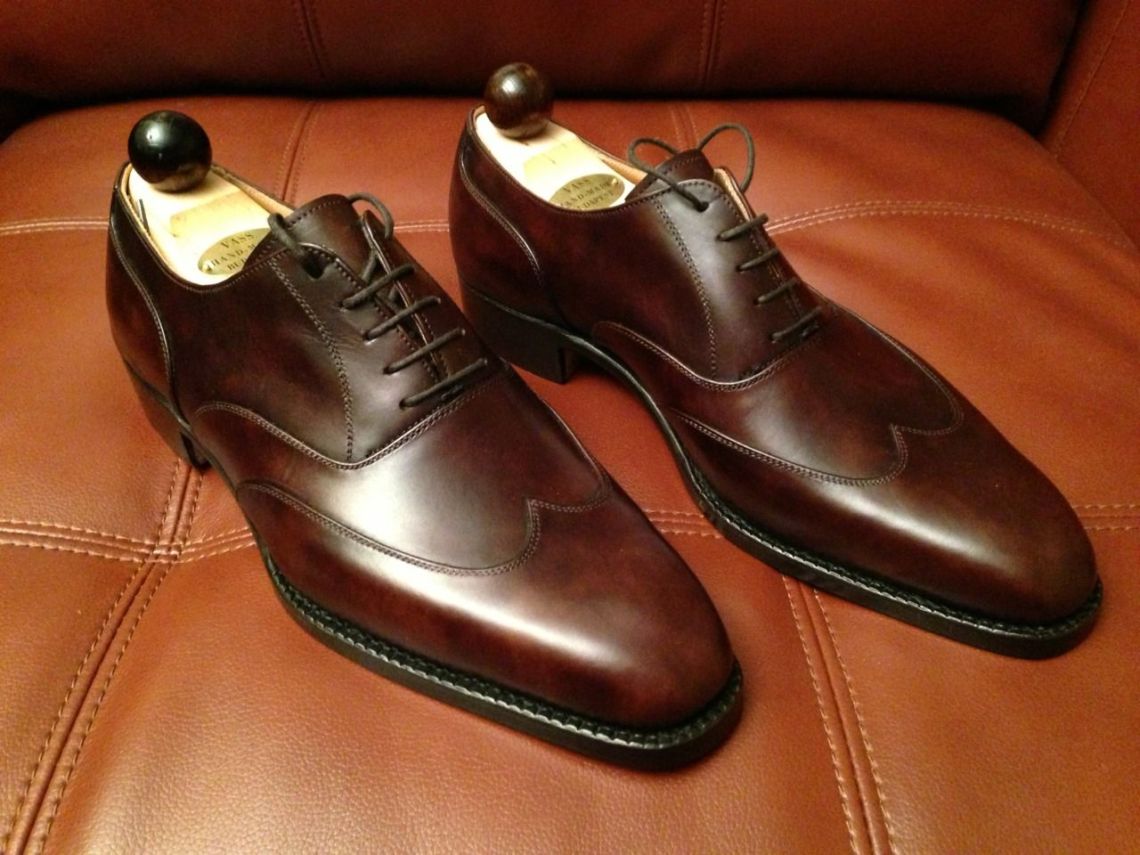 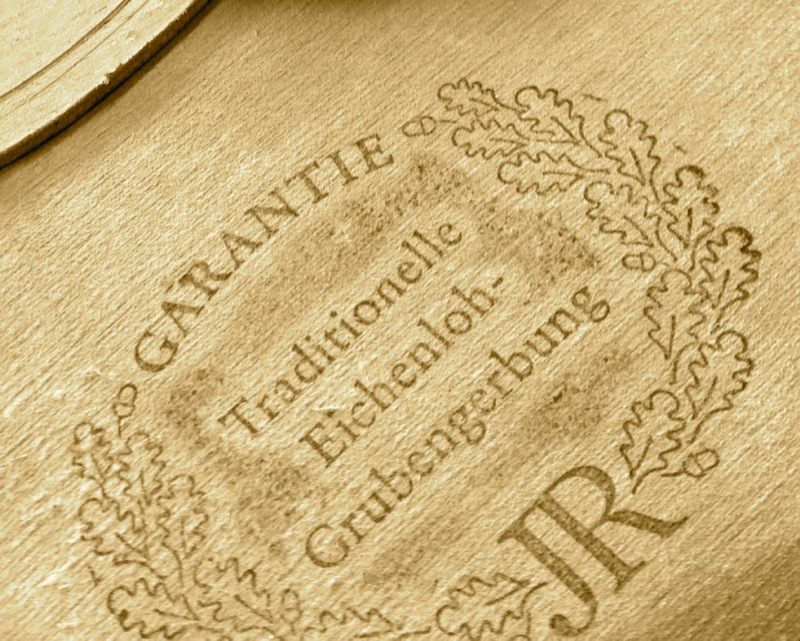 J. Rendenbach Probably the most famous manufacturer of sole leather, where in fact Lazslo Vass’s book Handmade Shoes for Men had a major impact on the brand. Through it, the two letters J.R. became synonymous with high quality soles, and they are probably really the only tannery where many shoe manufacturers choose to use their logo on the soles. J. Rendenbach’s sole leather is vegetable tanned with mainly oak bark, and for a very long time, around one year. It’s mainly the time that makes the durability so good, and also the price relatively high. Had some issues with their leather being too dry and hard to work with, but worked together with a group of shoemakers from around Europe to find their way back to a better feel of the leathers.

Shoe with the famous logo stamp on the bottom. Picture: Carmina 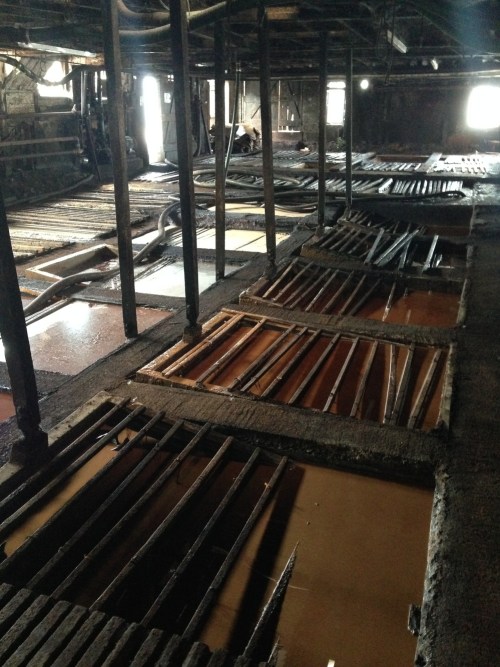 An over 150 years old tannery, which similar to Rendenbach makes oak tanned wool of very high quality. Baker is used by Gaziano & Girling, Alfred Sargent, Cheaney for their Imperial line and others. Many bespoke shoemakers prefer to work with Baker’s soles instead of Rendenbach as the British’s are softer and a bit greasier, making it easier to work with. Apart from sole leather and leather for building shoes, they offer upholstery leathers and a new type of hatch embossed veg tanned leather which closest of all available ones resembles the original, already mentioned, old Russian reindeer leather. 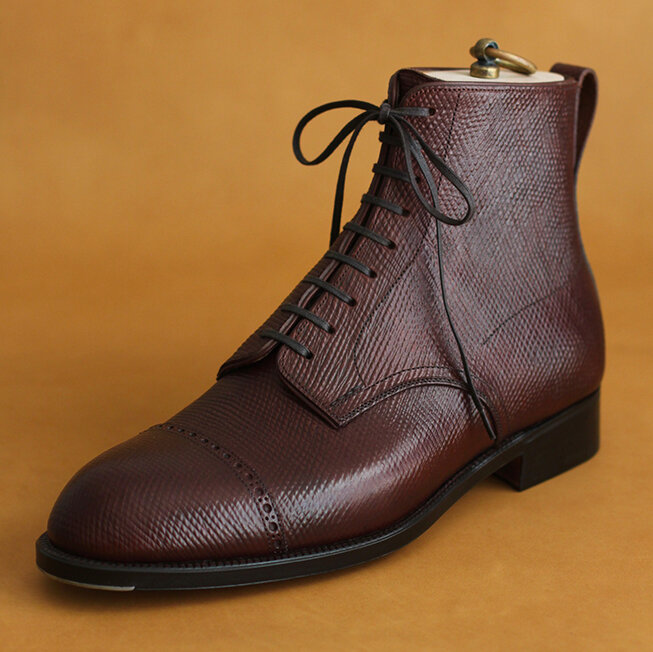 Boots by T. Shirakashi made in Baker’s Russian leather. 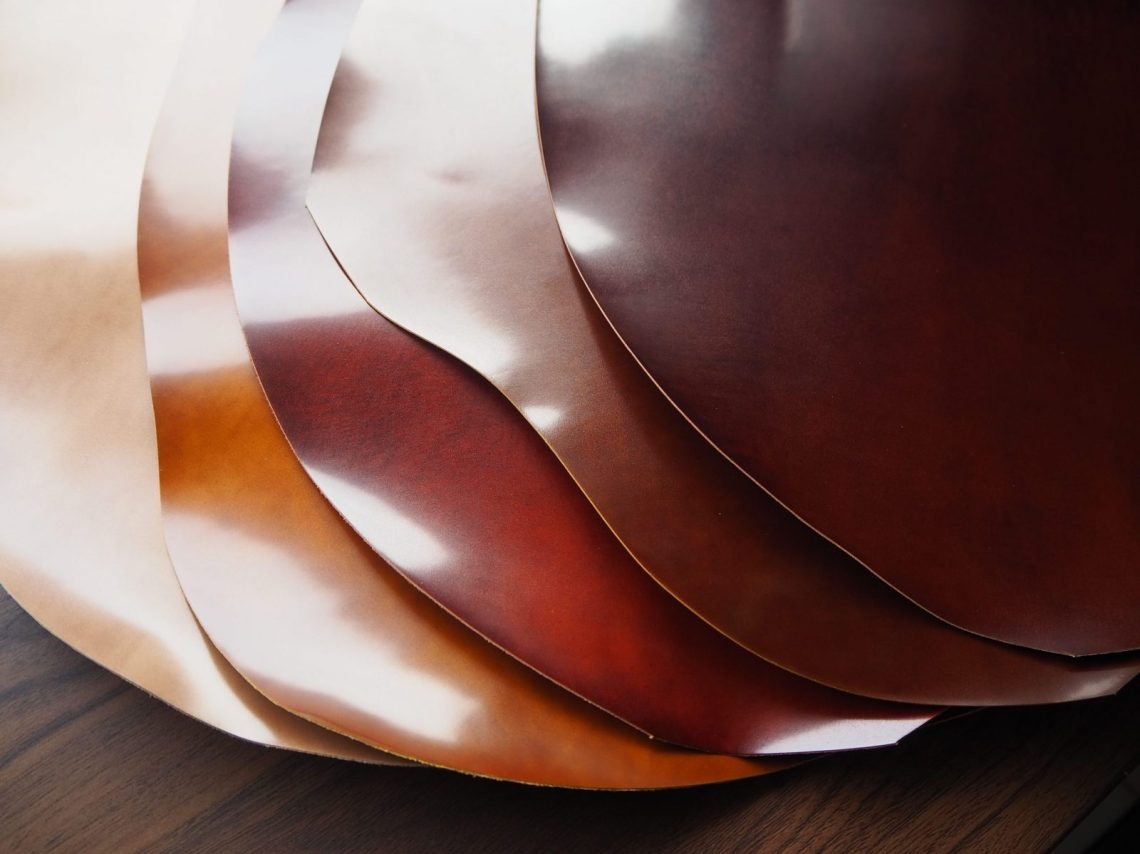 The most famous Japanese tannery is without a doubt Shinki Hikaku. Fully specialised in horse leathers, they are obviously most known for their shell cordovan, where they probably are second behind Horween in terms of fame. But they also have a lot of other really cool leathers from horse hides. Did see a boost of interest internationally after the EU / Japan free trade agreement in 2019 when European shoe companies could import Shinki without any customs or duties. 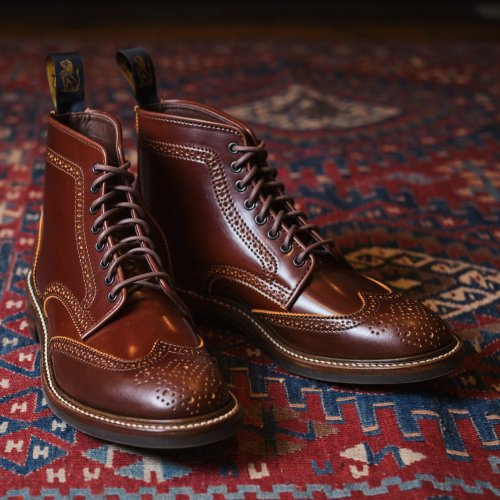 If you say Weinheimer, not many people nod in recognition, much more do so  if you say Freudenberg. Freudenberg was a legendary German tannery that mainly made fantastic black box calf, but also many other shades of aniline leathers. They went out of business in the early 2000s partly because of tougher German laws on the use of chrome. Freudenberg was replaced by Weinheimer, which took over all the recipes, and started up operations at a Polish tannery. They’re still huge on black hides and the rest that Freudenberg made, but general conclusion is that something was lost with the move to Poland and that the leather isn’t as great as the original was (although, should be said, the original Freudenberg hides towards the end of its existence also had changed quite a lot). 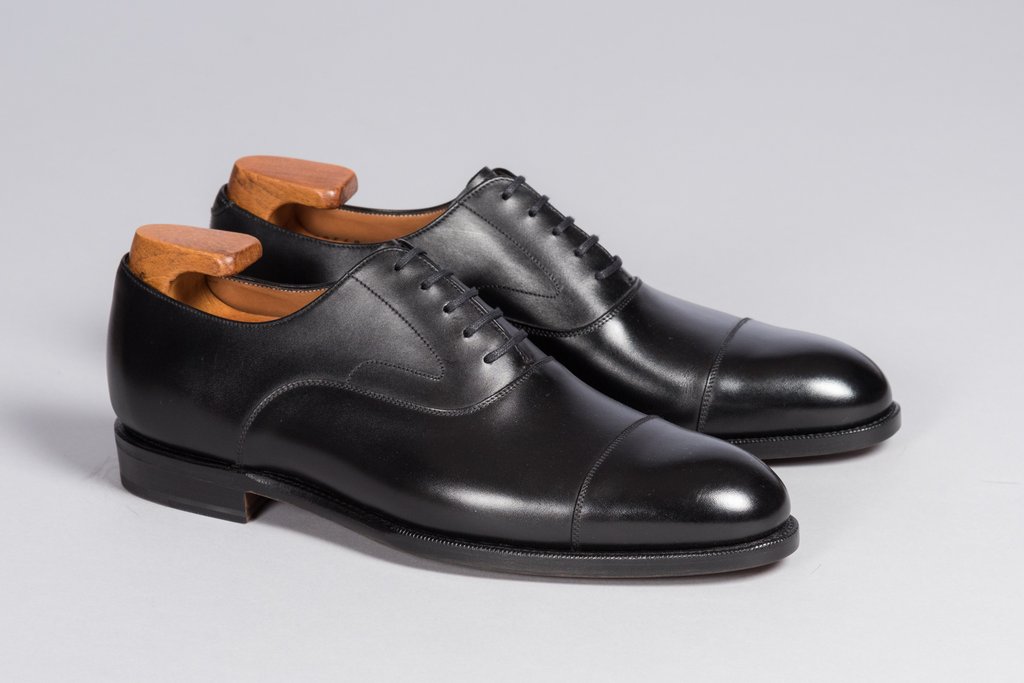 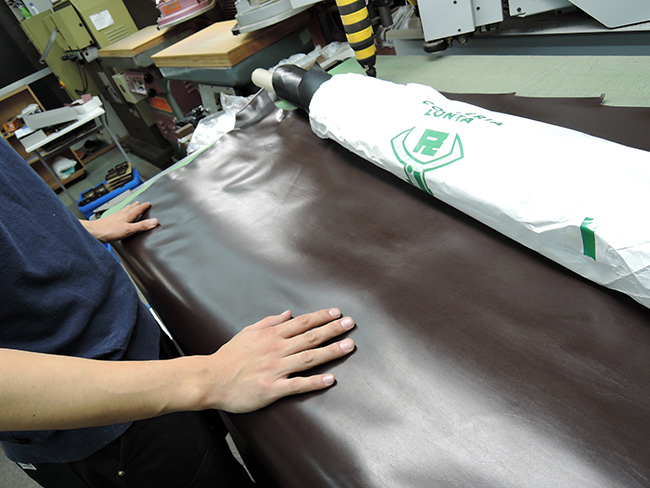 A hide fro Zonta being checked.

Another Italian tannery, which after Ilcea’s problems took over many of their former customers as their chrome tanned calfskins are relatively similar in character, quite thin but really soft and supple. The shoe industry has always been the main customer group for Zonta, although they supply some to furniture manufacturers, producers of leather goods and similar as well. Based in the town of Bassano del Grappa in the province of Vicenza. 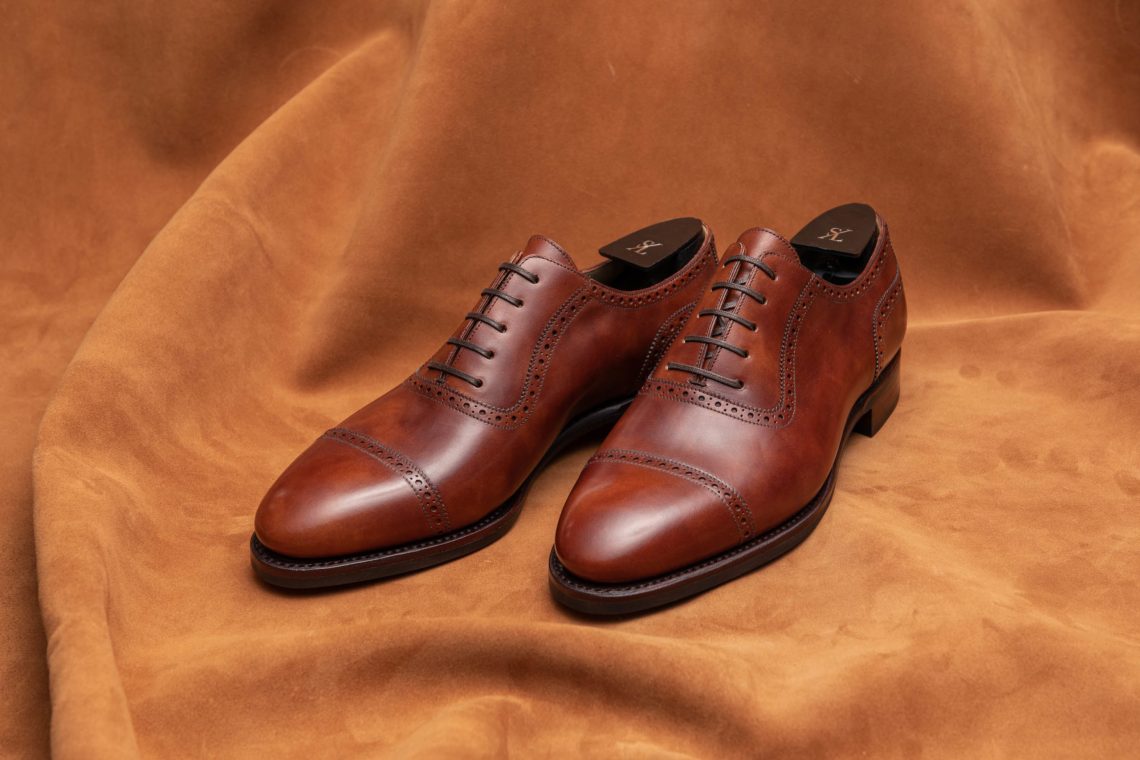 As always, this is just a selection of tanneries, of course there’s many, many more being used for quality shoes.