The Blake-stitched construction, or McKay as it’s also called, is the first construction method that seriously made it possible to industrialise shoe manufacturing. Here is the story of its emergence and development.

As mentioned in the history article on the Goodyear welted construction, where it’s not the inventor August Destroy whose name is associated with the machine, but the man who established it on the market, Charles Goodyear Jr., the opposite is true of the Blake construction. Here it is the inventor who is most associated with the method, while the man who established the machine has been overshadowed (although not as much as August Destroy, who is unknown to most people).

The declared genius Lyman Reed Blake grew up in Massachusetts, USA, and started making shoes at a very young age with his older brother, who ran a small independent workshop. When Blake was 16, he converted a pair of boots into roller skates and wowed people as he whizzed around the small town he lived in. As he grew older, he went to work for Isaac Singer and his company, the Singer Corporation, which successfully produced efficient sewing machines. Blake became a partner at Singer in 1856, working on developing and inventing new solutions for sewing machines. On July 6, 1858, Lyman R. Blake, then only 23 years old, was granted a patent for a machine that could sew together the insole, uppers and outsoles of shoes. He sold the patent to Gordon McKay the following year for $8,000 in cash and another $62,000 for future profits. Blake then worked for McKay until he retired, further developing the machine with McKay, who also had good ideas for making the sewing machine simpler and more efficient. Lynon Reed Blake on the left, Gordon McKay on the right. Pictures: Wicked Local and Salt of America 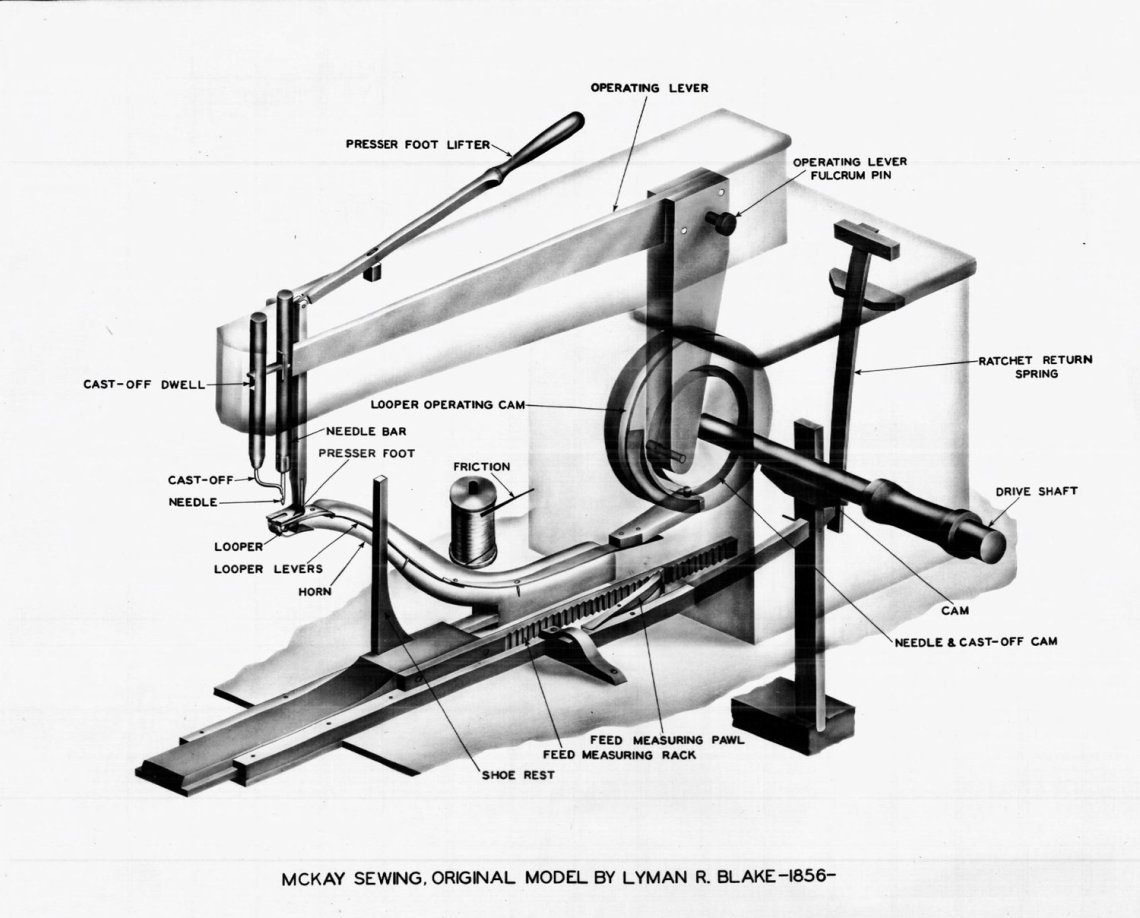 The Blake sewing machine (it’s often called McKay machine, or Blake-McKay stitching machine, especially within the industry, but for simplicity’s sake we’ll go with Blake machine in this article) allowed shoes to be made much faster than hand-stitching, which was the only thing done in the 1850s. When McKay tried to get his machine to the manufacturers, they just laughed at the invention of making shoes by machine. McKay was about to give up, no one was interested in the machine, and he barely had any money left. But when the American Civil War broke out in 1861, many shoemaker employees had to join army forces, while the need for shoes for the armies increased dramatically. Making shoes quickly became important, and now McKay came up with the solution of not selling the machines to the shoe manufacturers, but putting them in their hands and getting paid for each shoe made instead. In this way, the shoemakers did not have to invest heavily in machinery. Now McKay was on a roll, and Blake sewing machines became more common. With the establishment now in the first half of the 1860s, they were 10-15 years ahead of the Goodyear machine.
As McKay only made money when the machines were running, he set up teams to service and maintain the machines. McKay and Blake not only revolutionised shoemaking with this new type of machine, but also played a major role in industrialisation. The shoe industry was the first with this type of solution where machines were leased out and royalties were taken on the number of goods produced, and where service etc. was included. The system has since spread to other industries. 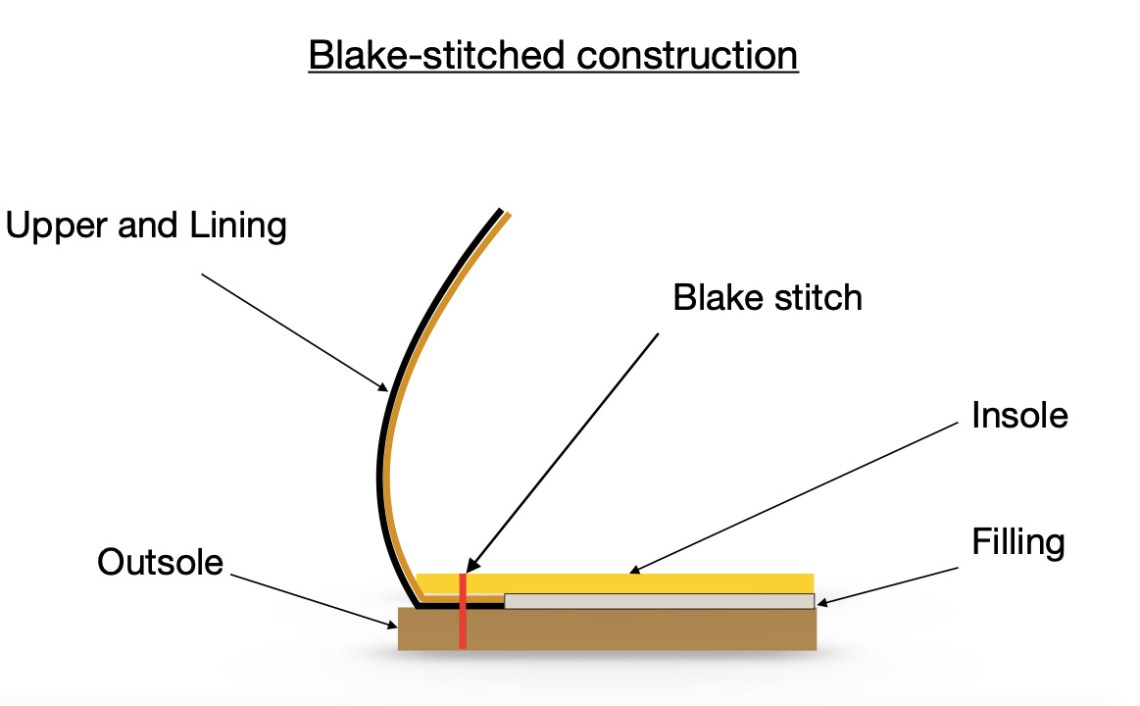 A Blake sewing machine’s main feature is a long, angled arm that sticks up from below towards the needle part. It is the design of the arm that allows access to sew easily inside the shoe at the front of the toe. A Blake machine sews a chain stitch with single thread. It can be made up to the heel, called a 270 degree seam, or in a 360 degree seam all the way around the inside of the shoe. The first Blake machines were hand-cranked, but later steam-powered and eventually electric machines were developed, making the construction method very efficient.

Since a Blake stitched shoe requires only an insole, an outsole sole plus heel (and maybe some filling but not necessary), it’s a simple and inexpensive construction method, and is still by far the most common method for shoes with a sewn construction. Blake shoes can be made very flexible and as there is no sole stitch running around the outside of the shoe, the sole can be cut close to the shoe for a neat appearance. The disadvantages of the construction method are mainly that it’s not that waterproof since the stitching goes straight into the shoe, and that a Blake machine is required to resole the shoe (which not all cobblers has access to), plus it cannot be done too many times as new holes are made in the upper leather which eventually becomes too weak and does not hold. The stitching that occurs inside the shoe can also be a bit uncomfortable for some people with very sensitive feet.
In terms of quality footwear, the Blake construction is most common in the southern latitudes, the Italians make a lot of Blake stitched shoes and French love them, there it’s suitable them well with neat, lightweight shoes in their mostly relatively warm and dry climate.

This is how neat shoes can be made with Blake construction. This pair is from the Italian brand Santoni. Picture: Vousten Shoes

Already in the first years after the Blake machine established itself on the market, further development of the construction method that today goes by the name Blake/Rapid began. It’s a construction that is a cross between a Blake stitched and a welted shoe, but which is comparable to a Goodyear welted shoe in terms of its properties, with the same resoleability and just as good water resistance. However, it tends to be lumped together with ordinary Blake stitched shoes, mostly due to lack of knowledge. With Blake/Rapid, a midsole is sewn to the shoe with Blake stitching, and then an outsole sole is put on top of it and a sole stitch is made. In the early days, it was common for the Blake seam to be machine sewn, but the sole stitch was done by hand. Then the sole stitching machine was developed as part of the machinery for Goodyear welted shoes, and that machine started to be used also for the sole stitching of Blake/Rapid stitched shoes. Rapid is one of the best known manufacturers of sole stitching machines, hence the construction method has come to be known as Blake/Rapid, simply shoes sewn with the Blake machine and the Rapid machine.

A Blake/Rapid shoe is re-soled in exactly the same way as a welted shoe, by removing the sole stitch and attaching a new outsole which is then sewn in place with the same machine as for welted shoes. They can be either half or full resoled. Just like a welted shoe, the structure of the shoe is kept intact, the Blake seam is not touched. If the midsole needs to be replaced, this is also possible, as the midsole is resoled in the same way as a Blake-stitched shoe. The seam inside a Blake/Rapid-stitched shoe is usually not felt as much as on a regular Blake-stitched shoe, since on a regular Blake the seam is made after the last has been taken out, whereas on a Blake/Rapid the last is put back into the shoe for the further production phase with the sole stitch and so on, and then the seam is pressed into the insole and wearer barely experience it at all. 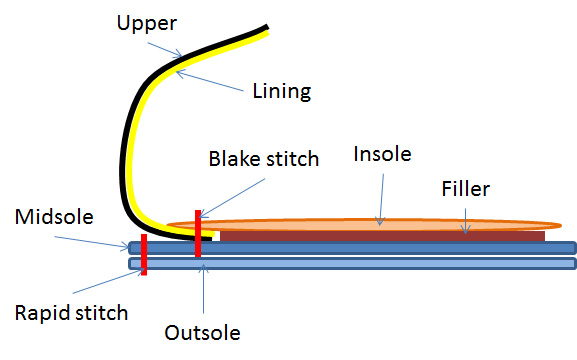 Here is a drawing of the Blake/Rapid construction. Picture: Weltedshoes

A Blake/Rapid-stitched shoe sawn apart so you can see it in cross-section. As you can see, the compact design means that you don’t need a thick layer of cork on a Blake/Rapid shoe, so either you leave as is, or add  a thin layer of cork or felt. A bit more like a hand welted shoe in that aspect than Goodyear-welted  ones that have large voids. Picture: StyleForum/Ron Rider From the outside, you can’t tell the difference between a Blake/Rapid-stitched shoe and a Goodyear welted shoe, since the midsole is indistinguishable from a welt. But if you look inside, you can see the Blake stitching.

The standard Blake construction is usually cited as a clear product of industrialisation, a method that can only be done by machine. This is because it is not possible to reach the inside of the shoe to sew by hand. However, there is actually a method that allows shoes with the same type of construction as a Blake-stitched shoe to be sewn by hand. This is done by pulling the thread inside the shoe by threading the needle straight through it before inserting the needle into the shoe from below. I’ve seen a video of this being done, but unfortunately can’t find it now. It’s not exactly an efficient method, but quite interesting.