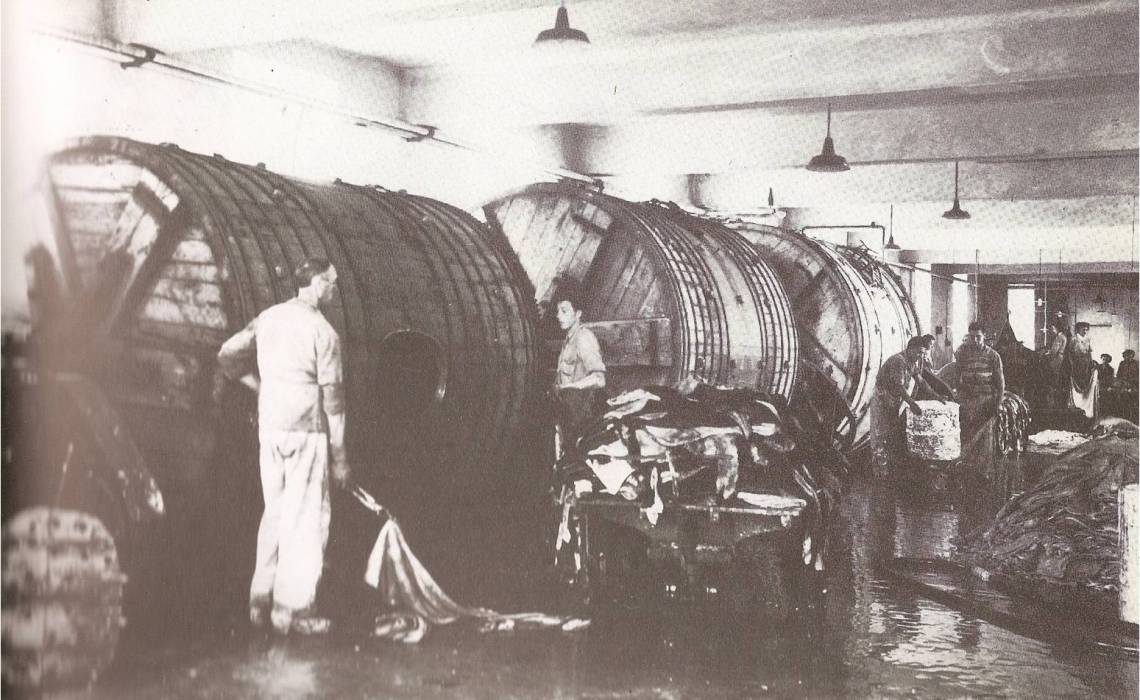 The upper leathers available in the first half of the 1900’s was in many ways far superior to what was around before that, and to what we have today, in terms of quality. Learn the complex reasons for this, in an odyssey through the history of leather tanning, with the main focus on the golden age.

Leather has been tanned for about 8,000 years. First one tanned leather with substances from brains (!) or oil, or tanned hides with smoke, but then about 5,000 years ago one started to use vegetable tannin agents from bark etc, and for several thousand years various types of vegetable tanning was the standard for how one created leather. By 1840, the medical community had adopted sutures made of tendons from cattle that were stabilised by soaking in a chromium (trivalent chrome, not the much more harmful hexavalent chromium) solution. A bit later it was discovered that soaking these chrome tanned sutures in glycerol made them softer and more pliable. These two advances in medical technology were soon adapted by tanners and became chrome tanning and fatliquoring. The world here went from the industrial era into the technological era, and things went extremely quick. Soon, chrome tanned hides reached extremely high levels of quality, and it’s said to have peaked somewhere in the first half of the 20th century. 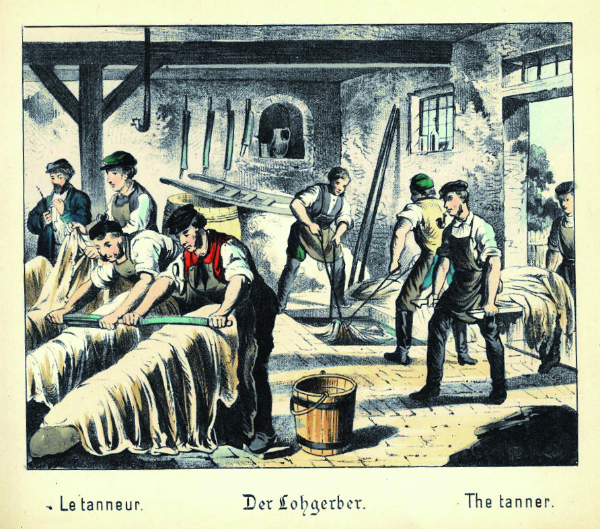 One of the reasons that leather quality was extremely good in the first half of the 1900’s, is that it was at this time that most research was done, and large steps in leather tanning theory took place. In the 1800’s RDI (research, development and innovation) was mainly done by the industry itself, but during the first decades of the 20th century the leather industry had become so big and important that a lot was now done at universities and by professional scientists and researchers. The British professor Henry Richardson (H R) Procter pioneered the field with the book The Principles of Leather Manufacturing in 1903 and later the publication of The Making of Leather in 1914, books that detailed the then “state of the art” for leather technology and science and formed the base for future research. These books are still sold today, in fact The Principles of Leather Manufacturing’s was published in a new edition as recent as 2015. Procter was followed by names like J A Wilson, USA, who merged the practice of tanning with the academic science of collagen (skin consists of collagen fibres), and served as an interpreter of basic science to the industrial leather chemists and technologists. Also the Swedish leather chemist K H Gustavsson, who researched the reactions of chromium salts, polyphenols and aldehydes with collagen as a start to the molecular understanding of tanning, played a vital role. 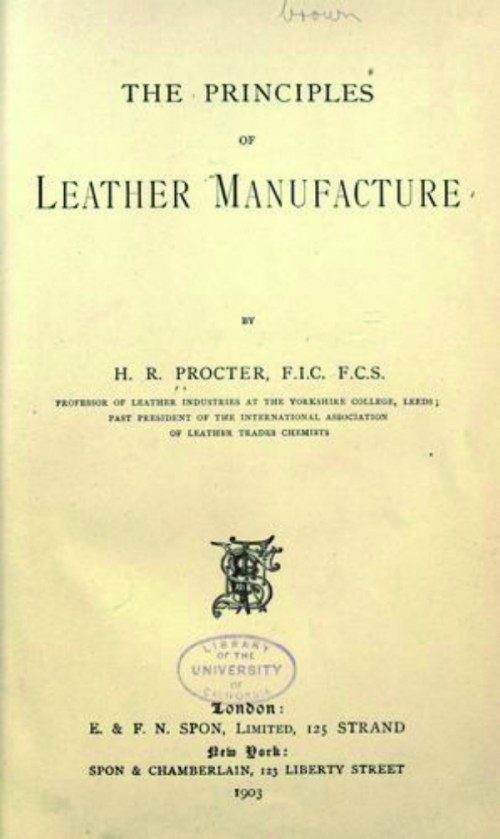 The Principles of Leather Manufacture, by H R Procter. Pictures above: Leather International

I’ve written before about the fact that the cattle hides available back in the days in many ways was superior to what we see today, it was both due to how animals was raised and due to the fact that one used hides from younger animals to a larger extent. But, then we also have this fact that we had a big industry that put in big resources to make products where quality to a large extent was the main thing, and that one could, to put it simple, do whatever it took to improve quality. If there was a chemical that could make the leather more pliable, it was used, if more chrome would mean a more resilient leather, it was used, if a labour intensive treatment would result in a shinier leather, it was done, and so on. The tanning industry evolved into making astonishing products, even if one didn’t really reflect on other matters than the end results at this stake. 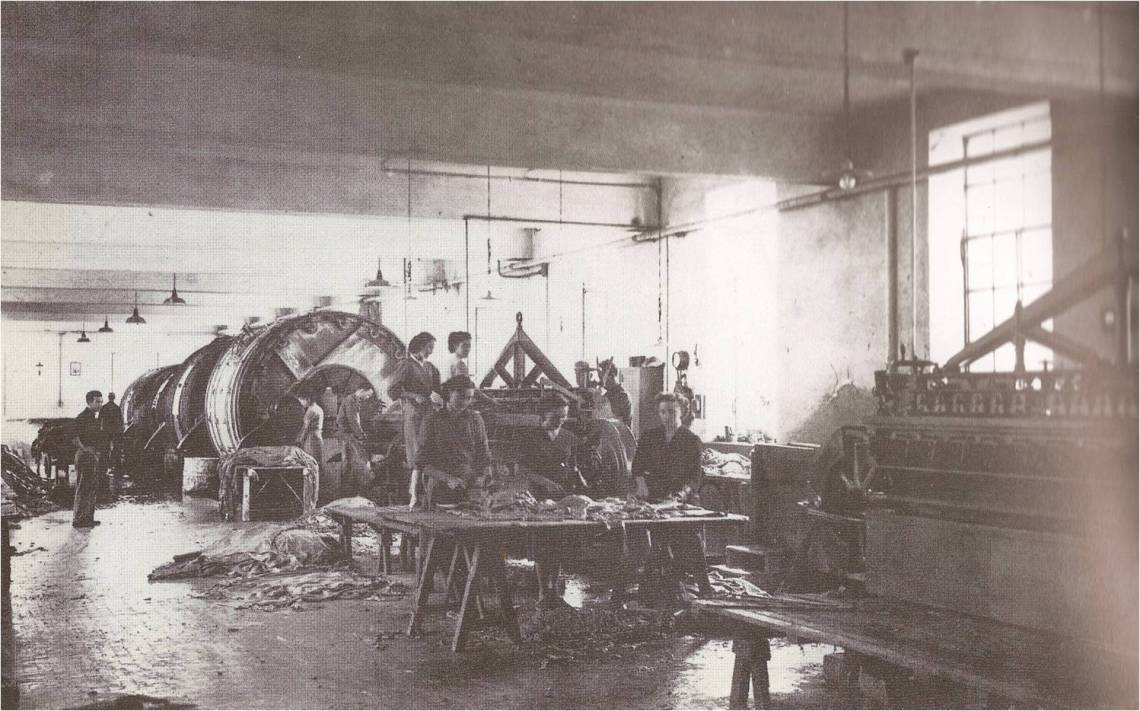 Men and women working in a tannery some time after the WWII. Picture: Leather Pavlat (also the top image)

Nowadays, tanning is a small industry in Europe and the US, and this is an area that one, in comparison, hasn’t spent much time and money in developing, compared to how it was back in the days. Of course, things still happen, but it’s not comparable to how it was. Today, most RDI of tanning is done in Asia, mainly China and India, since it’s also in Asia, and South America, that tanning leather is still a large industry. Problem here is that large part of the industry in these areas of the world are still behind where the industry is in Europe and the US, there the main focus is on producing cheap leathers, not high quality leathers. Of course, again, this is generalisations, there are great leathers coming also from Asia and South America, but those are a clear minority, and this will inevitably also reflect in what goes into research and development. To continue generalising, in Europe and the US back 70-120 years ago, RDI was driven by the leather industry to achieve better products and of course also earn more money, nowadays especially in the West most larger steps are driven by stricter regulations. One try to retain quality while keeping compliances, so in terms of quality, one could say it’s more about not losing out than improving. 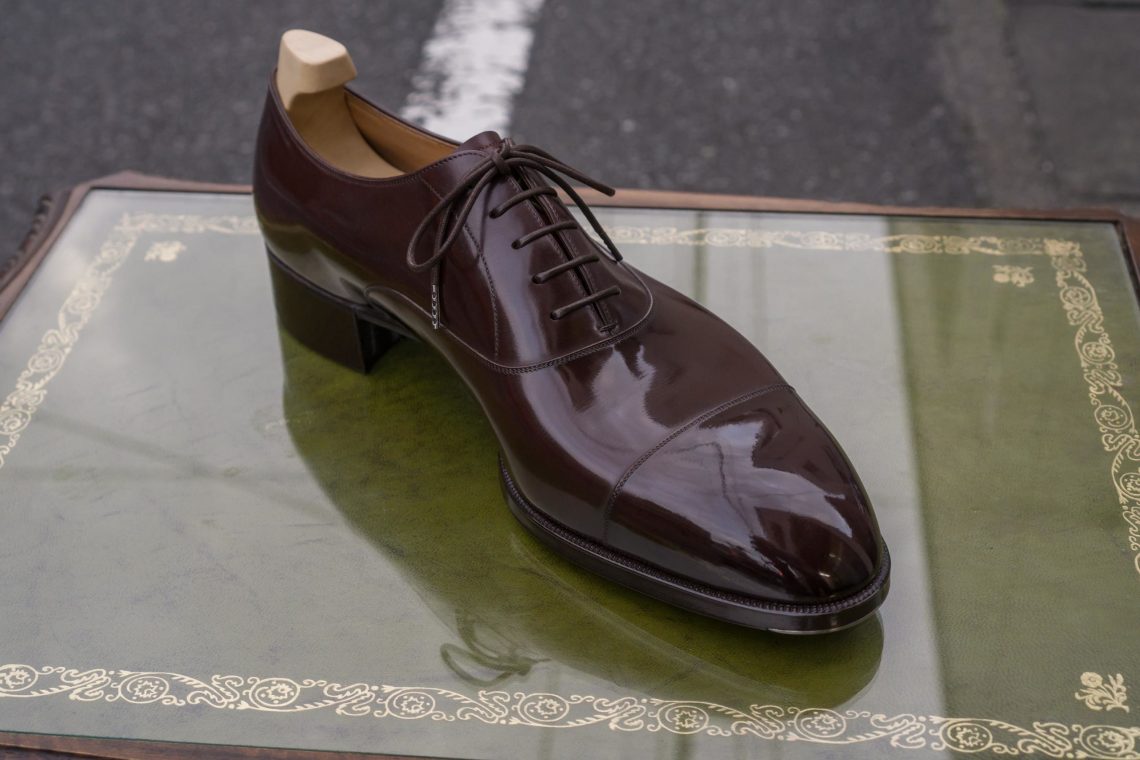 A shoe made in a vintage leather from the German tannery Freudenberg. Made only about 30-40 years ago, yet still to a quality that is basically impossible to find today. Partly due to the raw materials available also then, partly to how they were able to tan them at the time when regulations were less strict, and also since they were able to spend more time on the hides than tanneries do today. The price would be extremely expensive if the latter part would be done in a similar way nowadays, and there’s too small market for this especially in footwear where it’s most suitable.

This sounds really bad, doesn’t it? Well, for making the best possible leathers in terms of quality, sure. But in terms of being a good industry for humans and the environment, it’s not bad. In fact, it’s a necessity. So as you understand, “golden” above only refers to quality, not anything else. The world has to change, and the leather industry will have to roll with it. What’s interesting is to see where we will go from here. As I wrote in this article on vegan alternatives to leather, we are still a long way from finding something that is even close to have the excellent properties that leather has, so most likely we would do well in continue to produce leather for a foreseeable future. We can’t do it in a harmful way, but good quality products that will be great to use and last long is still what’s pursued. Combinations of historic tanning methods, along with new developments and use of synthetic yet harmless substances is likely the way forward, to create the best possible leathers with the lowest possible impact on humans and the environment.

If you want to learn more in-depth on leather and its history, a great resource is the website of the magazine Leather International, and its catalog of feature articles, white papers etc. Also the Nothing to hide website, which is a site owned by the leather trade, is a good resource, as long as one are aware of it obviously being highly biased.