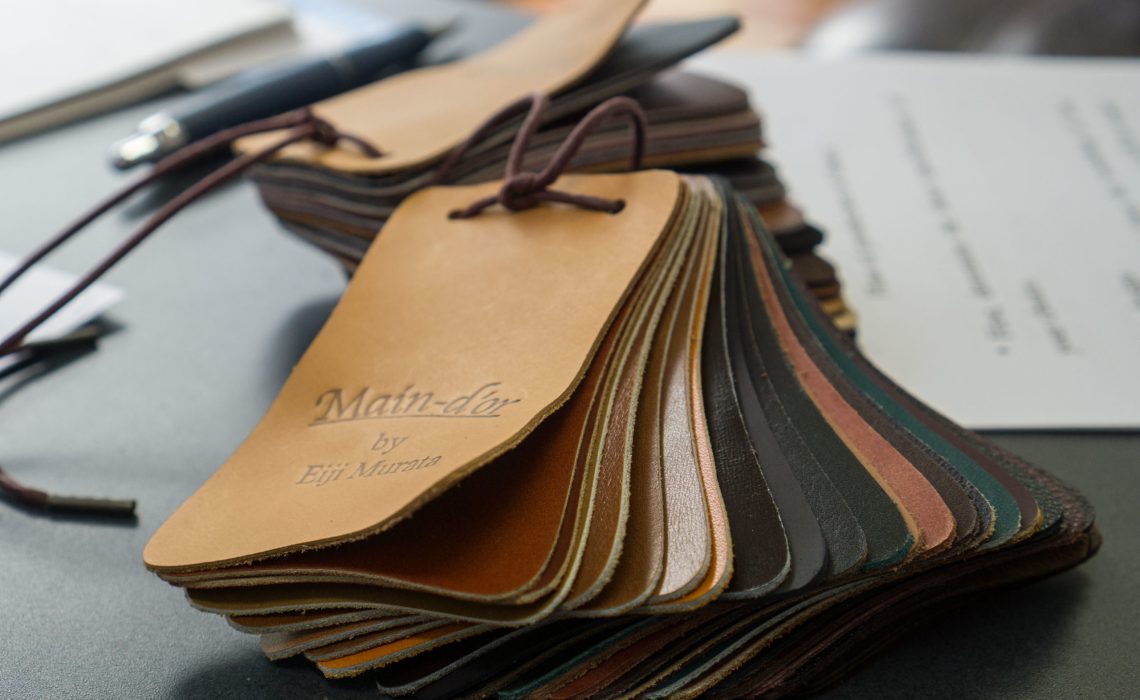 By far the most common type of leather used in higher quality dress shoes. The reason is that calfskin is soft, supple and durable. The leather comes from animals that are under the year as a rule, but this limit has been pushed during the decades. A bunch of years ago only hides from animals less than six months were called calf leather (nowadays smaller hides often goes by the name babycalf, and the smaller ones in general comes from New Zeeland today), in France nowadays they still have to be below eight months. Calfskin is standard in the vast majority of quality shoes. Smooth full-grain calfskin can be recognised by its fine pores. Picture: Skolyx

All the leather from cattle (and basically all leather from other animals as well) used in shoe and clothing manufacturing is a bi-product from food production. Chrome-grain full-grain calfskin is very easy to polish nice with shoe polish and creams. If the grain side is sanded it becomes nubuck, if the flesh side is sanded it becomes suede (nowadays most suede are splits of the hides though, learn more about suede, nubuck and roughout in this article).

Cow and ox hides are thicker and sturdier than calfskin. It’s more difficult to find perfect skins from the full-grown animals as they have lived longer and been exposed to more, so it’s often used for example for tougher boots or for cheaper shoes, in the latter case often split down so as thin as calfskin (this to be able to use the split separately and get more leather out of each hide). 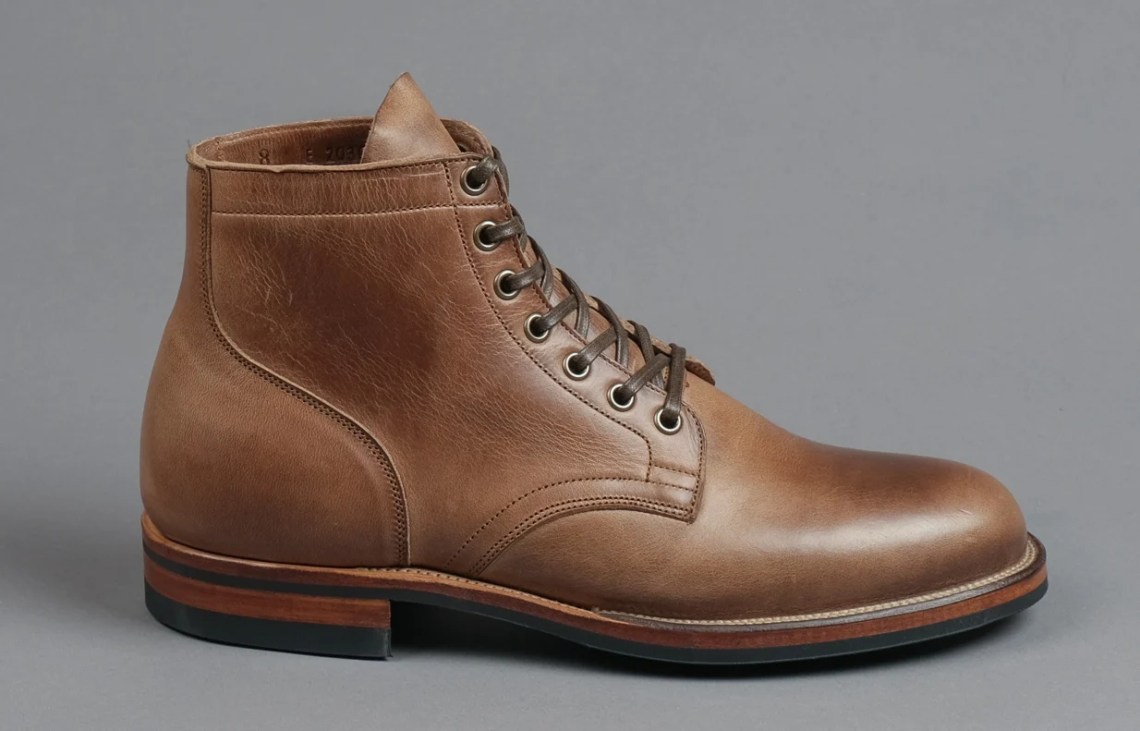 Workwear boots need to have leather that can handle a beating, plus a perfect appearance isn’t as important as with dress shoes, so here various kinds of cow hides are standard. Bild: Rivet and Hide

Durable type of leather, where the front part is thinner and mainly used for jackets or accessories, while the strips (mid back part) and the back have similar properties to cow leather, but where the pore structure is different which normally results in a different look. 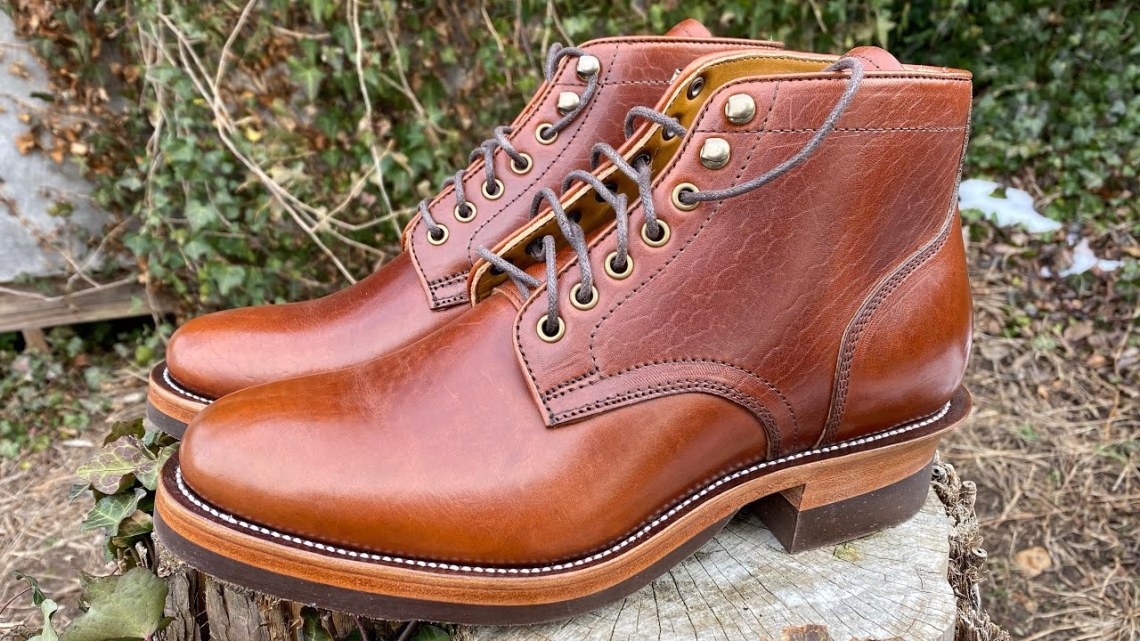 Horserump leather which has a special character, this is when the are above the shell is used. Picture: Renav Goods

The most famous type of horse leather used in footwear is shell cordovan, where the muscle membrane, the shell, under the skin of the rump is tanned in a special way (cordovan is a leather turned inside out, so also part of the grain area is left). Very durable, doesn’t crease but gets the characteristic rolls, shiny dense surface.

This material has become more common in shoes in recent years, since new technology has made it easier and cheaper to chrome tan also pigskin. Soft and supple, easy to dye, relatively thin meaning it’s more common for women’s shoes, but also found on men’s shoes. 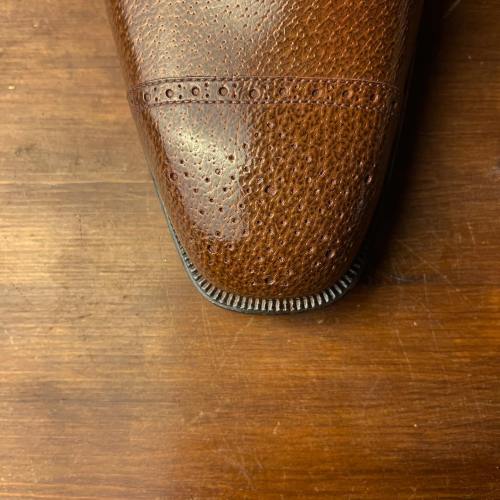 Pigskin has a lot of character. Picture: Calzoleria Carlino

It is mainly the belly and side parts of crocodiles and alligators that are used, where the skin is soft and flexible. Both crocodile and alligators are endangered species, but have seen a healthy increase after CITES (Convention on International Trade in Endangered Species of wild fauna and flora. One should only buy exotic leathers that are CITES certified) went into effect in the 70’s. 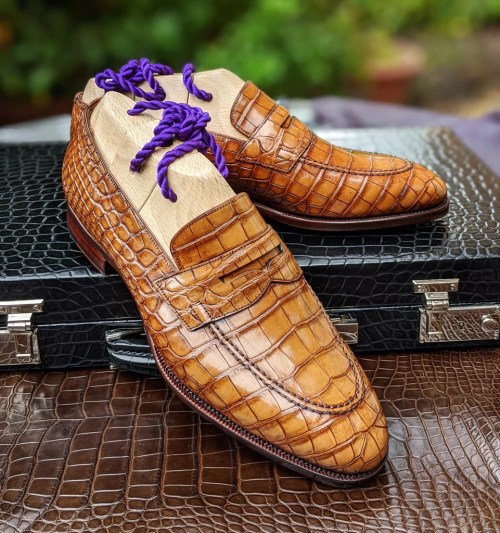 The crocodile skin used in shoes and accessories generally comes only from animals bred on certified farms, mainly in Australia, Asia and South Africa. An expensive type of leather, which probably is the leather type most associated with luxury. Soft and supple leather, which has a special character with circular ridges where the ostrich feathers used to sit. Ostrich leather shoes are comfortable since the soft leather moulds well to the foot and breathes very well. Ostrich skins also come from animals bred on special farms. They are not that expensive and can be found at relatively reasonable prices. Very hard and durable leather, which is difficult to work with and therefore shoes in stingray are usually made as wholecuts or models with few different parts. When you stitch it, it has to be done in-between the “pearls”, since otherwise the needle breaks. Expensive, both because of the craftsmanship required to make shoes from the material, and because stingray leather is relatively rare. 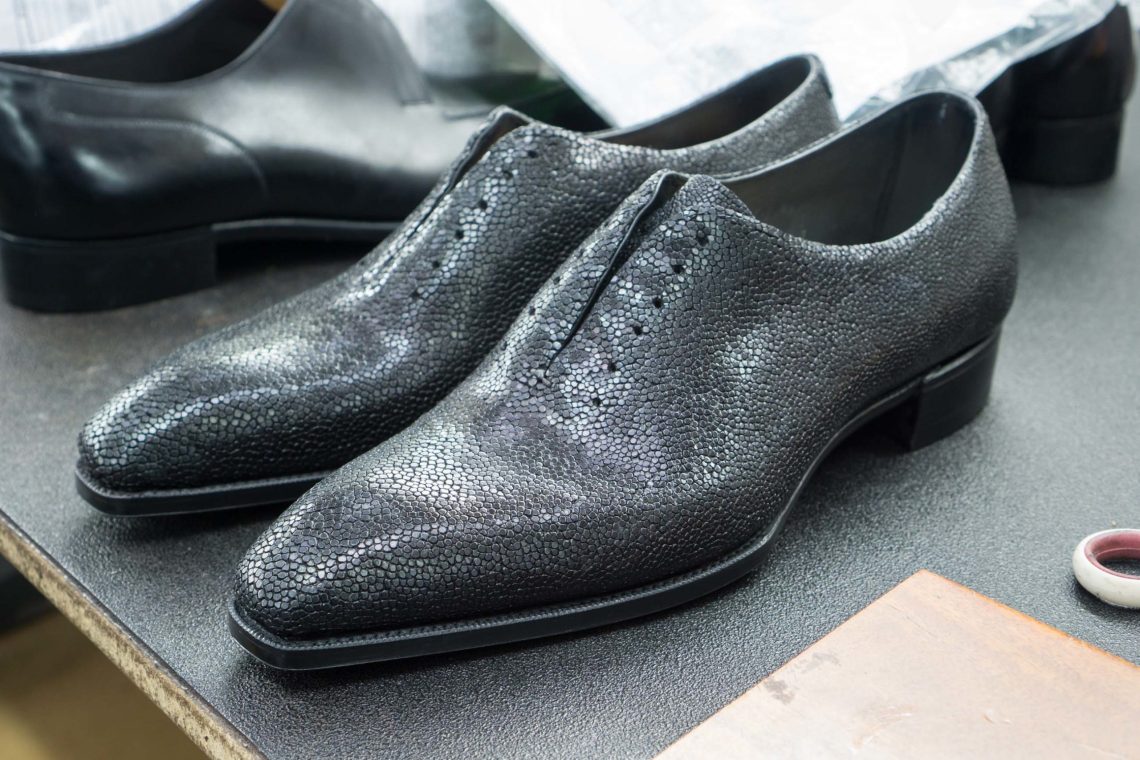 Is relatively reminiscent of cattle skin, but thinner and with a different finish that is softer and smoother before being smooth pressed, and which usually creases a lot. Since it’s still a durable leather it can make for some comfortable boots and stuff like that. Has slightly different looks and characteristics depending on the type of lizard it’s from, but in general it’s a slightly more delicate leather, and as lizards are usually quite small, it often takes skins from several animals to make a pair of shoes. Very soft leather, so soft that shoes aren’t too often made from it and the material is better suited for gloves, for example, but there are exceptions. Either harder leather is used as a lining to give stability to shoes with deerskin, or one do for example softer loafers and stuff like that where the leather works well. For soft shoes like Belgian loafers deerskin is a perfect material. Picture: Skolyx

Similar to deerskin, where reindeers essentially is the same type of animal but who lives further up north, meaning they withstand more harsh environment with lots of cold etc. Most reindeer leather used for shoes comes from Russia. Cleverley has made these bespoke shoes in the legendary Russian reindeer leather which was found on a ship that sunk in 1786. Picture: Permanent Style

The skin of the peccary, or javelina, is similar to deerskin a very soft leather that is common in gloves, but can also be used to make shoes. It’s very hard wearing, makes it a good choice for example for shafts of boots and similar. Has such loose fibres that it’s basically impossible to polish to any shine. 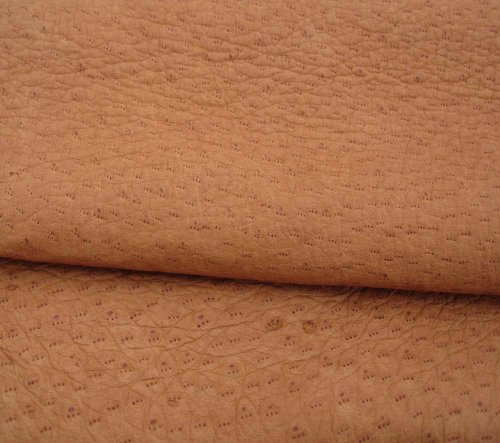 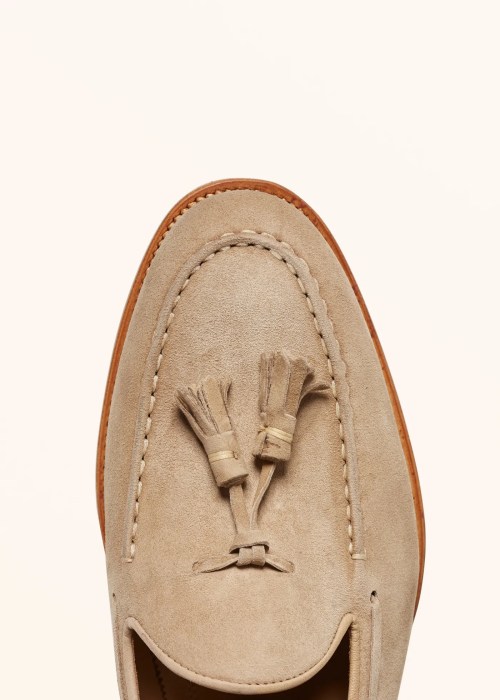 Very durable leather, which is very rare, and therefore expensive. It’s almost like an armoury for your feet wearing footwear in sharksin. 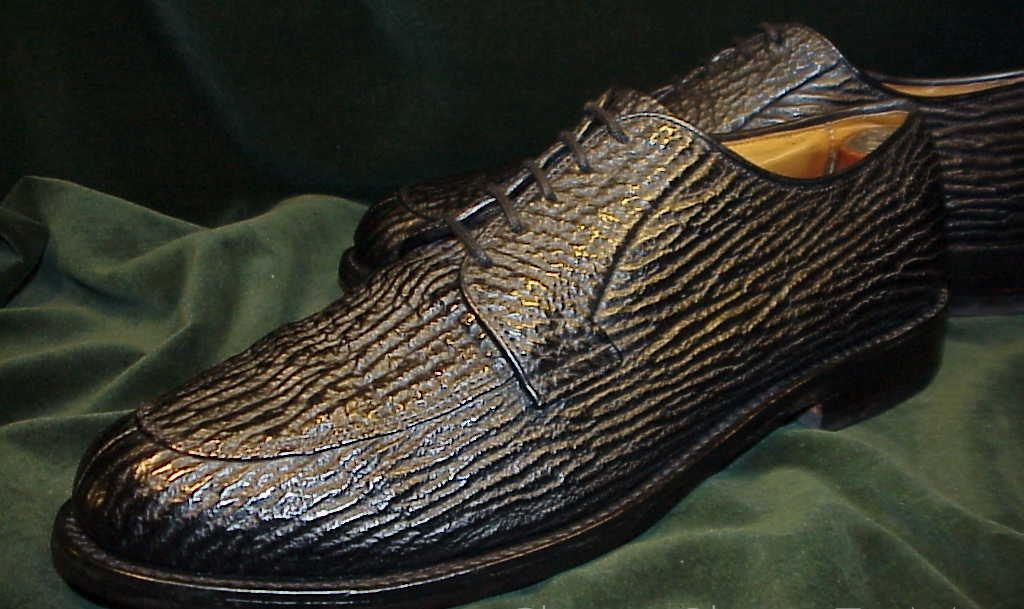 A pair of sturdy derbies in sharkskin that will probably last for generations. Picture: Classic Shoes for Men

In an upcoming article I will cover different tanning and treatment methods of the leather.

This article was originally published on the Swedish version of Shoegazing back in 2013.