History – The military’s affect on the shoe industry 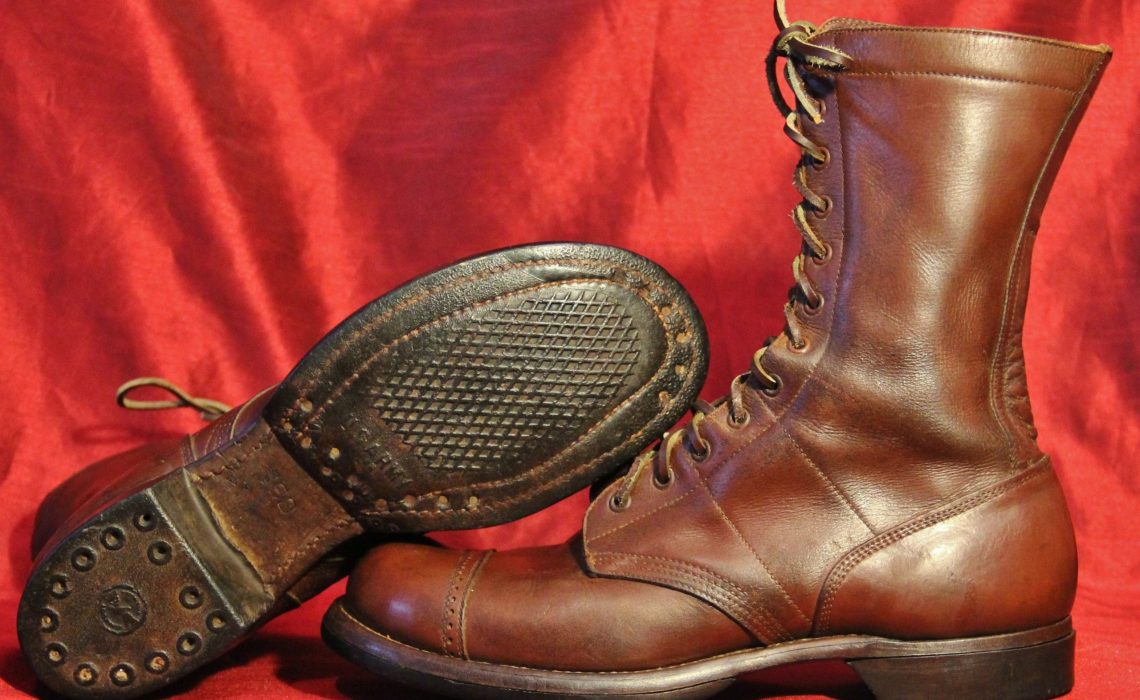 Through history, few areas have had the same economical strengths as countries’ military, and with economical power comes the possibility to develop and produce things. That’s why the military greatly has affected development and innovation within the footwear industry through the centuries. Lots of classic shoe and boot models derive from the military, the military has played a vital role for many shoe factories through the years, some of the most effective shoe shining techniques were developed in the military, and so on. Learn more in this article.

Now, this is just an overview of some various takes on footwear and military. For those in the know for real, or those who are really interested, there’s of course tons of more info to dig into. After all, all things military is covered into the smallest detail, and it boils all the way down to what’s worn on the feet. Just google around, and you’ll see. But as a start, enjoy this article.

The military and the shoe manufacturing
It sort of goes without saying that in the military, good equipment that are durable, comfortable and practical is a necessity.  This goes for the footwear too. When you’re in something as severe as a war situation, you don’t want to have additional problems with for example feet getting unnecessarily wet and cold, or have soles that are slippery, or even worse soles or heels that comes loose, and stuff like that. Now, all military footwear certainly hasn’t, or is, perfect, but the demand on them and the endeavour to solve good and practical things to have on the feet of the soldiers have certainly been important in the development of the footwear industry. The military has resources, in many countries extensive such, this means that they can fund development and production of proper stuff. 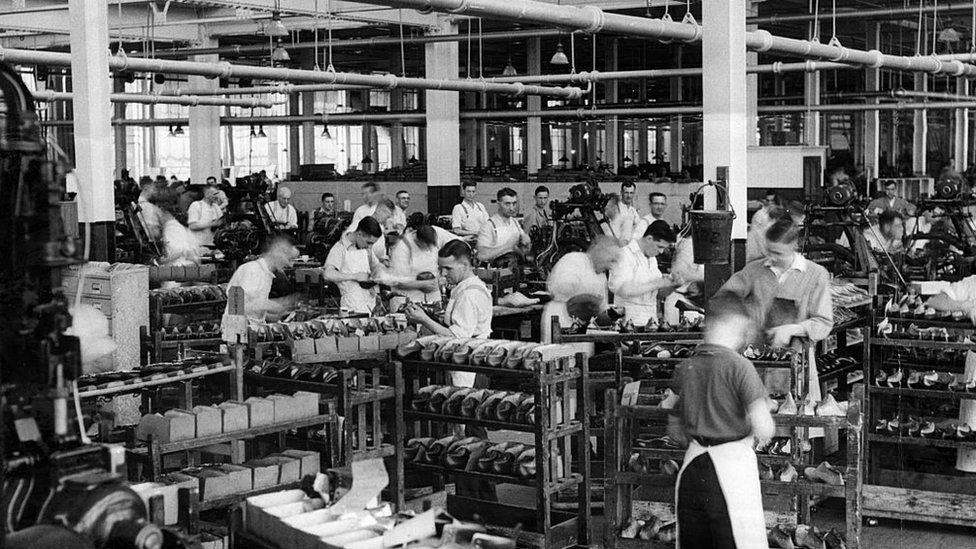 Already back in ancient Rome the military had some of the best shoemakers in the empire make the footwear for their armies, like the classic sandal boot type caliga with thick hobnailed leather soles. And it has continued like that through the centuries. If you visit basically any of the factories in British Northampton, who all were around during World War I and World War II, they have old pairs of some historic boots they made for the military. Of course, wartime wasn’t easy for production industries, but collaborations with the army did save them and in some ways also developed them. In Northampton 70% of the shoes used by the British army during the two world wars was made. During WWI half the population in Northampton worked in the shoe and leather industry, and a factory like Crockett & Jones doubled its production during the war with lots of women being employed by the factory. It’s not hard to understand why this area is still the centre of the shoe industry in the country. 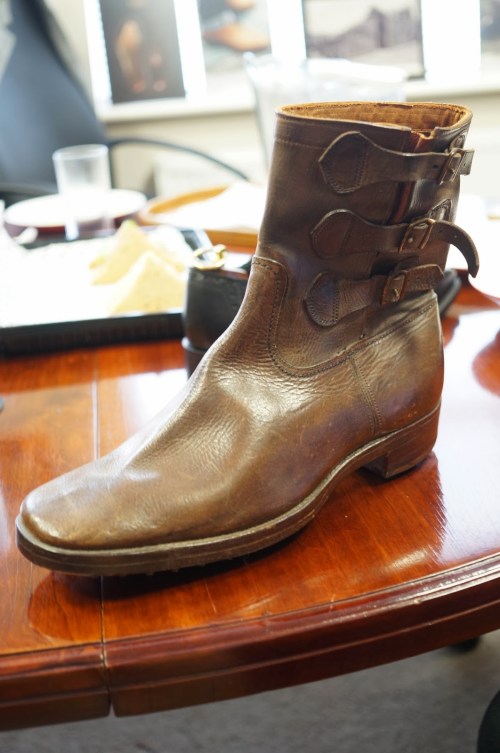 An old army boot which is found in a glass cabinet at the Loake factory in Northampton. 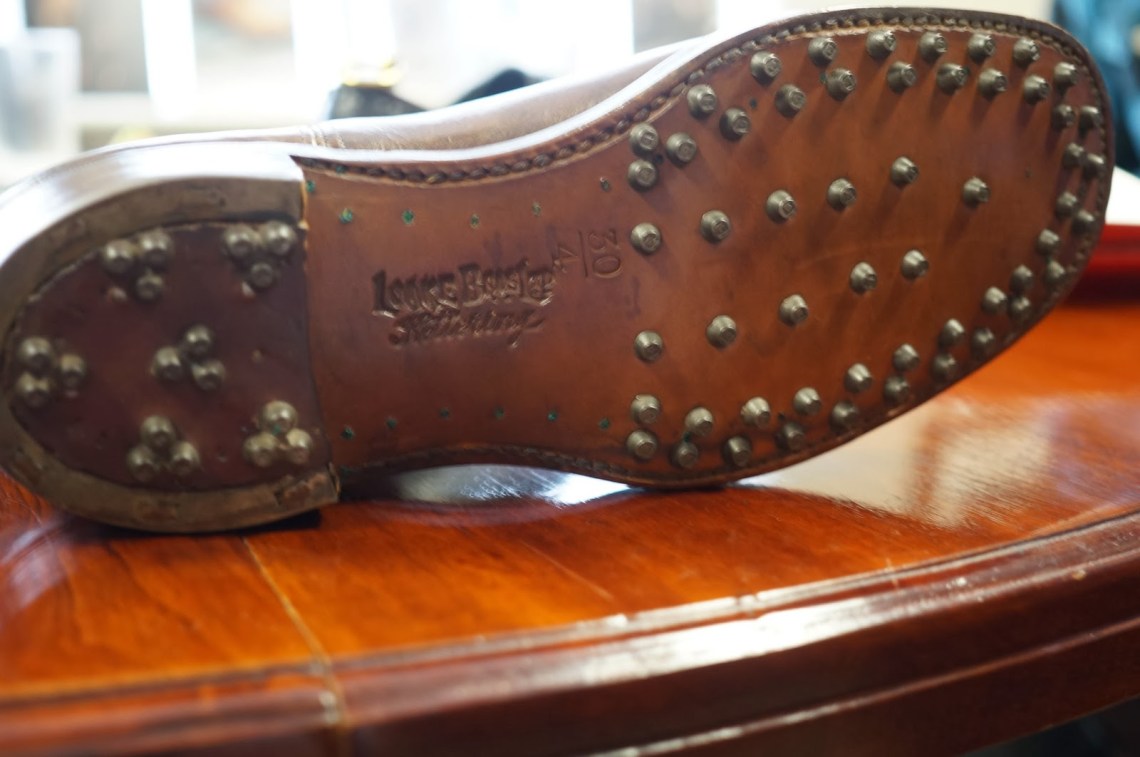 Hob nailed soles and heels, which was standard on military boots for a long time.

Shoe models deriving from the military
If one are to look into certain boots and shoes that has its background from the military, there’s quite a few. Of course, boots are the most common and direct linked ones, but many lower shoes have in turn been developed from these. Military footwear, as much other things, started off solely as utilitarian items, but went on from that in many ways.

We start with a given one. Service Boots, which sort of is a front runner in the workwear boot segment today, is in fact a military boot from the beginning. It has its base in a derby boot type which sort of was standard in the 1800’s and early 1900’s in many armies around the world, with different variations. The “original” Service Boot had a different name though, it was called, Trench Boot. During the early part of World War I, American soldiers were developing a so called “trench foot”, which basically means that the foot rots due to long exposure to moisture and cold temperatures. Then in 1918 General John Pershing of the US Army made changes to the predecessor, the Russet Marching Shoe, among other things with thicker leather, a more waterproof construction, a triple-thick sole, iron toe cleats etc. This boot together with treating the feet better with massage and oils, made the problem with trench foot go away. The Trench Boot (a bit ironic that what was at least partly a solution was named after the symptom), sometimes also called Pershing Boot after its enabler, was then developed further during the later parts of the war and the name Service Boot, or Service Shoe, was established. Around the same time brand’s like Canadian Viberg made versions of the boot type specialised as proper work boots. 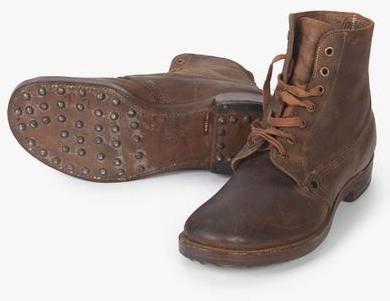 A 1918 version of the Trench Boot, later “transformed” into the Service Boot. Picture: Authorized Boots

Another given boot model here is jumper boots. Interestingly, the type of boots that we see go under this name today isn’t that similar to the original military boot with this name, in a way it’s more similar to what traditionally goes under the name Ammunition Boot, but that name is basically gone today for common footwear. The original jumper boot’s proper name was Jump Boot, and it was a high lace-up derby boot with brogued cap toes which the US Paratroopers used during WWII. They were made to give extra ankle support for rough parachute landings, and were designed by Lieutenant Colonel Yarborough. At this time it was rare with ankle high full leather boots. Towards the end of the WWII, this boot was replaced with the M-1943 Combat Boot which had the upper part lacing removed and instead a double buckle strap was covering the calf. 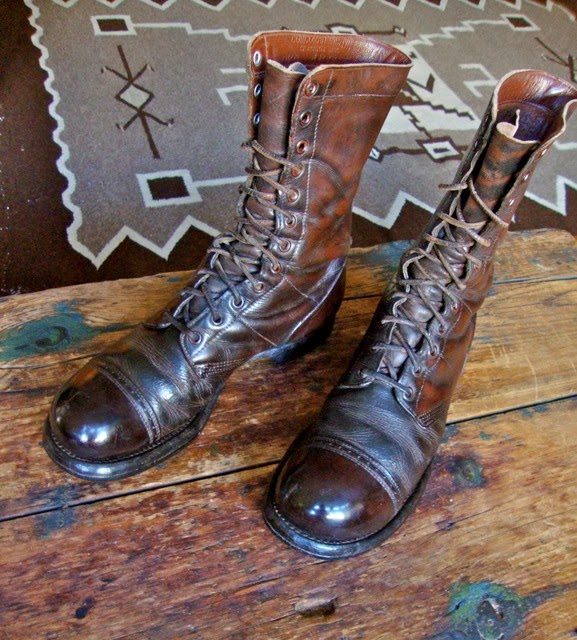 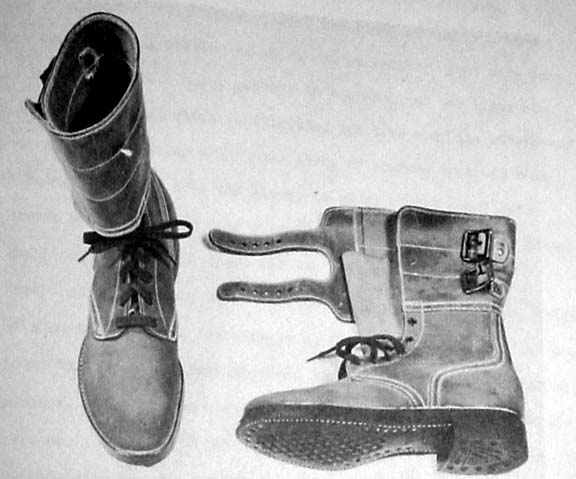 The Ammunition Boot was a more traditional combat boot, made for the British army and being standard for most soldiers from 1880 all the way up to 1950 (it’s very closely related to the Trench Boot / Service Boot), although small developments of pattern etc. took place during the years. It’s an ankle high derby boot with a plain cap toe and heel counter, often made in embossed grain leather, especially later into the 1900’s. This is much more similar to what we today call a jumper boot, even if we sometimes see sort of mixes between the two, with the lower shaft of the Ammunition boot yet with the brogued cap toe of the classic Jump Boot. The naming of the jumper boot model we’ve seen the last decades likely comes from the British shoe industry taking the American name over implementing it to the British boot version, but sources for that are rather uncertain. 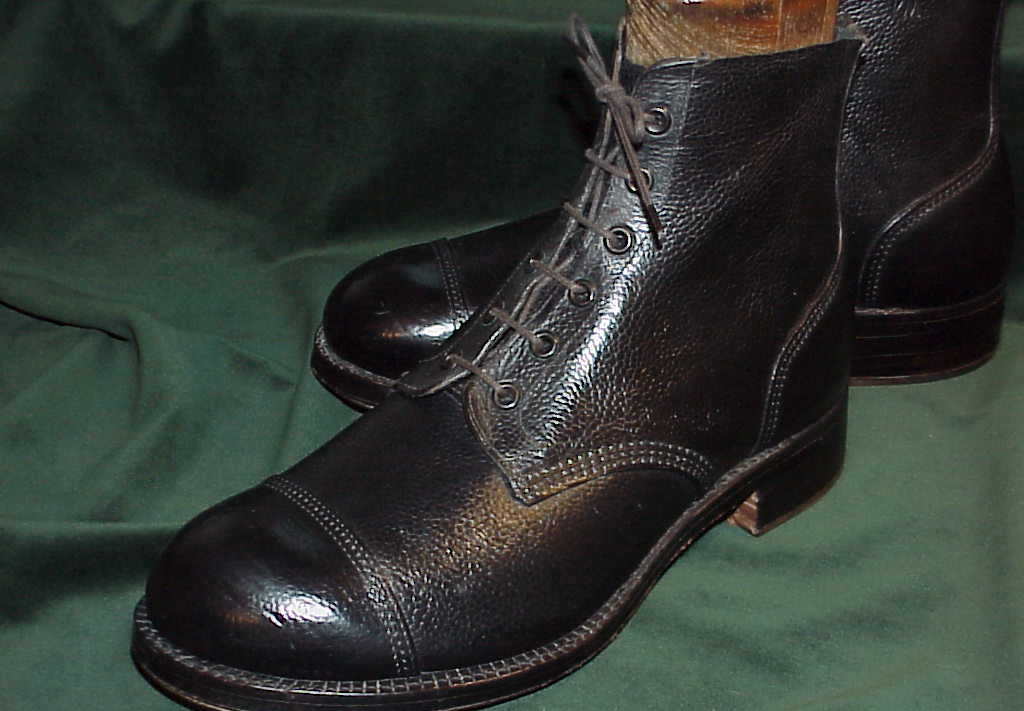 Traidtional Ammunition Boot. Which as you can see really looks like what we refer to as jumper boots today. Picture: Classic Shoes for Men

Another classic shoe model deriving from military is the Chukka Boot, where the “other” name for it, Desert Boot, is more in line with its first predecessors. The first chukka boots were, allegedly, worn by soldiers in India when off duty, back in early 1900’s. The boot then made its way into the British army and was worn by soldiers in the Western Desert Campaign of WWII. The term desert boot was coined by the British company Clark’s. In 1941 Nathan Clark served for the British army in Burma (now Myanmar), where he saw some officers wearing these sand coloured, suede low cut boots for downtime. Clark found out that this type of boots first had been made by cobbler’s in Cairo, Egypt, for South African soldiers whose old-military boots had failed them in the desert terrain. To get something that was lightweight and had good grip, they had Cairo cobblers make this boot with a suede upper on a soft crepe sole. When Nathan Clark got back to Britain, he introduced the style in his family’s company, Clark’s, and the Desert Boot was launched in 1949. 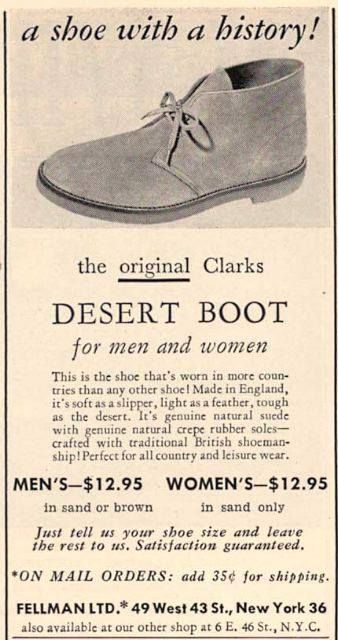 Charming ad for the Clark’s Desert boot, from the 1950’s.

Transitioning fully over to the casual side of things, and sneakers, since also this type of footwear in some cases has a background in the military, not only sports. Looking at a specific model which is quite in vogue at the moment, we have the German Army Trainer, GAT. Ordered by the German army in the 70’s from Adidas (Or was it Puma? Oddly enough this still seems to be a bit unclear), the name back then was formally BW Sport, and it was used as training shoes for the soldiers. The excellent quality of these sneakers, with the characteristic grippy gum soles, made them very popular on the second hand market after the cold war had ended and ex-soldiers sold off their stuff to thrift shops, and surplus companies got a hold of leftover stock. You can still get hold of the original ones. 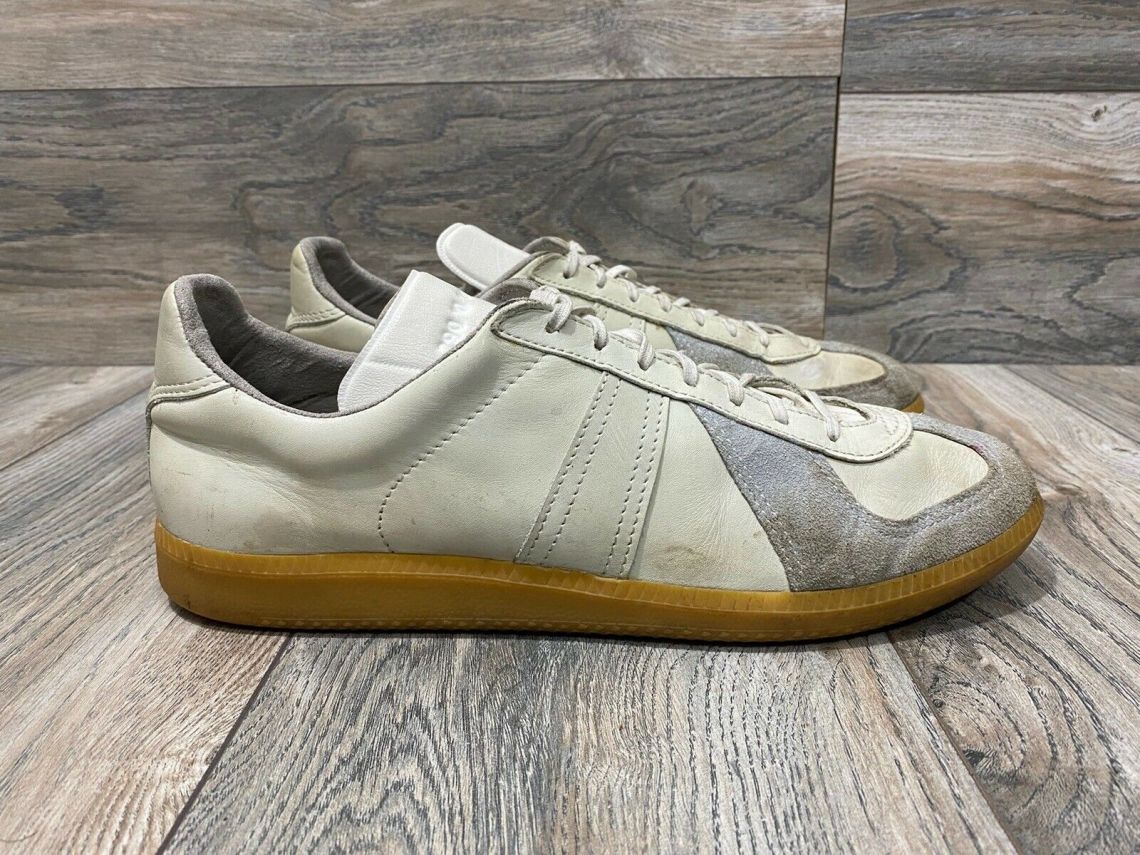 Shoe shining techniques coming from the military
In the army, taking care of your gear has always been important. Starting off as a necessity to avoid any problems during war situations, parts developed to being mainly for impression, to show determination, and so on. One of these things were the development of shining the boots to an extreme gloss, intended to show off during inspection. Many techniques used by professional shoe shiners today was once come up by recruits trying to make it as easy as possible to achieve an as high shine as possible. It’s a reason that other names for “mirror shine” is “military shine” or “parade gloss” (during military parades the most shining toes were desired), although most common in the military was the phrase “bull polishing”, “bulling” the shoes. The term bulling is an acknowledgment that this is an undertaking intended to “bullshit” the inspector of a cleaned item in regard to its normal state of presentation, sort of. 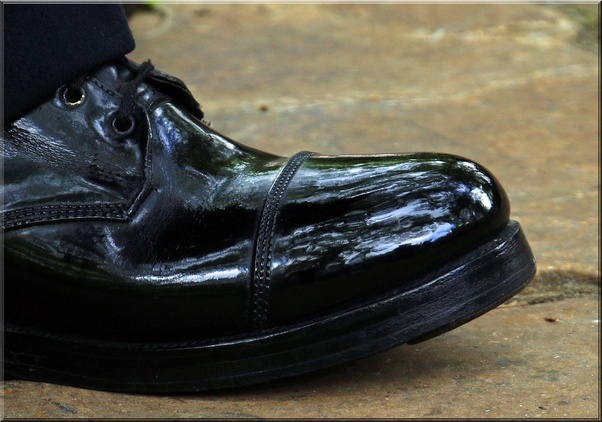 There’s lots of stories on what comes from the military, and from which country’s army it started off in, and so on. To difficult to pin out what’s fully correct here. But, I can summarise some key things. The use of only fingers to build up the shine allegedly started off as a thing in the army, to quickly clog the pores with wax, and then head over to using a cloth and water to start building the wax layers. The thing to set fire on the turpentine in the wax to make it more pliable and easy to work with, is another thing. And my personal favourite, the use of nylon stockings to both finish and revisit a high shine.

Now, I’m sure a lot of you readers have your other examples of shoes and boots connected to the military stories, and know more than what I’ve gathered in this article. You are more than welcome to share in the comments section below.