The picture – The toughest of leathers 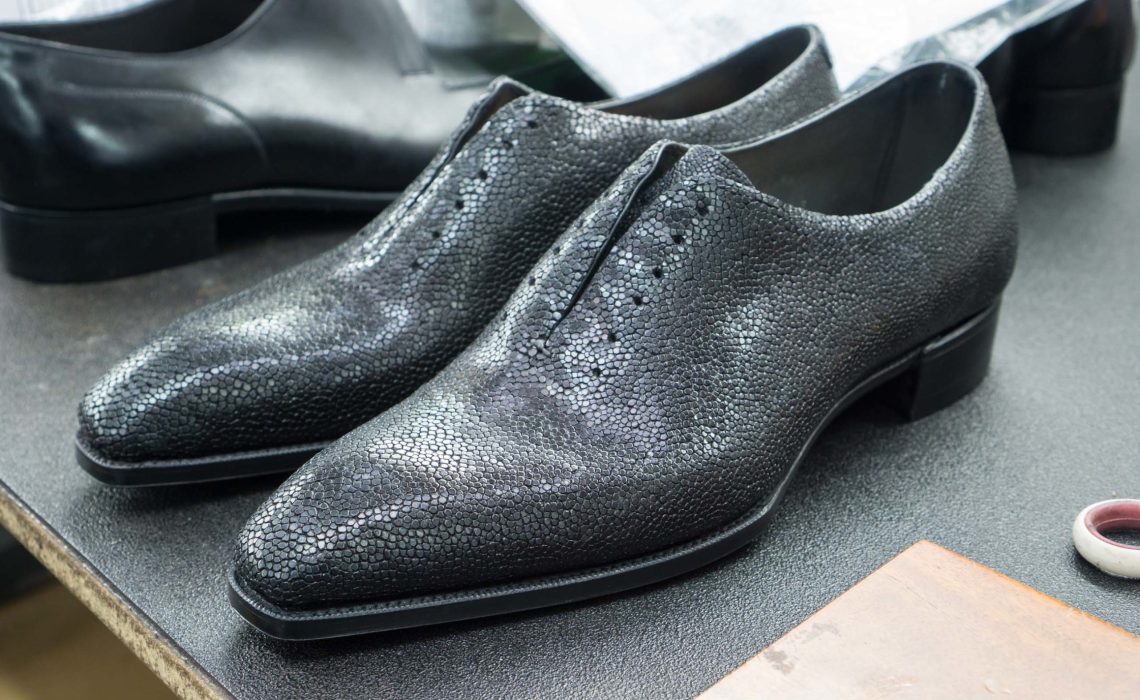 There’s many leathers that are durable in various ways, but most fall short to the natural armour, the stingray skin. Here’s a black wholecut which is about to be finished in the Gaziano & Girling factory in Kettering, Northampton. Below a crash course on the properties of this special leather.

Stingray leather has the same base as regular cattle leathers, with a collagen fibre structure (similar to the corium of calf and cow hides). But instead of a grain top layer, we have these rock hard pearls, denticles, consisting of a hard dentin base and an even harder enamel top part. Sort of similar to teeth, and made to protect against just that, the teeth of predators. Stingrays only have this armour skin over the body, where the organs are to be protected, which is why stingray hides are relatively small in comparison to the full animal.

There’s two types of finishes seen of stingray skins, one where the pearls are left as is, giving an uneven, caviar like surface. One where the hides are sanded for a more even, smoother surface, which we see on the G&G shoe here and which is most common for footwear. Here the hardest part, the enamel, is shaved off and then buffed to shine, so it’s actually less strong than unsanded skins, still very hard stuff. Sanded stingray skins are either dyed only before sanding, which means it will be rather pale with dye only in between the denticles, or after and then have a more solid colour, like in this case above.

When one cut and stitch stingray, it has to be done in between the hard denticles, making it a very complicated leather to work with and why you mainly see wholecuts and other models with little stitching. If you don’t like creases stingray can be something for you, since the denticles obviously don’t crease at all, what mainly appears is like often rather subtle lines in the bent area where the denticles are pushed against each other.