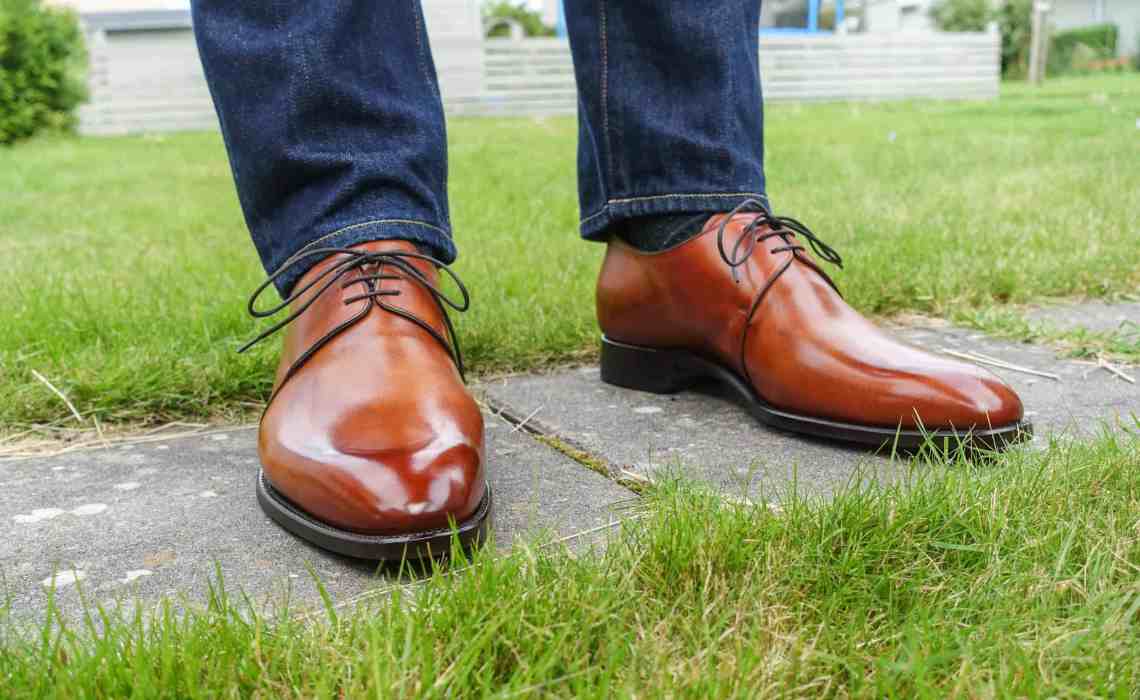 Portuguese Carlos Santos is a manufacturer which has buzzed a little under the surface for many years, but never really been established widely. Next Saturday they are visiting the Shoegazing Super Trunk Show in Stockholm, and to make you and myself a bit better informed of them, here is a review of a light brown Goodyear-welted 3-eyelet derby from their standard line. 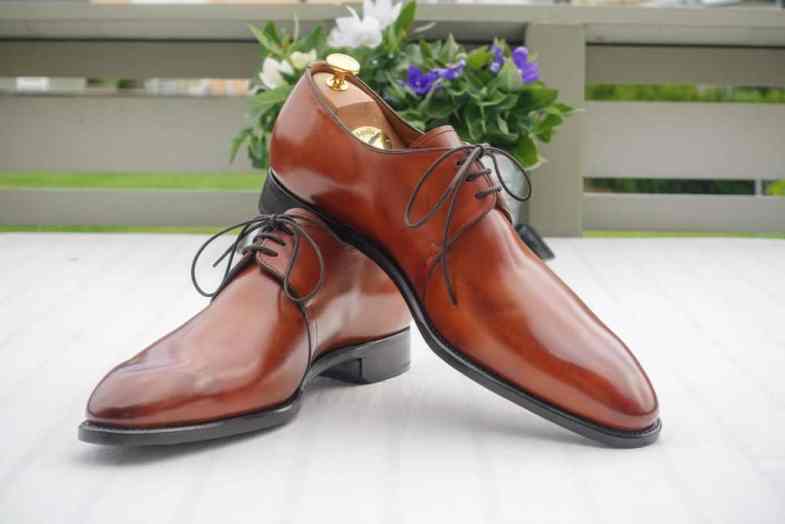 The shoes being reviewed this time.

Carlos Santos was founded in 1942, but received its present name a few decades later by the company’s mentor and owner, who is still highly involved. It is housed in the north of Portugal in São João da Madeira. This is Portugal’s center for the footwear industry, a bit like England’s Northampton, Italy’s Marche, or Almansa in Spain. Carlos Santos’ factory is relatively large and makes about 2250 pairs a week. They have mostly focused on making shoes for other brands, but also had their own brands with more or less emphasis over the years. Among other things, they have had a collaboration with the super dandy Marc Guyot, and they run the brand Mack James as budget/midrange brand for many years, but it is now gone and moved in under the Santos own name. This is also a bit of a problem that the company has had, that the business strategy has changed a lot over time. 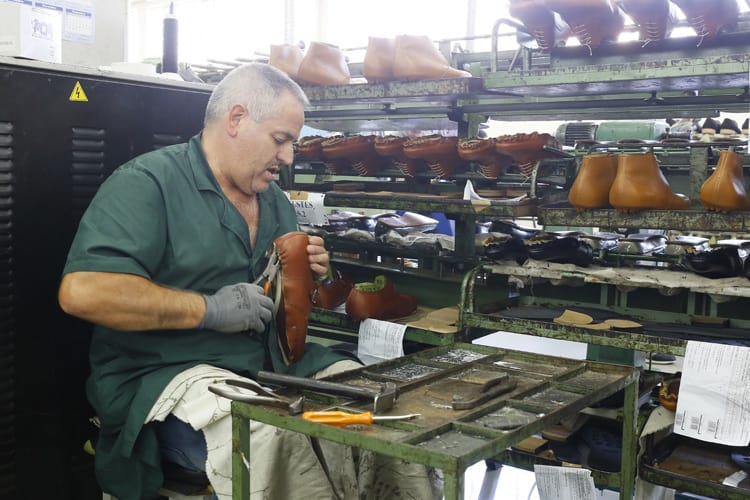 From Carlos Santos factory, where a pair of shoes from the Hand Grade series is being lasted by hand: Picture: Vestirse Por Los Pies

That the factory produces fine shoes is something that many have testified about, among others Parisian Gentleman compares their Handcrafted line with premium producers such as Edward Green and John Lobb Paris. They are Goodyear welted with closed channel soles and fiddle waists, and cost about €600. Carlos Santos standard series consists of Blake stitched and Goodyear welted shoes in the price range €280-400, from which my pair that is reviewed comes. I saw Carlos Santos shoes at the Micam fair this spring and was quite impressed by what I saw, it felt as clearly affordable shoes in all the levels they are working in, and this was bit of the reason I wanted to bring them to the super trunk (just for the record, Santos and all other shoe manufacturers comes to the super trunk for free, hence I have nothing to gain from how they sell at the event). 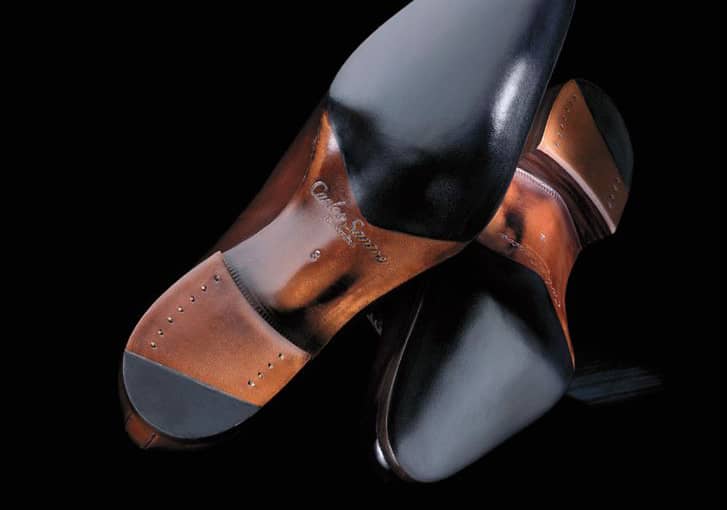 Carlos Santos shoes are not really easy to get a hold of, at least not in the current situation. There are some retailers in Portugal and around the world, some of them are online but none of them is any well-established online shop. However, they to work on their own online shop which is planned to be launched an this autumn, which will make it significantly easier to order their shoes.
The main focus now is a kind of MTO service with patina. You choose the model and size, and choose the type of patina or color you want, and within a couple of weeks to get then the shoes delivered. 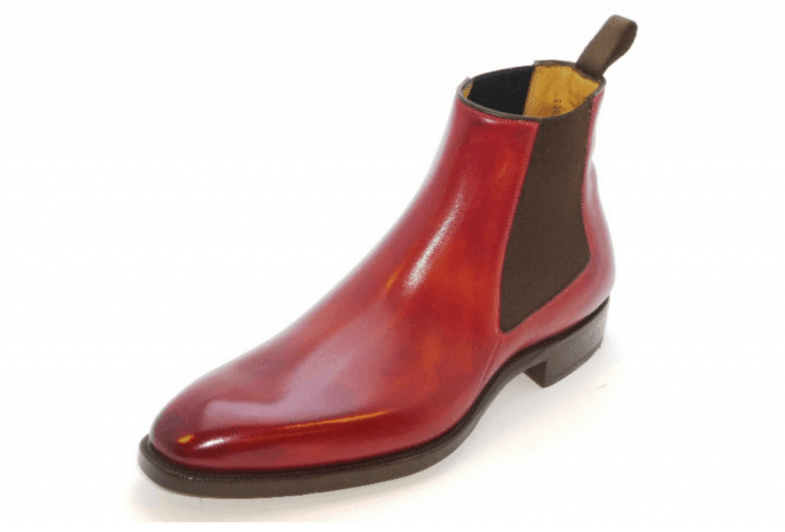 A chelsea boot from their standard range, also made on the Z160 last and in the shade Alentejo.

The model 7201 is a 3-eyelet derby made on the last Z160 which is an almond-shaped toe. I chose to get them in the shade Braga Cognac, which is a hand painted light brown color with shades of chestnut in it. It is made with a single leather sole with an open channel for the sole stitch and with a slightly bevelled waist. In the shoe box they are delivered in are two shoe bags, a shoe horn and a small brochure on about the brand. 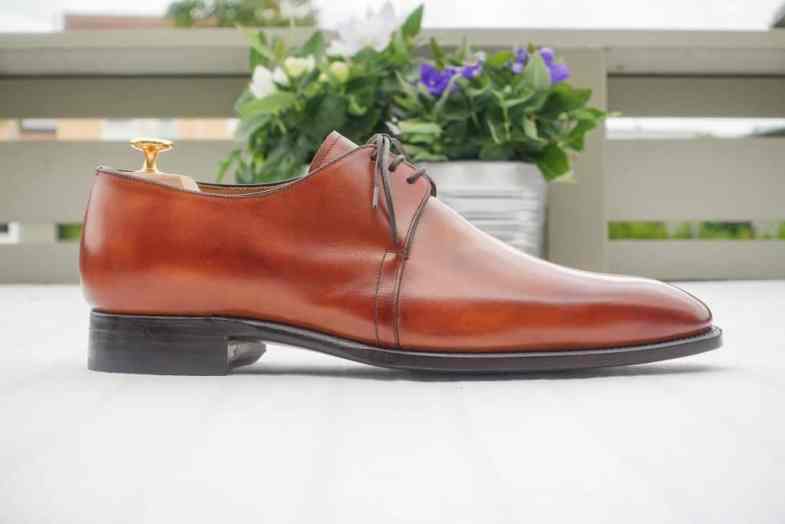 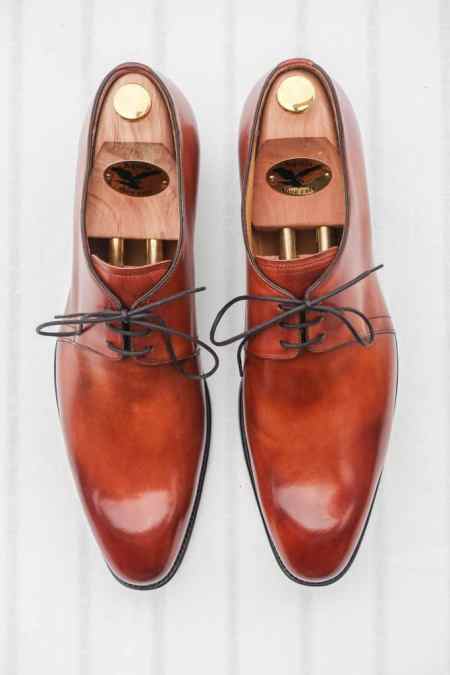 The Z160 last has an almond shaped toe and is slightly elongated. 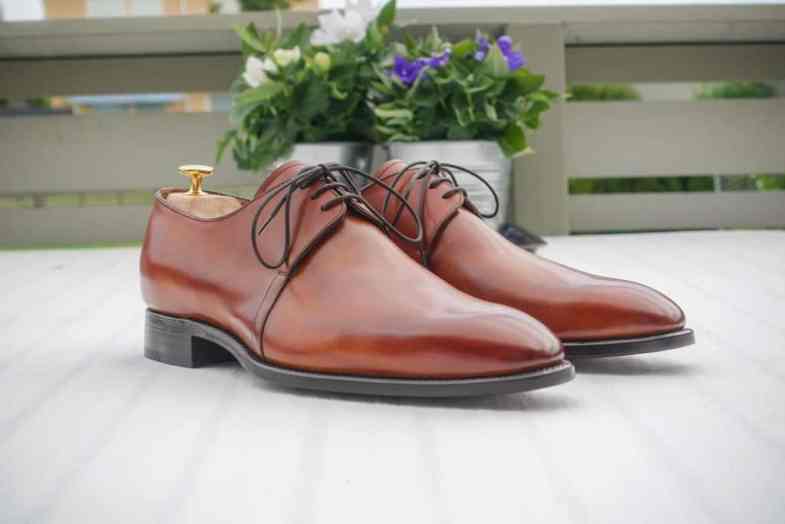 I have not done anything with my shoes before I took the pictures, they came with a unusually high shine and with a great depth in the color.

Carlos Santos is only using French calf leather, mainly from the tanneries Du Puy and D’Annonay. The models which are hand painted are built with raw crust leather, and the thus has an inventory of non-dyed shoes in all sizes (that’s why delivery time is as fast when ordering). The shoes are painted in the chosen hue and then shipped. And it is the color that is the thing that stands out most on the shoes, it is made to an unusually high standard for shoes in this price range. Certainly there are patinas among other producers in this and even lower price ranges, but it is often clear that it is cheaper shoes with a little simpler and faster made patina. I don’t get that feeling with these, and the shoes are also polished toa  really nice shine right out of the box which also raises the impression of them.
Now I have not had time to use the shoes so very many times, so it’s hard to know closer how they will age with time, but the leather feels soft and pleasant with normal creasing. 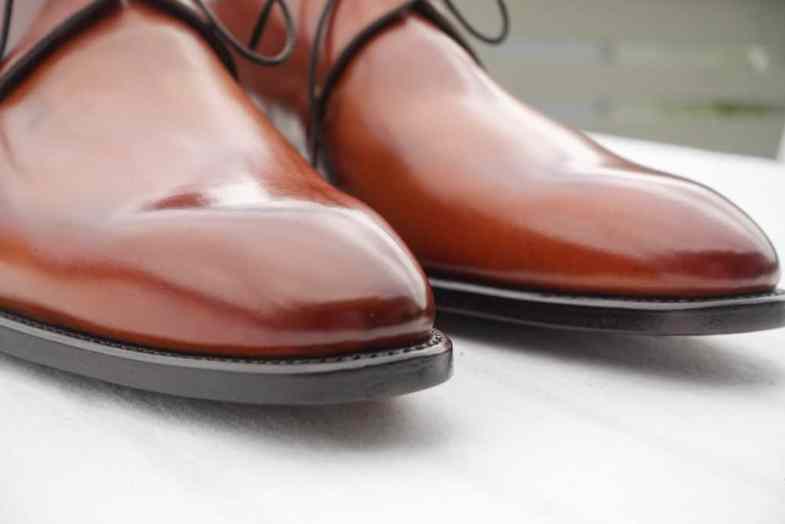 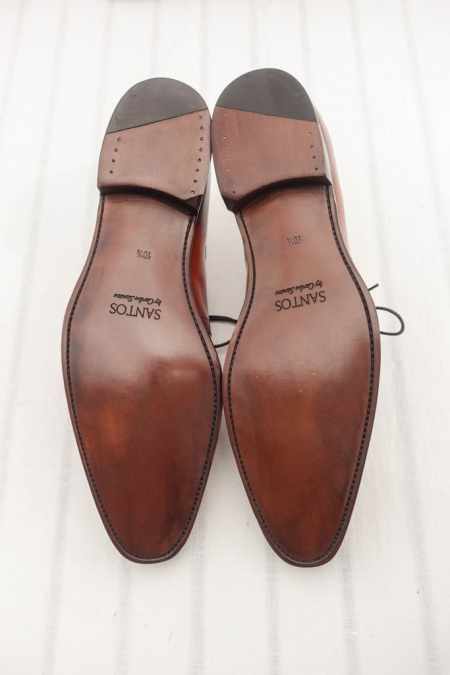 The soles with open channel. 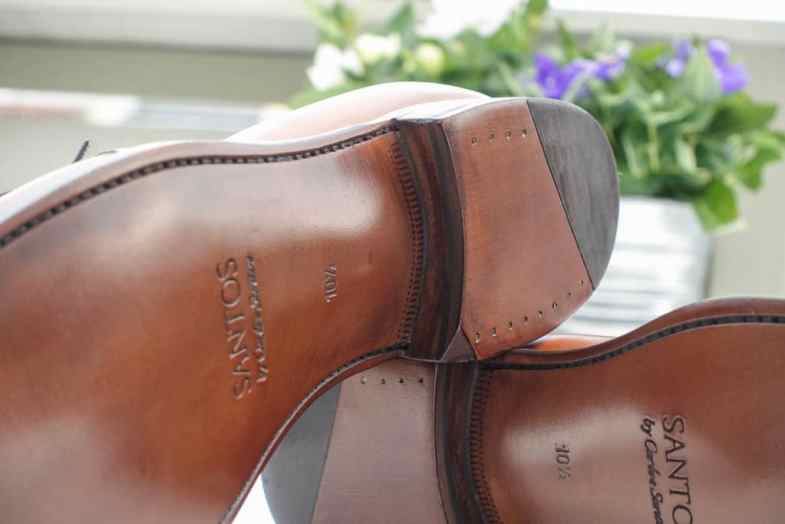 These shoes are made with a Goodyear construction with single leather soles. The waist has a slight bevel and is relatively narrow, and the sole stitch is in an open channel in the sole. When many competitors in similar price range nowadays has closed channel soles it is a bit of a pity that these don’t, but it’s more about feeling than function. All Carlos Santos’ shoes have as I understand it leather board (leather dust pressed together with glue) for the heel stiffeners and celastic (plastic impregnated fabric) for the toe stiffener.
Detail finish is absolutely acceptable, especially considering the price level. There is no advanced stuff, but neatly done sole and heel edges and a well balanced shoe. The waist is quite tight cut to be on shoes in this price range who have the sole stitch all the way back to the heel, and this gives a neat and clean impression. 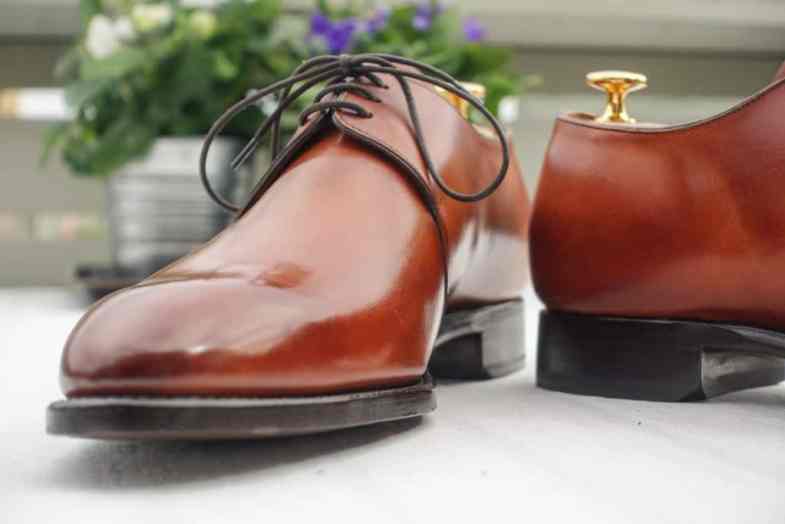 The last with the quite unsexy name Z160 is one of the last Carlos Santos use most in its standard line. It is relatively elegant, slightly elongated, with an almond shaped toe. I have size UK10,5 in this, and it fits nicely around the heel and the instep, and also across the widest part of the foot it fits well. It is slightly smaller in size than many other manufacturers, is my experience. 10.5 tend to be at the somewhat spacious direction for me, here as said they fit good. Since I have relatively broad and shorter feet, I have some air in front of the big toe, but I have feet with far between the heel and the inner ball so the shoes flex point is correct placed, which is what is most important. As many southern European shoes, I think that they are a bit thinner and easier to break in, than say British shoes with a bit thicker and sturdier sole material. 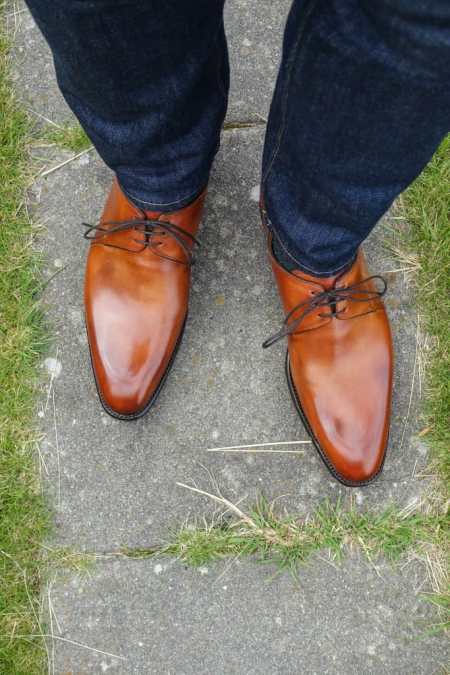 This is how they look on the feet. 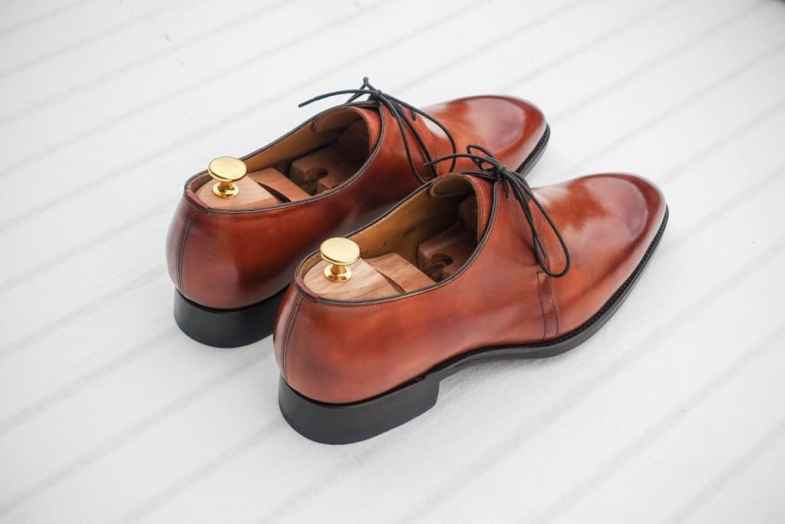 The last is slightly on the small side compared to many others. 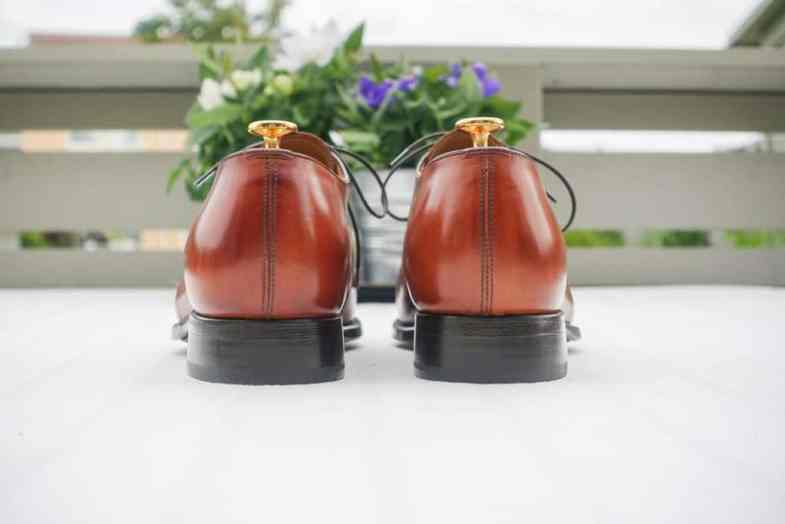 They fit nice and snug around the heels.

If I compare the last with the shoe I use as reference, Loake Aldwych on the Capital last, which I have in UK10 then this is actually slightly, slightly tighter, not least in the heel even though  these are is in UK10,5. It is also a bit longer than the Capital, but it is more logical.

I understand why I have often heard people talk warmly about Carlos Santos shoes. The impression is good, the shoes have a very nice finish of the color and polish to be a shoe for under €400, and materials and construction are at a good level. Portugal is a country with relatively low wages etc., and it is undeniably a lot of shoes you get for the money. 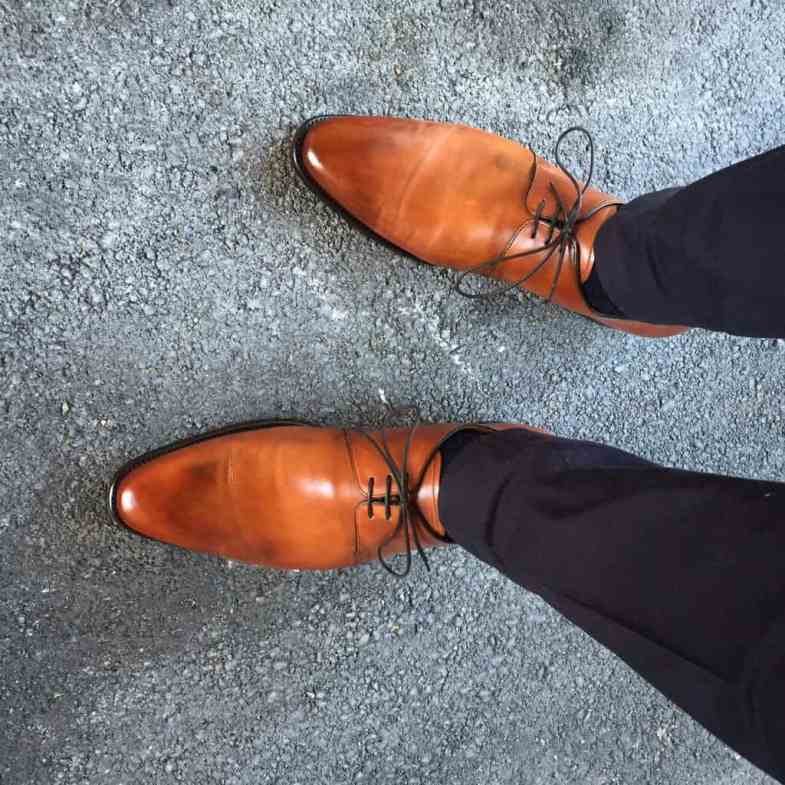 Here’s a pic of how they look after a few wears. 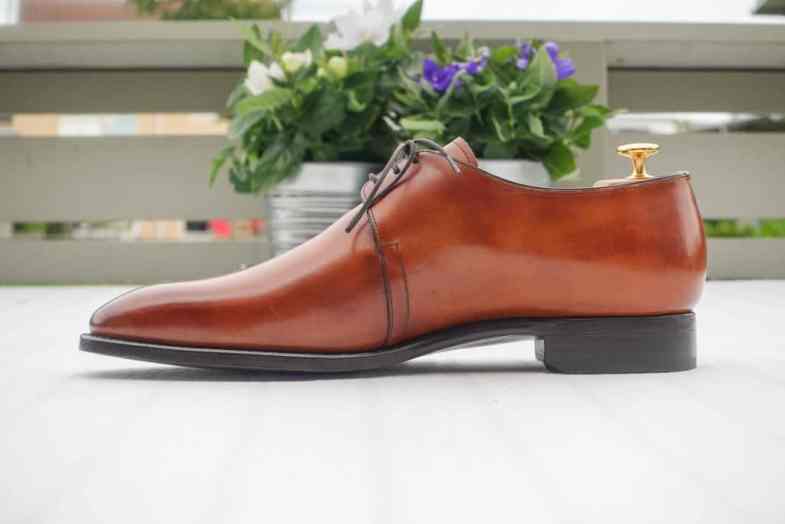 A couple of more pics of them. 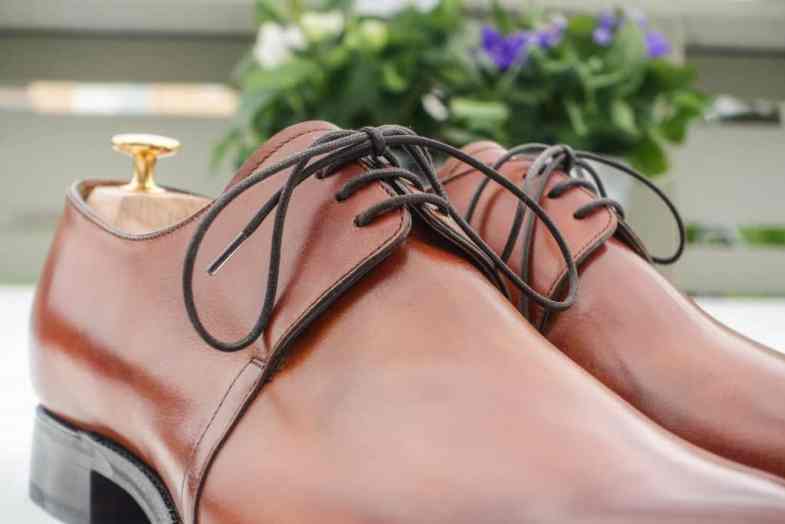 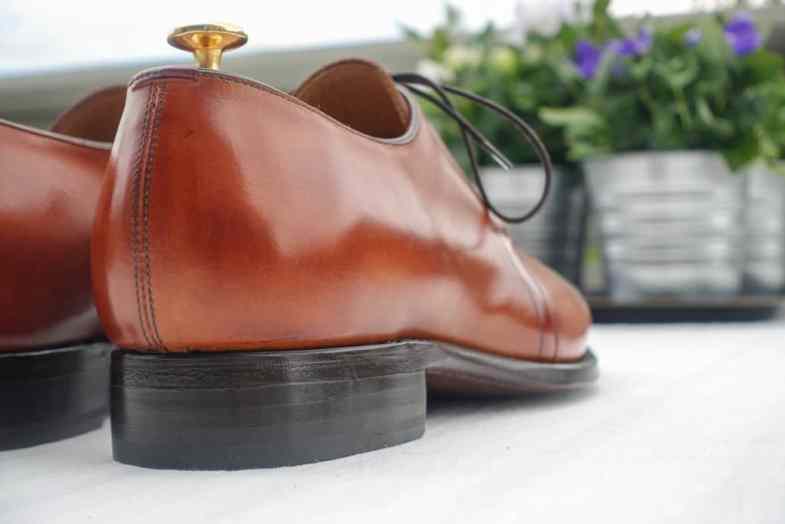