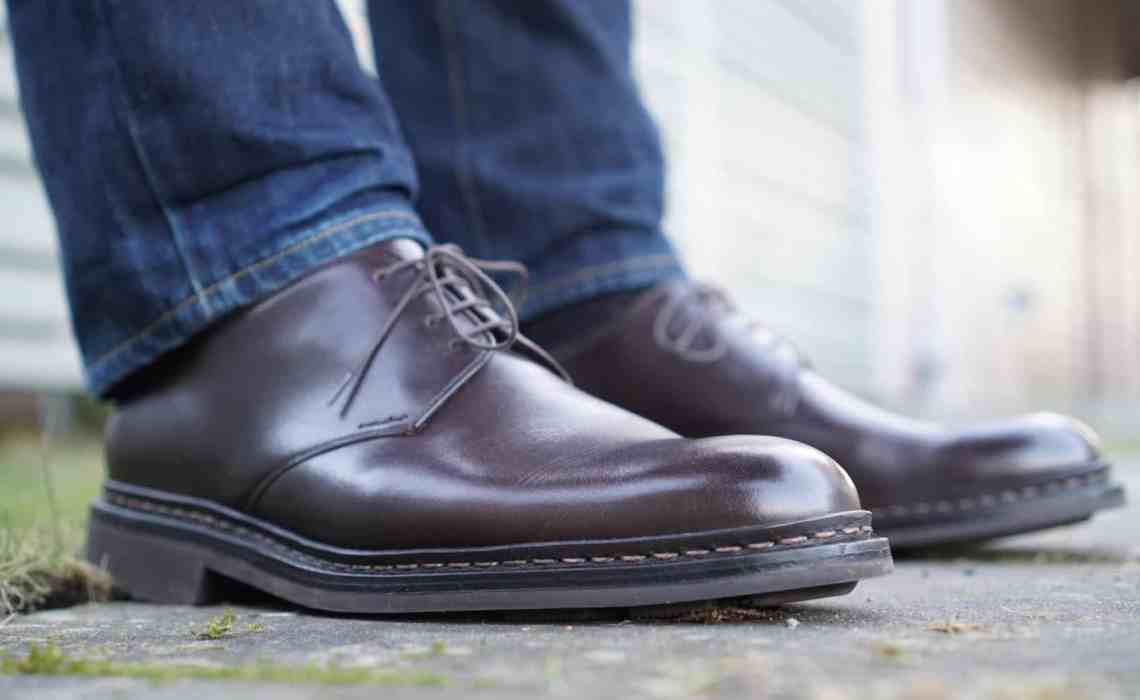 Heschung is one of the classic French brands of quality shoes, with their own distinct style. Here’s a substantial review of the derby Crocus with double rubber soles and a so-called reverse welt. 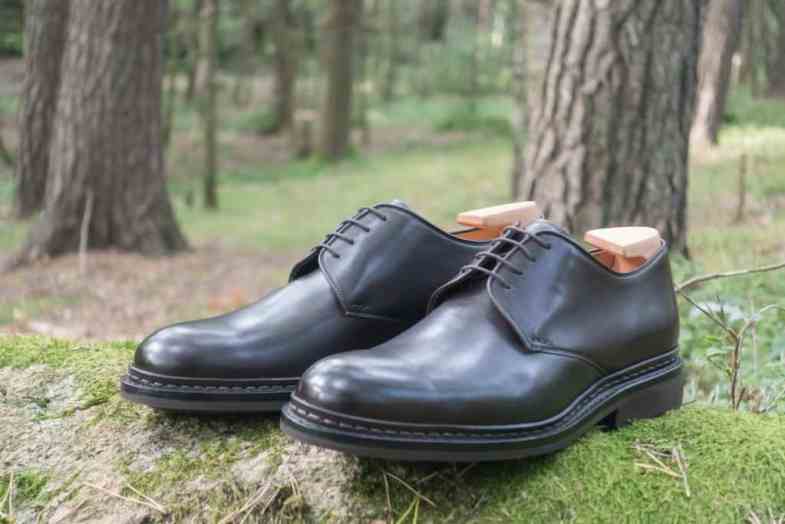 The pair being reviewed.

The brand was founded by Eugene Heschung 1934 in the Alsace region in northeastern France, an area of ​​forests and rivers, where several tanneries has housed and still houses (such as the Hermés linked tannery Haas). Today the third generation of the family is in control of the brand, Pierre Heschung. Ever since its inception, the focus has been on classically designed more sturdy models, initially boots for example, farmers and loggers, ski boots and more, and today it’s the little heavier and more casual models that the brand is associated with, even if they have classic neater models as well. Part of the production takes place in Hungary, but much is still made in the original factory in Alsace, which is nice since the production of quality footwear in France today is relatively small, although there are loads of French brands (most make their shoes in Spain and Portugal ). 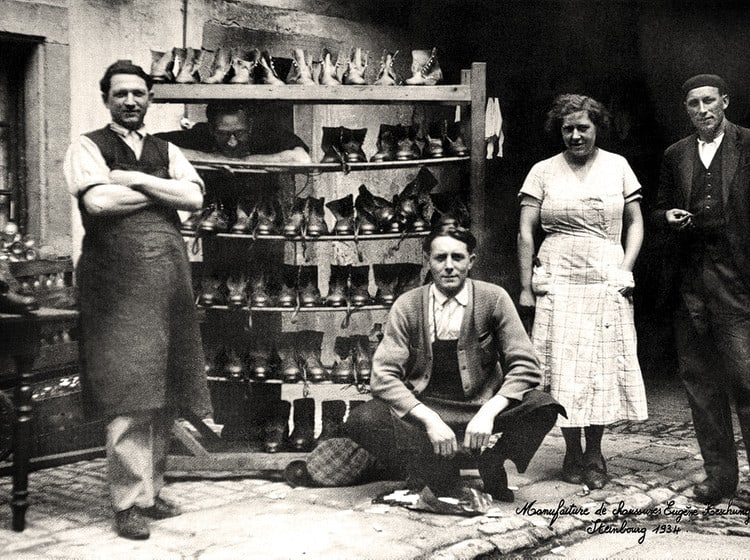 A pic from the newly opened factory in 1934, with Eugene and his wife Madeleine Heschung in the middle. Picture: Heschung

Heschung is just like several other major French brands good at retaining its history and quality level, but at the same time flirt towards a more fashion-oriented clientele and have a design and communication that “ordinary people” appreciate, not only shoe nerds. It’s a bit fascinating to see how for example Heschung, Bowen, John Lobb Paris, Berluti and others in France are all capable of pulling off this balancing act, while other countries’ brands, where the Church’s/Prada combo is a good example (outside Italy that is), have a much harder time to succeed with this.

It’s of course in France where the brand has it’s main market, but they also have distributors in many other places around the world, and several prestigious stores such as United Arrows in Tokyo, Barney’s in New York and Wilkes Bashford in San Francisco sell Heschung. It also has its own online shop where most models are available. 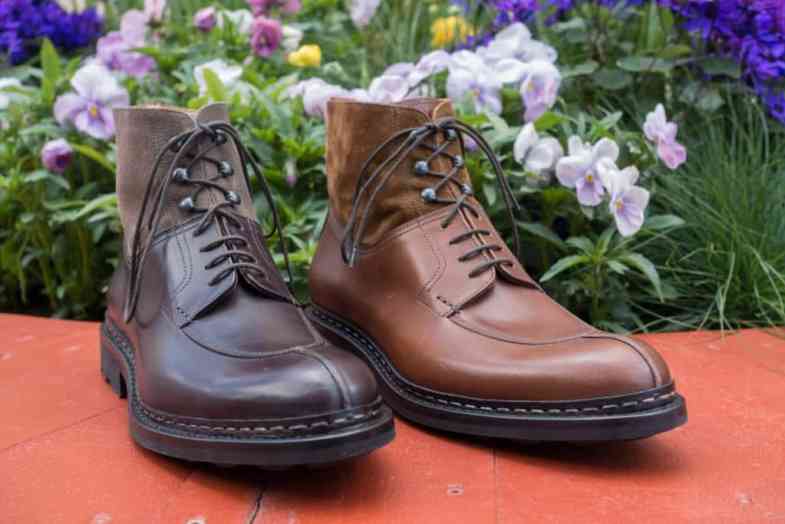 The Ginkgo boot is Heschung’s most iconic model, which almost all retailers have in stock.

Heschung Crocus is a sturdier derby made on the round last Odéon, with a double rubber sole where the sole is Heschung’s own version, which is reminiscent of a Ridgeway sole. It is made with a so-called Reverse welt (more about that below) and all Heschung’s shoes made with aniline dyed, French full grain calf leather. In the box came shoe bags, extra laces and in my case also their own shoe tree that is an almost perfect fit. 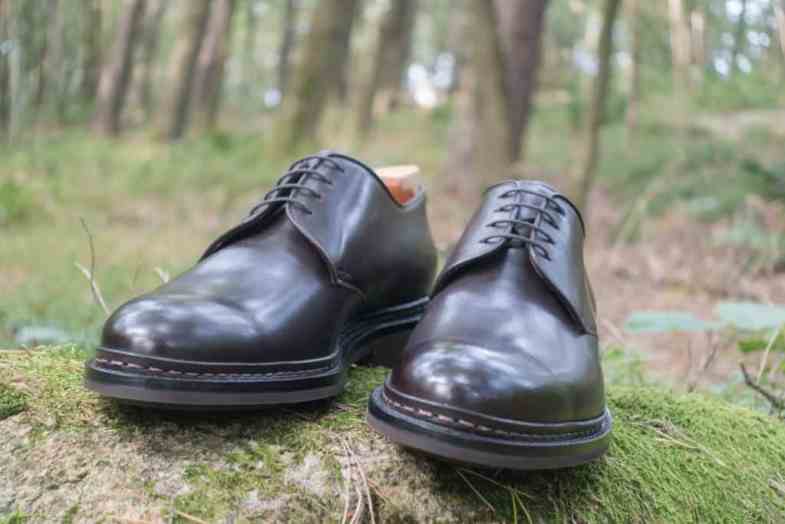 The Anilcalf café shade is a very dark brown color. 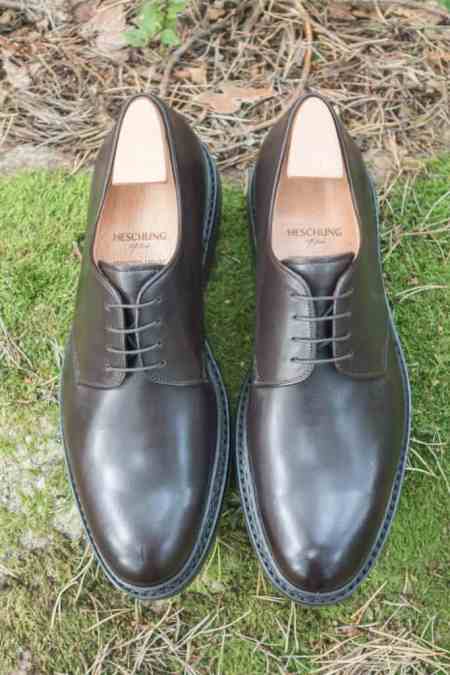 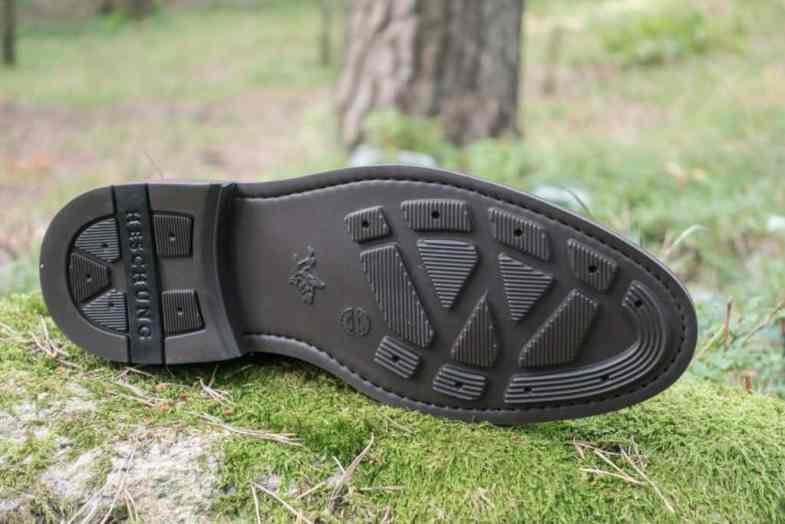 The heavy rubber sole which works well also on snow and ice.

What immediately stands out with shoes is obviously the reverse welt construction, with a  proper leather welt that goes up to along the edge of the upper, a bit like a high storm welt, and then additionally has a seam running along the edge. The difference from a Goodyear welted shoe is that these here you fold the welt outwards, you turn it around, revers it, and sew what corresponds to the welt seam so it becomes visible from the outside instead of hidden under the inside of the shoe. The seam still performs the same function as a welt stitch, namely holding together the welt, the upper and the insole, but it’s made on the side of the shoe instead of the inside. The picture below explains it a bit further:

There is a bit of a jungle what the difference is between Reverse welt, Norweigan, Norweigan welted, Norvegese, Goyser and so on, different manufacturers sometimes call the same thing different names, but generally all of the above are built on the same principle where the major difference is if you use a welt or fold out the upper leather.
One advantage of the reverse welt, and likely the reason why Heschung choose it on their sturdier models (they also make shoes with Goodyear welt and lighter versions with blake construction) is that you get less material to be jammed together under the shoe at the edge, allowing you to make a double soled shoe that will be a bit more flexible and softer than a welted one. 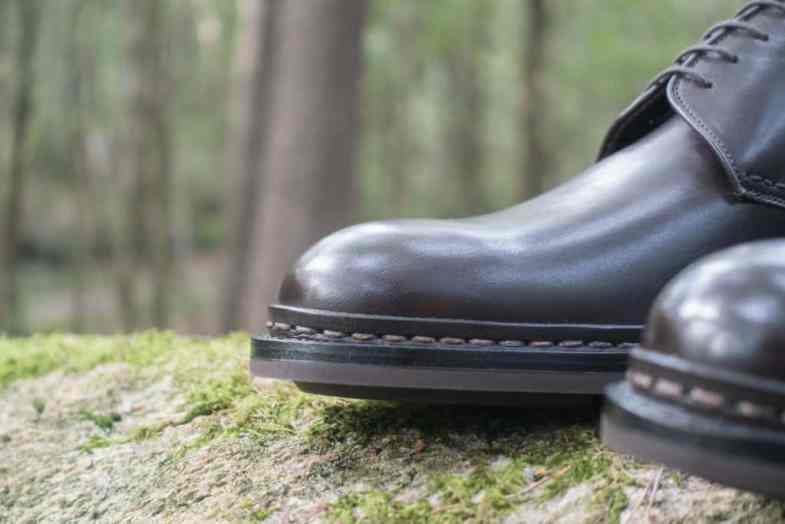 Close-up of the reverse welt, where you also can see how the leather fibres goes along the shoe if you look closely. 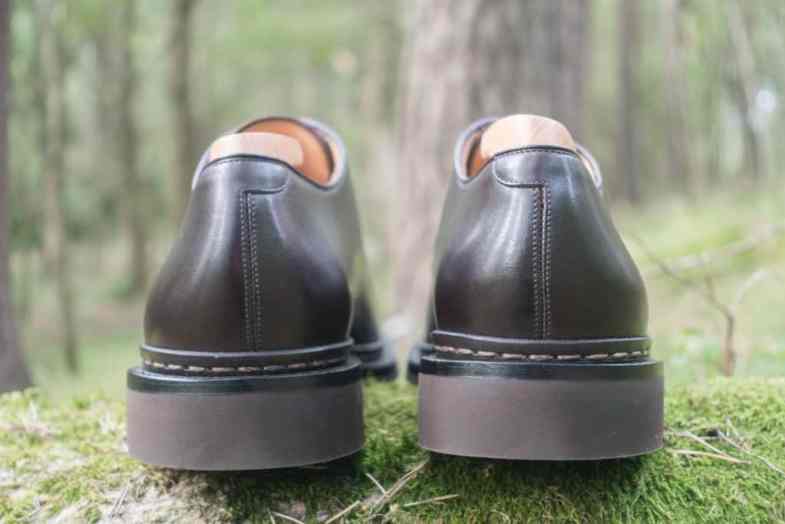 The heel is made in the same piece of rubber as the sole, a bit like an EVA sole, which has its pros and cons. 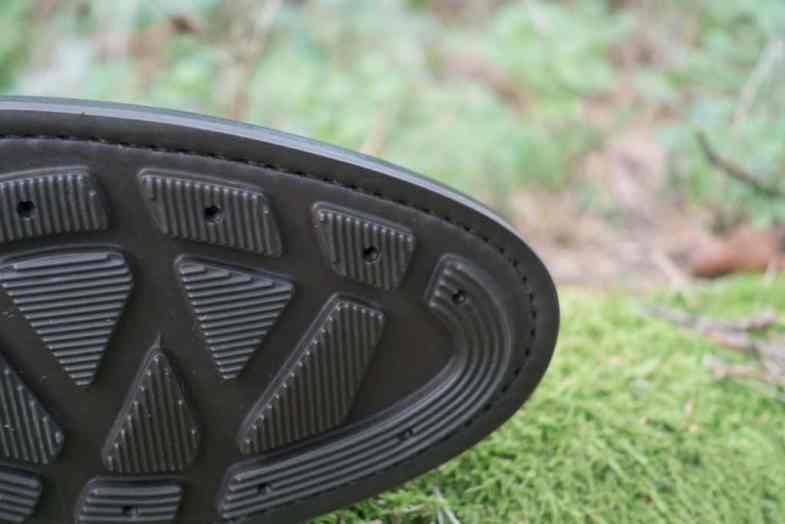 Close-up of the sole.

The aniline coloured leather is from the local tannery Haas mentioned above (about 70% of Heschung’s leather used is from them) is less processed than many other calf leather which gives it a bit more rustic feel that fits well with this type of shoe. On my pair it has fibers that goes a bit along the shoes, which look a little different. After the 5-10 times that I used the shoes they seem to crease normally.
The shoes are solidly built, although it is not exactly a lot of finesse, but it’s probably not quite what you’re looking for if you buy one of these models anyway.
Heschung’s own rubber sole provides good grip even when wet, snowy or icy. The color of it quickly became little pale however, like pale gray-brown or something, and since it’s so thick it affects the look a bit, I think.

Given the thick double rubber sole I was prepared for a really tough shoe that would require many hours before were worn in properly. I was therefore thoroughly surprised when I slipped into the shoes and the they felt very soft and comfortable right from the start. Reverse welt construction and the advantage mentioned above with that certainly play a part, but Heschung likely also have chosen material for both the insole, midsole and rubber outsole which is relatively soft and provides instant good comfort. 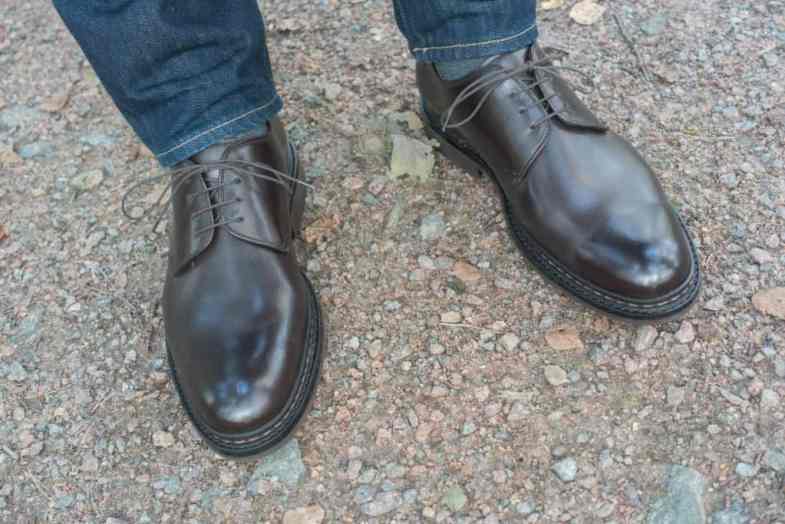 Even if it’s a sturdy shoe they are instantly soft and comfortable.

The Odéon last is slightly large in size. I have UK10 in standard width in these and normally I nowadays often wear UK10,5. They fit well with the exception of my hallux valgus issue on the right inner ball of the foot, which creates problems for me in many RTW lasts. I also have an outside ankle bun which is a bit low, and here it goes against the upper a bit, something which also happens for me with shoes from, among others, Gaziano & Girling. Not something most will have problems with, but if you know that you have a little lower ankle buns might be worth try on the shoes before purchase.
Compared to the reference last Loake Capital Odéon is a bit smaller overall, but still a cut above some sort of True to Size last.

Heschung is a brand with its own identity that makes solid shoes. Their sturdier models like the Crocus reviewed or their iconic boot Gingko and others is something that those who like this type of shoes but think that they often are heavy and uncomfortable should look closer at since the comfort is surprisingly good from the start. 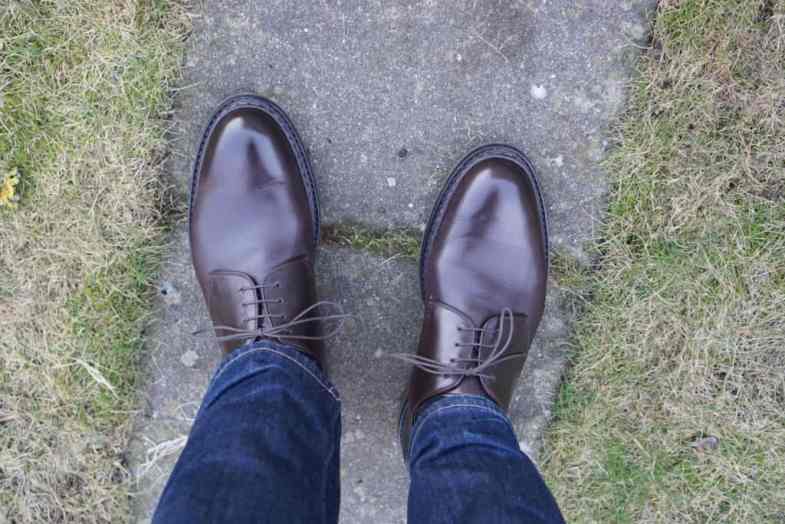 Here’s how the shoes look after a few times of wear. 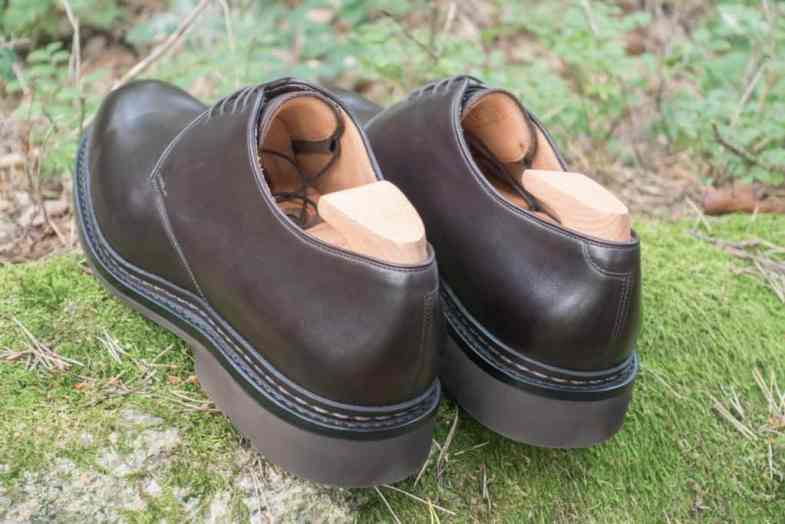 And some more pics. 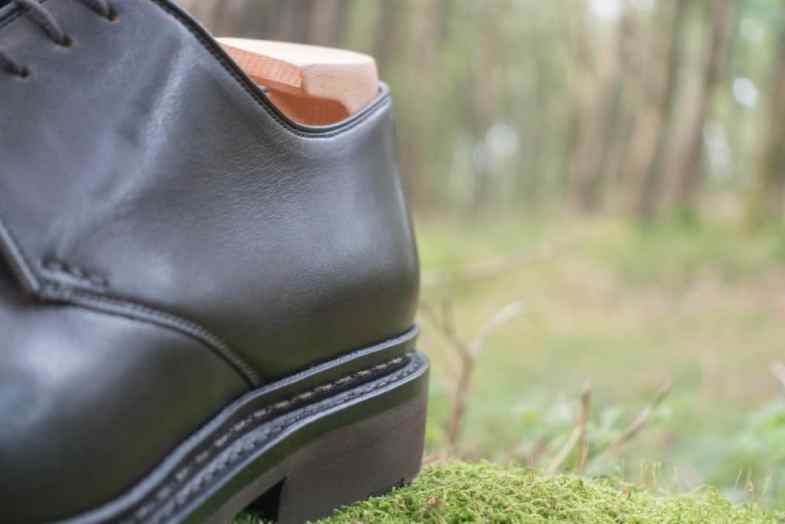