Reflection – Is biofabricated leather the future? 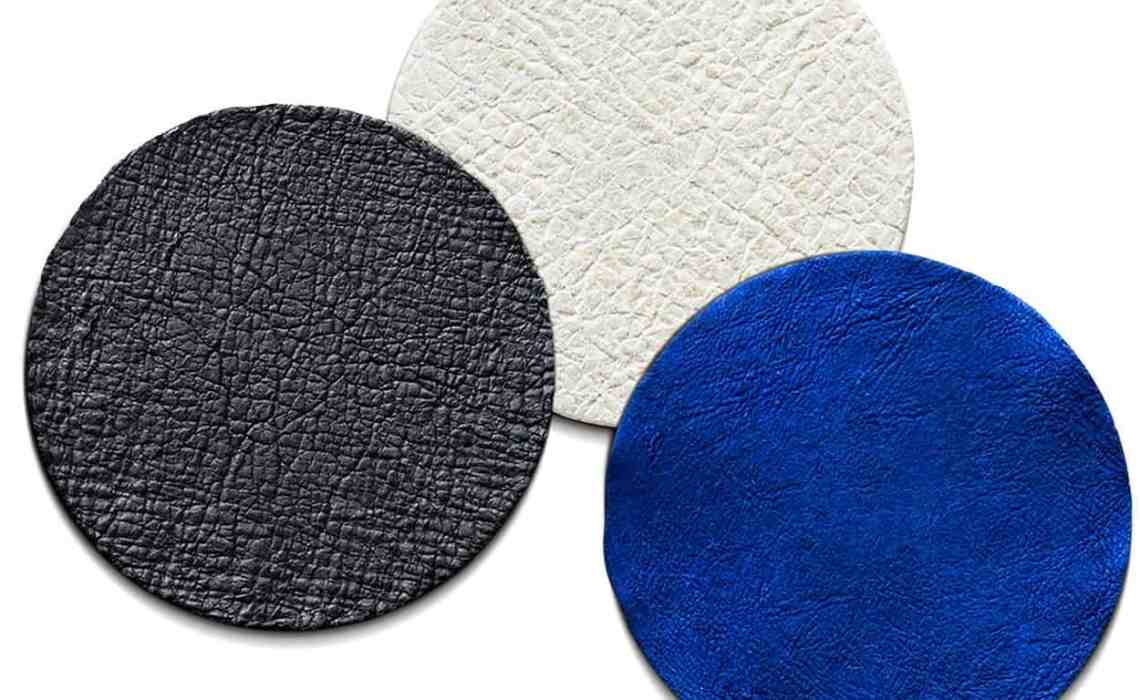 Imagine that the raw material for your future leather shoes is not from animals, but grown in large laboratories. Already next year biochemically produced leather is released on the market, and at least in theory there are many advantages. Is biofabricated leather the future?

It’s a bit like Jurassic Park, but instead of producing dinosaurs, it’s skin you’re producing. Different variants of these techniques have been tried in scientific contexts earlier, including for example meat fabrication, and there is an attempt to produce leather-like material from mushroom protein and the textile/leather substitue Pinatex made from ananas leaf fibres is already used by some brands. Now it has come so far on the leather side that the first commercial products soon are on the market.

Using biotechnology, you can produce leather by growing cells. One creates sheets of collagen, the protein found in leather, and have it grow with a form of yeast. To describe it more in-depth, you take DNA, modify it for the desired purpose, place the DNA in cells to which you add nutrients and grow it into leather fibers, which can then be assembled into sheets of leather. The sheet is then tanned in a similar way to animal skins and the end product is a natural leather, made of natural building blocks, but prodcued in a laboratory. 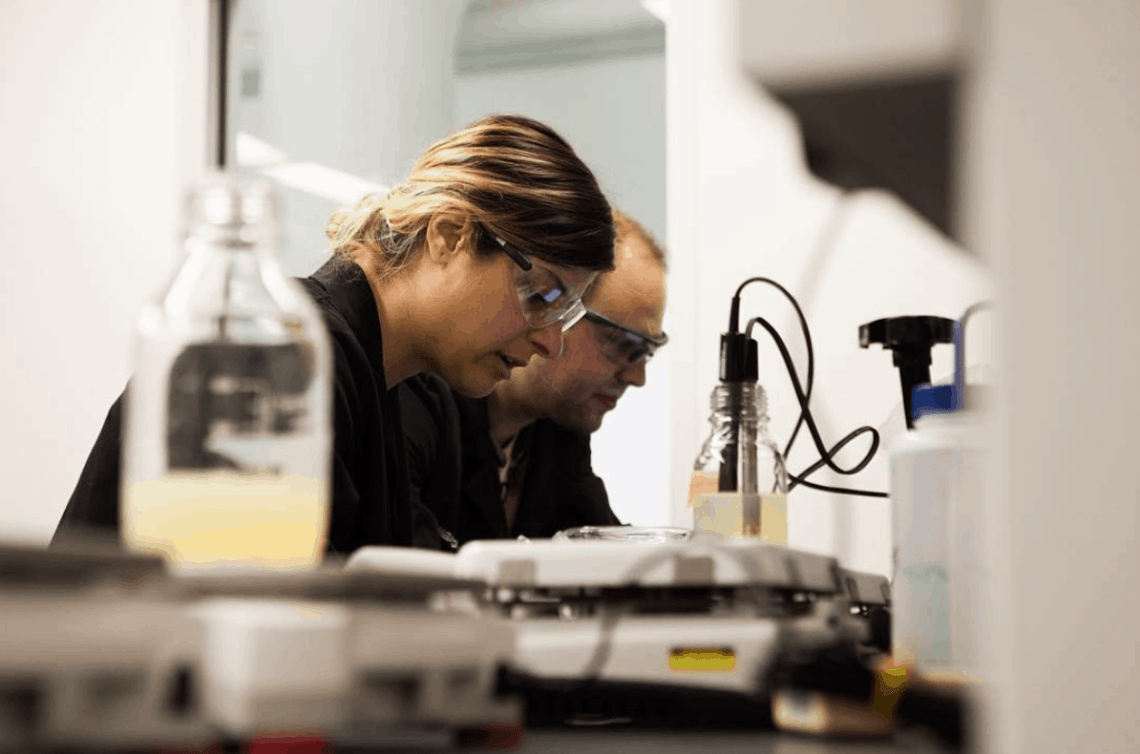 In the laboratory of Modern Meadow.

Leading this field is an American company called Modern Meadow, which presented its biofabricated leather earlier this year. The name of the leather is Zoa. Modern Meadow has been working on biotechnological production for several years (they were, among other things, early on biogrown meat, a falang now put to rest, for logical reasons it is harder to work with something that we will put in our mouths than on our bodies). Behind the company is Andras Forgacs and his father, Gabor Forgacs, who previously operated a company that made artificially manufactured human tissue, which can be used for example in cases of burns. With Modern Meadow, they went over to animal tissue, and next year their leather is available on the market (although it takes a while before a larger scale of productions is up and running).

The benefits of biofabricated leather should be many. Purely functional, you are no longer limited to the skin size of the animals, but can produce sheets in just the format you want. You can also give it the qualities you want, thick and strong, or soft and flexible, even different qualities on different parts of the leather. Imagine that you have a harder, more durable leather type on the toe and heel, while over the vamp where it bends it’ss flexible and pliable. All the flaws that come from the animals’ life, which makes a lot of leather graded down, are now gone. All “hides” of biochemically made leather are perfect, in theory anyway. Initially, it is only artificially produced cow and calf leather that Modern Meadows works with, but they will also produce different varieties of exotic leather in the future. The price picture for this leather is apparently comparable to normal leather, while exotic hides can be significantly cheaper than its corresponding all-natural variant. 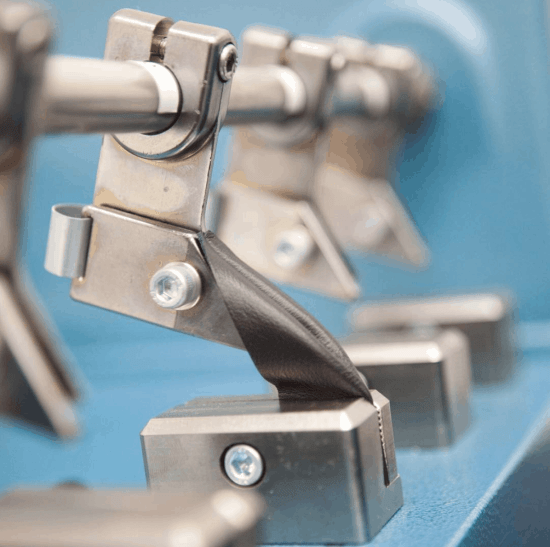 Another advantage that is highlighted is of course that living animals are no longer needed. Now, as I hope you already know, leather is a residual product from meat production, but since we may need to eat less meat in the future, due to environmental considerations for example, the availability of leather would not be affected to the same extent by using biochemically produced leather. Already today, the availability of good leather is a major shortcoming that many manufacturers of quality shoes are struggling with. That the function of this artificial leather in terms of breathability and biodegradability is similar to that of normal leather is also an advantage compared to, for example, what today is often presented as vegan leather, which is just another name of synthetic leather that is basically exclusively made of plastic, with all the flaws this implies. In the tanning of the biofabricated leather, less potentially harmful tanning substances are also required, as the skins are clean without much of what is removed from the animal skin in the tanning process. 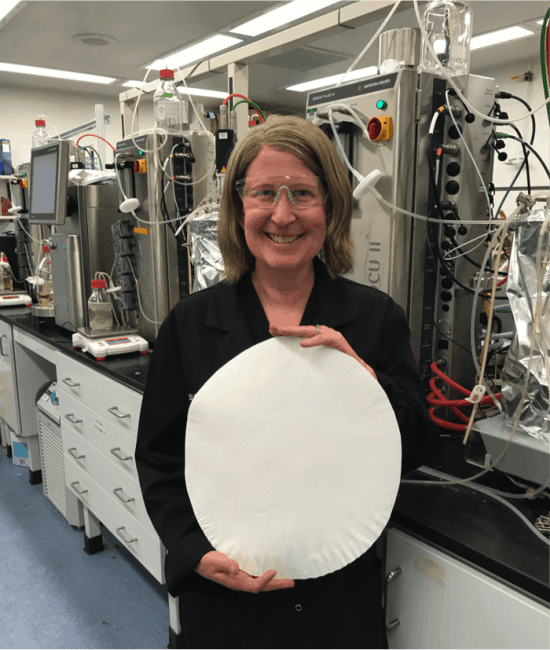 A bit of farmed skin, before tanning and finishing. Photos: Modern Meadow

Are there any disadvantages then, you may ask yourself? One big question is obviously how good quality the grown leather will have in reality, how well it will hold up, how it will be to work with, and so on. Even though the producer claims it’s going to be amazing, it needs to be tested in reality before we know that’s really the case. Then, of course, another question is how we consumers view it all? In the world of classic quality shoes we are often attracted by traditional crafts, history, and so on. How do we see it if you were to suddenly stop using the material that for thousands of years has been the main option for good shoes, skins from animals, and start using artificially made leather? Although it would potentially be better shoes, is it the same?

The future may show how the biofabricated leather is perceived and works, but in my eyes it is definitely an interesting product that I will follow closely. Perhaps in a few decades we will shake our heads to people who are so old fashioned that they use animal skins on their feet. “Fuddy duddy”, we’ll think. Remember where you read it first…

Below a movie about the Zoa leather: