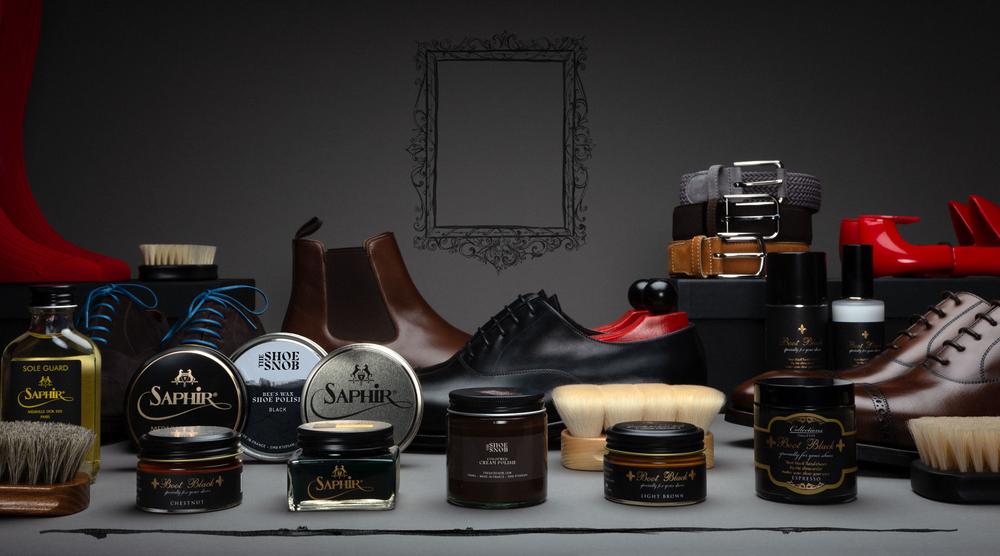 The amount of good quality shoe care brands available are more than in a long time, and a lot of them are more accessible than ever with the growing e-commerce. Here’s a summary of all the brands you need to know off and info on where you can purchase them.

When the Japanese do something, they often do it properly. Also the case when it comes to shoe care products, where Boot Black from Matsudo, Tokyo, is one of the most progressive shoe care companies today. The premium brand of the main Japanese player in this industry, Columbus. They have a large development department and have an impressive range of products part of the Boot Black range, from regular shoe cream and wax polish to sole edge crayons (to cover minor marks) and an oil-based polish that allows for a high shine all over the shoe. Their products often smell quite strong, but are easy to work with and gives excellent results. Has a growing retailer base around the world, in Europe you can for example find them at The Shoe Snob, and in the US Leffot is one of the retailers.
Here’s a review of some Boot Black products. 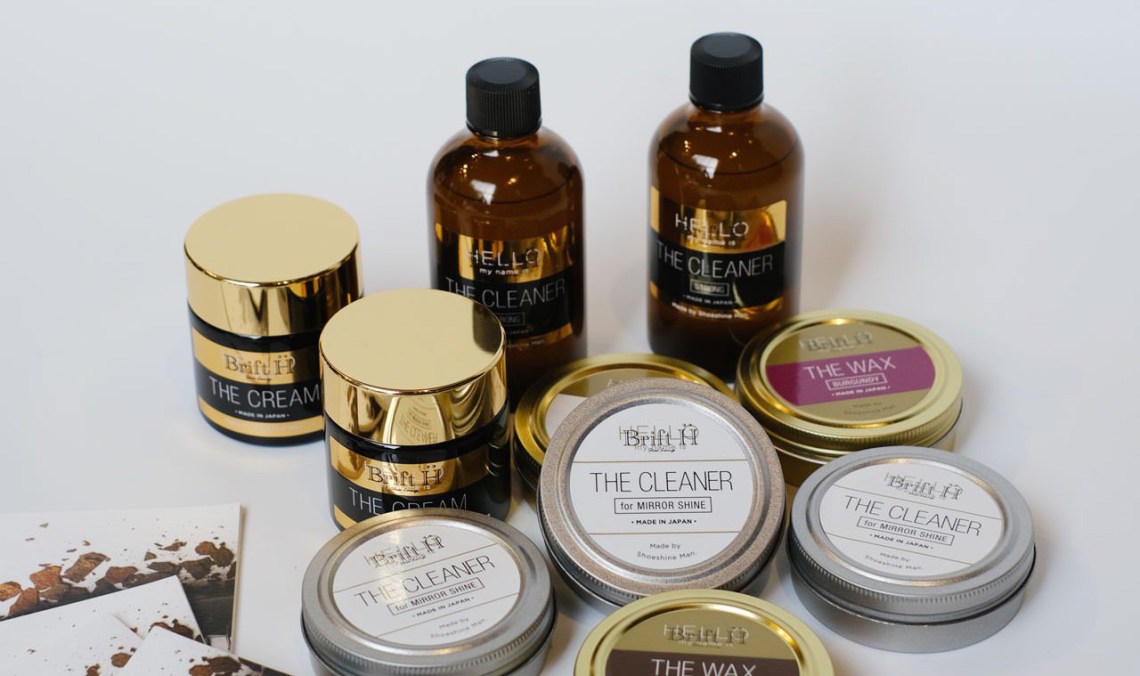 The brand Brift-H was started by the first world champion in shoe shining, Yuya Hasegawa from Japan, with the same name as their shoe shine bars. Small range of creams, waxes, brushes etc. The products are relatively loose in consistency, similar to Collonil below, but are nice and easy to work with. Has its own webshop that ship worldwide.

Here it’s important to know that today’s Burgol is not the original products. Hesitated a bit about if to include this at all, but think it’s good to be open about the story here. To summarise, the original Swiss Burgol had the rights to the company name basically stolen by their German agent (read more in this article), who now produce Burgol products in France and not the same standard as was, although still quite good. The original Swiss company has now rebranded to Siegol (see below). The new Burgol is mainly found in Germany nowadays, but also sells internationally. 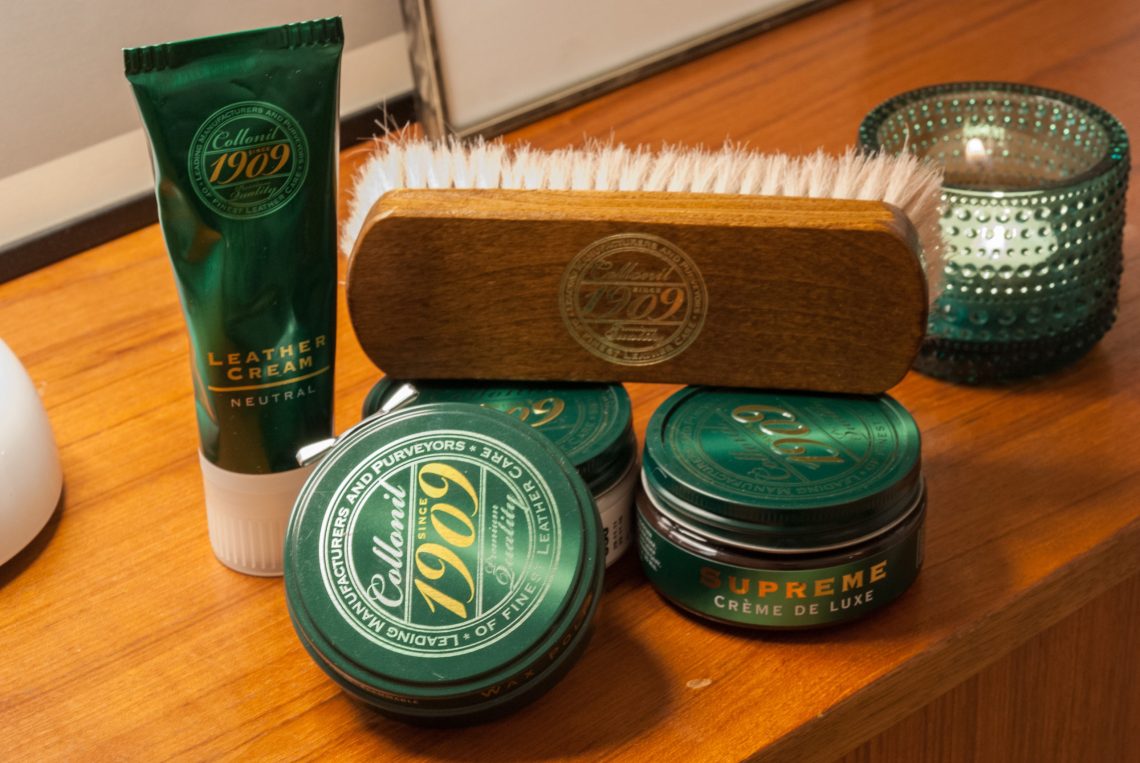 Collonil is one of the largest producers of quality shoe care in Europe. Has several different ranges, where the standard series is stable with good products without silicones, and where most things are available. They also have a top range with only natural ingredients called 1909, it’s really good and at an affordably price tag in general. The cream contains a lot of pigment and is rather soft in consistency, and the wax is relatively easy to work with. Their own webshop sells their entire range and ships worldwide. 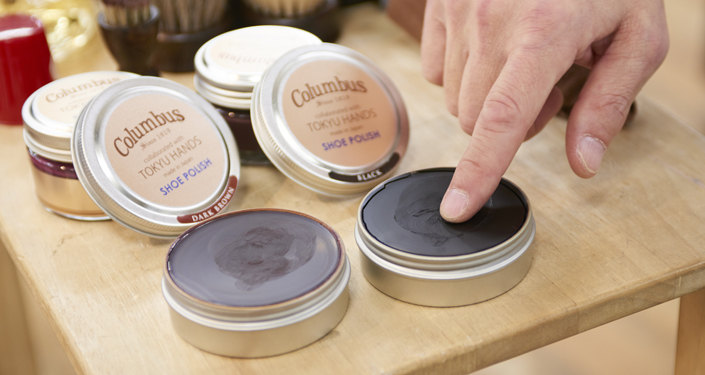 Columbus is the company behind Boot Black, but they also have a bunch of slightly simpler products under their own name. The biggest shoe care company in Japan, and literally has everything you can think of and more. Can mainly be found in their home market, but also in some other places in Asia.

French shoe care manufacturer Famaco has been around since 1931, and mainly makes products for shoe brands, stores and others who want to have their own logo on stuff, so it’s a mix what is made. Under their own brand they gather mainly their best products with an exclusive touch. They have lots of shades especially of their shoe cream, more than 100 different colours (!), and it’s definitely nice and easy to use. The main online retailer is Monsieur Chaussure.

Kiwi is a player aimed more at the common man than shoe enthusiasts, and so the focus is on cheap, easy-to-use products which unfortunately means some synthetic chemicals in many cases. It gets clean quickly, shiny quickly and so on at a low price, but is in some cases questionable for the leather. Their wax polish Parade Gloss is one of their finer products, which is clearly easy to get up a nice shine with. One of the reasons, however, is that it contains silicone (on some markets, that is, it actually varies), which can clog the pores in the leather and limit its ability to breathe and thus age well, at least if overused. Should be rather easily accessible in most areas of the world.

Picture: A Fine Pair of Shoes

An old French company, which since many years are part of the French Avel family, La Cordonnerie Anglais’ products are made in the same factories as its sibling Saphir. Has the basic stuff like cream, wax, leather cleaners and more, but is also big on other parts like brushes, cases, aprons and so on. Available from for example Valmour. 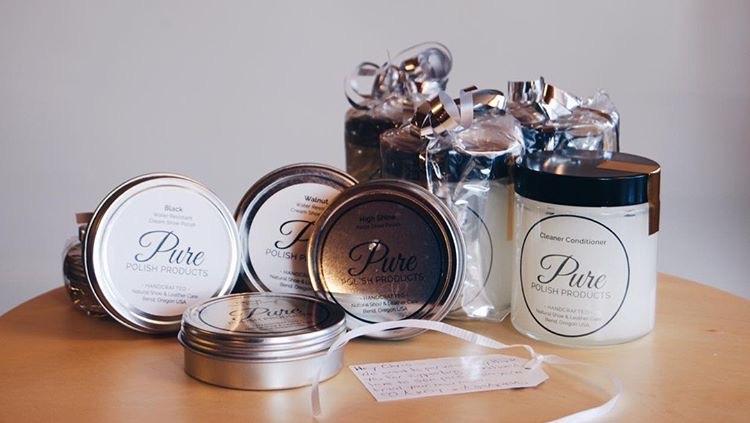 Founded about a decade ago under the name GlenKaren by the couple Glen and Karen Tippets in Oregon, USA, now taken over by enthusiast Andy Vaughn and renamed to Pure Polish. Karen had disliked the strong scent of turpentine (a type of solvent used in the vast majority of shoe care products. Contrary to popular belief, turpentine isn’t a synthetic substance, but an oil extracted from pine trees, it smells strong though), and that’s where the idea for the Pure Polish shoe care range was born. It’s made with all-organic products and instead of turpentine they smell of orange, a much more pleasant scent according to most. The products can be a bit hard and slightly demanding to work with, but the results are excellent, not least the wax gives a good shine quickly and their water-repellent cream works rather well. 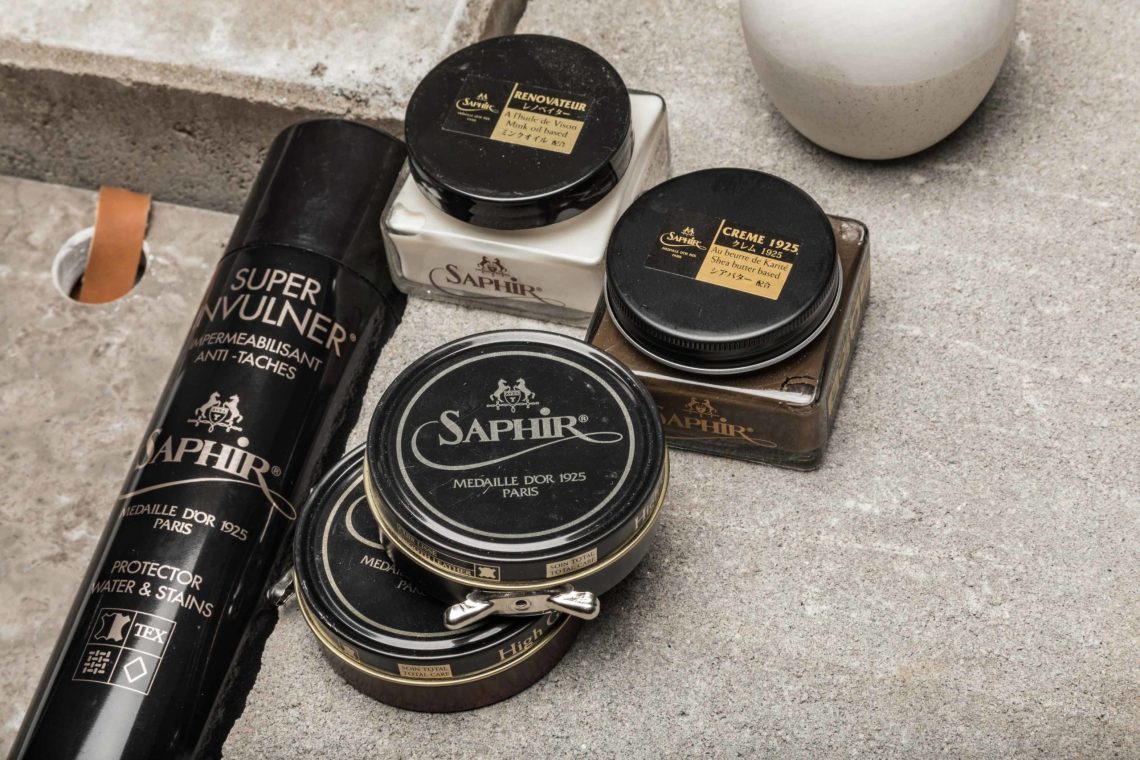 Saphir is the biggest shoe care brand for those who are more into shoes, and sold in lots of places: shoe stores, cobblers, online stores and so on. As mentioned above part of the large player Avel. Saphir has two ranges, with the standard range using synthetic dyes with lots of colours, and lots of different types of products part of it. The top range Medaille d’Or has excellent shoe cream and wax polishes using only organic pigments, and their sprays has no silicones or other synthetic substances. Very wide range of products, available at retailers worldwide.
Read more about Saphir in this report from a visit to their factory.

Shoeboy’s is a German brand that despite being around for a long time never really established itself wider, outside its home country. However, they also have a wide range of most within shoe care and accessories, except that they seem to lack a wax polish. Available from some cobblers and others, but then usually only a few individual products, the whole range is most easily found on Ebay. 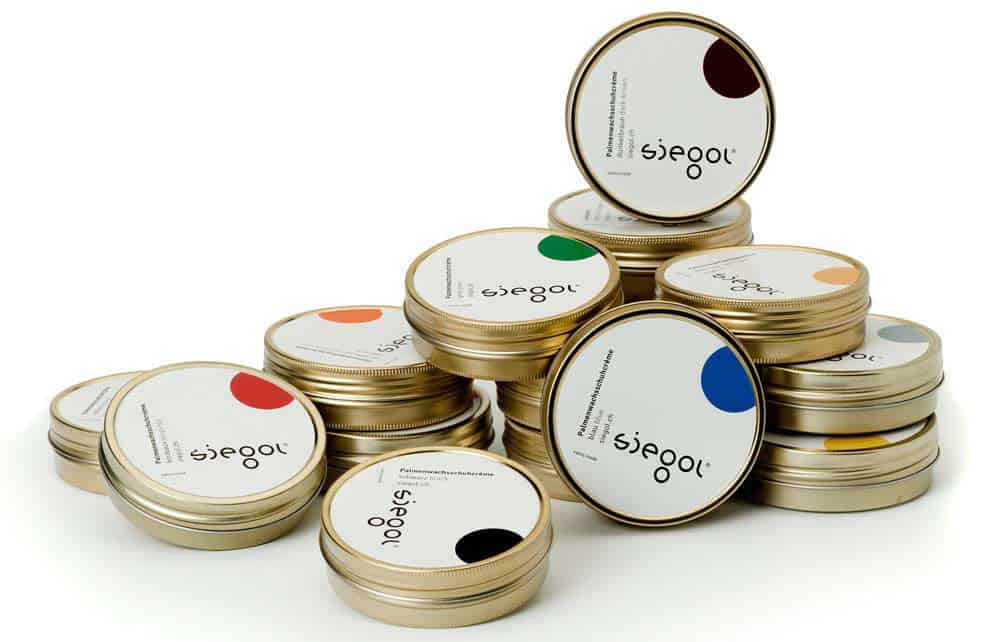 Siegol from Switzerland (previously Burgol, read more above) makes really nice products. Both cream and wax are thick and long lasting. Some manufacturers who use crust leather (leather that is only dyed on the surface) recommend Siegol (and also Collonil 1909 or Saphir’s standard range) over many other brands, as their cream contains less wax which tends to gather in light streaks in the creases of crust leather shoes. Can be bought from their own store, and some selected retailers.

Another of the big names in shoe care is the Spanish brand Tarrago. Has lots of different ranges with everything from creams and waxes to protective sprays with so-called nanotechnology and leather dyes. Has a good reputation and is very popular in some countries. Sold in various places on most markets. 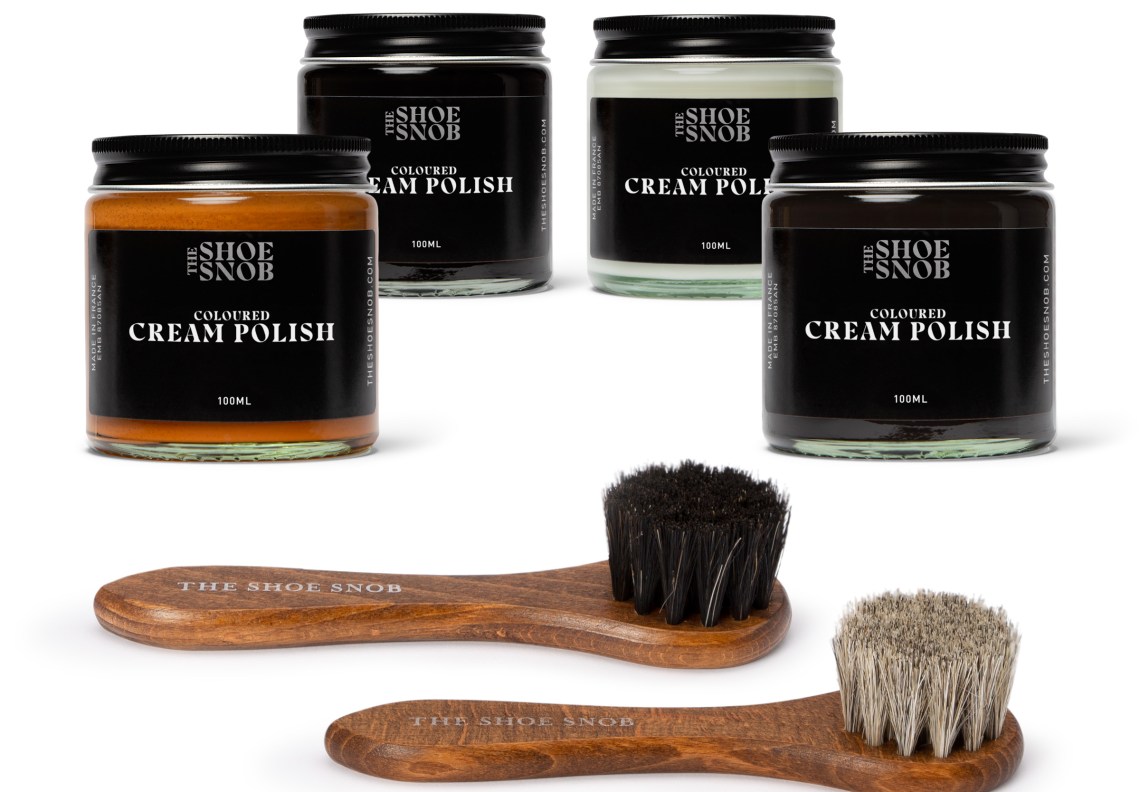 Started by the blogger and shoe entrepreneur Justin FitzPatrick, now with new ownership, The Shoe Snob has the more basic products in its range. They’re made by Avel and are very reminiscent of La Cordonnerie Anglais’ products, with the wax in particular being nice and easy to work with. Buy from The Shoe Snob’s own online shop.

Turms is a fairly small company based in the Italian shoe district Marche. Used to be big on wooden lasts for various shoe manufacturers, but nowadays the focus is on shoe care and shoe accessories. Not a huge range of products, but what they have is really good and nicely packaged. A favourite is a leather soap that includes a natural sponge from the Adriatic Sea off the coast of Marche as the finishing touch. Nowadays they have a good online shop of their own.

Now please note that this is just a selection of shoe care producers. There are, of course, many more, but I cannot include them all, for example brands focusing on specialised sneaker care I have left out, and those who are only big in one market. If there are any that you like very much that are not on the list, please write about them in the comments section, where you are also welcome to share your experiences of those on the list.

Here you can read about why there’s no problems to mix between shoe care brands.