In-depth – Creases on the toe cap It’s one of the most common misconceptions in the world of quality footwear: that creases on the toe cap means something is wrong. That the shoes doesn’t fit, or are badly made, or other various explanations. In reality, it’s most likely nothing that’s wrong at all, just perfectly normal. Here I explain more.

We’ll start with looking at the shoe parts being involved here. First, basically all types of classic footwear have a toe stiffener, which covers the toe box, placed between the upper leather and lining leather. It’s essential for the shape of the shoes and their appearance, it’s also important for protecting the feet. The way the stiffeners are done varies. On almost all factory-made Goodyear welted shoes one uses celastic toe stiffeners, which is sheets of plastic impregnated textile, which in conjunction with the lasting of the toes are heat formed to the shape of the lasts. It’s an easy and relatively cheap way to make toe puffs, with relatively good results. In handmade welted shoes, like for example basically all bespoke shoes, one make the toe stiffeners of real leather. If done properly from the beginning, rather thick leather pieces are thinned down and skived thinner towards the edges, attached to the shoes by hand along with starch based paste, which makes the toe puff harden when dried. Pros with real leather toe puffs vs celastic is that one can enhance the shape of the toe further with leather ones by sanding etc, and especially that they can be reshaped, for example in the event of a bad fit or if an accident has happened with the toe being stepped on or similar. But it’s to a much less extent than the difference the material does for the heel stiffeners, since toe stiffeners aren’t in contact with the foot in the same way at all. 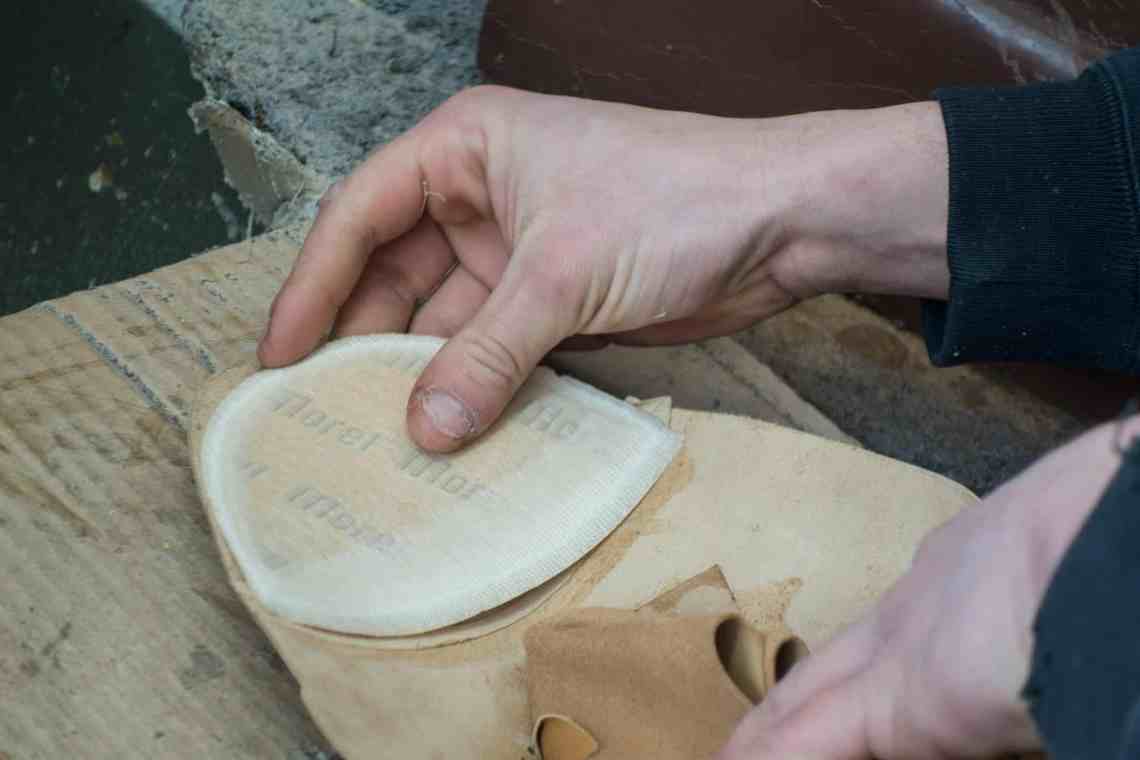 Toe stiffener in celastic is glued into place, and will then be heat formed onto the last. 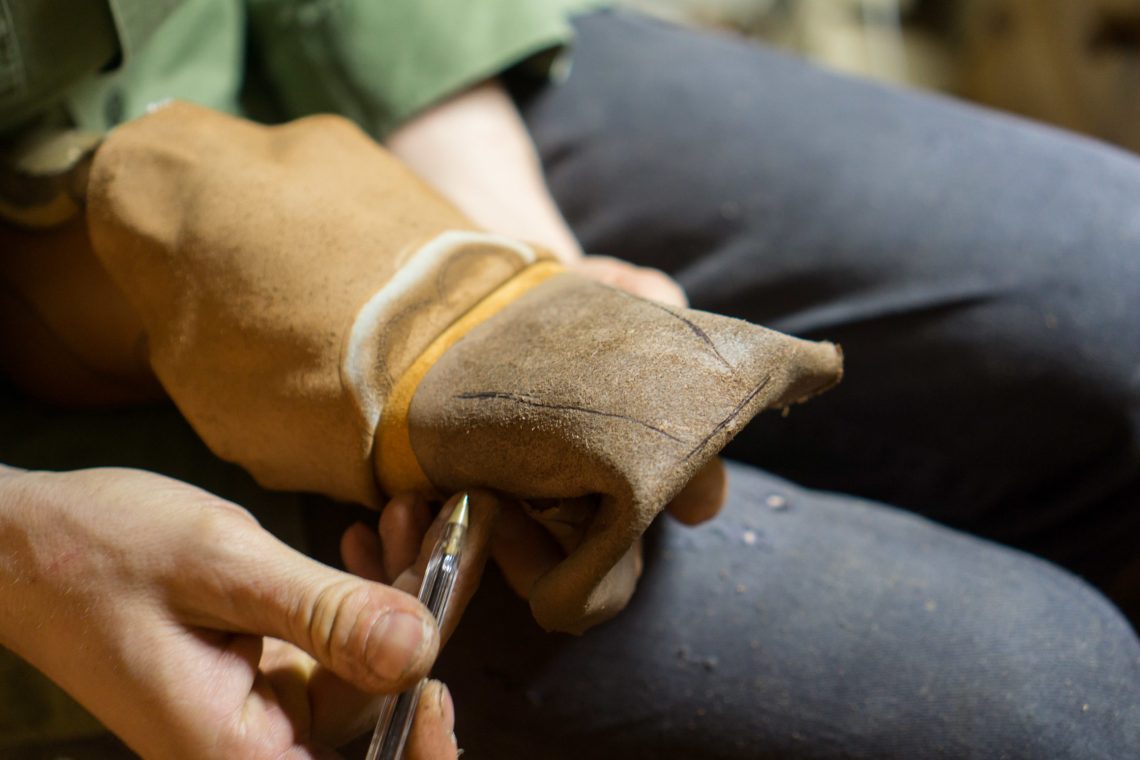 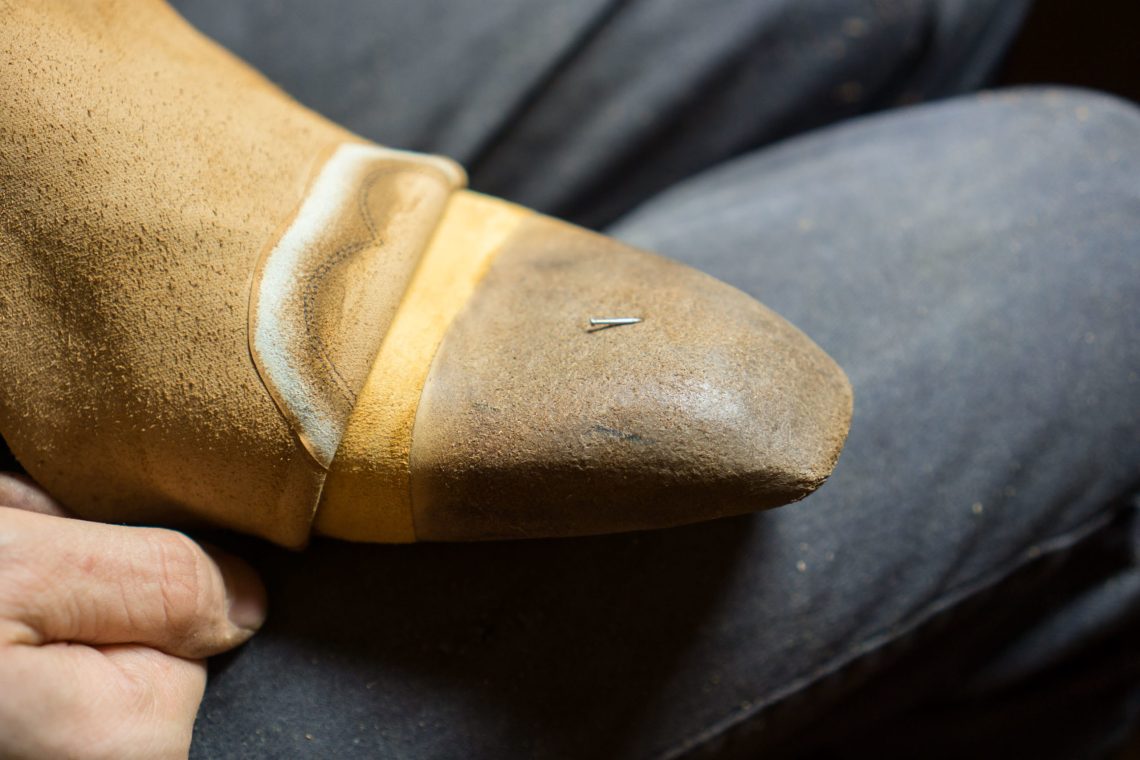 Okay, so there we have the stiffeners. And then, next part of this topic is the toe cap. It’s basically a part of the upper pattern, where you have a separate leather piece over the toe box, nothing new to most reading here. In rare cases the vamp continues all the way forward in the toe and the cap is placed on top of it, so the upper leather has two layers at the toe (plus then the stiffener and the lining leather), but in almost all cases the vamp and cap toe only overlap each other with 1-1,5 cm or so, with each piece skived to make the transition as smooth as possible, although the upper is always a bit thicker in a small area where two parts are attached. 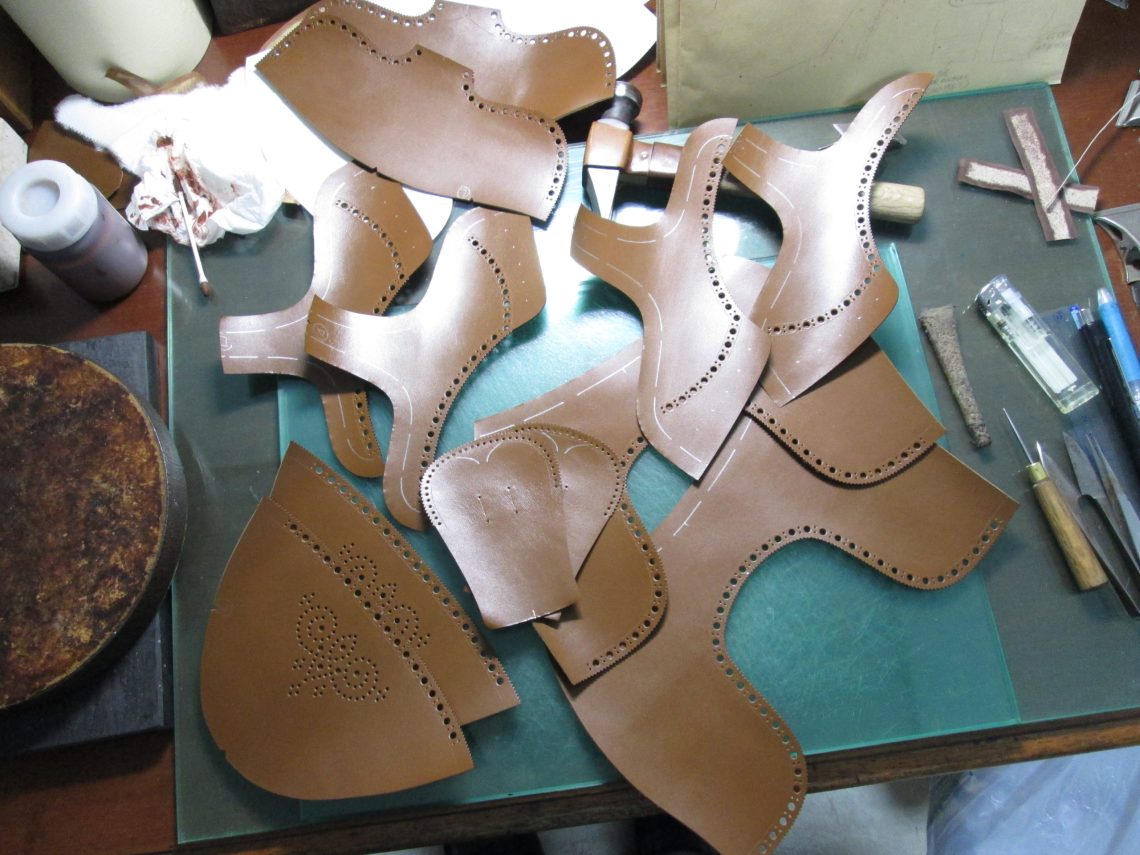 Pieces for an upper of a semi brogue oxford cut out. You can see the brogued toe caps with medallions in the bottom left corner.

Ok, so, we have toe stiffeners and toe caps. Two different things. And the shoe manufacturer generally treats them as two different things. Some use toe puffs that more or less align with the toe cap (usually the stiffener ends just before the toe cap in these cases), some have a longer toe stiffener than the toe cap, some have a shorter stiffener than the toe cap. All comes down to traditions in how one makes the shoes and how one makes the patterns. There’s a rule stating how a toe puff can’t be too long to create discomfort when the shoe bends, but apart from that they can vary vastly without anything being right or wrong. And when it comes to the cap toe, it’s all aesthetics. There’s some rules used by some of how much of the total length of the shoe that should be of the cap etc, but how things are done is mainly just traditions or styling, and varies a lot. 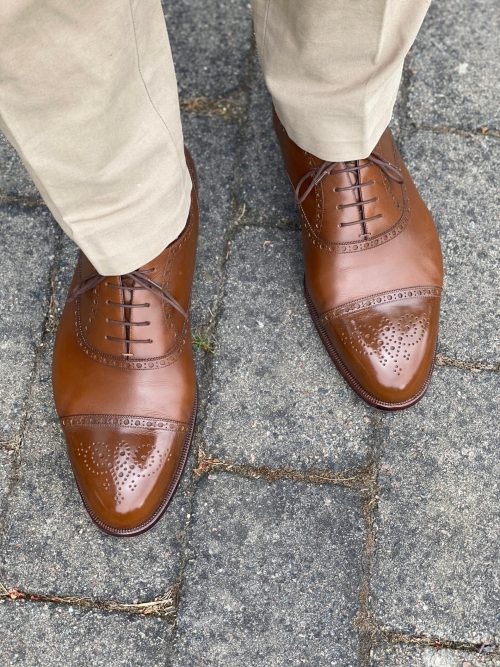 Creases on the toe cap of my pair of bespoke Main d’Or semi brogues. Eiji Murata of Main d’Or have relatively long toe caps, and to not have the stiffener cut in to my foot it needs to be shorter than the cap. Hence creases appear on it.

Looking at the toe stiffener, for example Western European makers in general have relatively long stiffeners, while Eastern European makers use shorter toe stiffeners (exceptions in both directions though). And when it comes to toe caps, US makers and some Asian ones prefer short ones, while for example Spanish brands especially from Mallorca have long cap toes. And also of course the shapes of the lasts make the lengths of both these things varying as well. But important to know here is that nothing here is wrong, it’s just different. 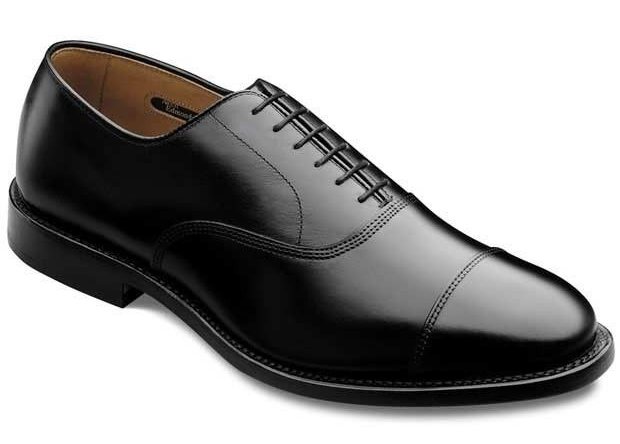 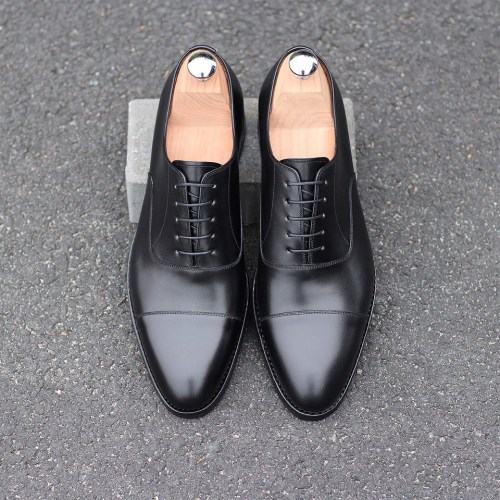 In the cases that you have a toe stiffener that is shorter than the toe cap, the shoe will crease on top of the cap. It’s very logic. People are fully free to think that this looks wrong, but you can’t say that it IS wrong. If you don’t like it just avoid makers that do shoes like this, but leave those who don’t think it’s matter with their perfectly fine shoes with creases on the toe cap alone. In rare cases creases on the toe cap can mean something is wrong, like fit etc, which have caused the actual stiffener to bend in a faulty way or so, but this is surely exceptions. 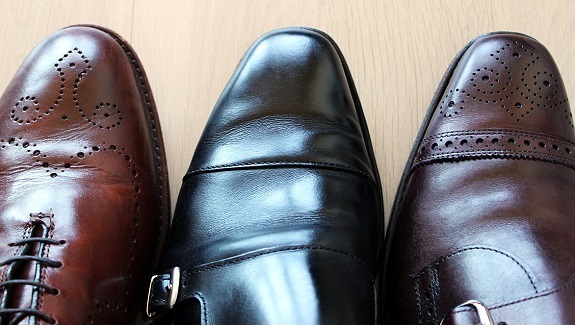 In the middle here you see bad fitting shoe which has forced the toe stiffener to collapse, a rare example of creasing on toe cap that is due to something being wrong. 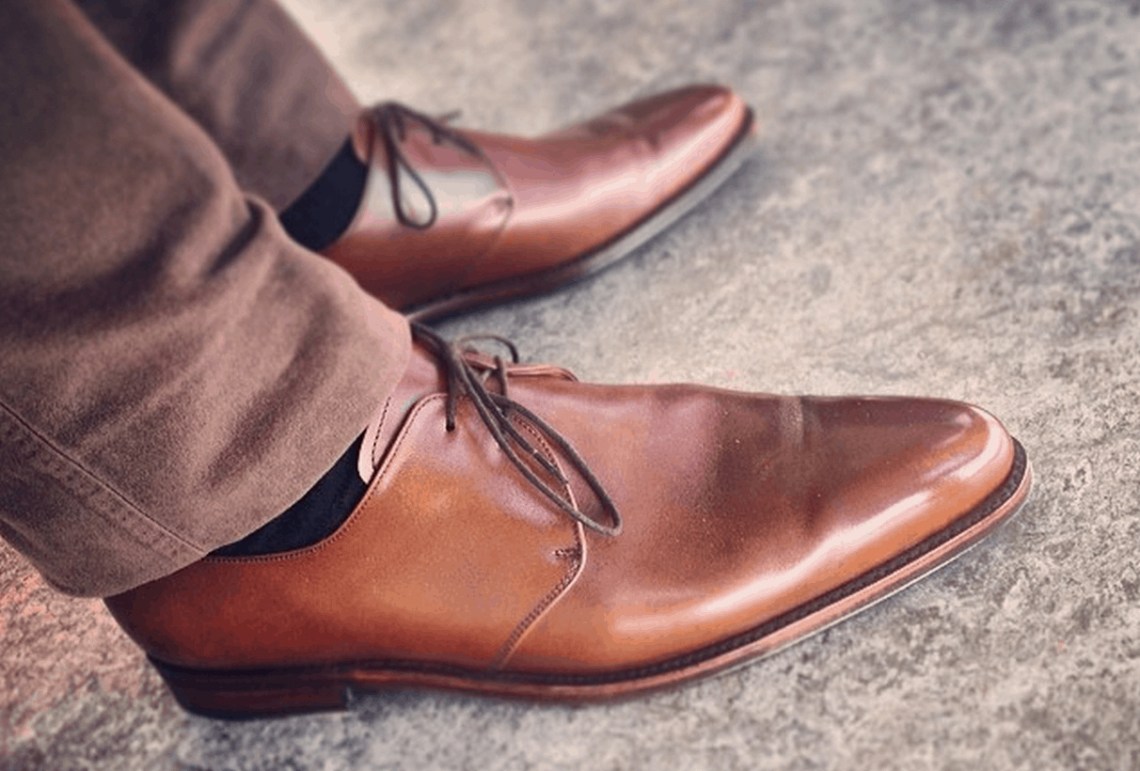 On shoes without cap toes, one don’t think about where the creases end up in the same way. These plain toe derbys have short stiffeners placing the creasing relatively far front.

Due to this, I always state that you should always make sure to take into account the internal toe stiffener when you shine your shoes, and if you do a high shine you only do this over the toe puff, no matter if it aligns or not with the toe cap. It’s only the stiffener that won’t move and over which you can put plenty of layers of wax. And when internet experts tell you that it’s wrong with creases on the toe cap, you may just shake your head and ignore them.

Learn more about how shoes crease in this article. 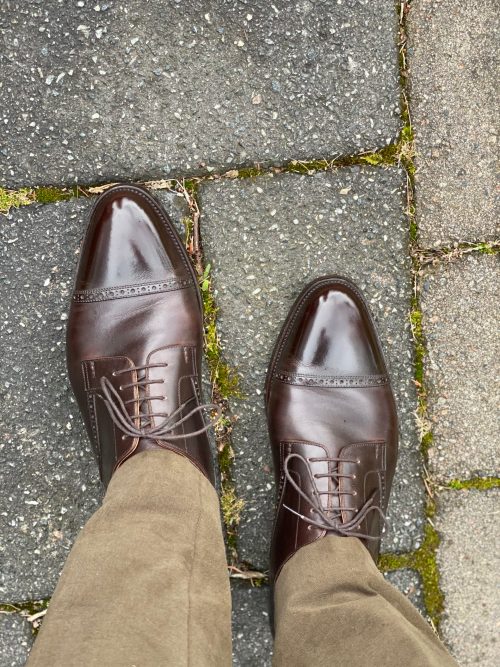 Derbys with a brogued cap toe, which shorter stiffeners than caps than stiffeners resulting in small creases on top of these. I mainly put a shine on top of the stiffeners, not over the entire cap.