The most famous, prestigious and formal shoemaking education in the world is Les Compagnons du Devoir et du Tour de France, which most of the famous names in French bespoke shoemaking has been through. A journey which takes the trainee to a number of different workshops with the aim to develop both the person and of course their craft. Shoegazing sat down with compagnons trainee Pierre-Baptiste L’Hospital to learn more about this traditional shoemaking education.

Les Compagnons du Devoir et du Tour de France is a complicated name, and it’s rather complicated to explain what it is. Many who are really into classic shoes have at least heard about it, but few know more in detail what it is, especially outside of France. To put it briefly – it’s a trainee programme for various crafts. To go more in-depth – well, that’s what this article will do. And we’ll do it with the help of Pierre-Baptiste L’Hospital, a 22 year old aspiring shoemaker who is three years into his journey within likely the most traditional and strong craftsmanship education in the world.

Pierre Baptiste grew up in Alsace in the northeast parts of France. He graduated high school in economic science in 2017, and went to Strasbourg to study law. But his long passion for shoes took over after meeting a few people involved in a shoe organisation in Strasbourg, and after receiving full support from his parents, he decided to pursue this dream instead.
– I had of course heard about Compagnons du Devoir, and when doing research I immediately felt that this was the best way for me to become a shoemaker. The fact that it is much more than just training, that spoke to me, says Pierre-Baptiste L’Hospital. 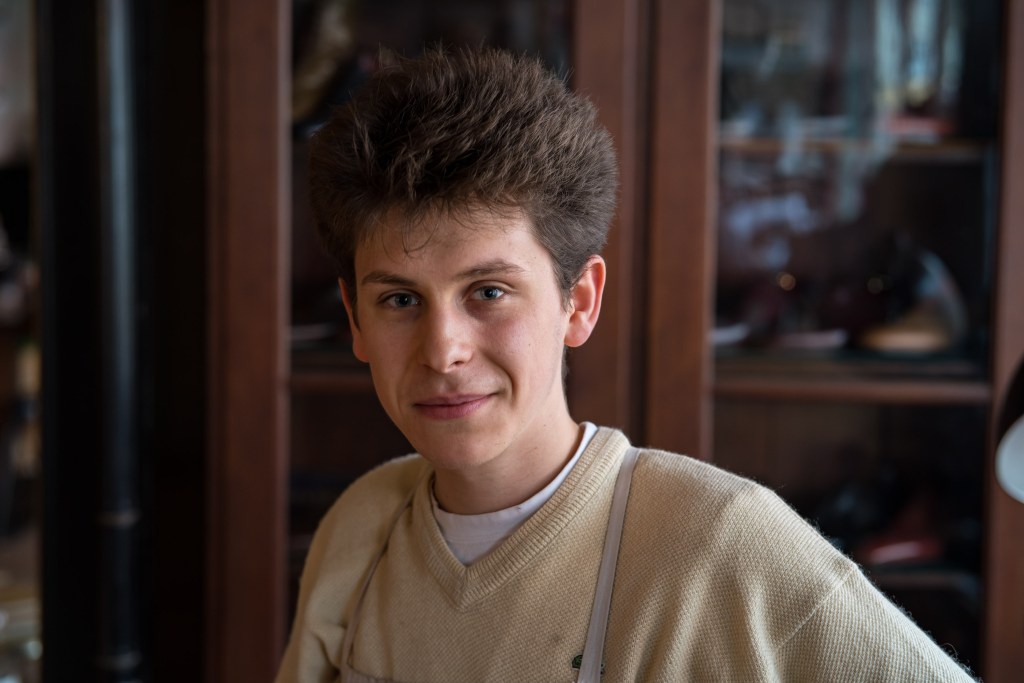 The full name for the organisation is Association ouvrière des Compagnons du Devoir et du Tour de France (AOCDTF), and it was founded over 70 years ago. It’s an organisation that gathers all types of craftsmanship, today it includes furnishing and interior job, these are tiler, cabinetmaker, carpenter, painter, plasterer and flooring technician. We have building construction jobs, which are carpenter, roofer, mason (bricklayer), metalworker, plumber and stonecutter. And finally we have the area called flexible materials, with saddler, leatherworker, upholsterer and shoemaker. The main task for the compagnons organisation is to organise educational trainee programs within all these crafts, which in all cases mainly take place out in reality at various companies, and an important aspect is that every participant of the programme is staying at a number of different places to really get a wide knowledge and experience. Compagnons du Devoir has establishments around France where the trainees live, sort of like at student dormitories, where one live together with other trainees from various crafts and share their experiences.

When Pierre-Baptiste L’Hospital got a place in the programme, it worked a bit like when applying for a job. He sent in a personal letter and CV and got to go to several interviews, before being offered the position. And this wasn’t just anywhere – it was with the legendary shoemaker Anthony Delos as his mentor, with his workshop outside Anger. This is the second workshop of Berluti, the famous LVMH owned luxury brand, which still keeps their bespoke shoe heritage intact even if it constantly has been broadening its offerings in recent years. Ten shoemakers work together with Delos, including three other master shoemakers (one being Athanase Sephocle, the other main mentor of Pierre-Baptiste) and one master upper maker.
– I couldn’t dream of a better place to start my journey into making shoes. It’s an amazing workshop, and Anthony is a very caring and thorough mentor, says Pierre-Baptise. 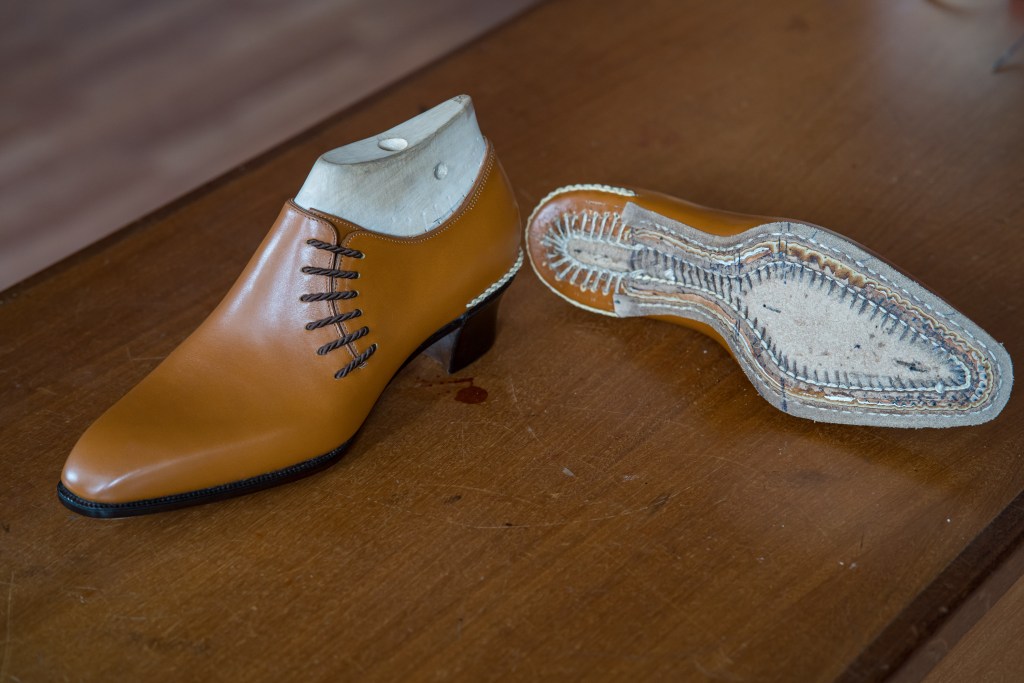 This finished women’s shoe and one made to welt stage was made after one year with Delos, and was the entry into formally becoming a compagnons trainee. 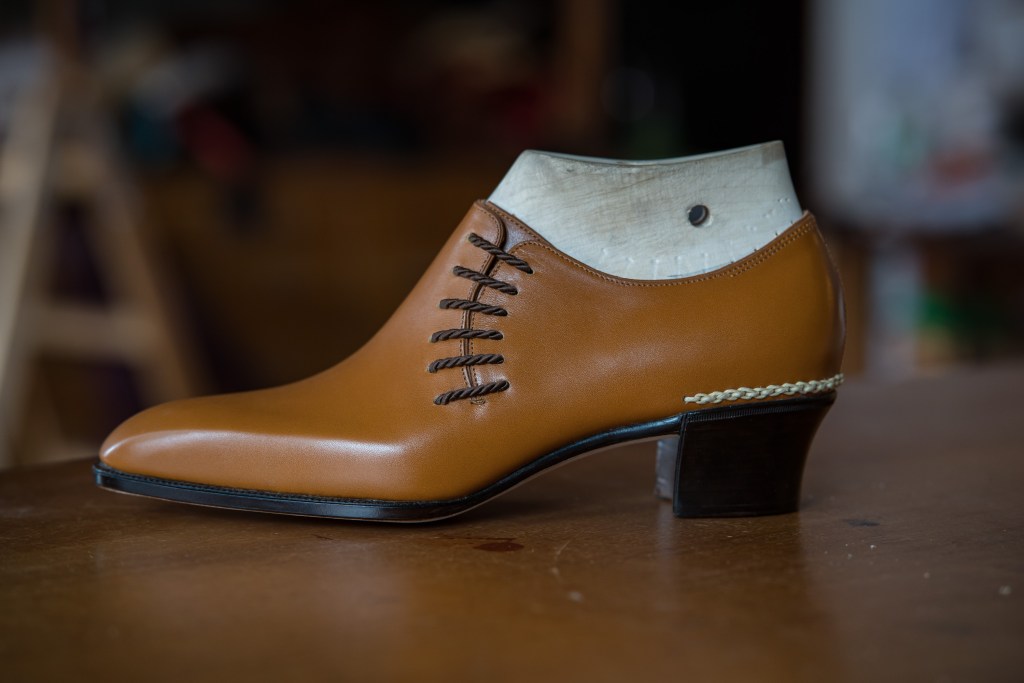 Fine work after only one year learning. You can see that Pierre-Baptiste spent time with Delos, with the heel decoration here. 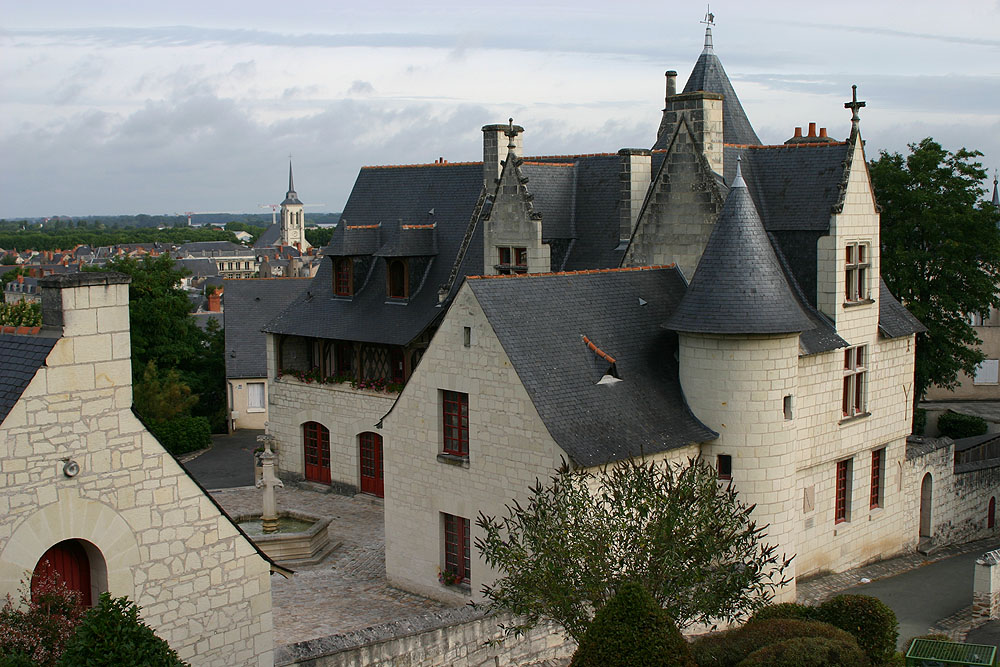 These type of buildings the Compagnons du Devoir has access to. Here in Saumur Pierre-Baptiste lived during his two years working at the Delos workshop. Picture: Joseph Guegan

The programme for shoemakers has many set steps towards officially becoming a compagnons. Pierre-Baptiste’s first two years he lived in the house of Compagnons de Saumur, at that time he alternated his practical training in the Berluti workshop, and theoretical training at the CFA des Compagnons de Pantin near Paris, which leads to a formal theoretical degree. After one year he had to make an application shoe, in his case a women’s side laced boot, where one shoe is finished and one shoe is made to the welt stage. The quality of this work is judged and one do an estimation of the trainees’ possibilities to become a good shoemaker, and it’s first after this that one gets a formal place on the programme. Pierre-Baptiste then stayed for one more year at the Berluti workshop to further develop his skills, which he also showed when he was crowned the best apprentice of France, in a bi-annual contest organised by Société Nationale des Meilleurs Ouvriers de France. It gathers over 6,000 candidates from more than 90 trades, all 21 years of age or less, and in the shoemaking category Pierre-Baptise L’Hospital won first local, then regional and eventually the national title. The level of make on his double monkstrap contest shoes surely was impressive giving that he’d only been working with shoes for two years. 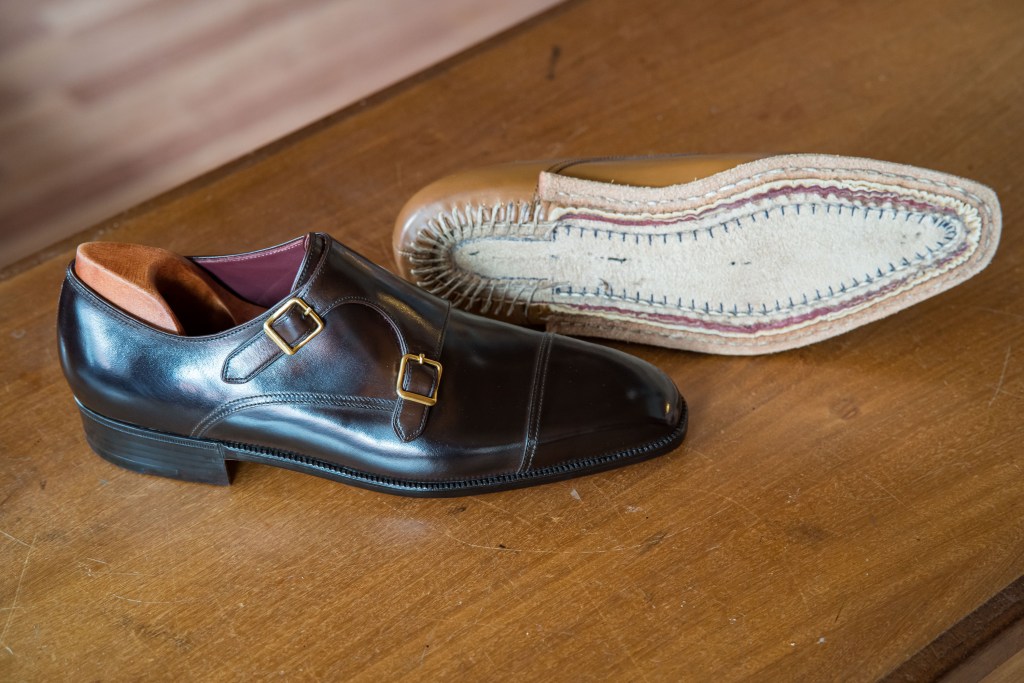 Pierre-Baptiste got proof of his talent, with the reception of this contest shoe and its sibling (without dye) in welt stage. 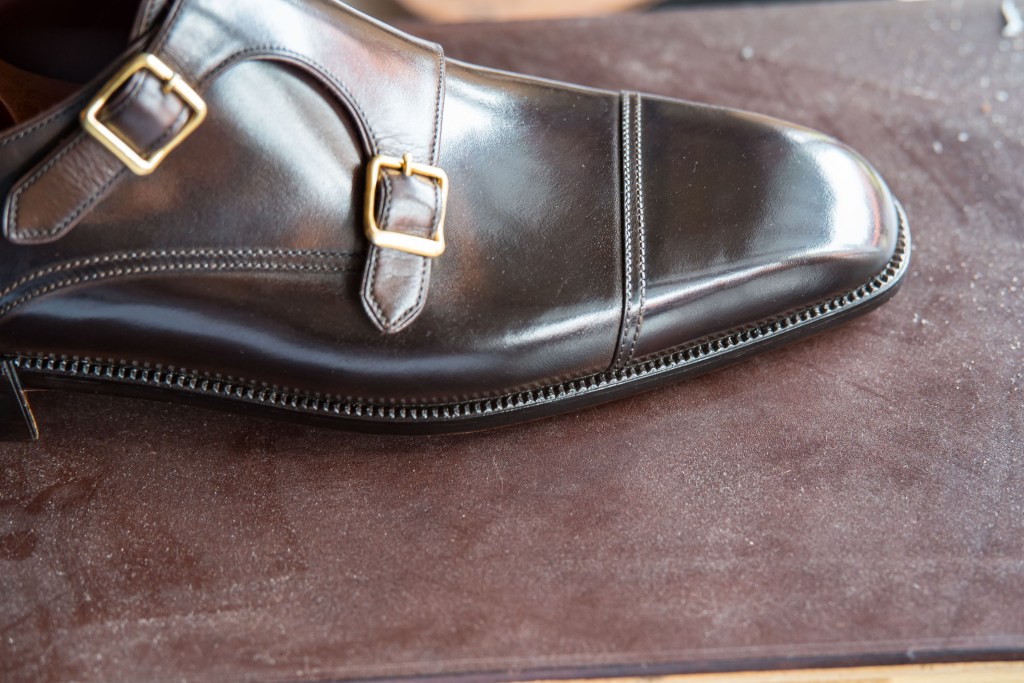 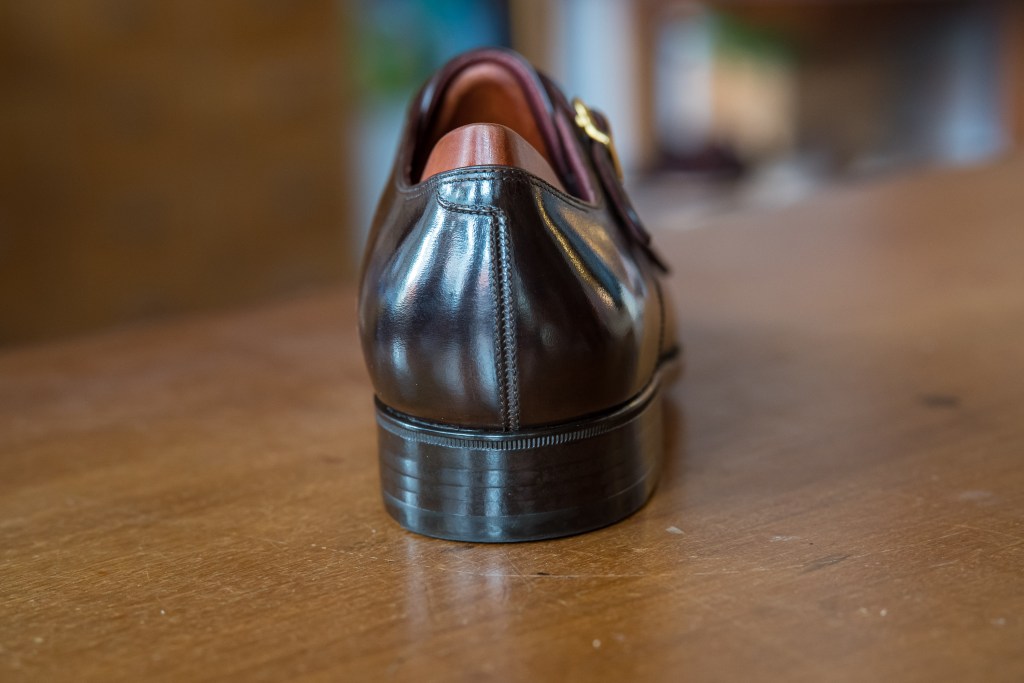 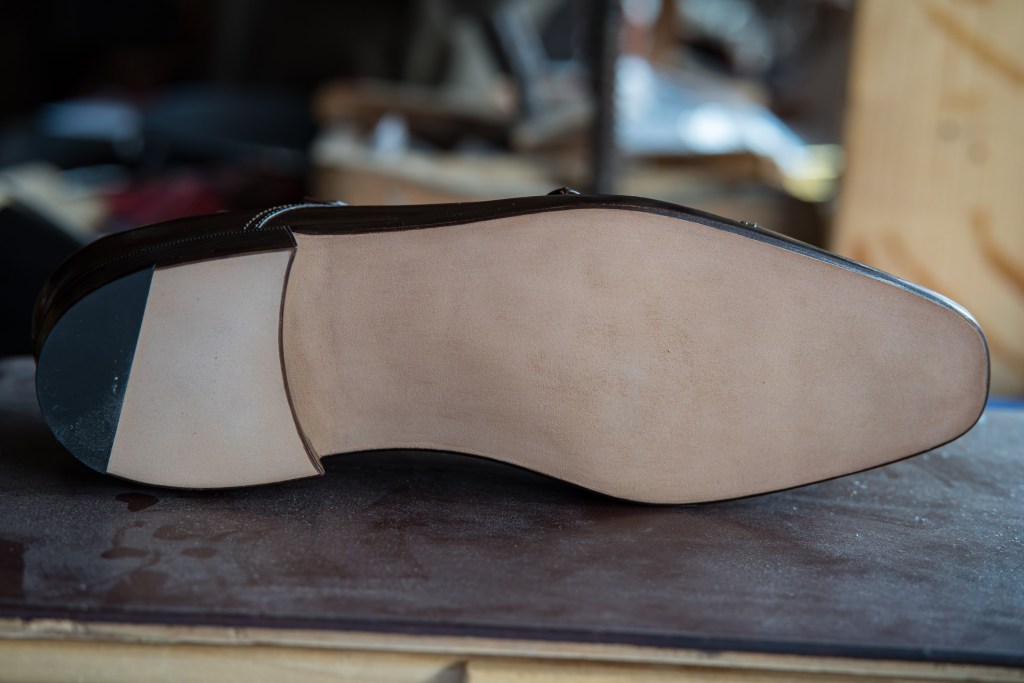 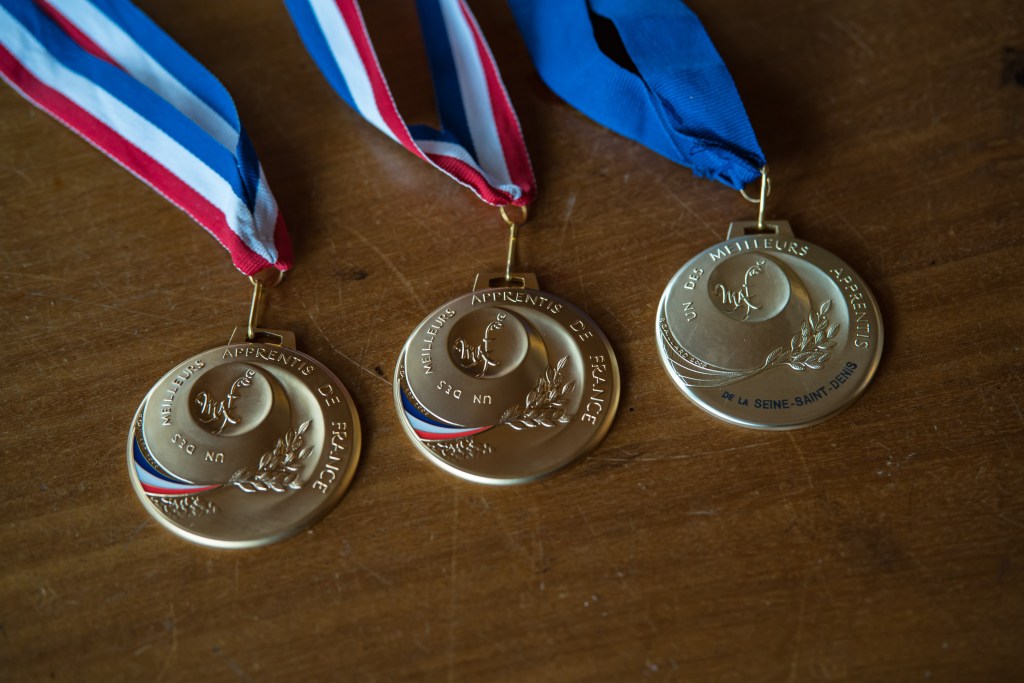 Medals that the contest entry received, local, regional and national.

After these first two years, a ceremony takes place, and then, it’s time for the apprentice to leave his or hers “home workshop” and start the tour de France. A tour that will go on for no less than six more years if completed in total, with a new location and workshop each year, and which nowadays also include at least one year abroad in another country, to further broaden the trainee’s experience of various school’s of shoemaking, cultures and languages. Cause it’s indeed so that the compagnons programme do look at more than just the skill of the craft, it’s about personal growth as well. For Pierre-Baptiste L’Hospital, his first stop was the capital, and the mythic women’s bespoke shoemaking workshop of Massaro.
– The compagnons has a number of places that one can choose to go to, or I can find places on my own. In my case, I had pursued the Massaro place myself, and was very happy to get a chance with them, Pierre-Baptiste says.
At Massaro he of course got an opportunity to develop his work with women’s footwear, but also learned the basics in orthopaedic shoemaking here. A shoe that he did at the end of his time with Massaro. You could see that he has progressed further since his first shoe two years before this was made.

For the fourth year, Pierre-Baptiste looked into having his international year. And he found it in Freiburg, Germany, where the world champion in shoemaking 2018, Patrick Frei, and his partner Kazuya Kimura have their workshop. An aspiring compagnons do get a salary from each place he stays at. Not huge, but enough to make a living, and it increases slightly each year as the trainee gains experience. In the case of the Frei workshop, they managed to get a scholarship from the region, which made it possible for them to have Pierre-Baptise with them for a year.
– It’s a very inspiring workshop, Patrick has so many ideas and is full of creativity, and Kazuya is a genius at shoemaking, even if he’s rather young. 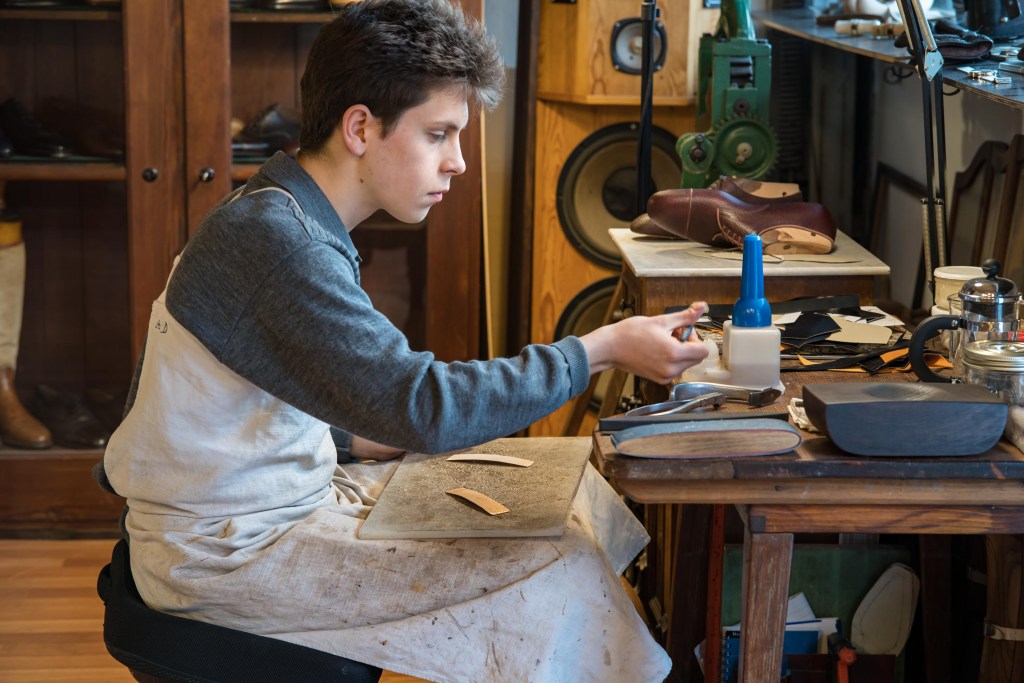 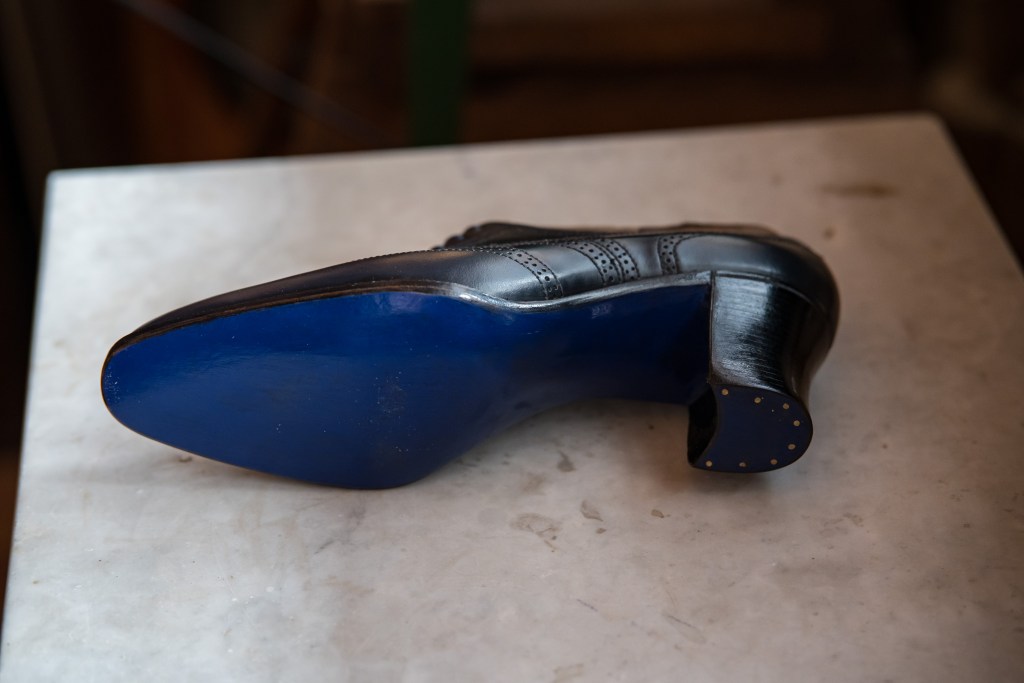 Already now in December he is to decide on the next place of his shoemaking journey, even if he’s not leaving Germany until September. As mentioned, it’s all well-organised within the Compagnon du Devoir. Pierre-Baptiste L’Hospital is still looking around for options and is open to many different things. Then, the process goes that after five years in total, one are to make a masterpiece, which will be judged and approved, and one are officially a shoemaker. Then, the final process begins when one becomes a “journeyman” and go on with three new places for three years in total. A new, final masterpiece is made, and if this reaches the level needed, one are a full compagnons.
– For those who finish this whole journey, one can be rather certain to have a job as a shoemaker. You can’t just pick and choose, but should surely be able to find a good place, says Pierre-Baptiste.
When I ask him about his dreams for the future, he first start with maybe the obvious one in his situation.
– Well, should there be a position available in Anthony Delos’ Berluti workshop, it would of course be extremely interesting. But I would also love to work in Japan, I admire the Japanese mentality and perfectionism.

We talk a bit about what’s the reasons that the compagnons programme still is so strong, unlike in most other places of the world. One reason could be that the Compagnons du Devoir has managed to modernise itself in time, for example with including women (even if rather late looking at it from the outside) who have a majority of all trainee places today, looking at all categories in total. Also, of course, the fact that in France craftsmanship is valued high obviously matters.
– It’s part of our DNA, we hold these types of traditional labours high, working with tools and our hands and being connected to the materials, Pierre-Baptiste L’Hospital says.
As it looks, Compagnons du Devoir will continue into the future to bring out both some of the best shoemakers and other craftsmen and women for a long time. A great thing indeed. 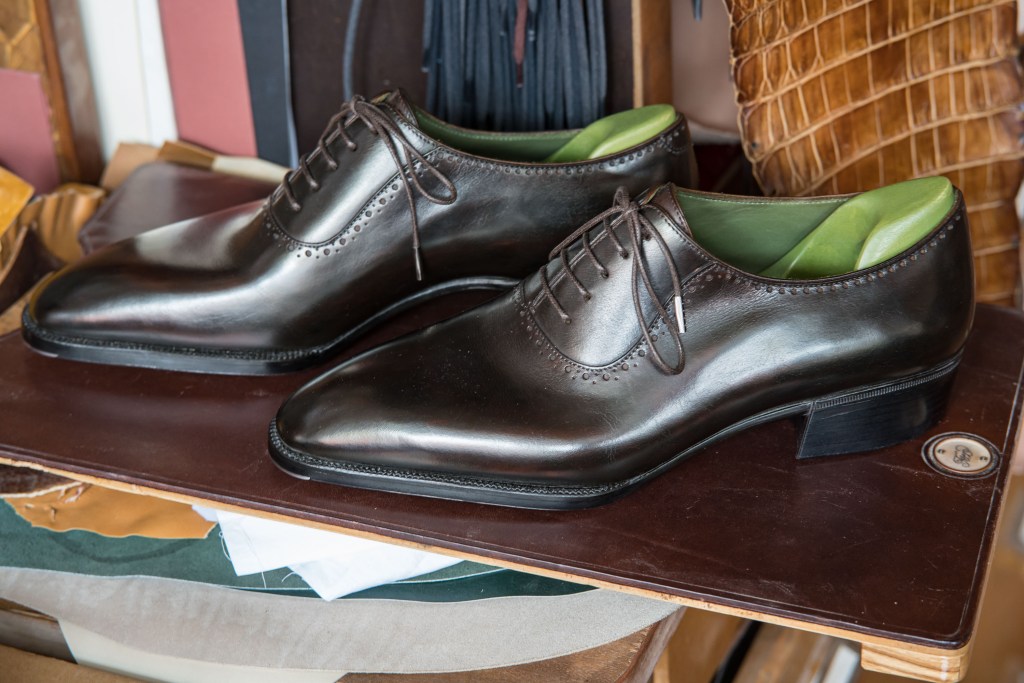 Every year the trainee makes one full pair, this is Pierre-Baptiste’s latest one. 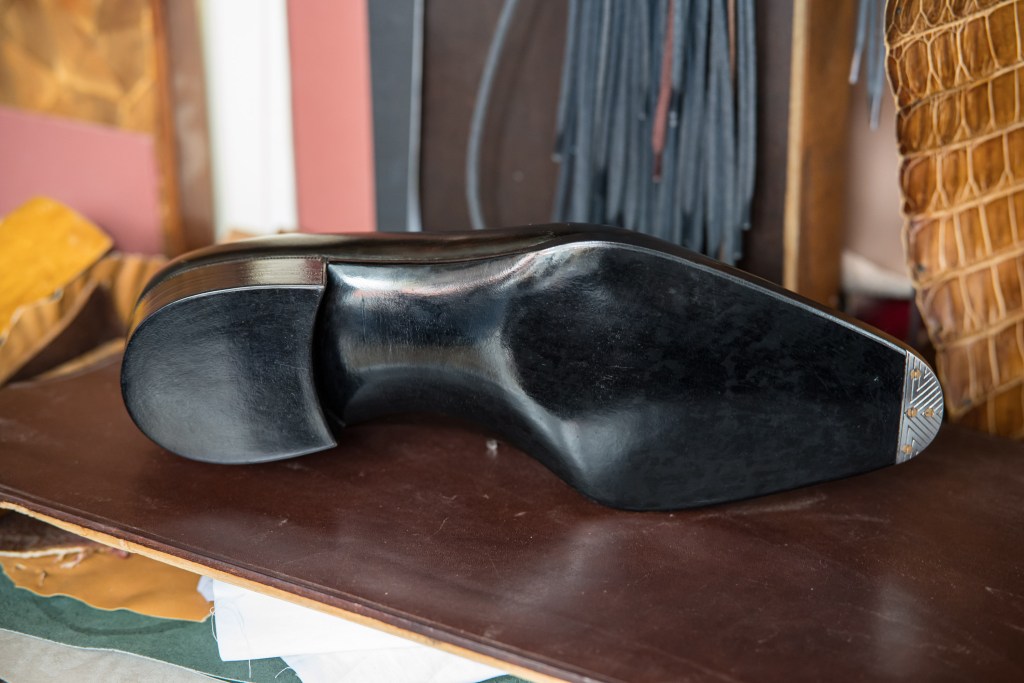 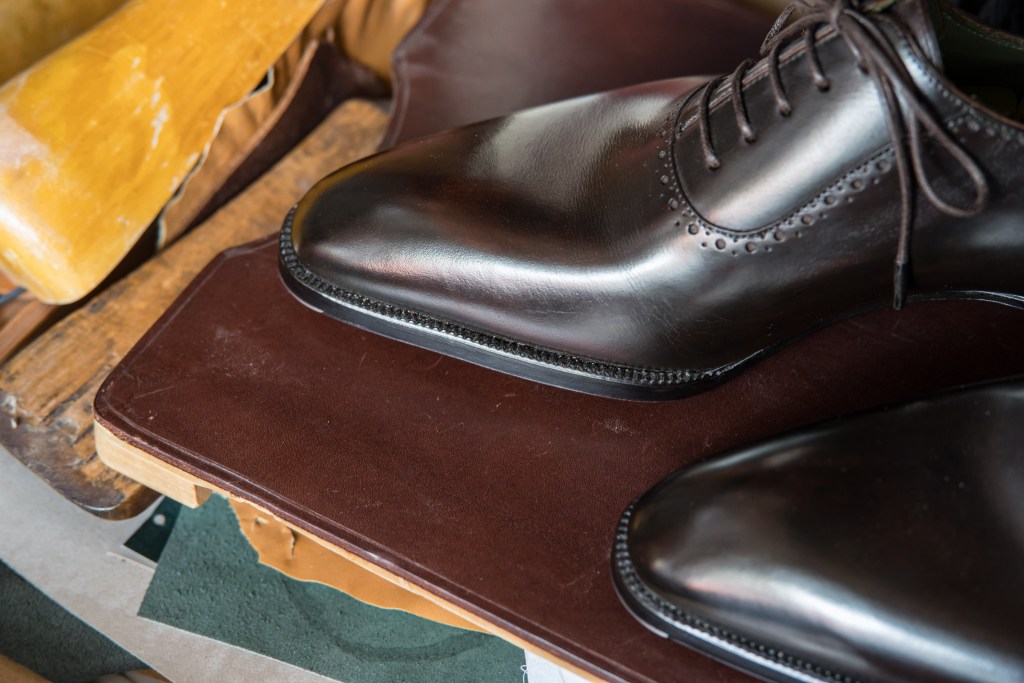 I like the design with brogue holes without the stitching below.