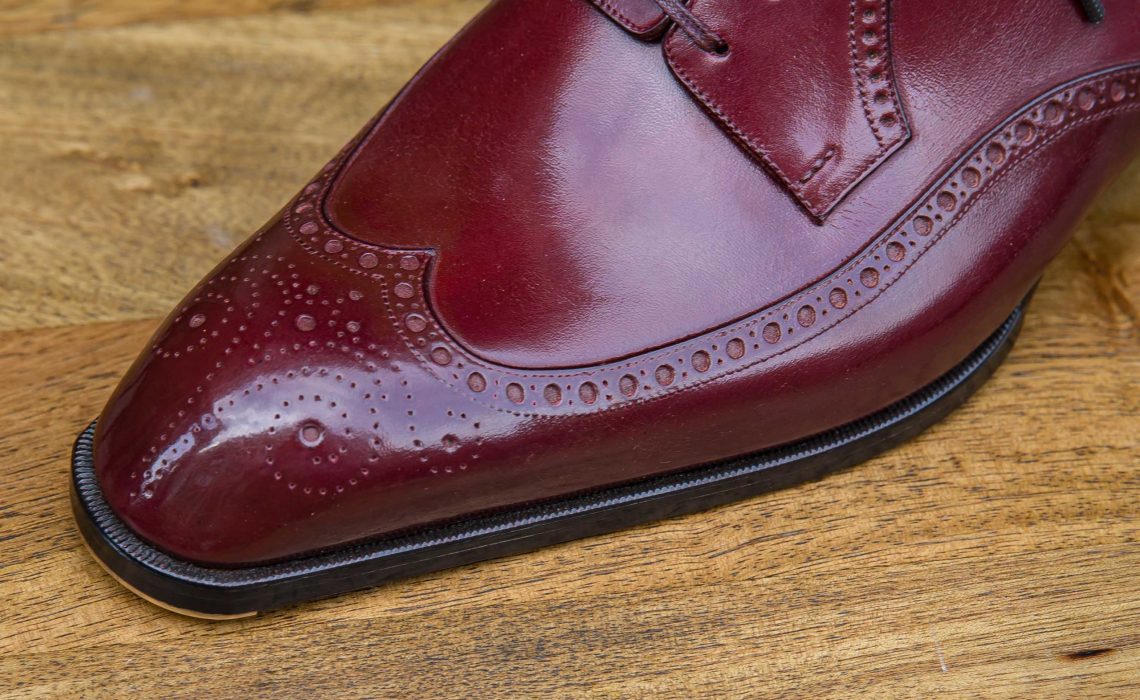 Since it will take a while before I’m finished with the huge posts covering all the 30 contestant shoes of the shoemaking world champs, I always do a quick picture special showcasing the top three, to let folks mind at ease a bit. See the amazing craftsmanship of Wataru Shimamoto (1st), Ken Kataoka (2nd), and Kenjiro Kawashima (3rd).

This past weekend we finally could host the London Super Trunk Show again, and what a day it was with almost 1,200 visitors. There will be much more on that in a large report later this week, and as mentioned above, later on I will summarise all the 30 contest shoes for the World Championships in Shoemaking, a contest organised by Shoegazing and The Shoe Snob, in collaboration with Kirby Allison and the book Master Shoemakers. But since there is a lot of work putting those contest articles together and it will take a while, here is a look at the top trio. As I wrote ahead of the event, we had lots of makers registered, but there wasn’t more than 30 shoes that were sent in. For us organising, it was a bit of a blessing to be honest, since it made it much easier to administrate. The long wait obviously played one part in few of the registered sending in, likely many who know they wouldn’t compete for tops spots have realised it’s not worth sending in shoes (since overall level was highest ever), and we also know that many makers have become so busy with work this spring that they didn’t have time to finish the shoes (the fact that bespoke customers return for real now is just great).

As always, we expect comments on wearability, I want you to note that this is not a part of the criteria (read more in the Call for competition), we only state a size EU42/UK8 in length, and that width can’t be more than two width sizes up or down from an acceptable standard width (both since it’s not important in this case, and since it’s very difficult to judge what wearable would be. For example, what type of foot would have to work in the shoe to make it called wearable? Would it be enough to be able to put on the shoe, or would one have to be able to walk in it? If the latter, would ten steps be enough to call it wearable, or how many? Etc.). For this contest, the craftsmanship of the shoemaking (not lastmaking/fit since it’s extremely difficult to solve a contest judging fit) is in focus, along with design, and we see shoes that can be viewed more as concept cars, for example, where the maker creates a more artistic piece meant to showcase the craftsmanship achievable. We saw all types of shoes in this contest, and more artistic shoes ended up both high and low in the list, as well as more practical shoes ended up both high and low. This is the way contest was held hundred years ago, which has been inspiring this contest, and we know that all makers whichever shoe they make learn a lot from participating in tis contest, which is a great thing.

So, on to the top three.

Wataru Shimamoto is based in Kamakura, Japan, where he runs his own brand Orma Shoemaker, previously he worked with Il Micio / Hidetaka Fukaya in Florence. His entry is a shoe literally made to perfection. Basically flawless execution, which was where the shoe made the most points and built the foundation of the top position. Very fine sole stitching at 20 spi (stitches per inch), superb pattern and balanced design, great details like the assymetric heel and the intricate metal plates. All parts made by Wataru Shimamoto, except the metal plates which were done by Takafumi Mochizuki. 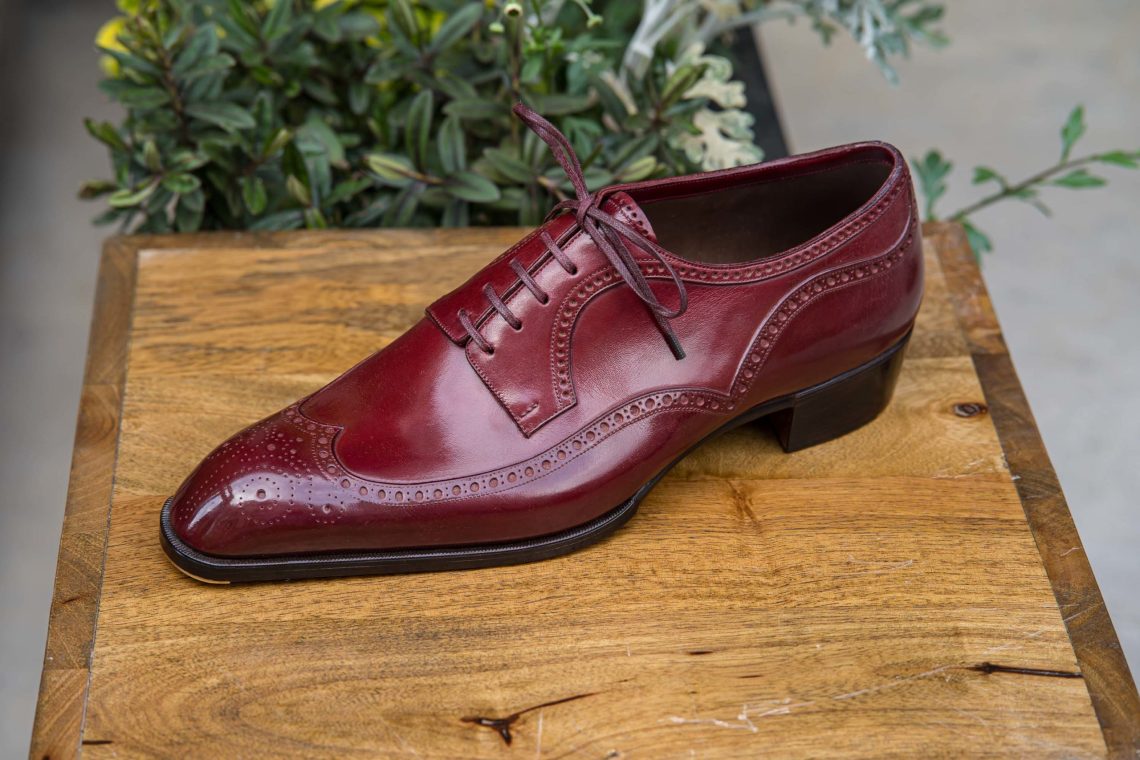 The winning shoe in all its glory. A seriously beautiful piece of footwear showcasing outstanding craftsmanship. 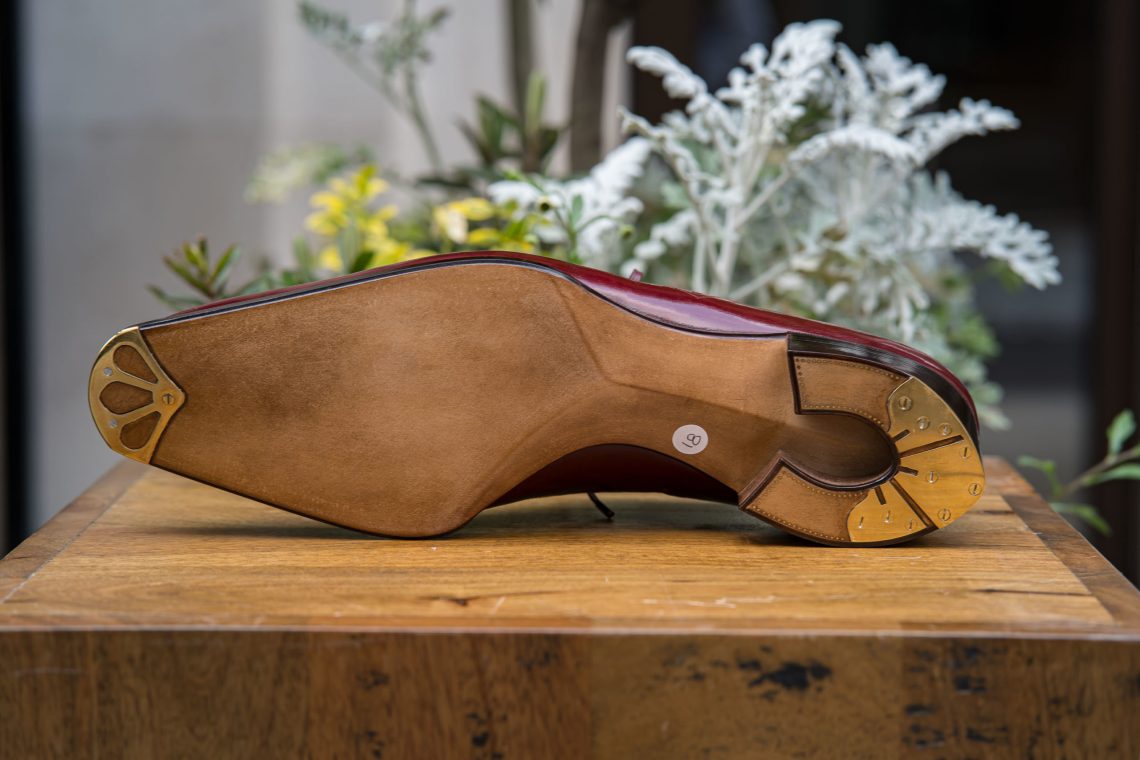 Sole with intricately made metal taps fitted into the leather, and with the horseshoe heel being an obvious eye-catcher.

Ken Kataoka is a young Japanese maker based in Tokyo, who is one part of the duo behind the brand Siroeno Yosui. This shoe is his baby that he has spent an incredible amount of hours on. Hand braided upper stitching, lovely painted gold coloured decorations all over the shoe, the neatest of sole edges, and so on. And oh, yeah, the heel is quite spectacular, and superbly well-made. The entire shoe is made by Ken Kataoka. 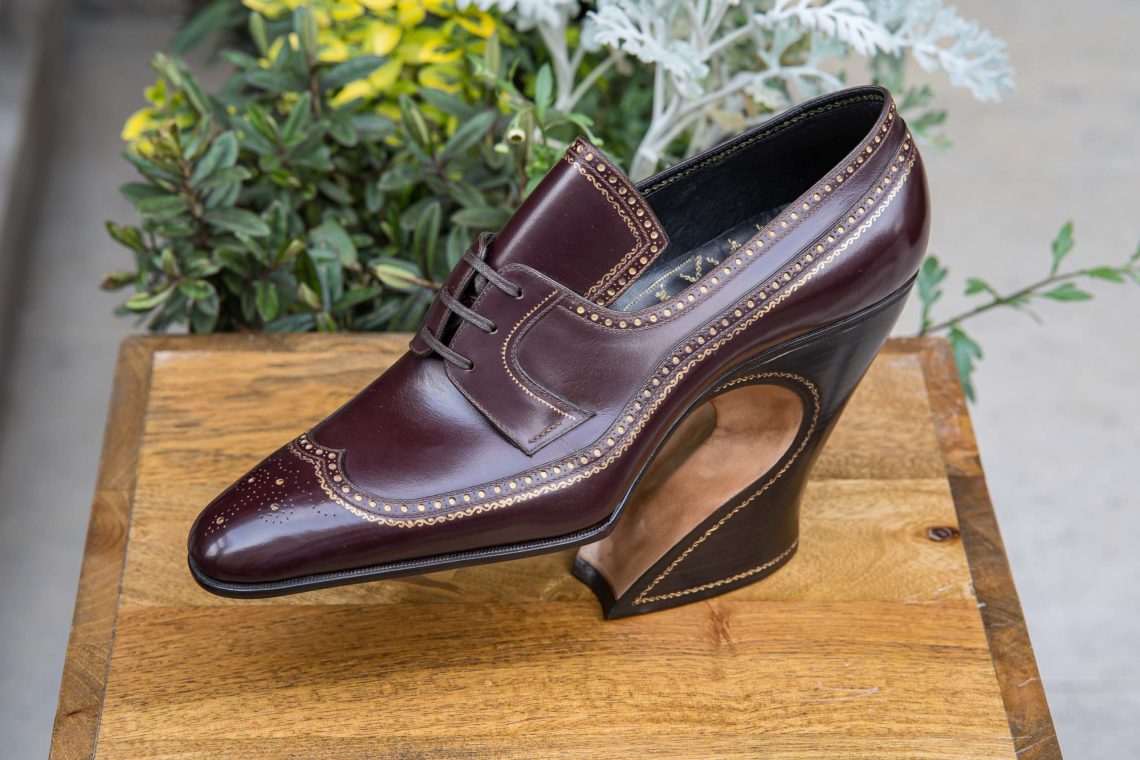 A seriously spectacular shoe in all ways possible, with so many fine details that you can look at it for hours. 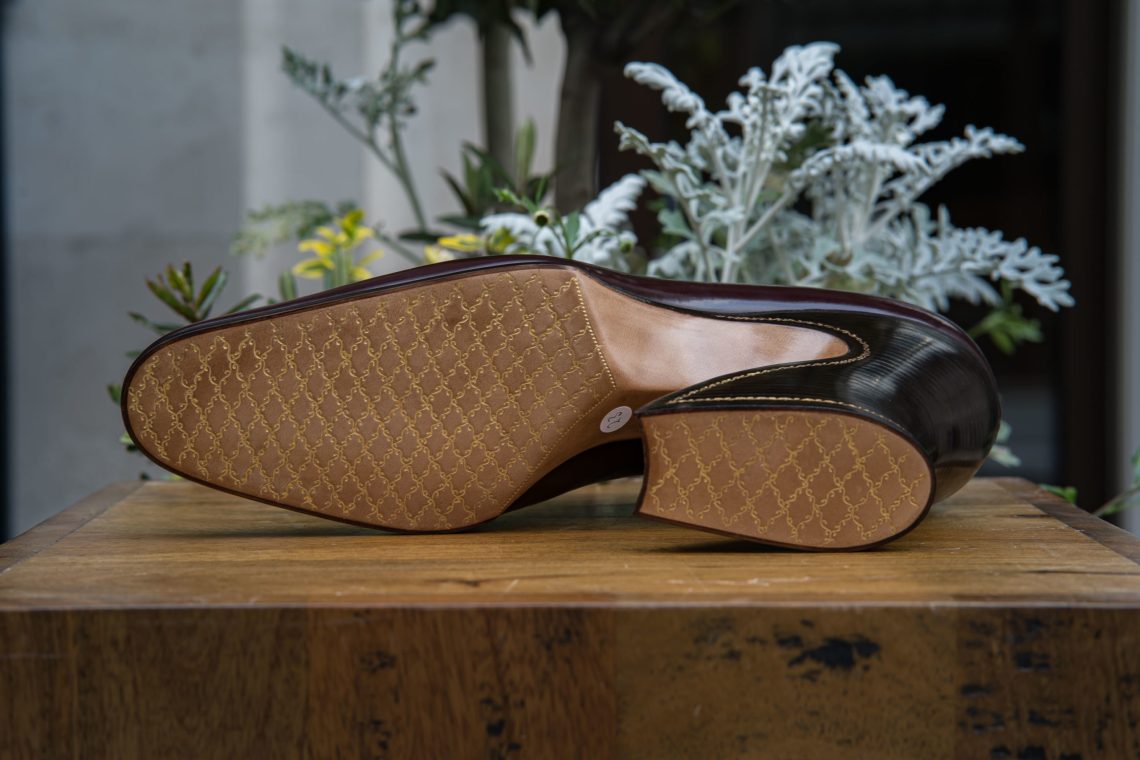 The sole has been wheeled and gold painted with the same type of pattern as used on other parts of the shoe.

Kenjiro Kawashima is based in Seoul, South Korea, where he both makes shoes under his own name as well as doing bespoke shoes for Norman Vilalta, with whom he trained with and worked for during three years. His great shoe has some extra stunning parts that immediately catch your eye, like the reddish Norvegese stitching with storm welt creating a stair shaped sole edge, or the handmade split and lift-stitching (I think it’s the correct term here) on the uppers. The whole shoe is made by Kenjiro Kawashima. 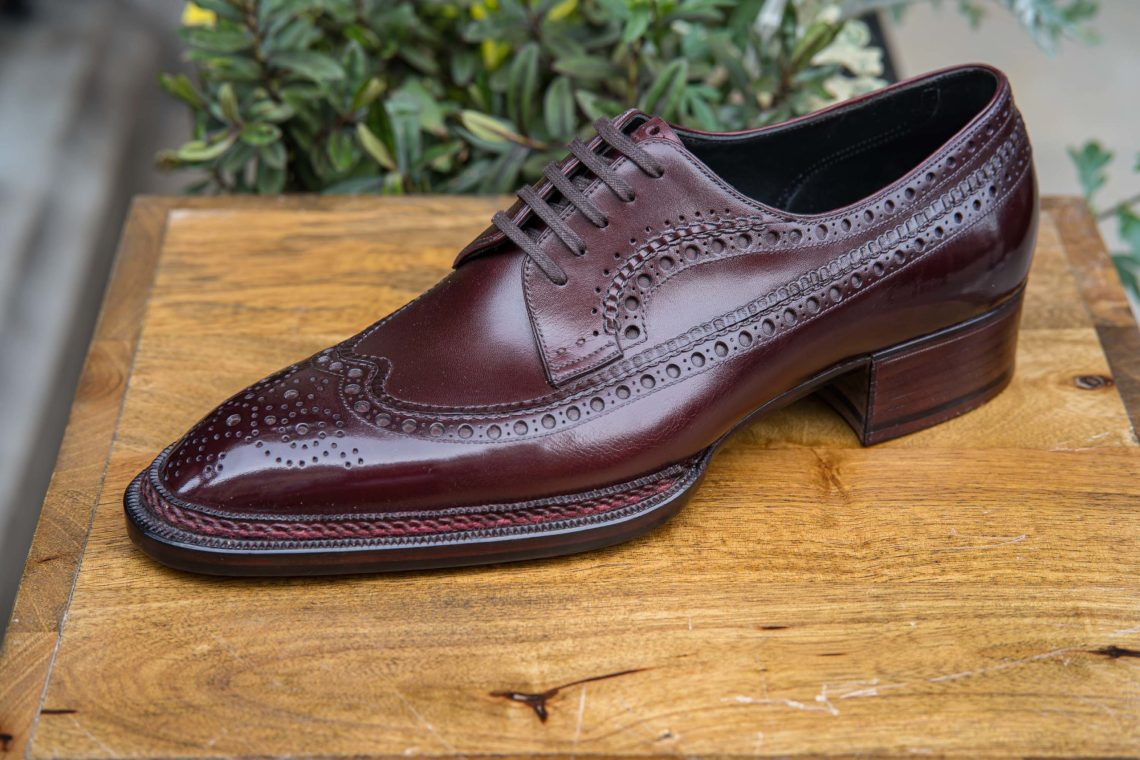 A longwing brogue with pondus, which despite the fact that there’s a lot of things going on manage to feel incredibly balanced. Not least the upper making is masterfully done. 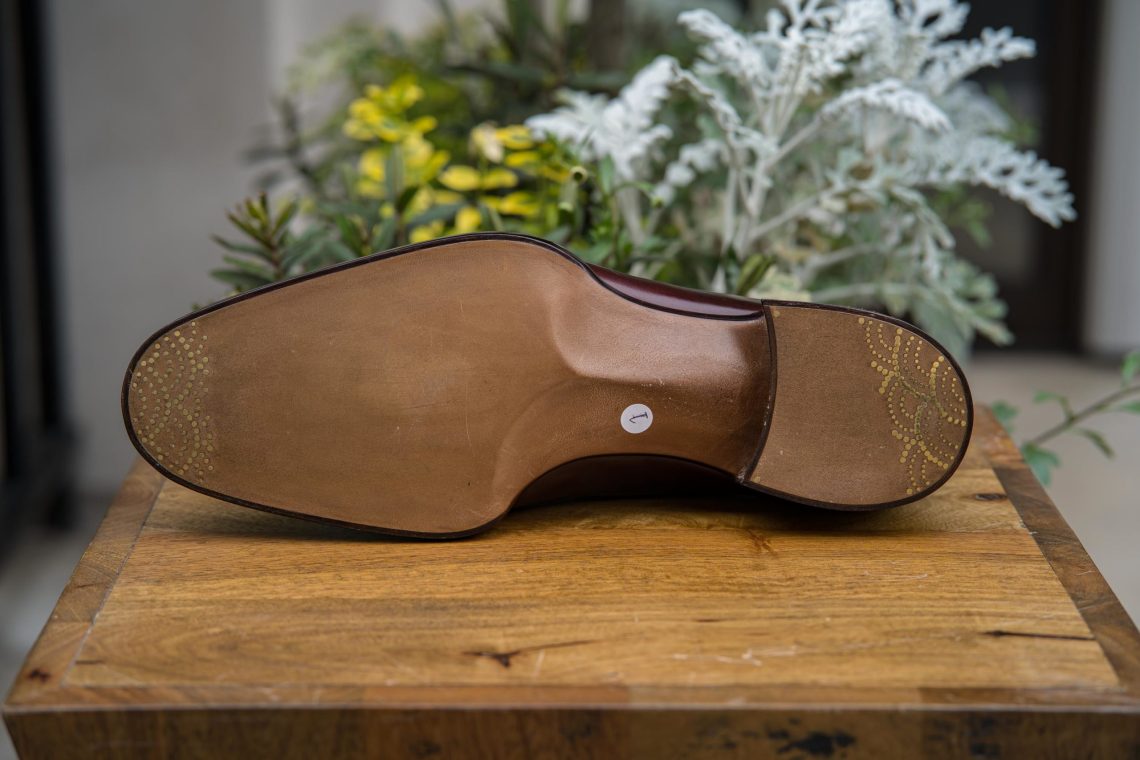 Clean sole with lovely brass detailing and a marked fiddle back ridge waist.