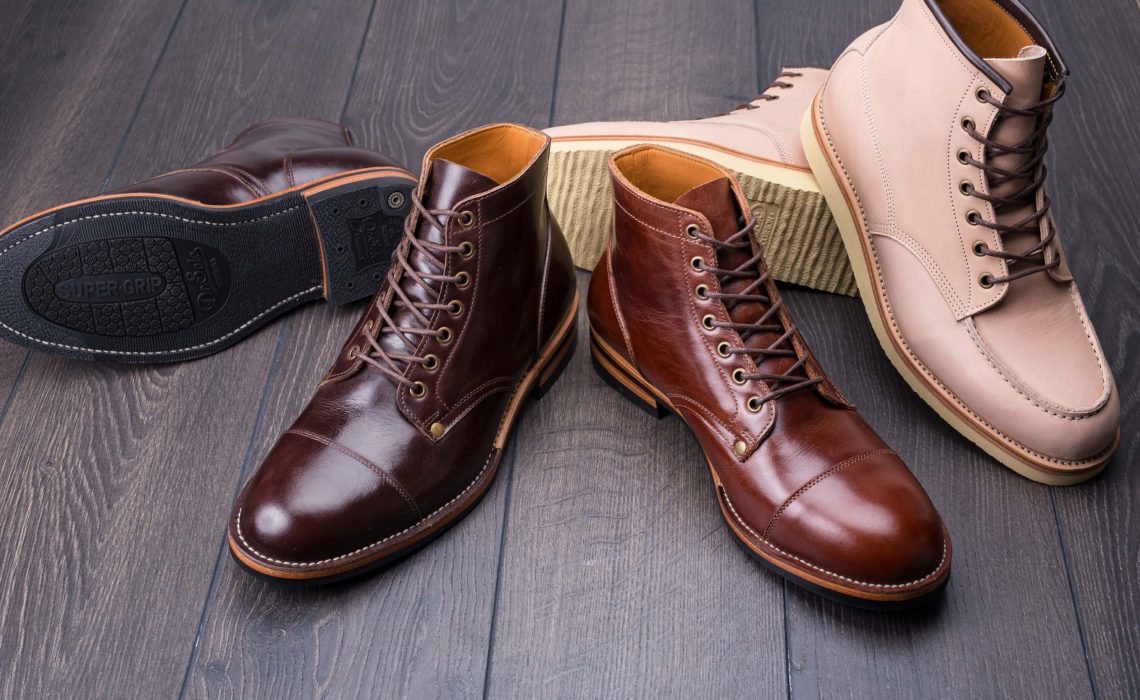 About a year ago the Swedish retailer Skolyx introduced two ranges of workwear boots, fully handmade ones from the Indonesian maker Midas Bootmaker, and Goodyear welted from the Spanish brand Yanko. Now it’s launch time for a bunch of new models from both brands – service boots, moc toe boots and NST boots – where the ones from Midas also are in collaboration with hyped sole manufacturer Dr. Sole.

First the mandatory disclaimer, as most readers already know, I work for Skolyx myself, so that is said. I’ve been highly involved in the work with both these workwear boots ranges we’re selling, and gladly the reception last year was really great, which meant it was a no brainer to both restock (second restock for some Midas actually, since production is small and demand high) and expand the offerings.

So, from Midas Bootmaker (learn more about Midas, the workwear branch of Winson Shoemaker, and their work in this article) we have two new service boot make-ups, which are made with a hand welted Veldtschoen construction. For those who don’t know, this basically is just the same as a regular hand welted shoe, but the forepart of the upper is folded outwards (while lining is still attached to the insole with the welt seam) and laid on top of the welt, and attached together with the handmade sole stitch. This results in what is among the most waterproof shoe constructions possible. These comes in two brown shades of the praised pull-up leather we used last round, which creases neatly and develops a great character. 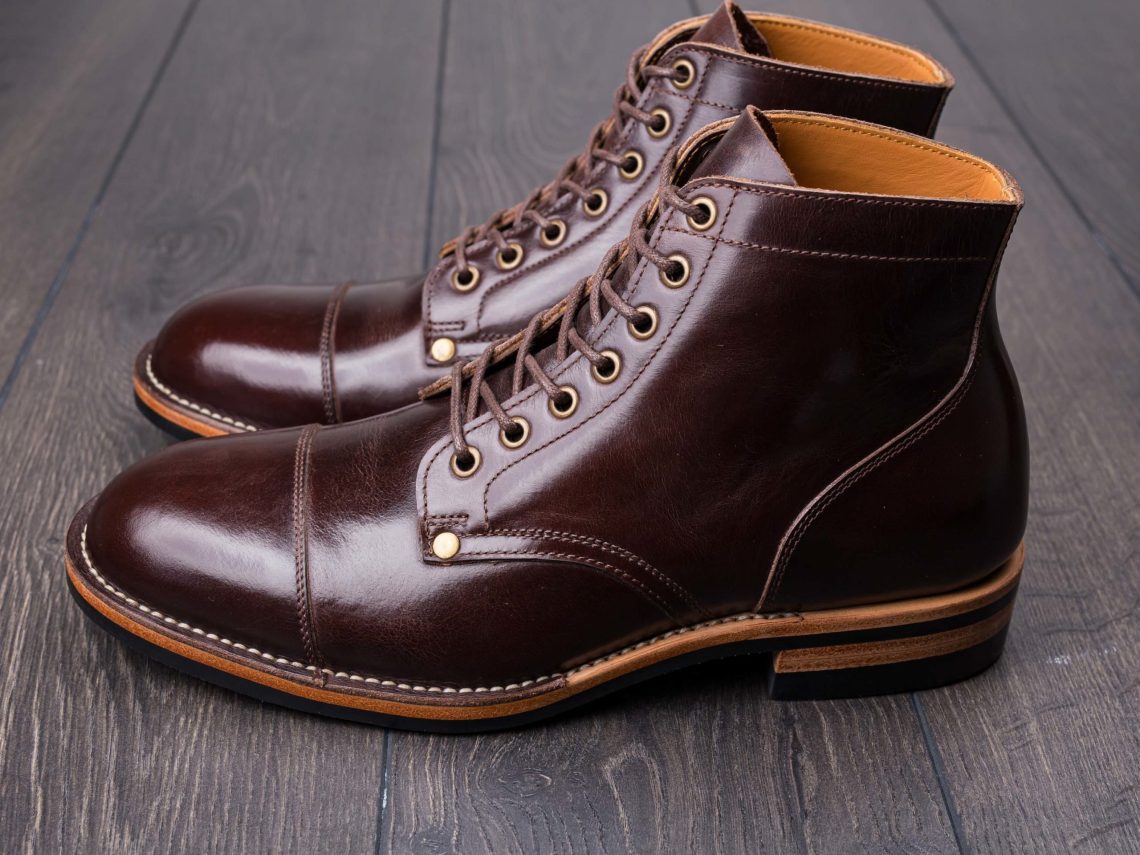 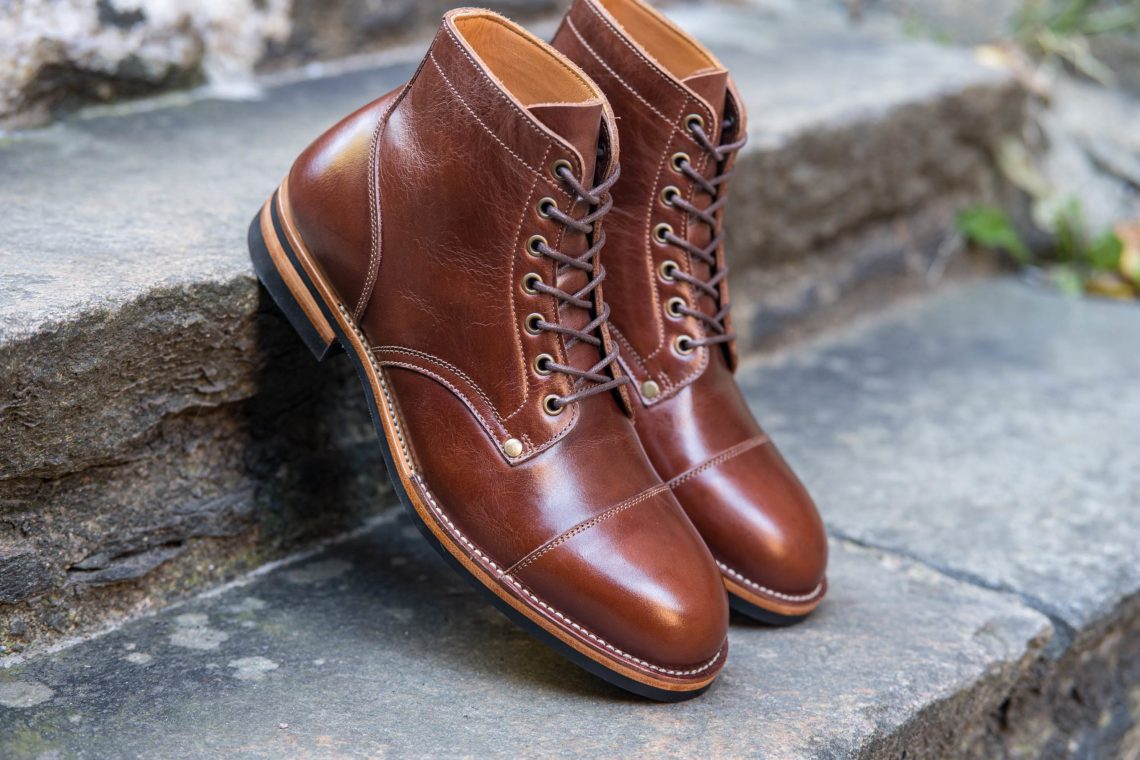 They are made on the Edlyn last, a round toe last perfect for service boots. Last year we used real leather for both heel and toe stiffeners, unlike celastic which is normally standard for Midas. Since the lasts are developed for thinner celastic stiffeners though, this resulted in the toes being experienced as quite bulbous by some. So from now on we do these with celastic toe puffs to get the balance right, but heel stiffeners is of course still real leather since it’s there that the material choice matters the most.

The soles on the service boots are the full Supergrip soles from the Taiwanese company Dr. Sole. Founded by Chao-Yung Lin, with inspiration from old military soles and known for their excellent rubber compounds, they have made a huge mark in the workwear boot world in recent years (do read this great interview with Lin on Stitchdown). The full Supergrip soles are a bit less common than the half ones, and part of the collab with Dr. Sole is to showcase more of their offerings to a wider audience. 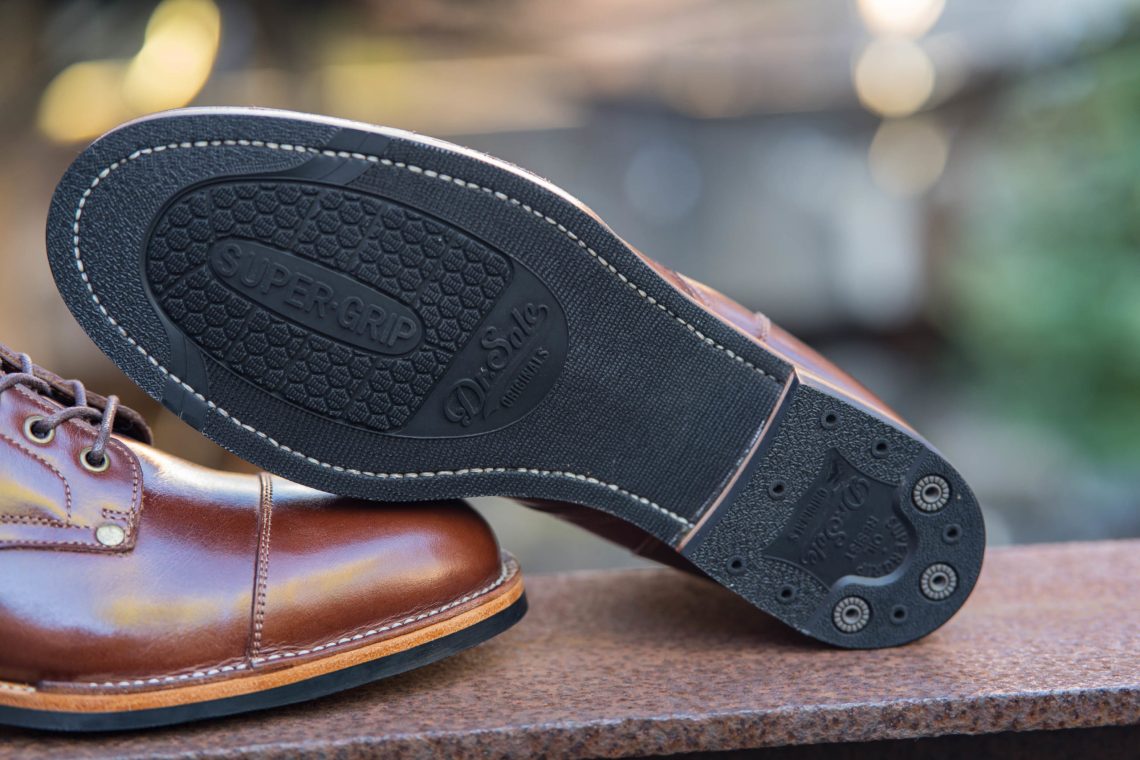 The Supergrip soles, excellent grip and traction, yet durable. Oh, and good looking. 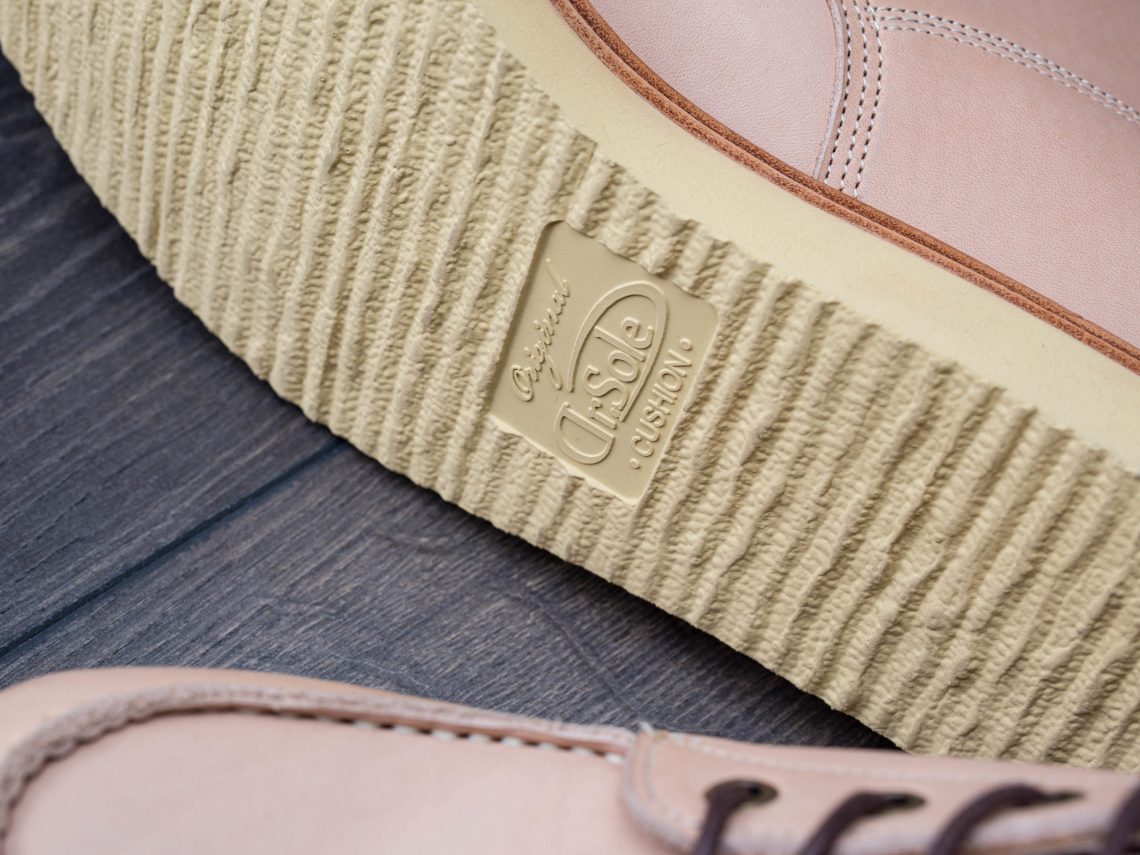 That also goes for the soft yet really durable wedge sole that we use for the other new Midas model, a moc toe boot (a model exclusive to Skolyx, which we developed together) on the high toe Landshaker last, which is a quite special one. The upper leather here comes from the same friend of Midas founder as do the pull-up, who sources his own hides and rents a drum at a tannery, where he tans the leather himself. This is a natural semi vegetable tanned leather, combining the awesome patina and character one get from veg tanning, and the suppleness and neater creasing of chrome tanning – the best of both worlds. The Midas boots now cost €470 including VAT ($365 excl. VAT), but due to current exchange rates and high shipping costs we need to raise it with 10%, which will be done on Monday October 17th, so kind of a launch offer now. We’ve also restocked the moc toe boot in brown pull-up once again. 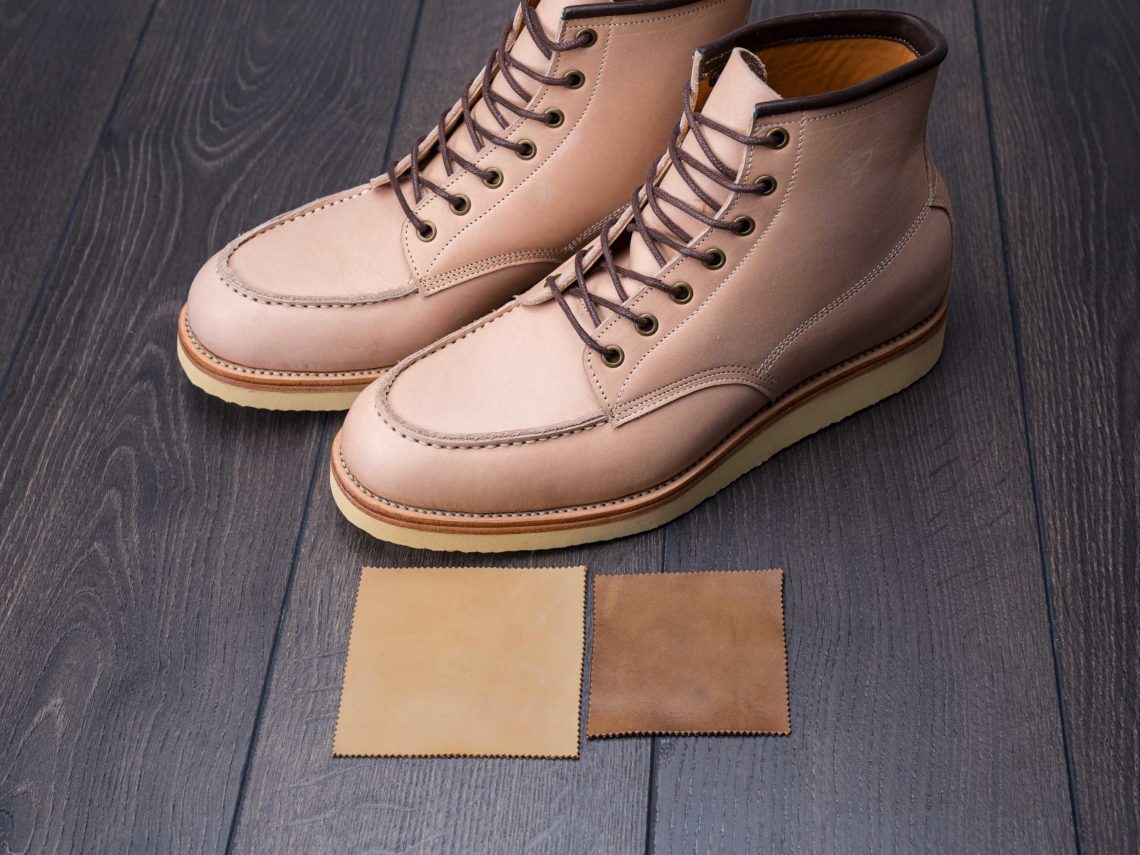 The natural semi veg tan leather is pale from the start, and here the swatch to the left shows how it looks after a month just laying outside, and the right one exposed to more for a longer time (it hasn’t shrunken though, it was smaller from the beginning).

On to the new stuff from Yanko, the affordable Spanish brand. We have a new last, W934, which is a more classic round toe service boot last which we have three such make-ups made on. One is of a medium brown pull-up, and then one dark brown and one burgundy chromexcel versions, the popular leather from the American tannery Horween. Goodyear welted on studded Vibram rubber soles. 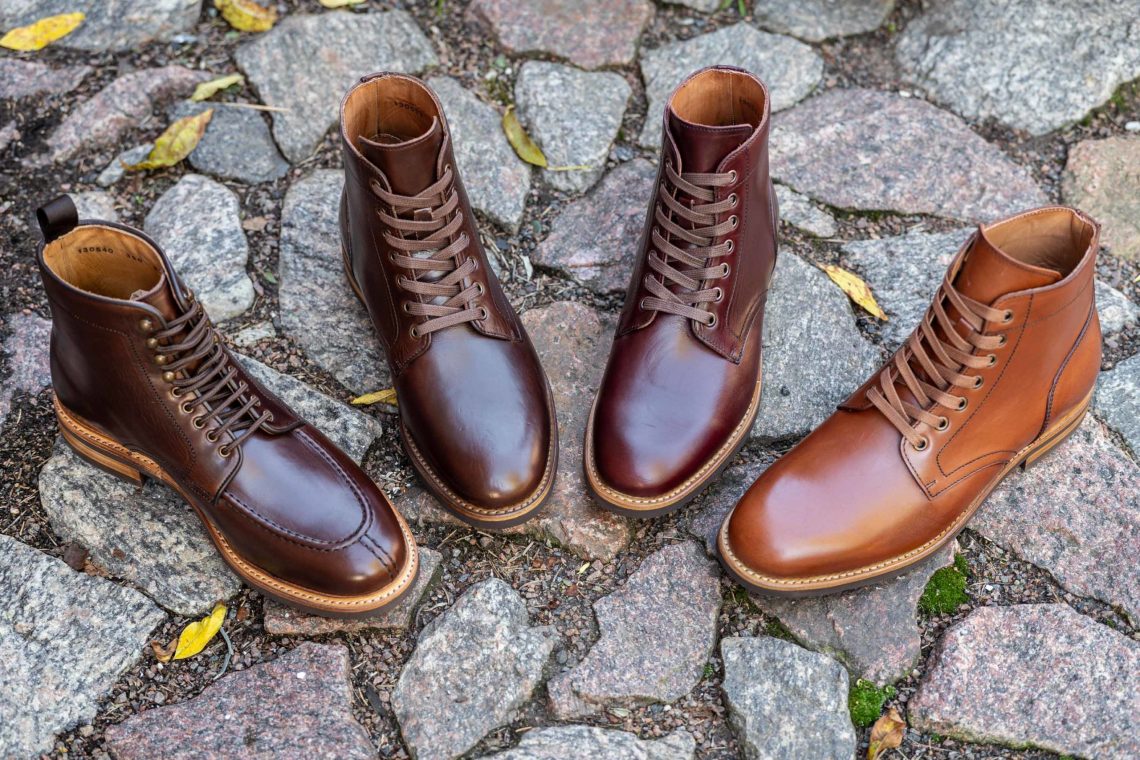 There’s also a dark brown chromexcel version of the NST boot, an excellent allround boot for lots of occasions. We’ve also stocked up on a bunch of the previous workwear boot models from Yanko. Price for the Yanko boots is €300 ($235 excl. VAT), the two Shell cordovan ones are at €500. We now have 17 workwear boot make-ups offered at Skolyx, which is quite decent after one year in this sphere (add to that almost 40 other welted boots, and one got a lot to choose from). 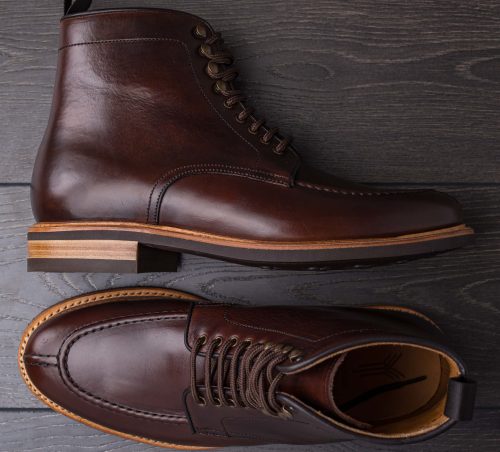