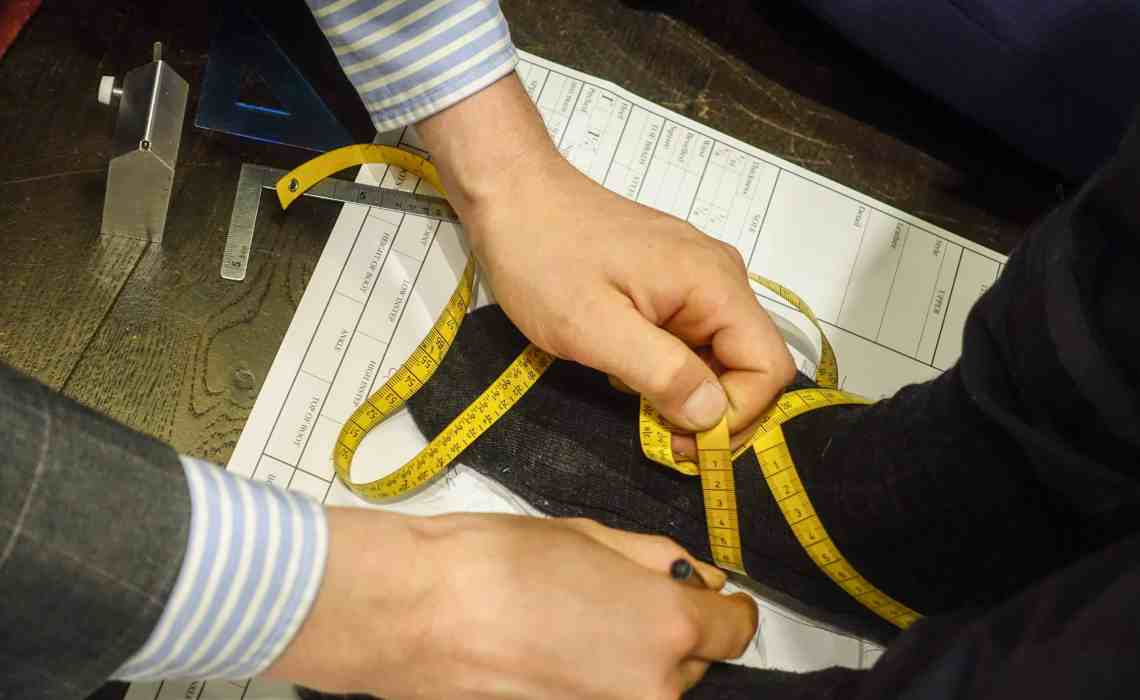 This summer I was in London to get measured for a bespoke order from Gaziano & Girling. In this series of articles you will follow this journey, today the first appointment is covered (already published on the Swedish version of Shoegazing this summer) and later this week you’ll get to see the first fitting which was done about a week ago. 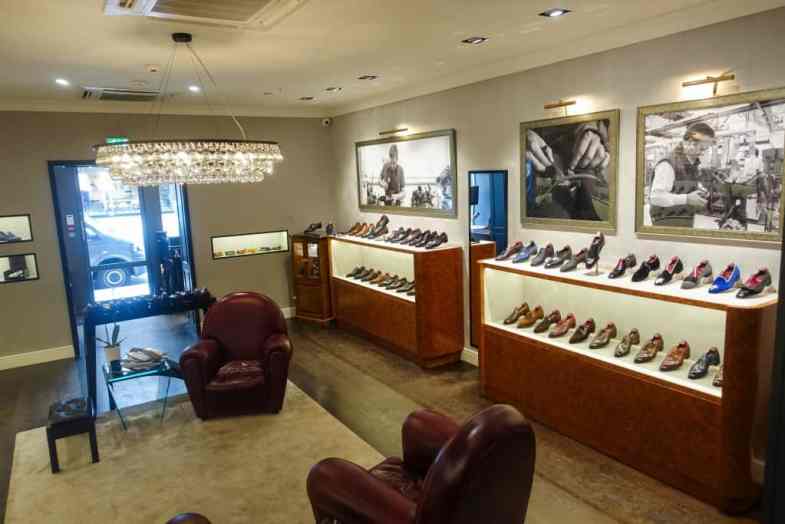 The store on Savile Row, the Mecca of tailoring.

Gaziano & Girling opened its own shop on the venerable street Savile Row in central London last year, where the company’s entire RTW collection is sold, a large number of MTO and bespoke samples are displayed, and where the patina of their MTO and bespokke shoes are made. Here the Swede Daniel Wegan who now leads Gaziano & Girlings bespoke department does a lot of measurement sessions and fittings more or less every week with different customers. 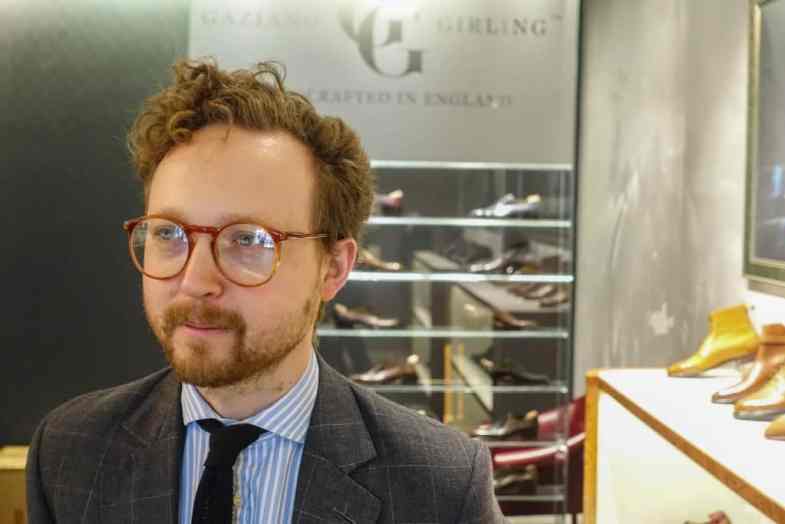 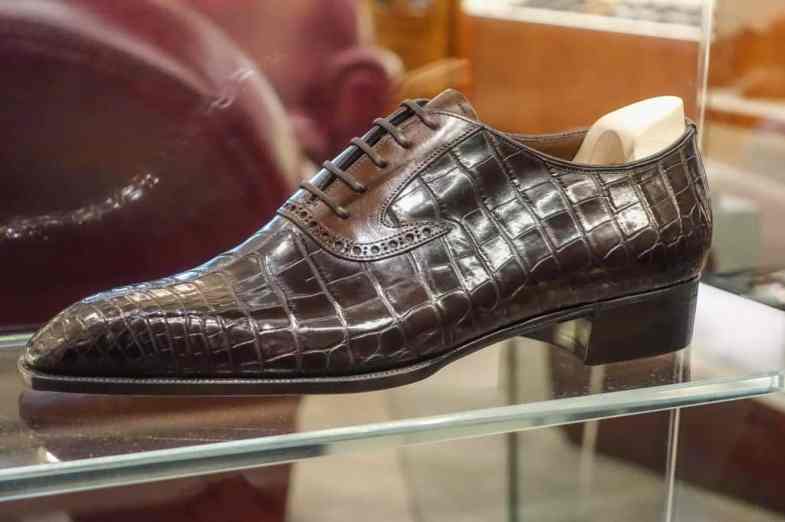 Beautiful bespoke sample oxford in alligator with calf facing, made by Daniel. 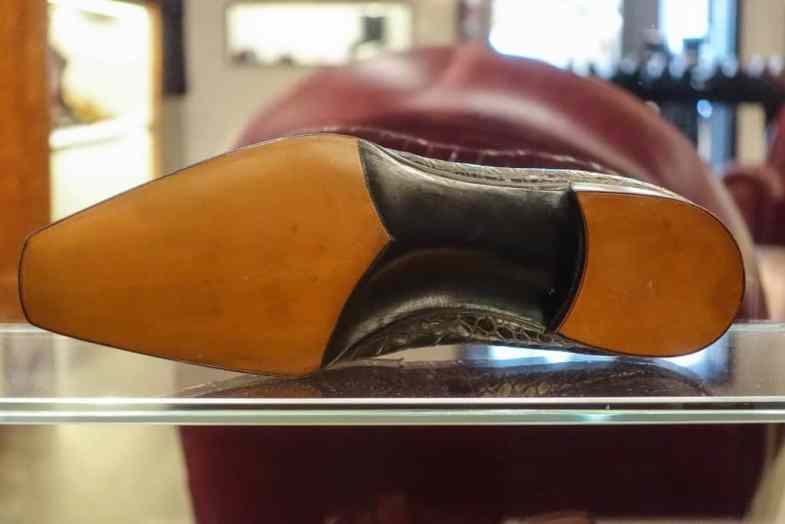 The sole of the shoe above.

Gaziano & Girlings bespoke shoes are ranked as some some of the finest in the world. A few years ago they made a total revamp of the entire bespoke business, cut down on the amount of shoes they manufactured and oversaw who worked for them, and since they have further raised the standard. But quality costs money. A pair of bespoke start at £ 3 950 (€5 500). That includes hollow, handmade shoe trees from the legendary last- and treemaker Hervé Brunelle. The pricing is together with John Lobb Ltd. the most expensive in England (at Lobb’s you may however also pay extra for shoe trees) nowadays.

For many those prices sounds outrages, and there is no doubt that it’s a lot of money. The main reason for the latest price increase was to raise the salaries for those who make their bespoke shoes, which you of course can sympathize with, and apart from that it’s obviously a very time consuming process. It is not just that it takes time to do lasts, test shoes, modify lasts, perhaps new test shoes, new modifications, then the production of the shoes and finish of them, plus the shoe trees. One should also be aware that included in the cost is also all the failures that will occur along the way, maybe not on all pairs but many of them. It can for example be, as mentioned before, that you might have difficulty getting the fit correct and needs to do several test shoes, or that one must discard the shoes along the way during the production for a variety of reasons, sometimes because mistakes are made and the shoes did not manage to keep the level they should, but most commonly is that something goes wrong in with the pattern and closing. This is noticeable only once you last the uppers, and you notice how the pattern is not correct everywhere, it does not close for quite as it should be in some place, or something like that. Then you just discard the otherwise fine leather and start again (of course you always try the pattern with scrap leather first, but it often can turn out wrong anyway since the real leather acts different etc). Daniel says that bespoke department has about as many couples who become rejects along the way as they have finished pairs, which is a bit over a hundred pairs a year. 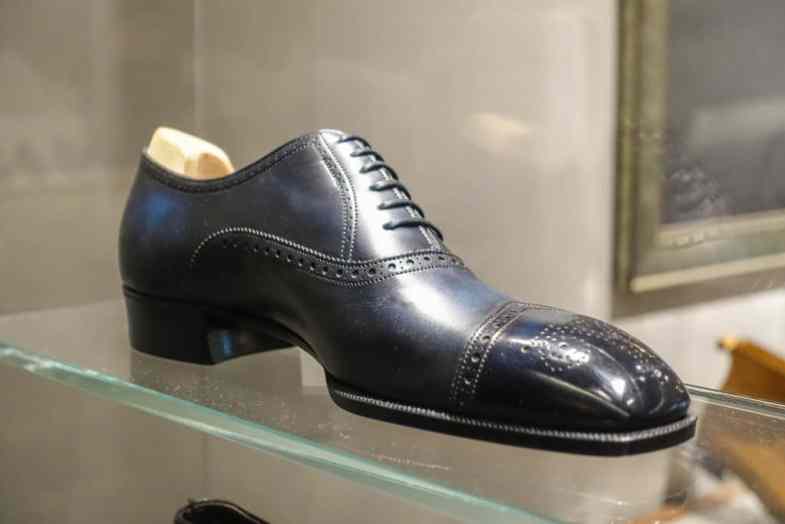 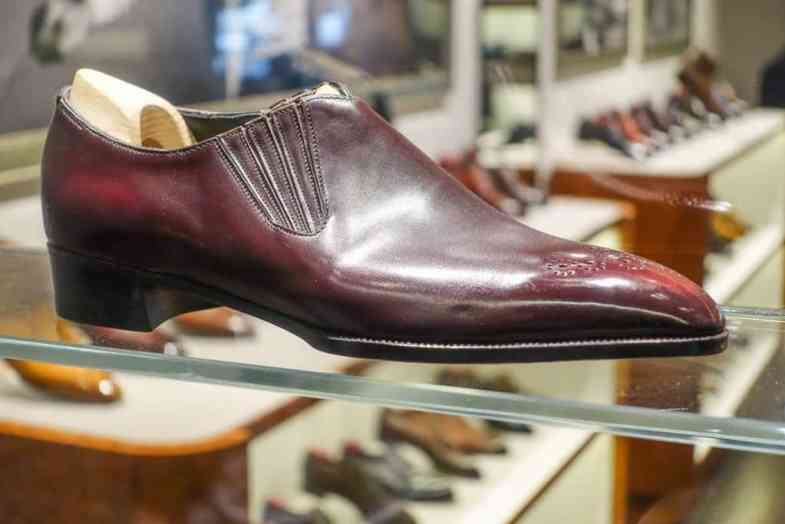 A great lazyman, made by the Japanese Shoji Kawaguchi who runs Marquess, but used to work as a freelancer for G&G. You can see that it’s his shoe cause of the extremely tight cut sole edge and with the welt seam being stitched far out towards the lasts feather edge (edges of the bottom). 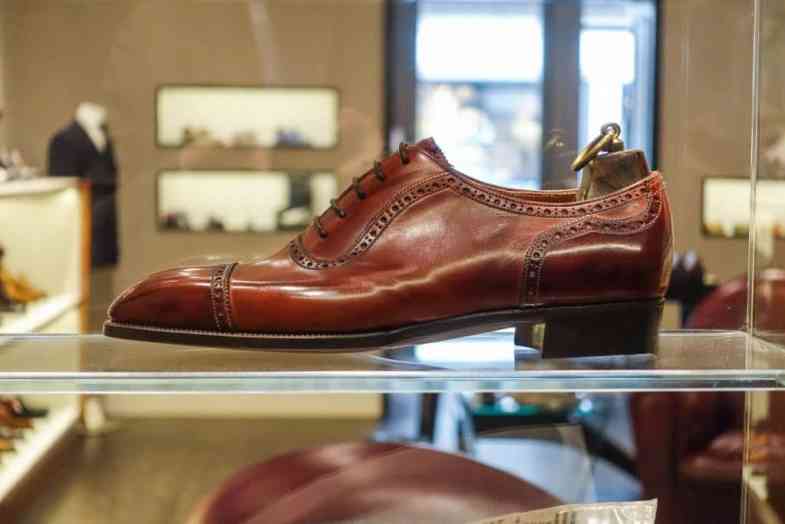 The prequel to the RTW model St. James II. 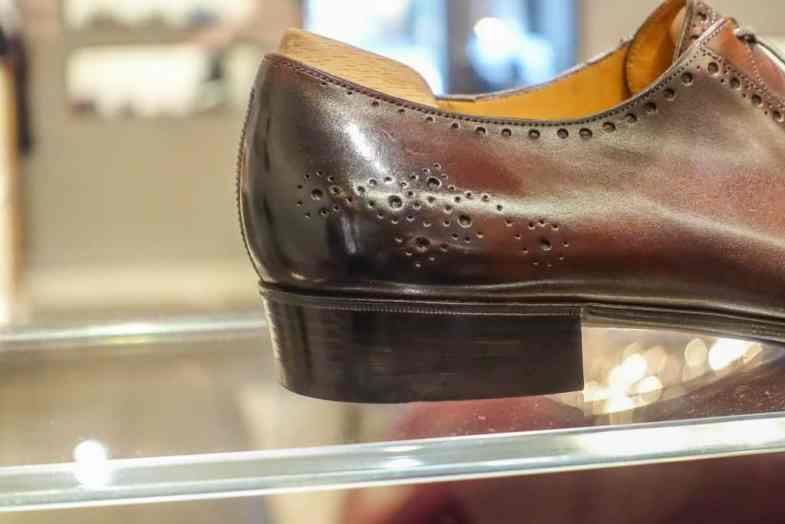 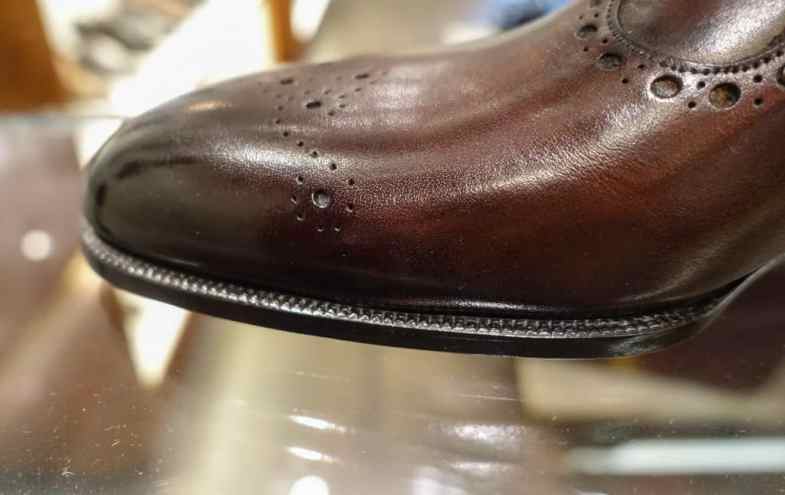 Waist from the side.

Daniel Wegan is as mentioned the head of G&G’s bespoke department, which one must say is fairly impressive given that he joined the company as a complete novice six years ago, and in the beginning mostly had to sweep the floor. His main task is as lastmaker, which then also means that it’s him who usually have contact with customers and take measurements and do the fittings and so on. He also makes some design, plus he devotes evenings and weekends to “extra work” with bottom making at home in his apartment. Daniel has one full time apprentice in his workshop in Kettering, Northamptonshire, where Gaziano & Girling’s factory is located, which so far mainly is doing repairs and test shoes. In addition, another Swede who normally works in a shoe factory goes as an apprentice at part time some evenings and weekends. Tony Gaziano is today almost exclusively doing design jobs, just some single lasts. Closing is made byt three women in the factory who also makes the sewing work for the company’s RTW shoes. These are the ones who work with bespoke at Gaziano & Girling.

In addition to these they use three different freelance workers, who are all makers, which means that they do the bottoming (in short, build them together, from the lasting of the upper to the finish). Those who make shoes regularly for the company is an Englishman who is one of the most reputable freelance makers in England, and a Frenchman who was previously at John Lobb Paris but now freelancing. The third is an Estonian who previously worked for several major bespoke houses in London, but which now only makes more sporadic jobs from home.

Daniel Wegan belongs to the group of lastmakers  who take a lot of measurements and information about the clients feet. He begins by tracing the foot’s outer lines on paper when I stand up. For this he has a kind of pen holder which ensures that the pen is held at 90 ° to the paper and that the line is levelled with the same distance all over. He then takes the outlines on the inside of the feet with an ordinary pencil, and then the arch with a pen held in angle of 45°, and to ensure that the angle is right, he has an angle ruler to help him keep up the pen to before he draws the line.
He will then take probably ten different girth measurements with the measuring tape along the entire foot. Then I get to sit down and he takes all the measurements again without any pressure on the feet. He also does markings and notes for different foot problems and variations that my feet have. With a special drawing tool the outlines of the outside of the foot is drawn. 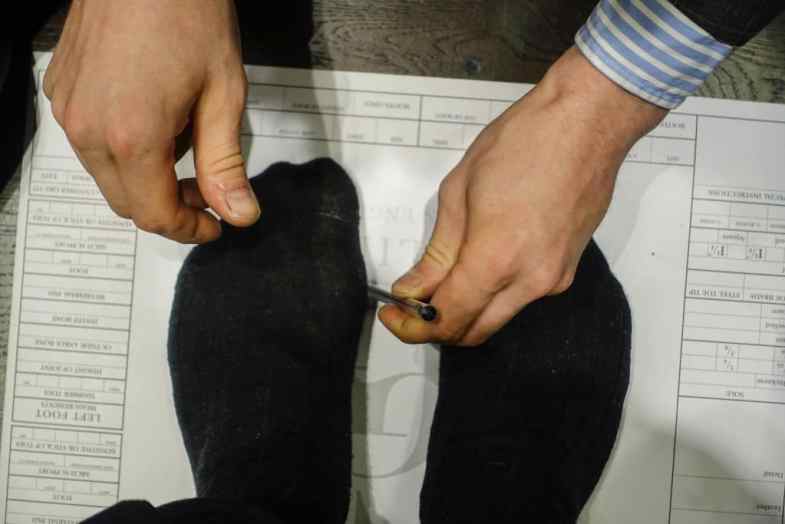 Then he draws on the the inside with a regular pencil. 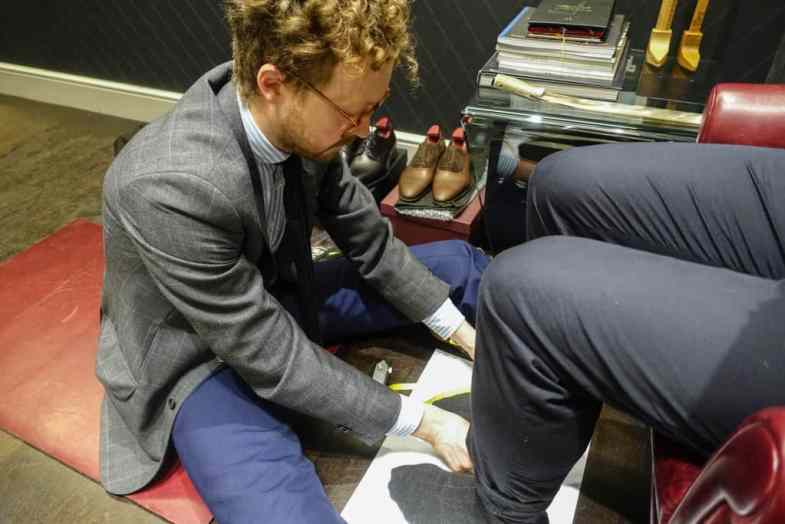 The measurements are taken both while standing up and sitting down.

Something that Daniel also do, that I have not seen before, is that he measures the feets height in several places. With two types of angle rulers he takes the exact height, for example at the big toe and the inner ankle. He also makes, as many do, a so-called profile drawing where he keeps a piece of paper next to the foot and draw the foot’s upper outline with a pencil, but this is less accurate than the ruler measurement in terms of exact height, it’s mostly to see the shape.
We’re not done yet. The next step is that I take off my socks and stand on a special kind of paper with ink to get my footprints. In addition, Daniel brought a form filled with foam that one put down your feet in and you get a three-dimensional shape of the bottom of thefeet. This is kind of premium, nothing that Daniel use all the time, but he wanted to show all the ways he can use to create a picture of the customer’s feet he did this step now. 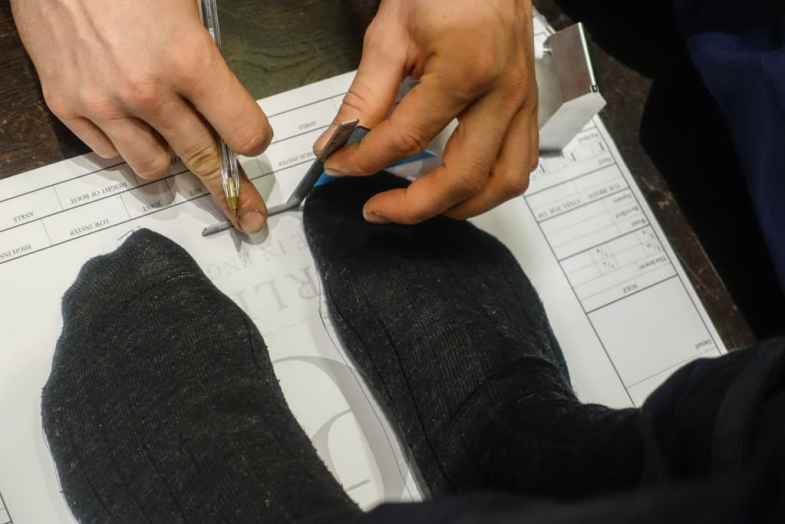 My footprints on ink paper. Here’s the sheet with ink removed and you can see the prints better. Daniel has also drawn the outlines on this. 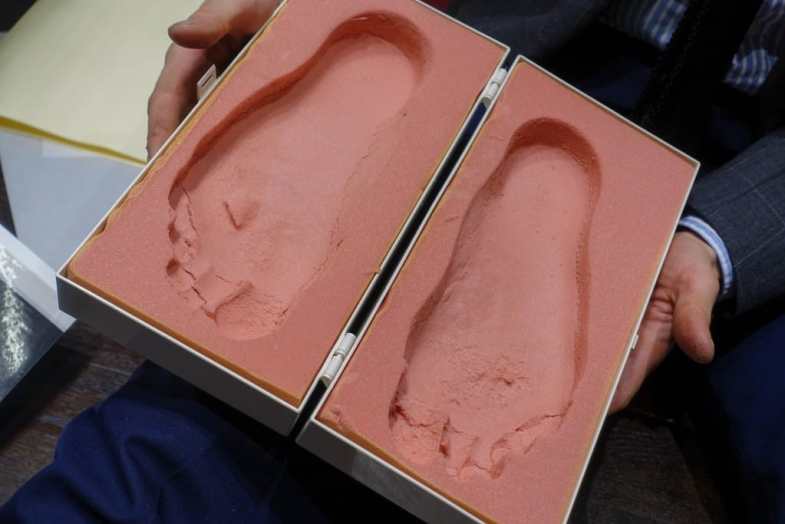 Another version of my footprints, in foam.

Daniel Wegan says that for him it works well to take many measures, then he has things to check against all the time, although a lot of it does not always need to be used. And he is still in an important learning process, he believes that it’s quite possible that he in the future will take less measurements when he’s working.
We talk a bit about 3D scanners and what he thinks of them, and he says that for him it had been a fantastic tool to scan customers’ feet and have two models of them. He would still have to make the most of the things he does today, to just scan of two feet and make lasts that are similar to those do not work, it still requires the same high skills from the lastmaker to get things working good. But having 3D models to be able to go back to and check things with would be very useful, and minimize the risks of major faults on the the final lasts, he believes. The problem is that it is incredibly expensive to have the 3D scanning devices available today. In England it is only Springline who have it, and they are a very large last and shoe tree manufacturer and has completely different possibilities than a small firm like G&G to fund and utilize such a device and software. Daniel hopes that in the future there may be solutions that makes it more accessible, such as 3D printers that are faster and more efficient than current ones. 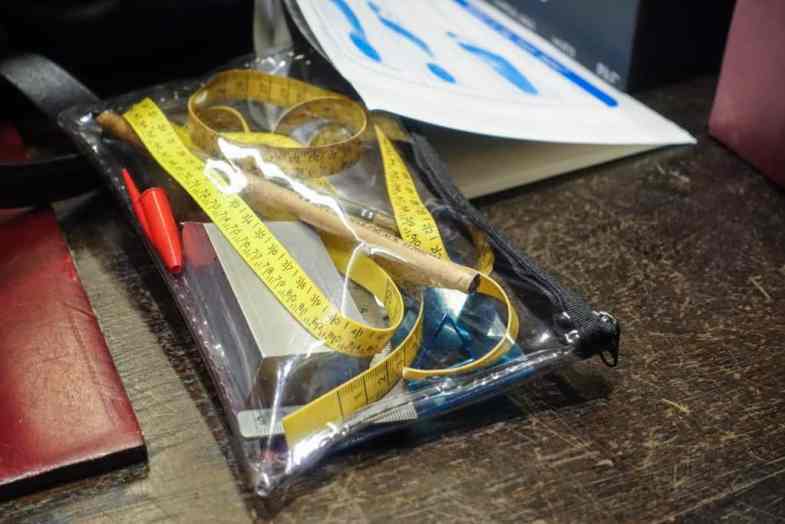 We then discuss the model and the various details of how I want my shoes. In my case, it will be a couple of austerity brogues on a personal version of  Gazian & Girling’s MH71 last. It will likely not look exactly the same given all the considerations that needs to be taken to my feet, but it’s convenient for them to have one of their own lasts as to work from when it comes to shape and look. Daniel will now use a wooden version of the MH71 in the UK10 F-width (which I would otherwise have as RTW) to use as a base last, which he then adds and removes material from to develop my lasts.
The color I will go for is a patina that i s called Wilde Canyon (patina of their artists on Savile Row is included in the bespoke price, if you want it), a medium brown color with a very nice depth. G&G’s austerity brogue Connaught is of course a logical model, but I want them without gimping (notches along the edges of the leather pieces), and with a little different form in the middle section between the wings.
It will be single leather soles of with 1/4 inch in thickness (6-7 mm), toe spring at about 6-7 mm, a narrow bevelled waist with a pretty large build up, and a heel that should be slightly tapered. 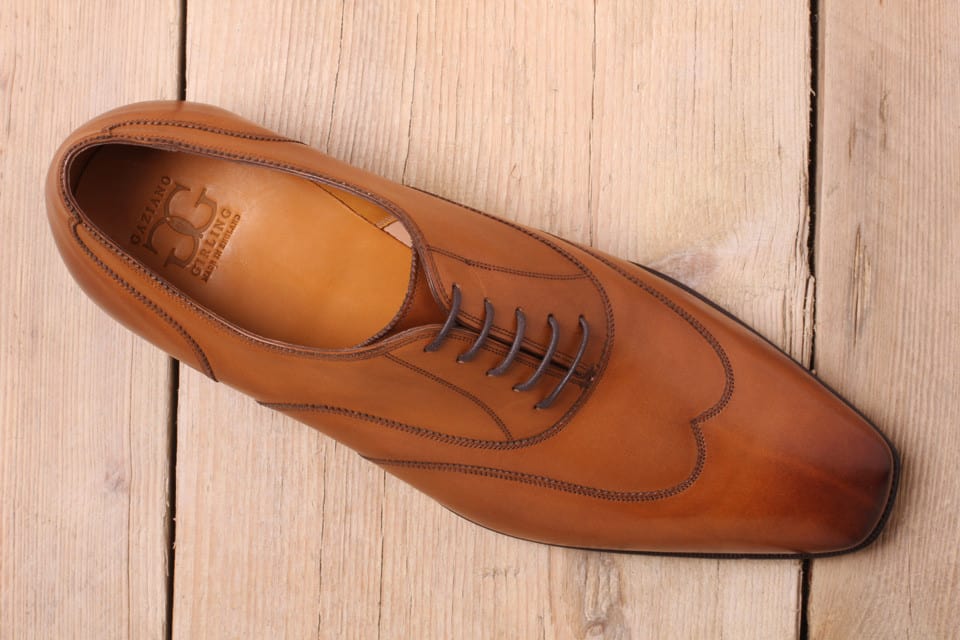 G&G’s RTW model Connaught act as starting reference for my model, but without gimping and a tiny change to the middle of the wings on the vamp. As mentioned this first part of the order was done this summer, and since Daniel Wegan knew that he would visit the Shoegazing Super Trunk Show the past weekend he made a first fitting pair already to this date, which is pretty fast giving G&G. This will be covered in an article next week. After that my pair will go into the standard routine of G&G’s bespoke and the final pair will be ready sometime next year.