So here’s the second part of the series about the making of a pair bespoke shoes from Gaziano & Girling that I’ve ordered. Now it’s about the process since the measuring session, when the first version of the lasts are made, the pattern has been developed and test shoes have been manufactured, which I then tried on at a first fitting.

Daniel Wegan, head of Gaziano & Girling’s bespoke department where he is employed as a last maker but he also do making in the evenings and weekends, began by ordering a MH71 last in UK10 F-width (extra wide, E is the standard at G&G) in wood from their supplier Springline. It is the size I have on the RTW shoes of the company, and although in many ways it does not fit me that well, it is of course logical to begin with it, now that it’s an MH71-shape I want for my shoes. Then Daniel according to the measurements and info he has about my feet removed and added material on the last to correct its fit and do personal lasts for me. As most people know even in full bespoke nowadays it’s very unusual to take a block of wood and start carving out a last from scratch (even if it’s something Daniel also can do and are doing occasionally), but almost always you have a last which you start from, a base last. He then rasp and sand them down where it needs to be removed material, and put on so-called “fitting pieces” where leather is glued to the wood and sanded and shaped where it needs to be built up. All the time you go back and compare to the different measurements, outlines, and so on.

Here’s the base lasts directly from the last factory.

Here Daniel has started to convert the lasts to fit me. If you start from the left you see a roughly cut out leather piece which then is glued in place, on the inside of the other last you have a leather piece already in place which he started to shape, and on the outside of that you have a fitting piece that is finished.

When the first versions of the lasts are finished Gaziano & Girling make a test shoe which to a relatively large extent is similar to the final shoe. The shoe is made in the same model and patterns that the customer has ordered, and they are more or less made to the same standard of construction as all their RTW shoes, with leather heel stiffener, Goodyear welted and so on, but with low quality leather and some cheap rubber soles etc. They see the test shoes as a good opportunity for the company’s bespoke trainees to practice on various components, and it also gives the customer a better idea of ​​the final result if one actually makes a test shoe that is in many respects similar to what is ordered.
The shoes I’m having made for me is a pair of austerity brogues. I had specified some small differences on the middle part of the wing on the vamp than how it is made on  G&G’s RTW model Connaught, and when Daniel worked with this pattern he discussed it with me during the process. A quite amusing exchange of photos and descriptions were sent between us before he got things the way I wanted it.

This is the first version of the front part of the pattern that Daniel made. He had made the middle part a bit elongated compared to Connaught, but hadn’t gotten the curves the way I wanted it.

I sent him this picture with the modification drawn out.

…I corrected him again…

…and finally he got things the way I wanted it to be.

Daniel Wegan was part of the Shoegazing Super Trunk Show last Saturday, and on the Friday before he visited the store Skoaktiebolaget who sell the brand and also acts as agent for Gaziano & Girling in Sweden, and then we took the opportunity to get the fitting done. Daniel says that he is always a bit nervous before a first fitting session, since he has no idea how good or bad he has interpreted the customers feet, the measurements, dimensions, how he likes the fit ans so on. What is clear right away when I put on the test shoes is that they are too tight especially for the pinky toes, where it pinches quite much. Daniel says that he usually makes it a little small here for the first fitting because it’s easier to determine how much you should add, rather than to risk making it to big and then need to assess how much space it is inside the shoe, although this time it might have been a bit too small.

He pinches and feel at different points on the shoes, and draw with a pen in different ways to mark out what to do where. At the same time I tell him how I experience it all, and except that they are too tight in the front they already fit pretty well around the arch and heel, although it needs to be taken in a bit in the arch of the left shoe, and the area just behind the inner ball needs to be trimmed a bit more on both lasts (extra hard this time since I have some hallux valgus problem and it must not press the “bump”). After I’d been wearing the shoes and walked around in them in the store for a while, I also feel that we need to add some small fitting pieces to the heels where I have had some problems with calluses earlier which I obviously want to avoid coming back. Daniel Wegan with some nerves ahead of the first fitting session. 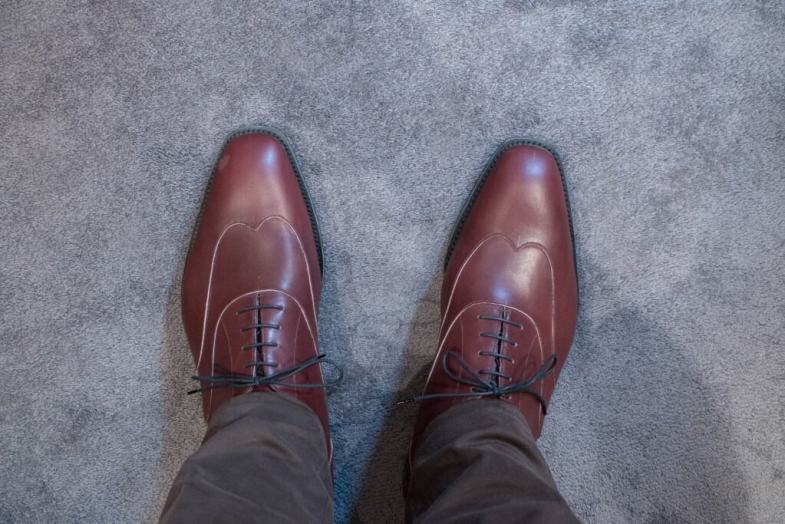 Here you can see that they are snug over the pinky toe area where it pushes out a bit. 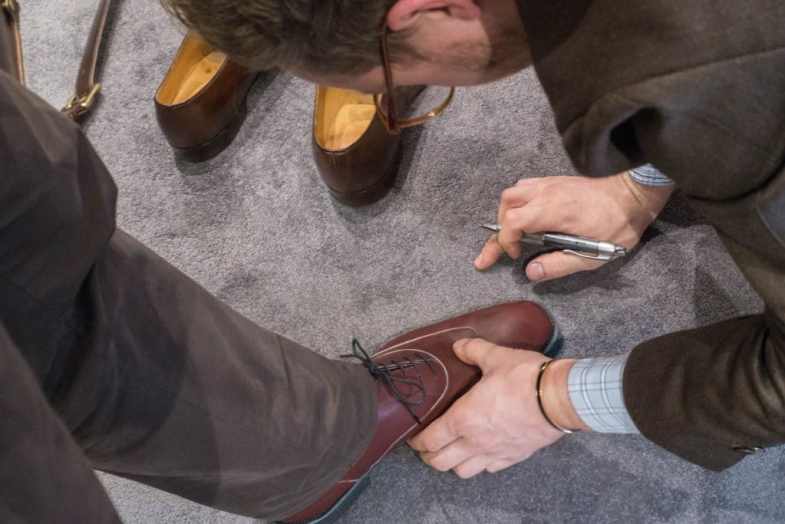 Daniel pinches and feel on your feet to help determine what corrections needs to be made. It uses a shorter heel stiffener, like on RTW, than for finished bespoke shoes to feel and see clearly how they follow the arch, and also to see how the creasing develops. To interpret creases on the test the shoes are part of the procedure to know what corrections needs to be made to the fit. Everything is marked out on the shoes with a pencil.

Then it’s time for the most spectacular moment during the fitting, when Daniel cut up parts of the shoes. As I mentioned in the first post about G&G bespoke Daniel tries to gather as much information as he can on each order, and although not all is used in the production of each pair he learns of it and are slowly but surely getting a larger and broader knowledge base about as many different aspects as possible. To cut holes into the shoes are made to provide an improved image of how the space looks at selected parts. Because when you make bespoke shoes it’s basically about getting as little space as possible everywhere, without them becoming too tight and uncomfortable, to put things short. For example, Daniel noted when he cut up the heels that he could make the backs of the insoles slightly smaller, since there was some unnecessary space there, the heel can of course still be equal only that he moves up the back of the so-called feather edge, the lower edge of the last.

Daniel will now carry out the modifications needed to seriously begin to approach a really good fit. In order to have more space for the little toes, we talked about that he will probably add some also on the inside of the lasts, maybe actually most there, to so to speak move my feet over to that side and have more space at the outside. Then a new pair of test shoes will be made. In almost all cases he does at least two fittings, the first often means that you will find a lot that needs to be corrected, but after the second there will hopefully be just minor things that needs to be changed before the lasts are done and the real shoes are being manufactured. Most likely, he will only send the new test shoes to me so I can assess and provide my opinion of them, plus take pictures, which should be sufficient. Now, however, it will not be as fast between the parts, so the next and final part in this series of articles is likely to be published some time next year. On with the knife. 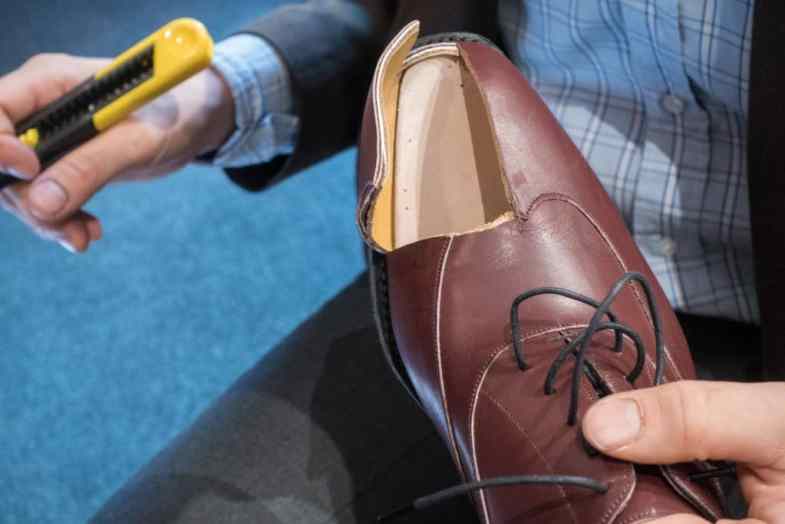 Voilà. As you can see the toe stiffener is made of celastic, which is plastic impregnated fabric. This is basically used on all factory made RTW shoes. It’s the material in the heel stiffeners that differs between price and quality ranges. 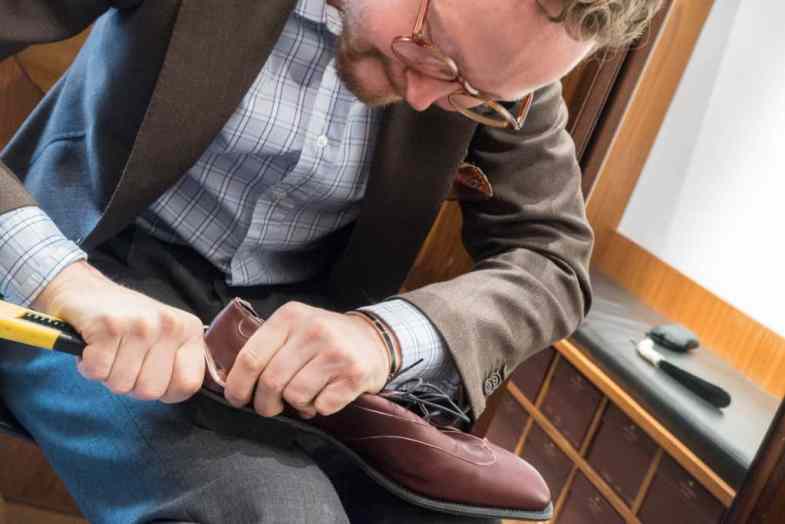 Time to put them on again. Here you can see that the insoles goes a bit too far back at the heels, so that there is unnecessary space. 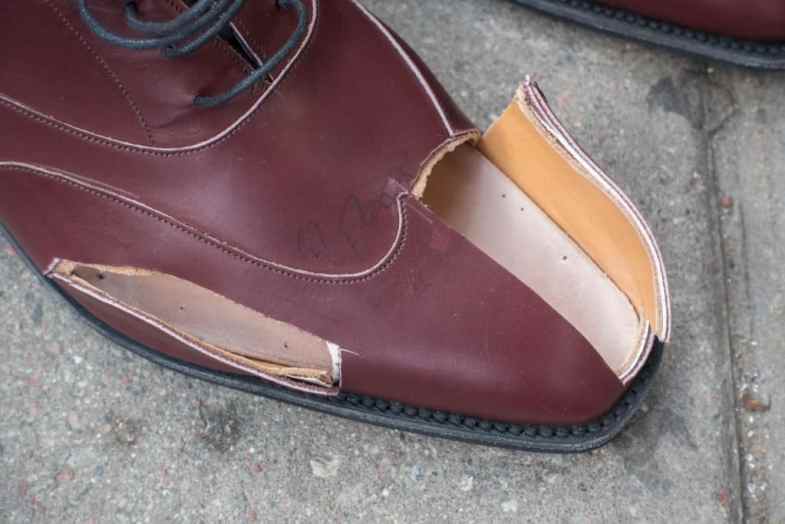 On the finished shoes Daniel Wegan will make reinforcement pieces in leather that goes all the way from the heel- to the toe stiffener, at least on the inside of the shoes. This will then be hollowed out at the outer ball area to give some extra relief for my hallux valgus issues while keeping the look as good as possible. 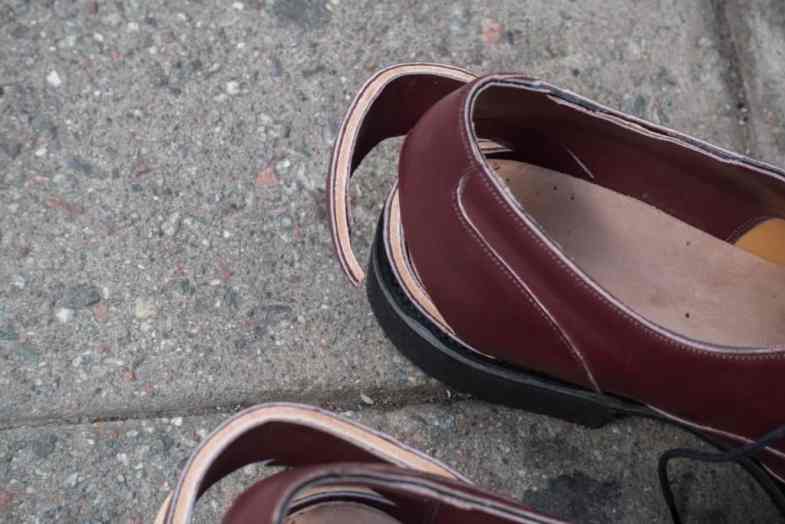 Here you can see the thick leather heel stiffeners.