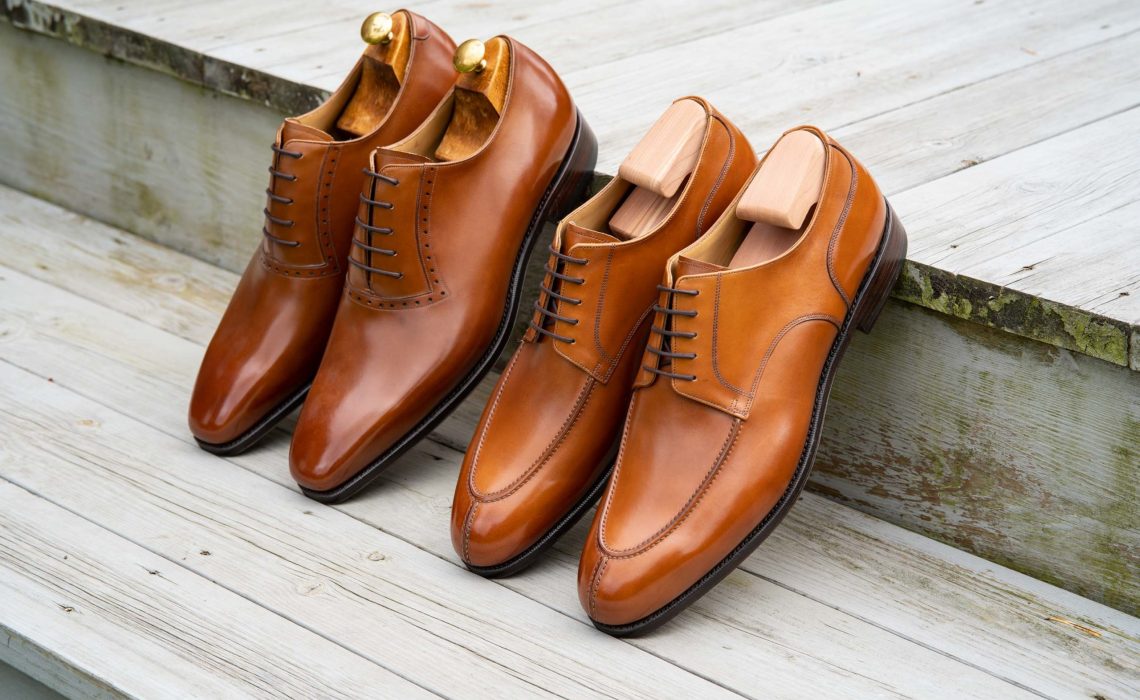 India is a country that we see more and more quality shoe brand appearing from, and one of the most acclaimed ones is Bridlen. Here’s a substantial review of two models from their two main lines of Goodyear welted shoes, to see if they live up to their reputation. 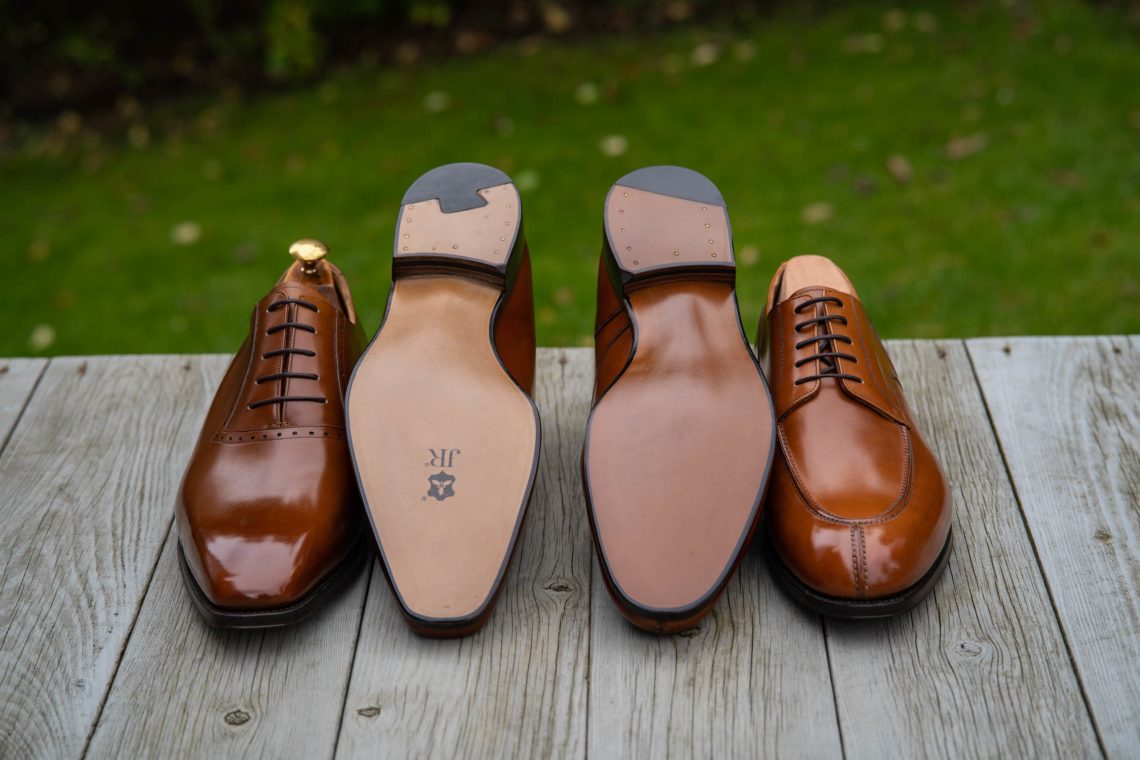 The shoes to be reviewed.

Bridlen Shoes is based in Chennai in the Southeast part of India. It was founded by Hasan Mohamed who had worked his whole life with leather craft and shoemaking, and Jose Maria Watanabe from Japan, who has worked with several Spanish shoe brands and among other things was involved in the start of Meermin. Nowadays it’s run by Hasan’s son Affan Mohamed and his brother-in-law Zahan Anees, with Watanabe still highly involved.

The Bridlen factory, which actual name is Affan Shoes, has three legs to stand on. One is that they produce uppers for other shoe manufacturers, one is that they produce OEM shoes for several brands which are mainly sold in Japan, and final one is their own brand Bridlen. One pro with this setup is that they can order relatively large quantities of materials and be selective in using only the best parts for their Bridlen brand, which is the most premium shoes the company produce. Bridlen’s table at a super trunk with focus on well-made, affordable classics.

Production in India, especially in the South, has taken steps towards making much more premium products than before in recent years (the fact that Apple moves production to India indicates something), and this also goes for the shoe industry. With costs of living and with that wages still being relatively low in an international context, the quality to price ratio can be really good.

Affan Mohammed is in charge of production, and he has a nerdy interest for shoemaking and spends a lot of time testing and perfecting various things. He and Zahan Anees who is more business oriented complement each other. The factory, which is small with Indian standards but large compared to most who are making quality shoes, has about 200 employees.

Learn much more about Bridlen in this podcast episode with Affan Mohamed. Bridlen has a good website with a webshop, where you can find good info about the brands and their products, and then of course buy their entire range. With Bridlen, they don’t work with retailers so only sell directly to customers, mainly through the site and then at trunk shows around India and Europe, where they’ve participated in the super trunk show events in both London, Stockholm and Amsterdam. Boots by Bridlen on display at the Stockholm super trunk show last year.

Bridlen has several different ranges, where the Goodyear welted Main Line and more premium Founders Line are the foundation. Then they also have lighter flexible shoes made with Blake construction or Reverse Goodyear (which is a type of turnshoes), and a small range of extra wide shoes offered in half sizes between UK3 and UK15 (!). Upper leathers comes from European tanneries like Annonay, Charles F. Stead and Mastrotto.

In total they have 150 different styles, with many of them also available with both leather and rubber soles, so their offering is extensive. This is possible since they don’t carry stock, but produce everything made to order, with delivery time of three weeks. Returns are accepted. This is a good business solution, possible much thanks to the fact that they are a shoe factory and have full control over things, and means they can keep costs down and with that prices low. Orders are shipped with internationally with DHL or FedEx, and for orders over $200 (so all welted shoes) there’s free shipping (although depending on where you live, customs charges may apply when they reach your country). Bridlen do uppers more like bespoke makers do it, without canvas backings but with leather backings.

From the Main Line, we have the Y-tip derby model, which is a faux split toe where the apron and toe stitching is decorative in a full piece of leather, with a groove in them to give the look of separate pieces. This is why Bridlen call it a Y-tip derby, instead of the more recognised name split toe derby, so kudos to not trying to mislead (like some do calling reverse stitch toe derbys split toe derbys etc.). It’s made on the round toe last Rui, has a single leather sole and is made with Annonay Vegano crust calf leather in a light brown shade. 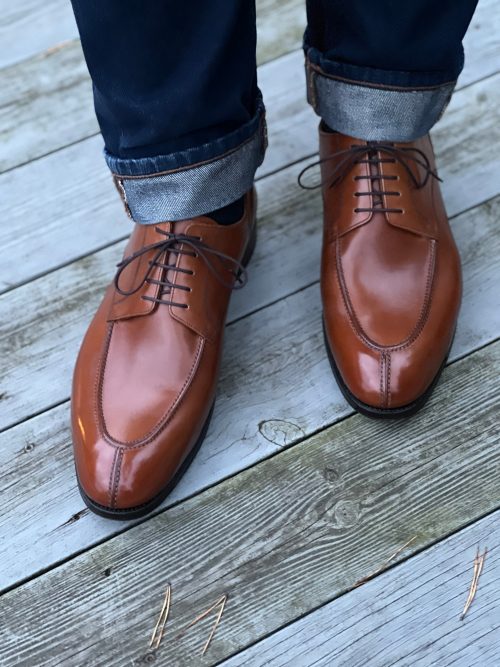 The Y-tip derby (yes, you can picture the toe and apron seams creating a Y).

The adelaide model is called Melbourne, and is also made of Annonay leather, here Vocalou box calf. This is part of the finer Founders Line, which has a more worked waist and oak bark tanned leather soles. It’s made on the elongated soft square toe last Deus. Bridlen’s shoes are delivered in standard blue shoe box with two shoe bags. 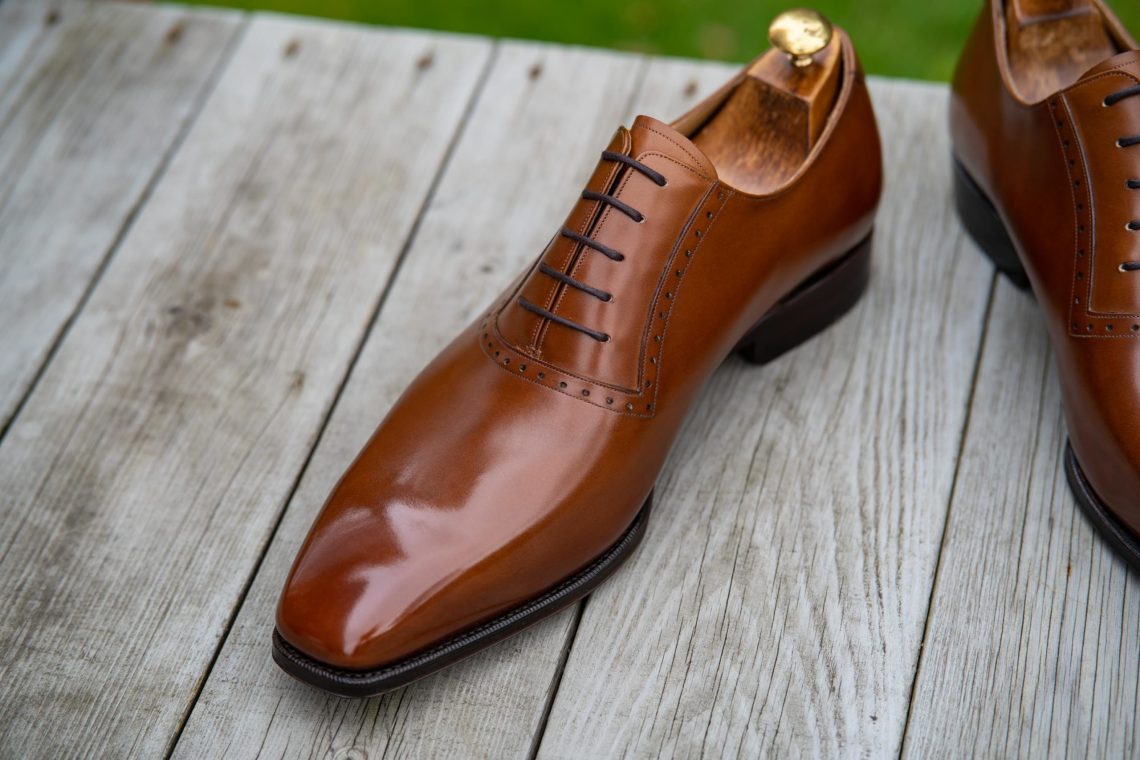 Most things are similar between the two ranges, so I start with going through all the main things that goes for both pairs, and comment on the differences after this. First worth noting is that Bridlen do a couple of things differently to most other makers of factory-made Goodyear welted shoes. Instead of using the standard gemming, where a canvas rib is cemented to the insole, Bridlen has a thicker insole which a holdfast is carved into. This is similar to how Goodyear welted shoes were made back in the days, and both mean that you’ll use a thicker, higher quality insole, and that the welt stitch is done directly to the insole instead of to a fabric part attached with cement. The end result is also more compact, more similar to hand welted shoes, without the large cavity that the gemming create.

Secondly, they do the uppers in a different way than most factories. Standard is to use fabric backings which are cemented in between the upper leather and lining leather, to help the upper to retain the shape and also reduce creasing. Bridlen have a technique they call 3D upper making, where the sort of pre-shape the upper parts on the lasts before bringing them over to the sewing machine and attaching the upper parts. This means that they can skip the fabric backing, instead they use smaller leather backing pieces similar to how bespoke shoes are made, and it will still hold the shape well. Top view of the two models. 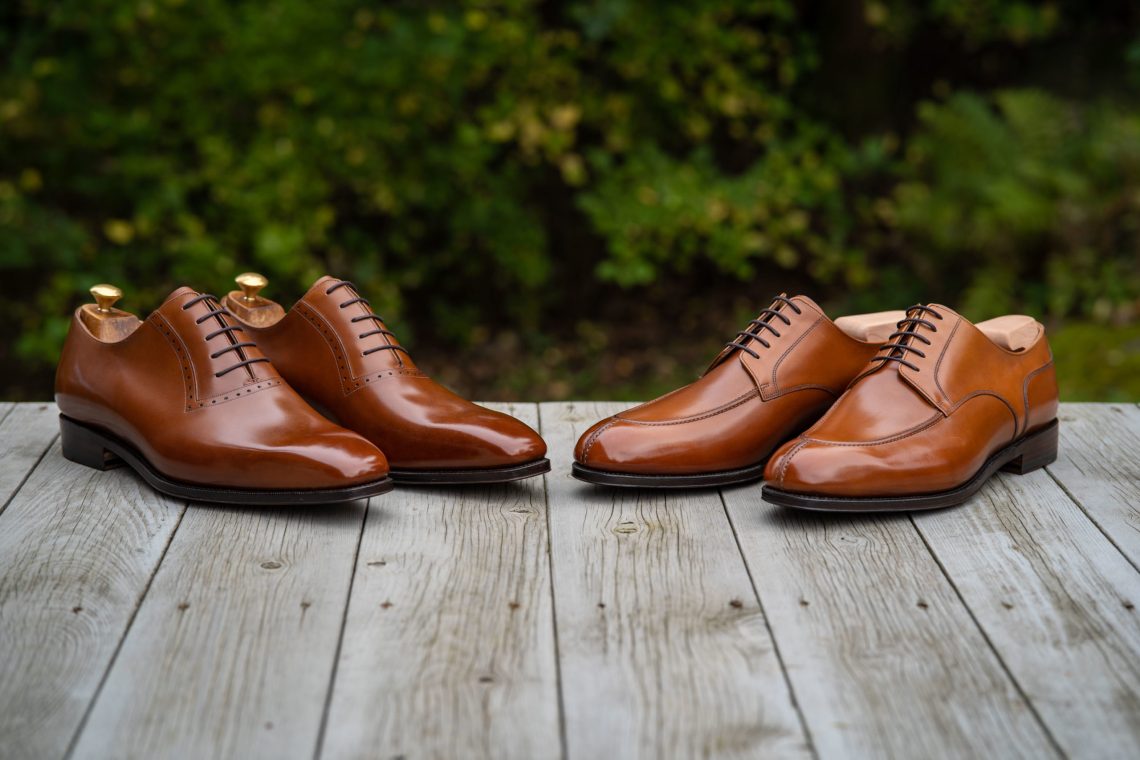 Both are made of light brown Annonay leathers, Vocalou box calf to the left, Vegano crust to the right.

The rest of the making and finishing of Bridlen’s shoes aren’t too advanced, but the execution is excellent for this price range. Very clean. Heels are straight, welts have fudging, outside waist is square inside slightly bevelled and slight roundness on the bottom of the waist. Soles have closed channels and are very neatly finished.

Only have two real critiques. One is that they cut the sole edges very close, I assume it is to achieve a neat look but has a con of making resoles more complicated, especially second one and forth where one likely would need to exchange the welt since you would have needed to sand away too much of it. Another is the pattern of the Y-tip, which makes the toe seam looks crooked. I think this would look better if it followed the line of the lacing and medial line of the last more. 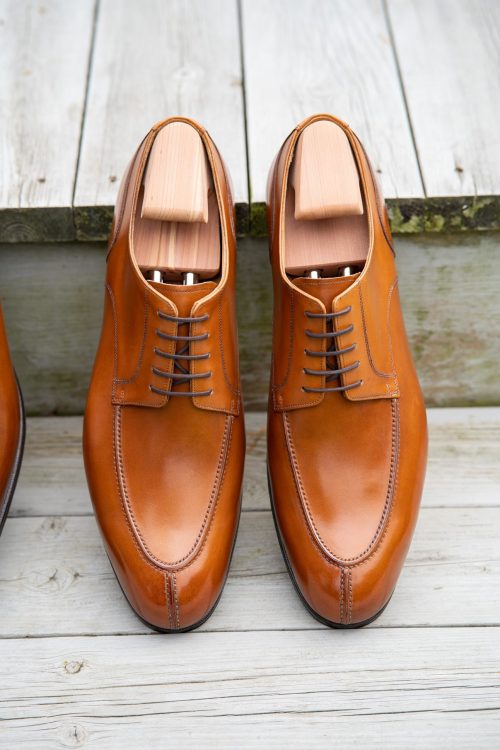 The toe seam looks a bit off. 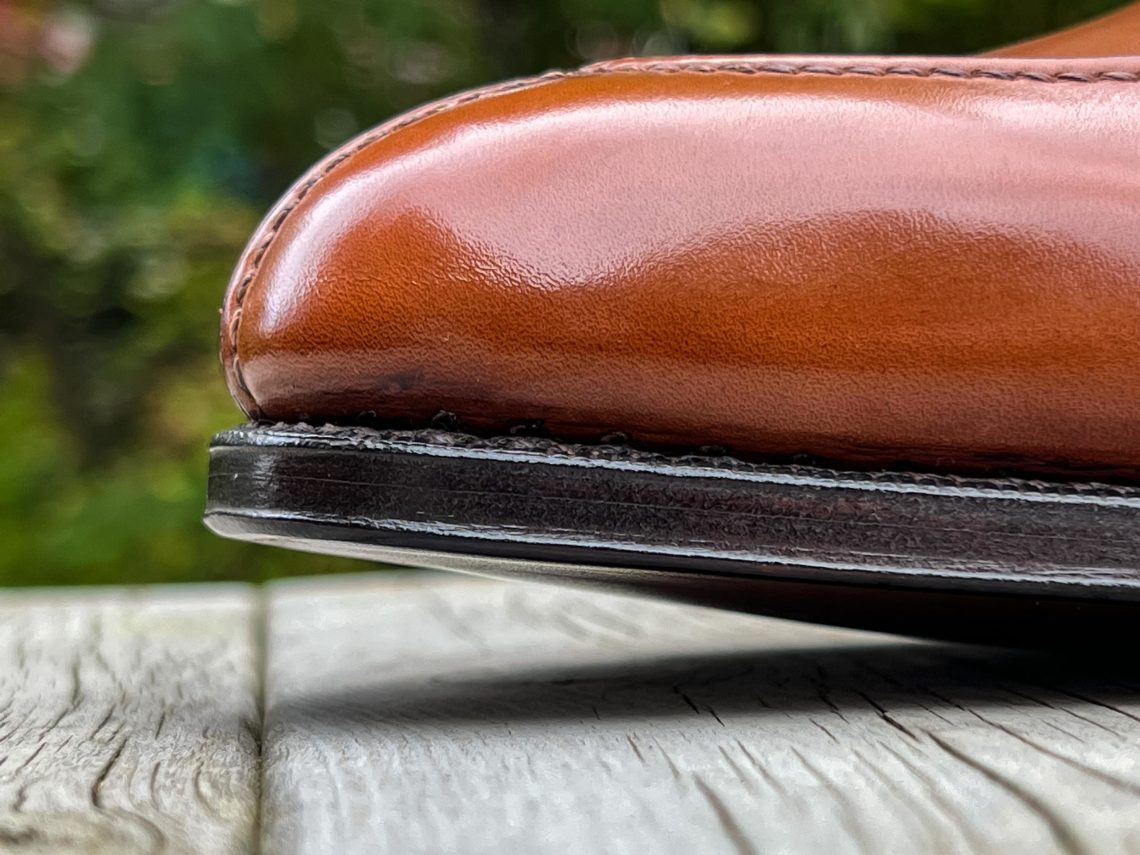 The sole edge is cut close, a bit too close in my opinion. 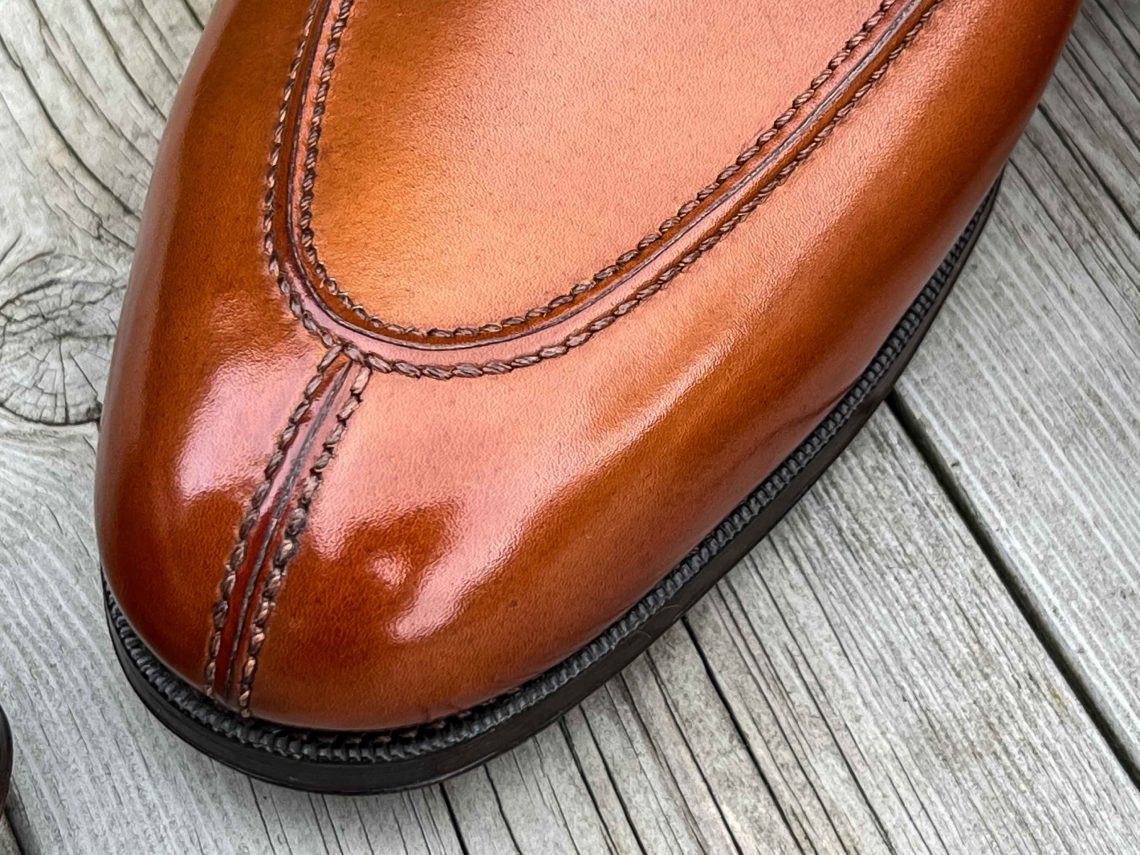 The toe and apron seams are decorateive, with a piping to raise the lake and with a groove in the middle. 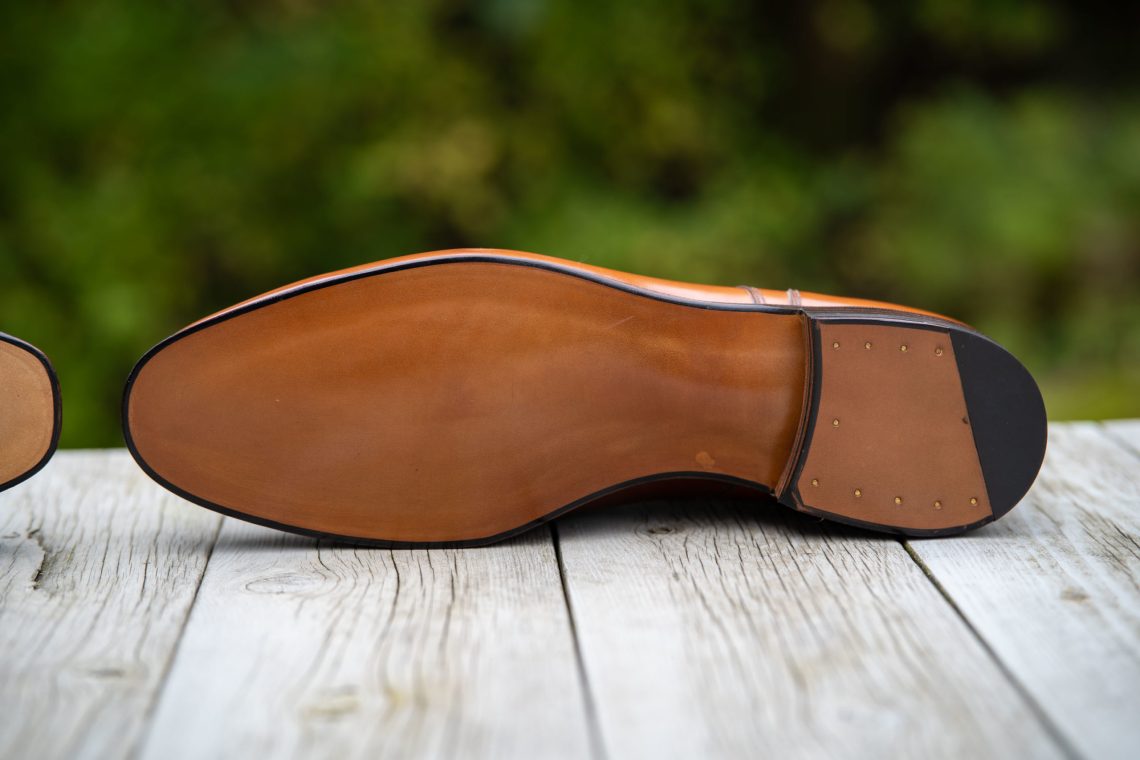 The thing that stands out the most on Bridlen’s shoes is the very high quality of the upper leather for the price. This goes for both pairs here. As mentioned above, the way they run the business means they can select really good parts of good hides for the Bridlen shoes, and this shows. I actually had to ask Bridlen if the pairs I received where representative for their shoes, since I was surprised of the high level, and they confirmed it was. Now I’ve also seen many other pairs from them at the super trunk show events they’ve taken part of, and of customers, and this indeed seem correct. Here they punch way above the competition in their price range for sure.

The premium range Founders Line has more aggressive last shapes and a slightly sharper cut inside waist, and they also have oak bark tanned leather soles. On my pair it’s J. Rendenbach soles, after they closed they announced they were closing the tannery and uncertainties of what would happen there Bridlen switched to J&FJ Baker insoles instead, which are of the same quality.

I recommend browsing their website to learn more about how they make their shoes, they have good explanations in texts and images and also films, without the often exaggerating words one words one often see. 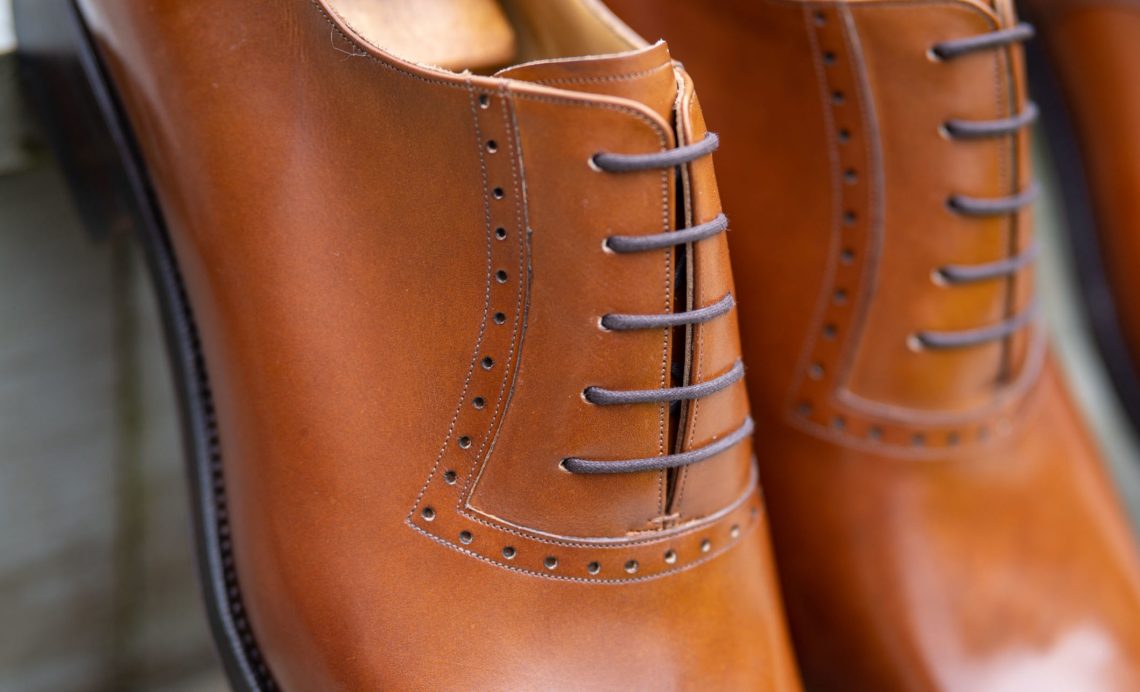 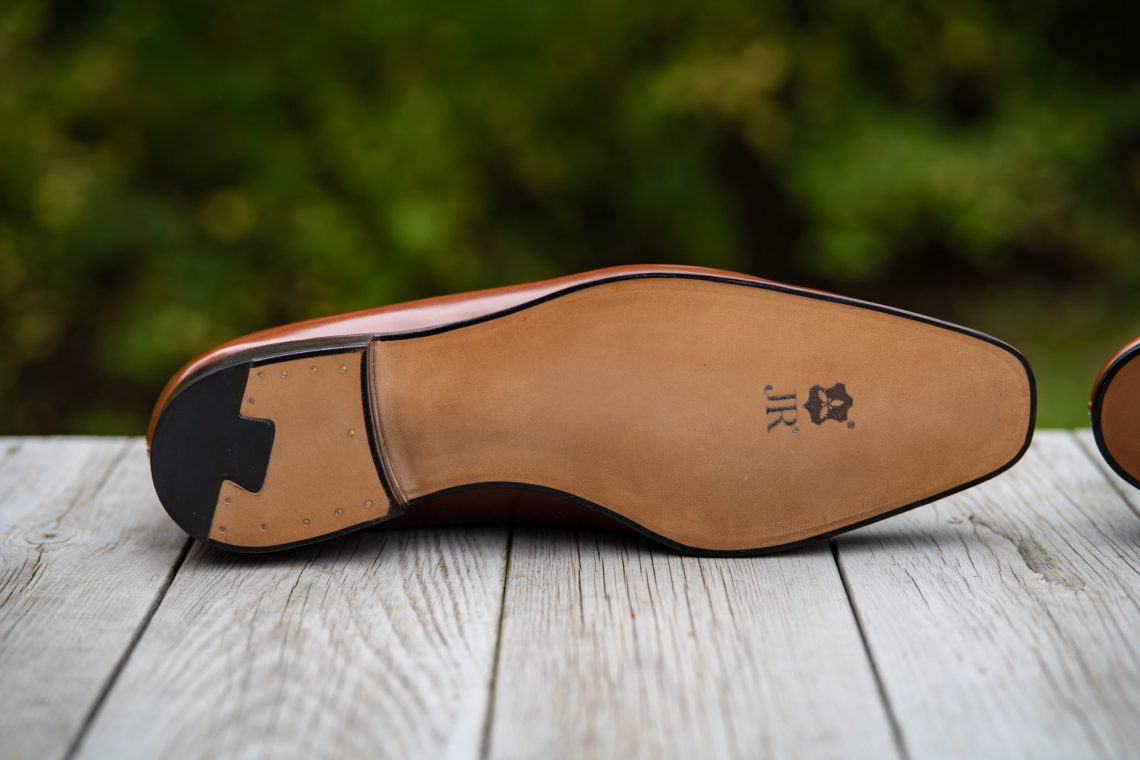 In both shoes I wear my regular RTW size, UK11. I have slightly wide feet, these work better in the Y-tip derby made on the slightly banana shaped, round toed Rui last. This actually fit me really well straight out of the box, which is rather rare for RTW. The adelaide on the Deus last has less room for my pinky toes, despite being rather elongated. For regular feet I would assume this is no issue, but for me they work less good due to this. I also think the Deus last is a bit less well-balanced than Rui, for my personal taste it’s a bit too long and with a bit too high toe spring for this type of style.

Arch support is good on both shoes, of other Goodyear welted RTW it’s mainly TLB Mallorca’s Artista I get the same feeling of. They break in nicely with the Y-tip derby that fits me best becomes really comfortable, these I’ve worn maybe ten times to date, and are a good casual style. The leather board heel stiffener conforms nicely to the feet, and the upper leather softens well and creases very finely. Comfortable stuff. This is after a number of wears, showing how fine the leather creases.

Bridlen in a way do things differently to many other Asian brands that offers much shoes for the price. Instead of having an instant appearance that makes them look like shoes that are way more expensive than they are, here they look more basic at first glance, it’s high value is more hidden, with the way they stitch the welt directly to thick insoles, how they make the uppers, the clean make and the excellent leather quality. For all shoe lovers who aren’t that much after bells and whistles but want shoes that will last long and look great along the way, Bridlen surely is a brand one should take a closer look at. 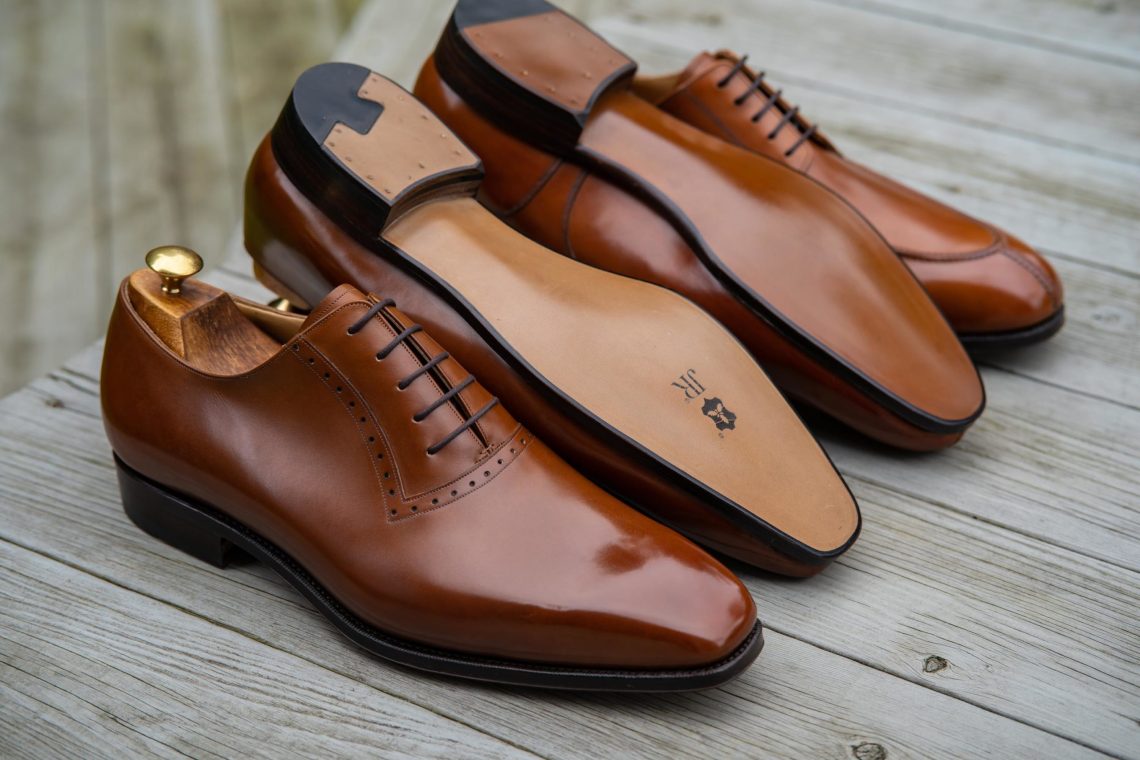 Finish off with a bunch of photos of the two pairs. 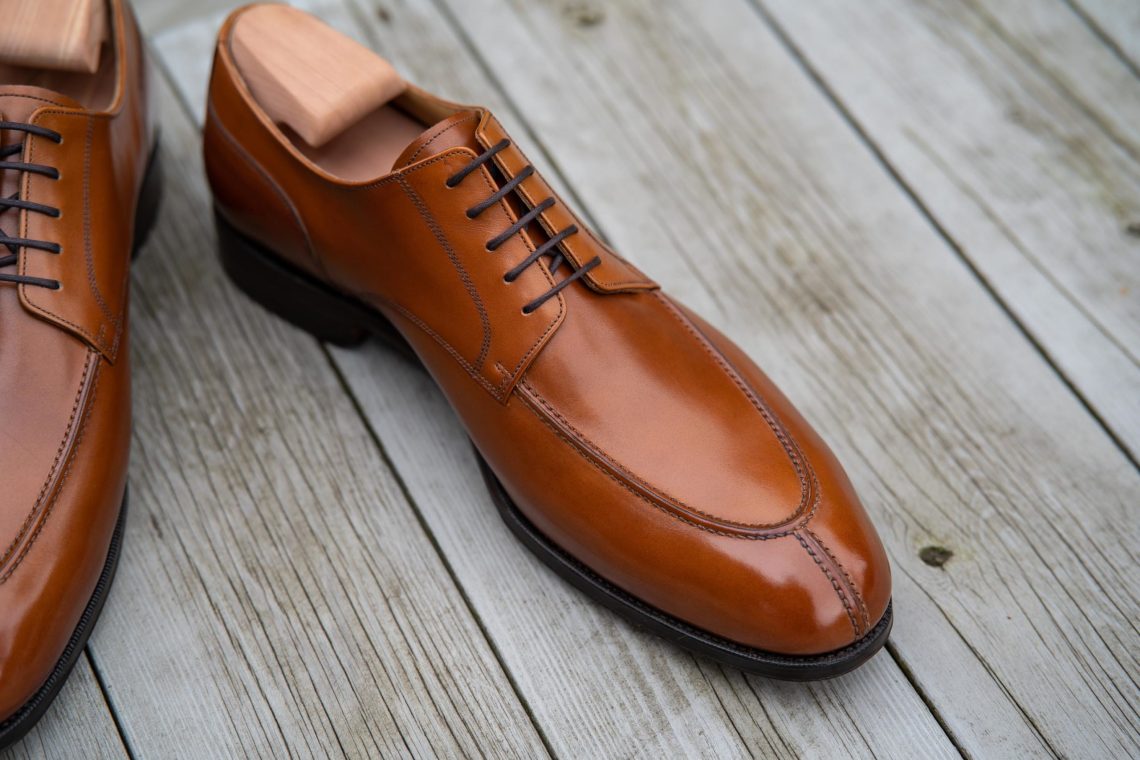 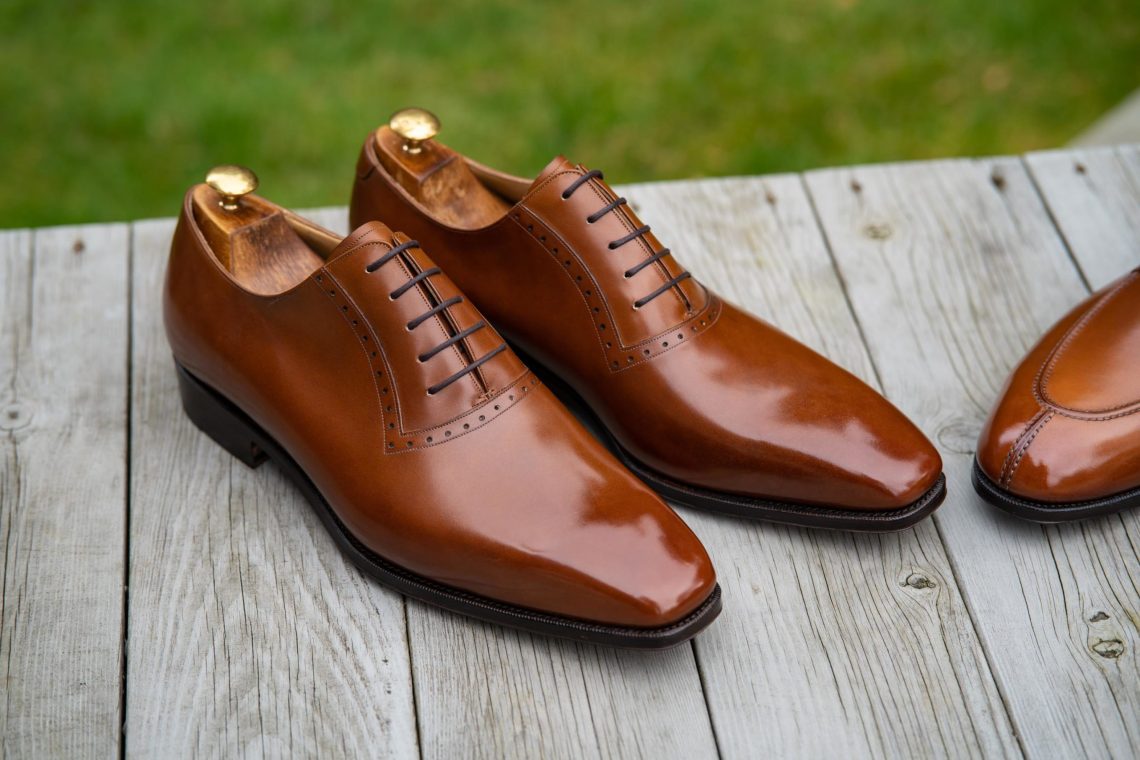 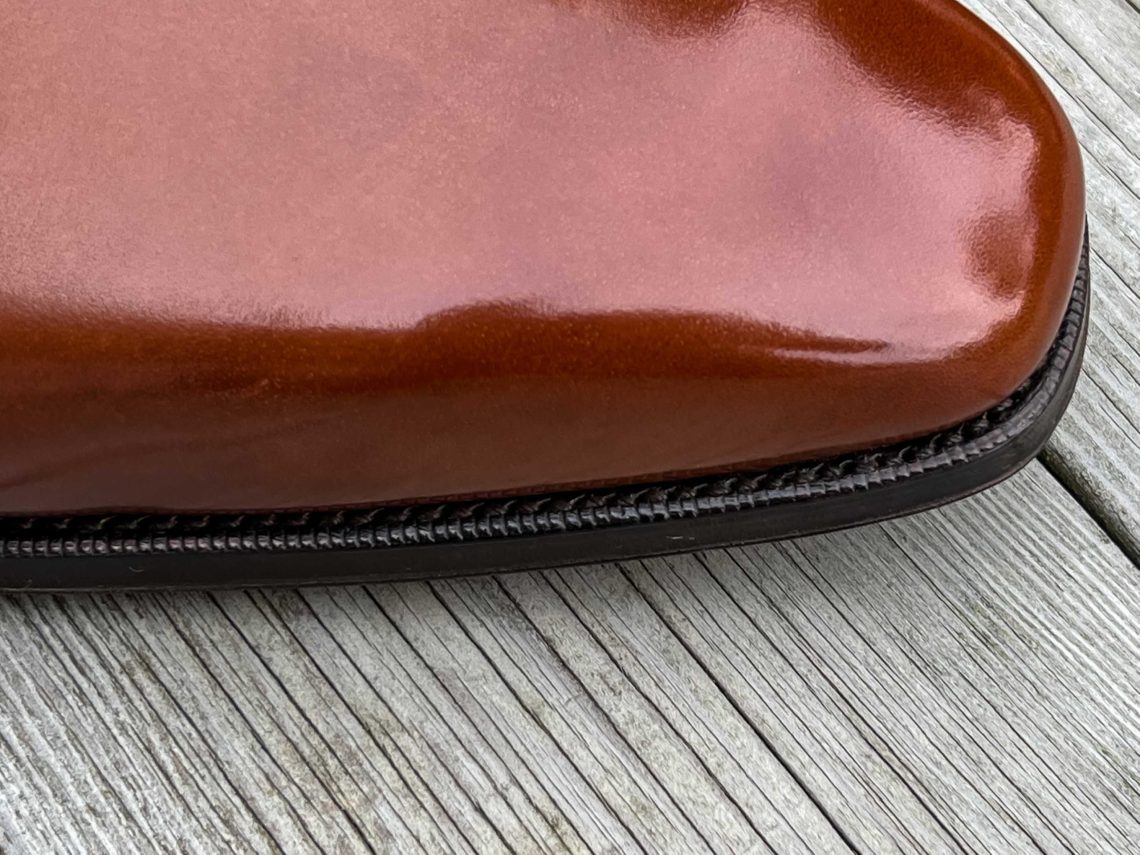 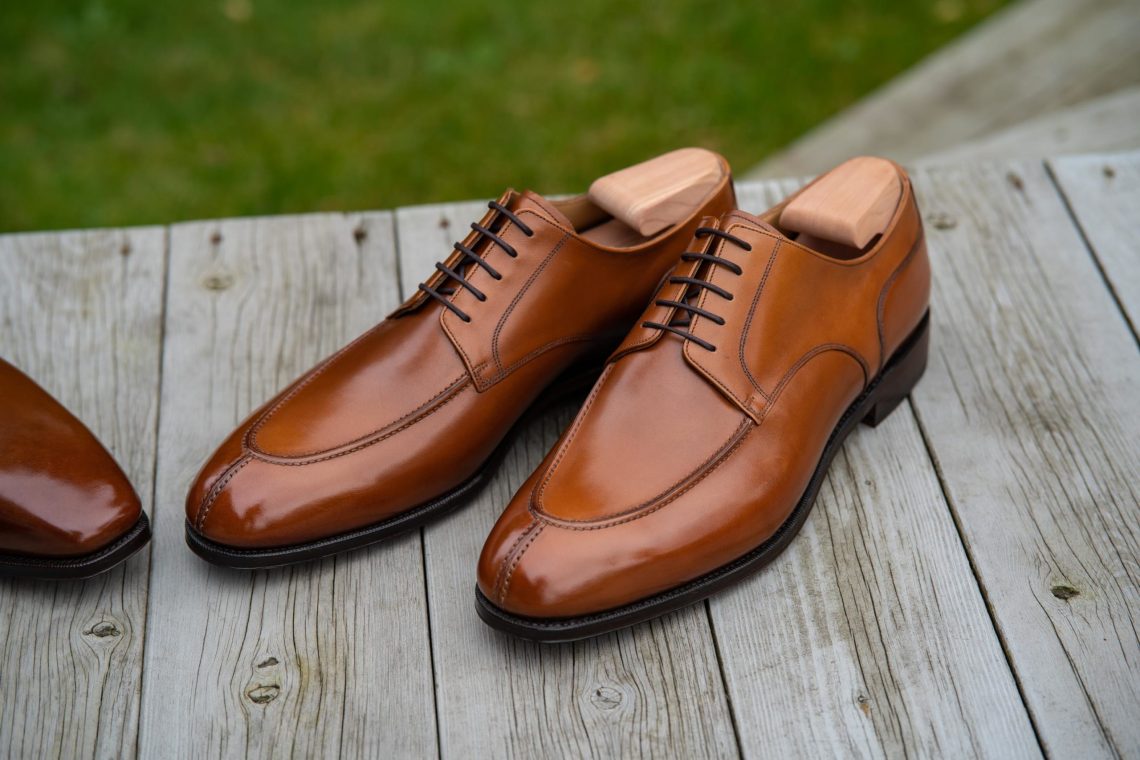 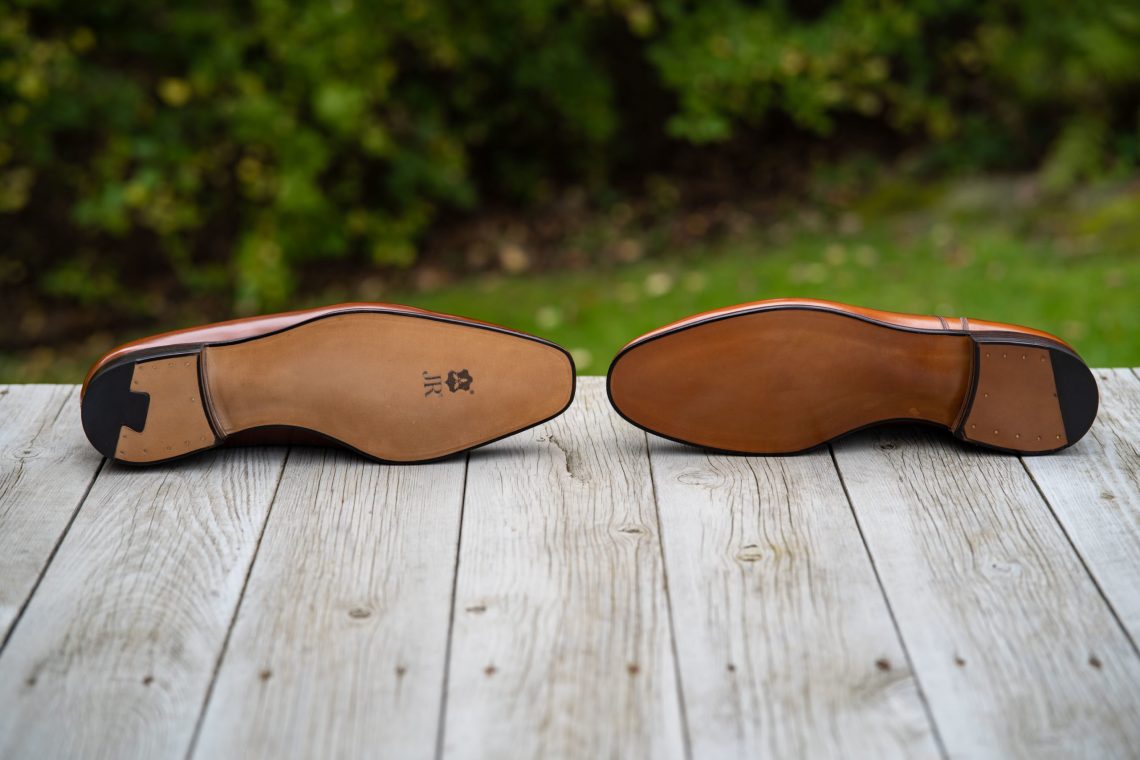