Time again for an insight into the work of the Swedish-Italian shoe brand Italigente. Today more about the cooperation with the Sweden National Football Team who wears Italigente’s shoes to their suit outfit now under Euro 2016, a look at how the new models that you readers provided input on looks in its final form, and a closer look at the new thin rubber sole.

The shoes for the Swedish national team

Last time the Sweden National Football Team were qualifified for a big championship in Poland and Ukraine four years ago Italigente also delivered shoes for them. Then it was the light brown model Venezia Castagna who sat on the players’ feet and a matching belt around their waists, but the journey to have them there was not without problems. The week before the agreed delivery there was an earthquake in Modena, and the roof of the factory that made the buckles of the belt collapsed. So there we stood with the shoes, but without belts. Luckily the factory quickly got back on its feet and could make new buckles. But time was short. And sending belts retrospectively to Ukraine is no logistical treat. After some long days and late nights all belts were made ready on June 5, departure to Kiev was planned for June 6 after lunch with the Swedish Football Association’s (SvFF) own plane from Bromma. Since June 6 is the National Day in Sweden and public Holiday, there was no opportunity to send the belts by UPS or DHL. Magnus Ericson, the founder of Italigente and current CEO of Skofabriken Kavat who owns the brand today, had promised the national team that the belts would be delivered on time, so he met up Alessandro Zoni in Italy late in the evening on June 5, flew himself up to the Scandic Park in Stockholm, and delivered 56 belts in a sports bag. Players had already put on their suits, pulled on the matching belt, stepped out of the hotel and onto the bus for departure to Bromma. A side note but similar story with delivery drama was before the royal wedding between the Swedish Crown Princess Victoria and Prince Daniel in June 19, 2010, where the Royal Court had ordered 14 pairs of shoes from Italigente. Three days before the wedding they called from the Royal Court and wondered where the shoes were… They were supposed to be delivered the week before, so things became quite nervous. After some research it was discovered that the shoes had been standing at the UPS storage center in Marche because of a wrong barcode. Magnus Ericson had to make a personal pledge that the shoes would be delivered at Drottningholm’s castle before 14:00 June 17, the day after. How it would be sorted was not crystal clear. It ended with one of the employees from the factory in Marche flew up with the shoes in a bag. Magnus borrowed shoe boxes from one of Italigente’s retailers, met up the factory worker at the airport, and in the parking lot they packed the shoes in each box, labeled them, packed them into the car and drove out to Drottningholm. At 13 o’clock after been searched thoroughly by the Royal guwards, they passed the barrier and drove into the castle courtyard where eunuchs Tony Carlzon met up and received the shoes. All breathed a sigh of relief and the celebrations could begin. Today Italigente’s patent shoe Prince is sold under the brand Oscar Jacobson. Prince Carl-Philip to the left and Prince Daniel to the right during the latter’s wedding day, both wearing patent leather shoes from Italigente. Picture: Peter Segemark, Nordiska museet

The reason why the Swedish Football Association has shoes from Italigente is named Marcus Allback. The Players Coach of the National Team has a big style and clothing interest. For suits they are sponsored by the Swedish brand Cavaliere, but on the shoe side they have no partner in the same way. So, before Euro 2012 Marcus contacted Magnus Ericson and inquired about the possibility to buy shoes from them. They were pleased back then, not least sthe fact that Italigente’s shoes are quite soft and comfortable right from the start was appreciated by the players and their expensively insured feet. It was reported that during a championship at the end of the 90’s they had been forced to cut off the heel of the dress shoes when it was apparent that several players had sore feet. So from the management of SvFF they now make sure that the shoes will not affect the players’ feet. Some of the players have since 2012 also continued to buy shoes from Italigente, which is a good rating. They therefore came back this year when the team once again had qualified for a championship and needed to have dress shoes to all players and staff. Italigente is not a sponsor of the team, the company is way too small to be able to afford that, so they buy the shoes of us, though at a discounted price. Since we are not a sponsor, we can not avail ourselves of the SvFF logo and can’t use players and so on in marketing in the same way that the sponsors can. This year we chose in consultation with Marcus Allbäck the dark brown version of the same model as last time, the popular Venezia Caffe, a dark brown wholecut with medallion on the soft chiseled 29 last. We also developed a belt in dark brown leather with the Parma-based company Giorgi Zoni, and delivered dark blue socks from Bresciani. Venezia Caffe and the matching belt.

Altogether there were about 50 cpairs of Venezia Caffe that SvFF ordered, and for a while we had  to together with some shoe interested guys here in Gothenburg polish up a proper spit shine on all shoes, and take an epic picture of all 50 pairs of identical high shined shoes. Since our production with the Marini family in Montegranaro is relatively limited, it was tight enough deliver the shoes on time this time too, so we never had time to do any shining operation. Maybe next time. An article on the Swedish menswear site Manolo about the Sweden National Football Team’s dress outfit, with three of the players dressed up. Picture: Manolo

You who read these earlier Italigente Uncovered posts have been eligible to vote and provide input on what models we would do with Italigente. Two of the favorites that we chose to go ahead with were launched a few weeks ago. One of them is a new version of our split toe derby, named Biella II Mogano. New designs from its predecessor with whole quarters, and now on the new classic round 15 last in a hand-painted brown shade, and with our own developed city-rubber sole (more about this below). As you may have read, there was little challenge to get to the sole as we wanted it, but now the model is finally here, and well received. As more retailers than expected took it in, and it has already sold some online, it’s already empty in some sizes, but some are still available, and we expect a restock in August. 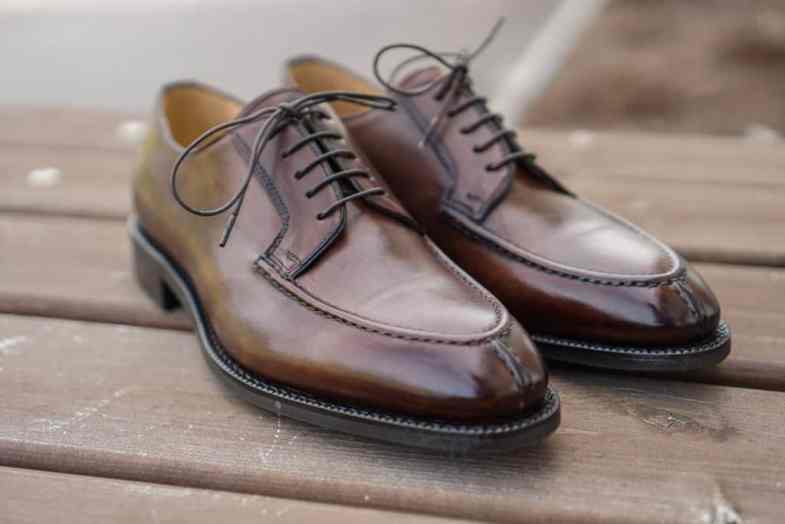 The other new model is a completely new model, an adelaide called Bari Cammello in medium brown suede from the Italian tannery Opera. Also here there were some challenges to get  the pattern the way we wanted it, the recent sample-shoe that you saw was if you remember having a vamp that was too short, but finally we got it. It is made in the same rlast 15 as the Biella, but with a single chestnut tanned leather sole from Italian Volpi, closed channel and bevelled waist. It feels nice to have a suede shoe in Italigente’s range again, something that has been requested. We have also taken back last year’s estimated summer visitor, the espadrilles Riccione in blue and off-white. A really comfortable summer shoe, which is a more well-made espadrilles than the standard ones are, this has an insole made entirely of leather, reinforced toe and heel, naturally dyed stretch fabric and natural rubber sole, which means that they will last more than just a summer. Then there was also the idea that there would be two Bologna-sewn penny loafers launched this this summer. Here, however, we unfortunately encountered some problems when to get the Bologna construction exactly the way we wanted it, and when the time became scarce, we chose to put it on hold for this year. The plan instead is to make it for next summer. Things like this can happen, you must adapt.

Today Italigente use two different sole types, our chestnut tanned leather soles who are really durable, somewhere in between a standard leather sole and oak bark tanned soles from for example J. Rendenbach or Baker, and studded rubber soles (similar to Dainite soles). We wanted to add a new type of sole in between these, a thin rubber sole which looks exactly like a leather sole, but is better in wet conditions. These soles are often called city soles, examples of them are Wensum or the R1 sole used by Edward Green. 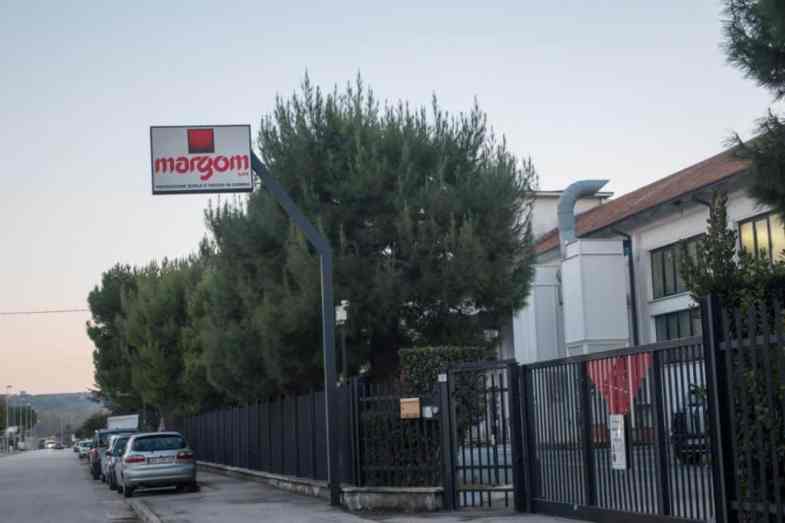 Some of the hundreds of different rubber soles they offer. The right one in this pic is the one we went with finally, although with a modified thickness.

Together with the rubber sole manufacturer Margom, based in Civitanova Marche a short drive from Montegranaro where Italigente’s shoes are made. We looked at a bunch of different soles, and after discussions with Margom we went with a sole with a little bit of texture and a rubber that is a great compromise between hard wearing and good grip. The sole they had was 5 mm thick, we wanted it at 4 mm so this has now been made exclusively for Italigente. The same material is used for the bottom heel piece.