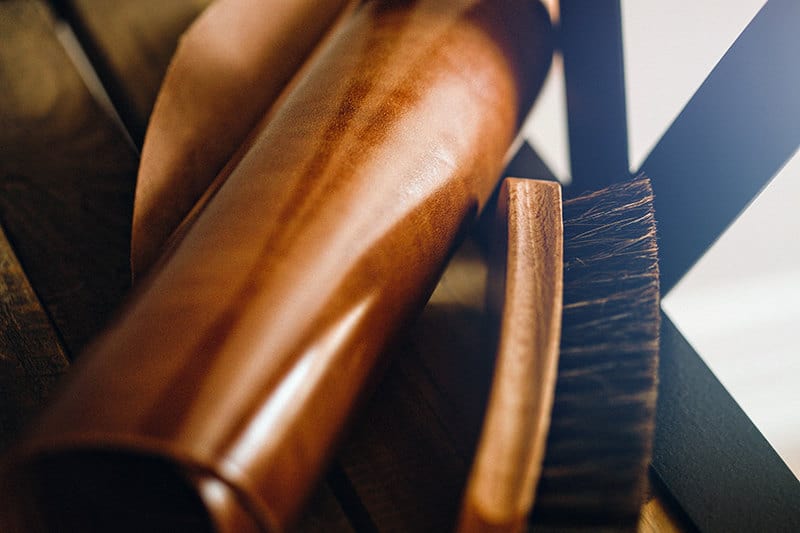 The demand for cordovan leather is very high today, and when the world’s leading cordovan tannery Horween in many cases have long delivery times more and more manufacturers look to other tanneries working with the leather type. One of them are Shell Cordovan, named after the product they are specialized in, based in the Tuscany, Italy.

Shell Cordovan is a family owned business that has existed since the 80s, in the small community of Santa Croce which houses many different kinds of tanneries. It’s ideally located along the river Arno about halfway towards the Ligurian Sea from Florence.
– The environment is extremely important for a tannery, it would probably not be possible to move Shell Cordovan elsewhere. The water, the air, the bark from the forests around here, it’s all important ingredients for the end result, Maxim Bobrikov says, International Sales Manager at the company.
Shell Cordovan has always exclusively worked with horsehides, with the main focus being on cordovan, but also other kinds of leather like avancorpo (sometimes called horse front) from the horse’s back and culatta who also is from the horse’s rump, but the outer grain part. As I’ve written earlier here on the blog one thing that is special about shell cordovan is that it’s essentially a muscle, the membrane below the outer grain portion of the skin, giving it its special character. 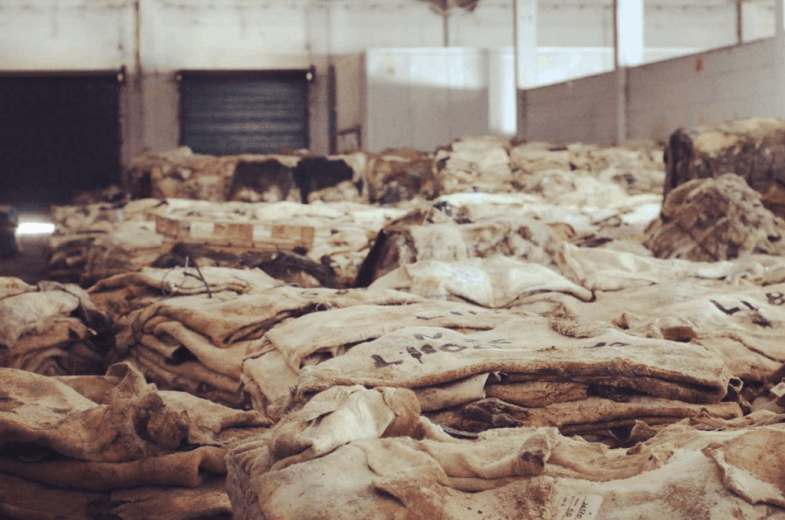 Raw horse hides ready to start the treatment to become cordovan and avancorpo. 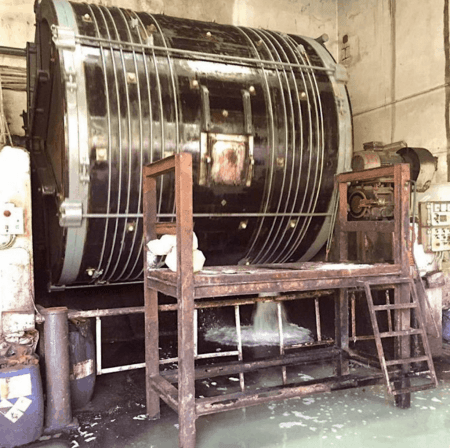 One of the drums in the tannery. 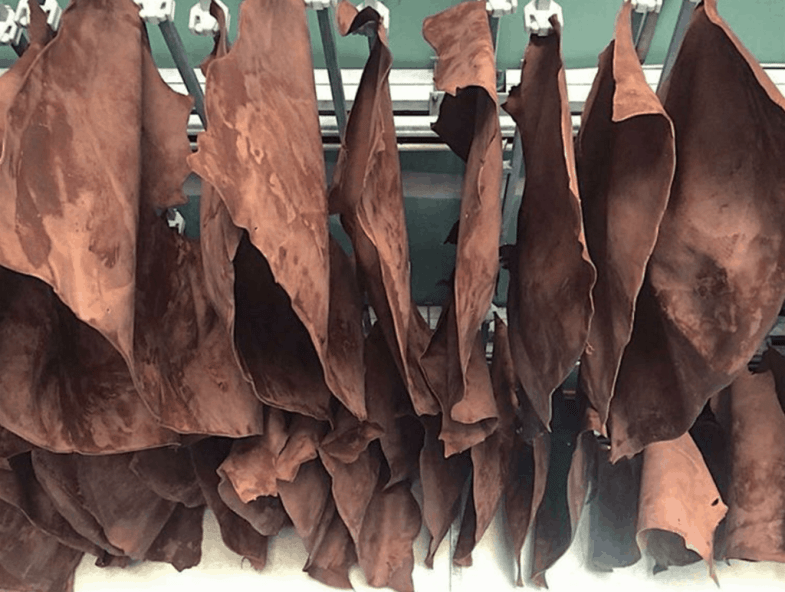 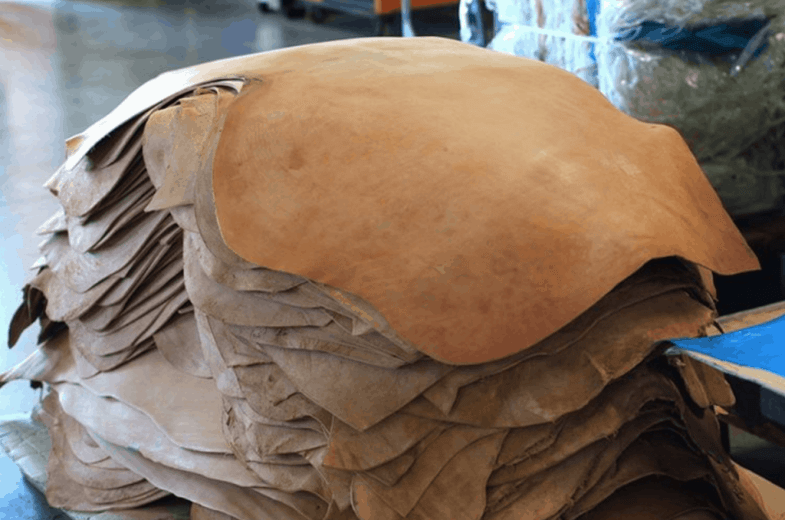 Later in the tanning process. 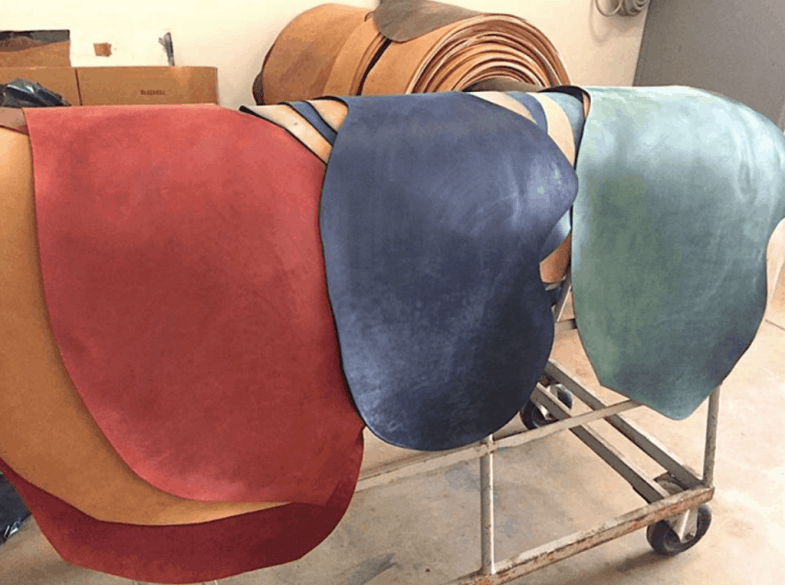 Here the dye has been applied, and the final finish remains. 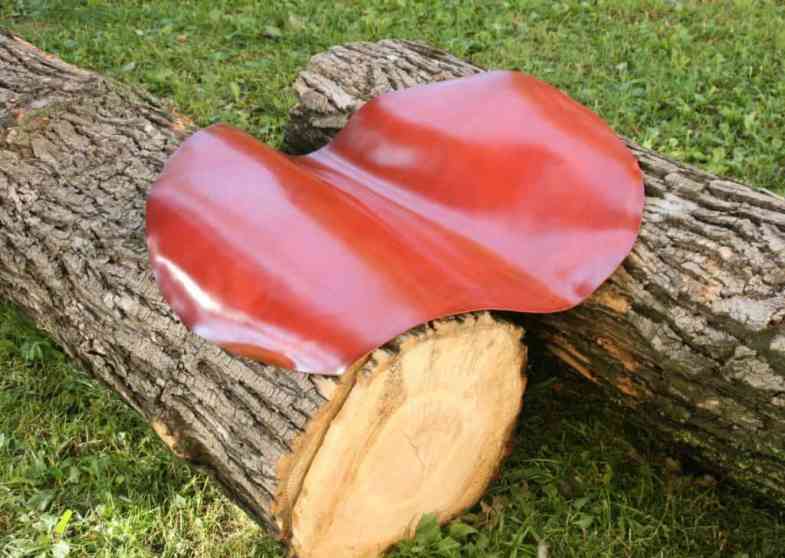 So a finished skin from Shell Cordovan, in the shade Cranberry.

Shell Cordovan has for many years sold a lot of their cordovan to domestic and European shoe manufacturers, but also exported to Japan, USA and Canada. In recent years as mentioned the interest in cordovan has increased enormously, not least from shoe manufacturers, which means that it is increasingly difficult for many smaller players to get cordovan from Horween in Chicago, which is by far the world’s largest supplier of the leather type. Although Shell Cordovan also sells to some bigger players it’s now mainly the smaller producers they are targeting now in order to grow further, with a business model that makes it easy to buy small quantities and with a good, close service.
– It’s one of our strengths, we are easy and flexible to work with, both in terms of purchasing but also in what we offer for the product, Maxim Bobrikov says. 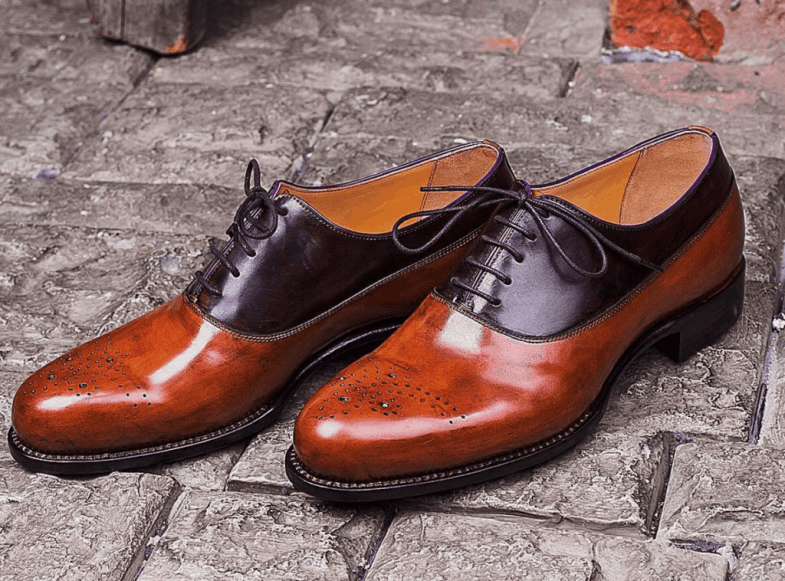 Shoes in two different shades of cordovan from Shell Cordovan, made by the Russian brand Migliori. Picture: Migliori

The supply of cordovan from the tannery is relatively wide. The largest part is of course the usual cordovan-skin, an oval portion of one side of the horse’s but which is big as a hall carpet, from Shell Cordovan you can also get it in different thicknesses. They offer a special variant called Double Shell which is both cordovan parts linked together with an interconnecting part that runs over the horse’s tail. A skin that is relatively complicated to produce and is of special interest from for example belt manufacturers who want to avoid having to splice the pieces to get the full length.
– This is one of the fascinating things with cordovan leather, that it’s so special. For example, there’s only certain kinds of horses breed whose hides are suitable for making cordovan, we get them mainly from Poland, where we have good contacts, and to some extent from Venezuela. But even then, it’s many skins that you have to give up to make cordovan from during the course of the process, when for various reasons you find that the skin is not suitable, Maxim says. 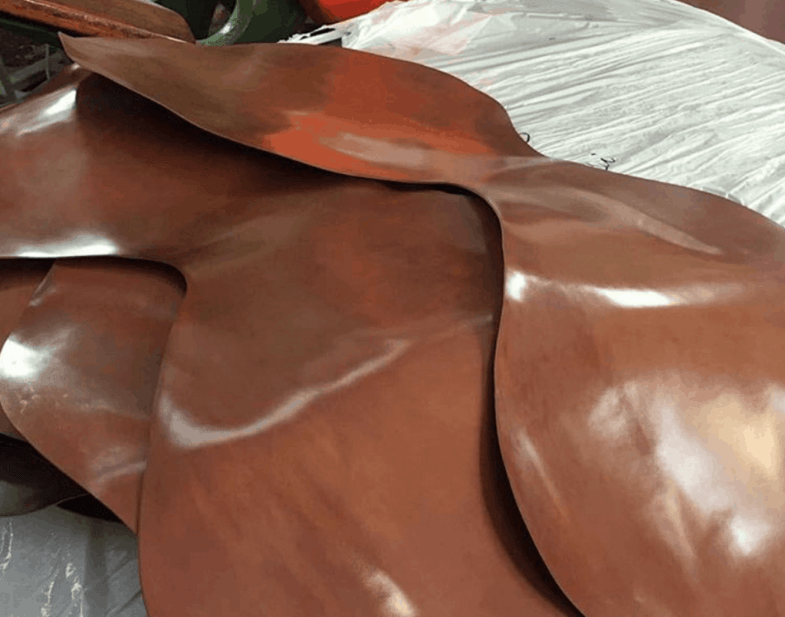 Shell Cordovan’s skins are a bit cheaper than Horweens, they cost around €58/sq. Feet. Just as Horween’s cordovan (and basically all other cordovan tanneries in Italy, Poland, Japan and Argentina, where most of them are based) the tanning process is completely vegetable, and about 100 different steps are reviewed before they are ready cordovan-hides. Shell Cordovan’s hides is a bit stiffer and solid than Horween’s, while the Cordovan layer, the muscle membrane, is almost twice as thick. It’s a bit more dry in nature, but they have recently started to use more oils and waxes in the final treatment which makes it approach the character Horween’s hides has. And many shoe manufacturers appreciate their hides and think that they are suitable for footwear, not least for the chunkier shoe styles.
Shell Cordovan is still a very small tannery, but the ambition is to continue the journey that now has begun.
– We can and want to grow. And when we get the production up we will also be able to reduce prices further, hoping to make cordovan more accessible and give more people the opportunity to own products in the material. 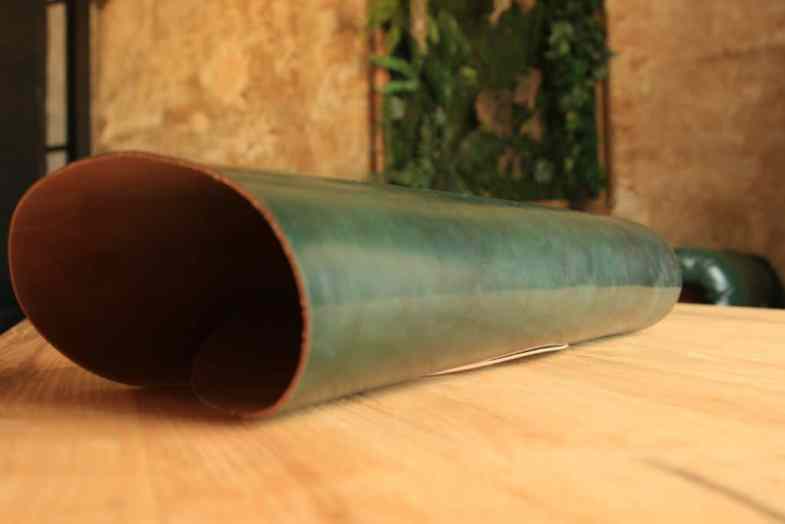 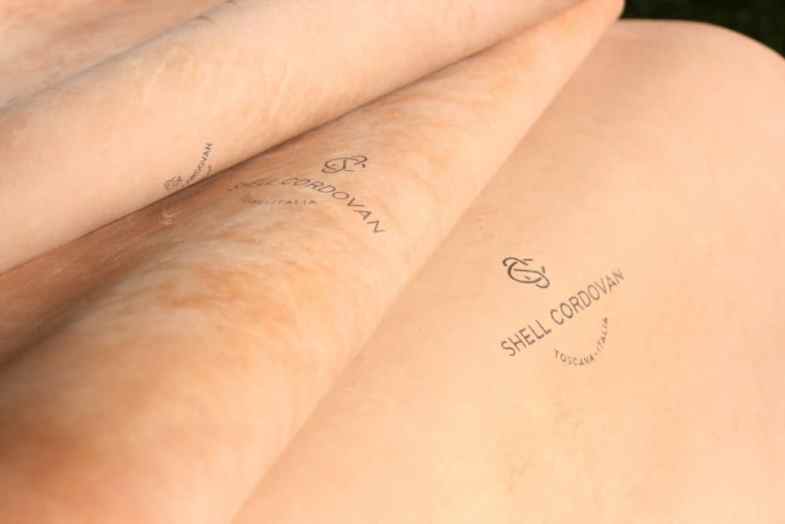 Marking on the hides back. 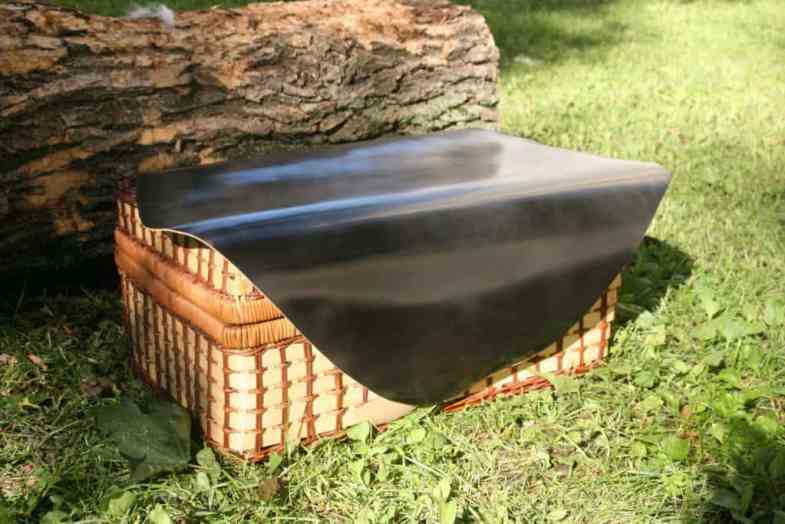 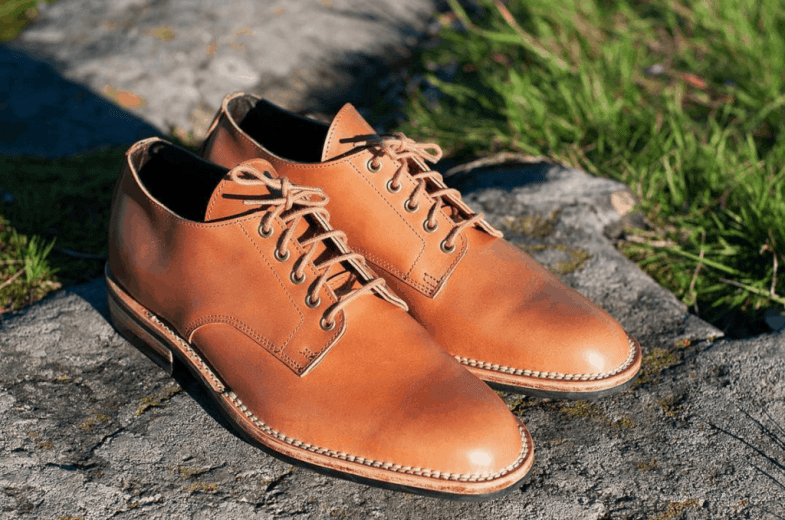