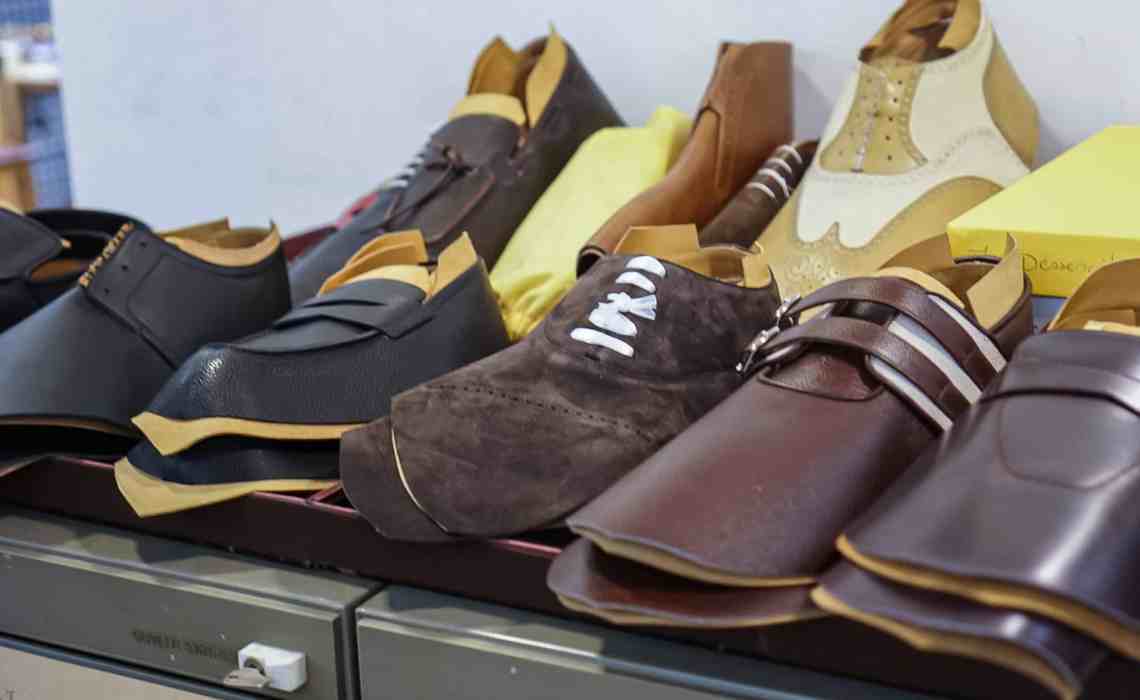 The bespoke workshop of John Lobb Paris is a legendary place for shoe aficionados, known to be one of the largest and most well-trimmed shoemaking workshops in the world. Everything is done in-house in the 600 square meters large premises on Rue de Mogador in the heart of Paris. Shoegazing paid it a visit.

Anyone who has visited Paris knows about the grand feeling the city possess. It’s full with large historic buildings, park areas and plazas are enormously spacious and airy, the streets are wide, the roundabouts are huge, and so on. To walk around in Paris is to be constantly amazed. Entering the premises of John Lobb Paris and the showroom, workshop and office of its bespoke department at Rue de Mogador is sort of a similar experience. Everything is large and impressive, and there’s so much to be enthusiastic about here. There’s lots of things to be impressed by when visiting the John Lobb Ltd. workshop in London as well, but the feel is totally different. In London it’s like nothing has changed for many decades, it’s almost as entering a museum in dimmed light. Here in Paris, you experience a bright modern bespoke workshop – even if the shoes are made the old school way. The same difference is found in the products, if you like the old fashioned style of the London Lobb or the modernised French flair of Lobb Paris is down to personal preferences. 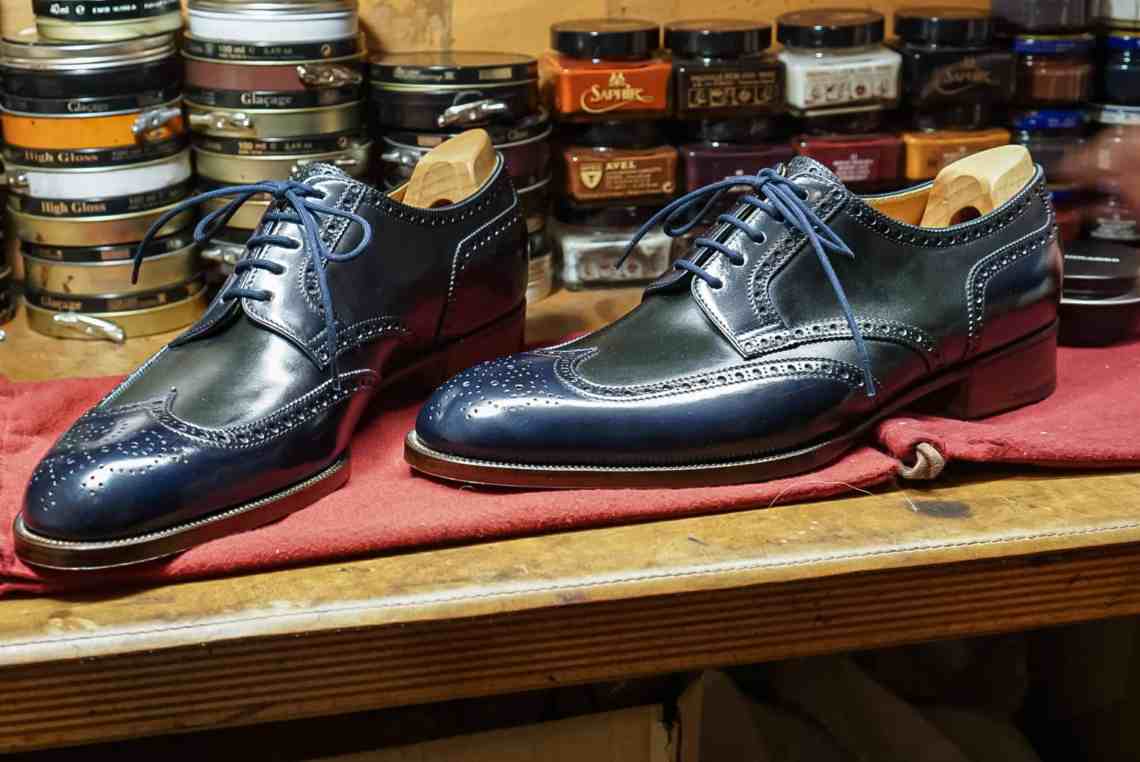 When one talk John Lobb, it’s always in place with a brief walkthrough of the background. The founder John Lobb started a bespoke workshop in London already in 1866. It quickly became successful and recognised, so 1902 they also opened a workshop in Paris. It was located close to the British embassy, a strategic location with a good clientele, and with the strong shoemaking tradition of France it quickly grew. During the World War II when the German invaded Paris, the saga of the workshop could have been all, if it wasn’t for a worker who managed to save a large number of lasts, tools and other material. Only one week after the liberation they could open the workshop again, and continue its history.

In the 1970s men’s dressing habits changed rapidly, and as many other workshops – tailors, hatmakers, shoemakers and so on – the John Lobb workshop in Paris started to struggle. At the same time they were thrown out of the original workshop they rented, so the French fashion house Hermès offered them to move to their premises, which they did. Three years later Hermès bought the Paris workshop from the Lobb family (who still operate the London workshop themselves), and they also bought the right to manufacture Ready To Wear shoes under the John Lobb name. Although the possibility to produce factory-made Goodyear welted John Lobb shoes likely was an important target of the acquisition for Hermès, now done in their own factory in Northampton (read a report from the John Lobb Paris RTW factory here), the luxury fashion house has also continued to develop the bespoke shoe business, and made it one of the most renowned ones in the world. My host during the visit is Patrick Verdillon, Director of  the John Lobb Paris bespoke business. He’s been part of the jury of the World Championships in Shoemaking the two first years, so we know each other from before. It’s nice to visit him on his home turf and see how proud he is of what they are doing here.
– What I’m most proud of is the fact that we do everything in this building. Designs, patterns, lasts, closing, bottom making and finishing, even the shoe trees. This gives us good control of every step and we can be sure to deliver a great end product again, again and again, Patrick says.
When I visited (a while back, before corona so don’t know if that has affected things) there were about 14 people in the workshop. One pattern maker, three lastmakers, four closers, three bottom makers plus one apprentice, and one person part time doing shoe trees. They also have three external bottom makers, people who used to be in the workshop but now work from home. Several famous names have led the work here through the years, like Philippe Atienza and Michel Raballand. The annual production is around 600 pairs.

The workshop and office area is located a few floors up in the building. In the office the most delightful place is a shelf which houses a number of old bespoke samples from various decades, several of them which are really lovely. But of course the main attraction is the workshop. Unlike their colleagues / competitors in the Berluti bespoke workshop (read a report from that here), which is housed in several smaller rooms, here we have a large open space with windows letting in light from both sides of the room. In the various sections workers are calmly engaging in various tasks. One bottom maker is preparing the holdfast, another one is in the early stages of lasting an upper on an alligator leather pair. From further away you can hear the sound of sewing machines.
– In total, we have around 600 square meters in the building. Apart from this floor with main workshop and offices, we have showroom, shoe trees workshop and storage on the ground floor, Patrick Verdillon explains. 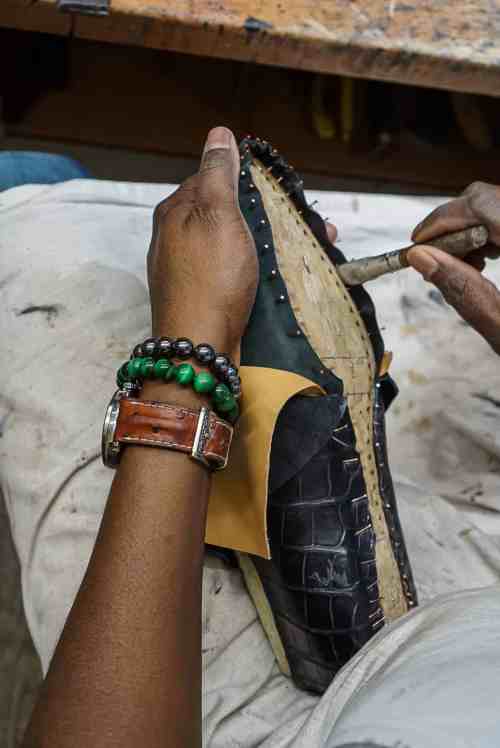 We head down to this area, pass through the room where shoe trees are produced – something quite rare for bespoke shoemakers, most buy theirs from specialised shoe tree makers – into the last storage room. About 400 pairs of lasts can be found here.
– Then we have another storage space located elsewhere for less recent lasts, since we don’t have infinitive space here.
Further in we find the leather storage room, and for someone who appreciate good leather there’s surely some amazing stuff here. Hermès themselves own a number of the best tanneries in the world for calf leather as well as alligator and crocodile, needless to say the company’s own brands have access to the finest pieces, and for example there’s one shelf with only alligator and croc hides of various colours of the absolute finest quality.
– That is one of the benefits to be part of a large group like Hermès, you have some possibilities that other smaller players lack, says Patrick.

He explains that there’s a clear plan with developing both the bespoke and RTW side entwined. When they set up the John Lobb Paris RTW back in the 80’s, they took some of the most popular of their bespoke models, like the double monk strap William and the quarter brogue oxford Philip, as well as used wooden bespoke lasts as base for many of the now iconic lasts that are still in use.
– More recent examples are how many of the Saint Crispin anniversary models made in Northampton are developed in the bespoke workshop here in Paris, like the now often copied spiral wholecut model, as well as the recent seamless wholecut model we launched for the factory made range, Patrick Verdillon says.
John Lobb Paris as a company is surely a progressive force within the classic shoe world, merging the old with the new.
– Here I would say that we’ve been helped by Hermès way of thinking. We want to challenge ourself, keep ourselves on our toes. Things get more interesting that way. Loads of alligator and crocodile hides of the highest quality, a shelf worth a fortune. 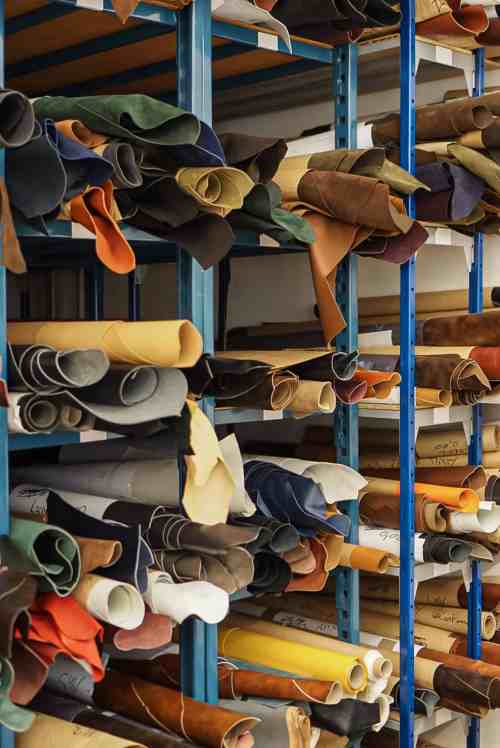 At John Lobb Paris they make most of the shoe trees themselves. 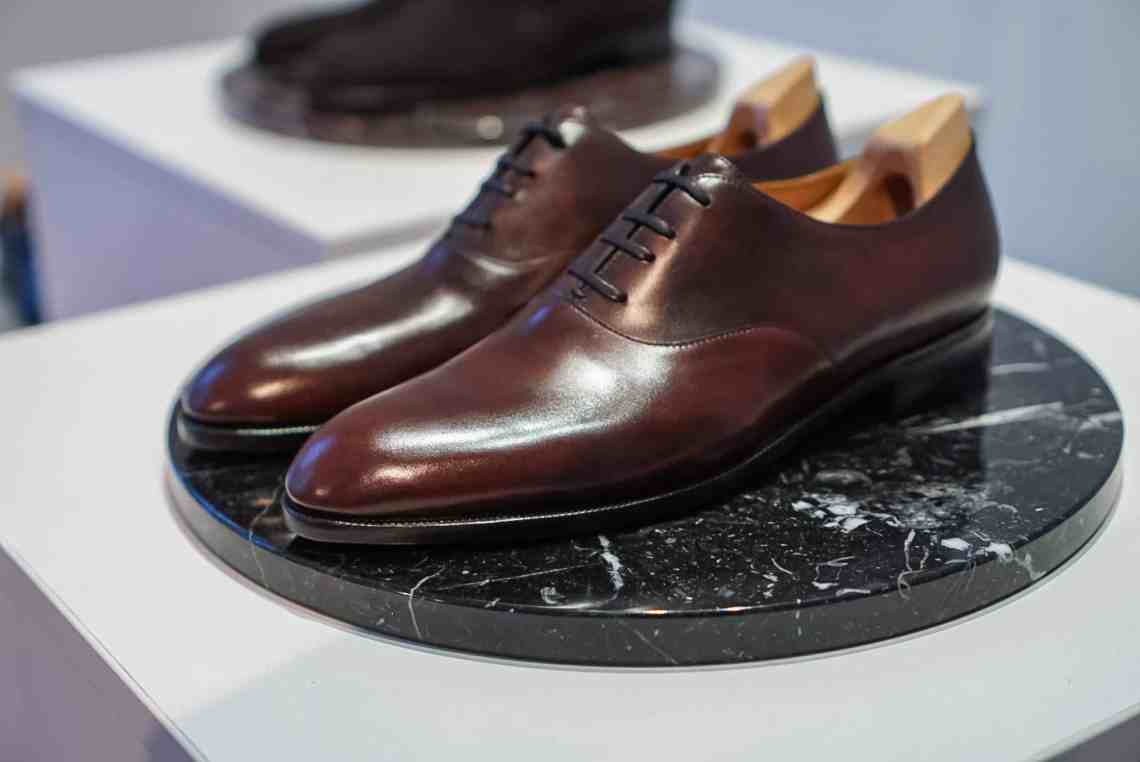 From the large showroom at the entry level floor of the Rue de Mogador premises. Same shoe seen from above, also with solid gold buckles. 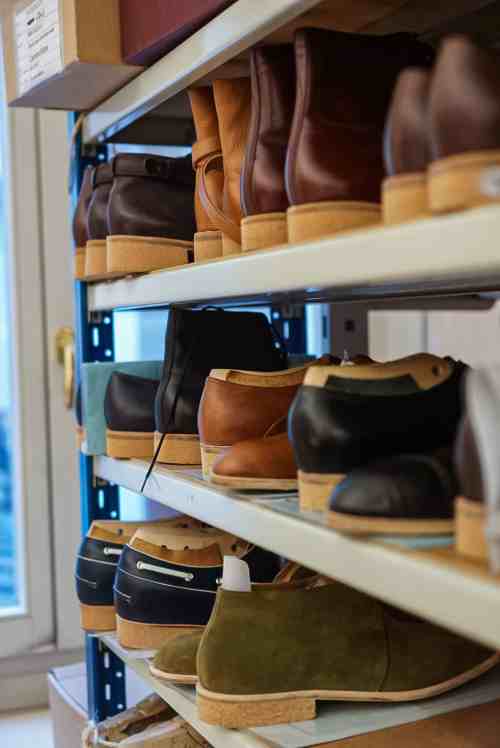 More classic things, albeit with a twist on how the lacing is spaced. 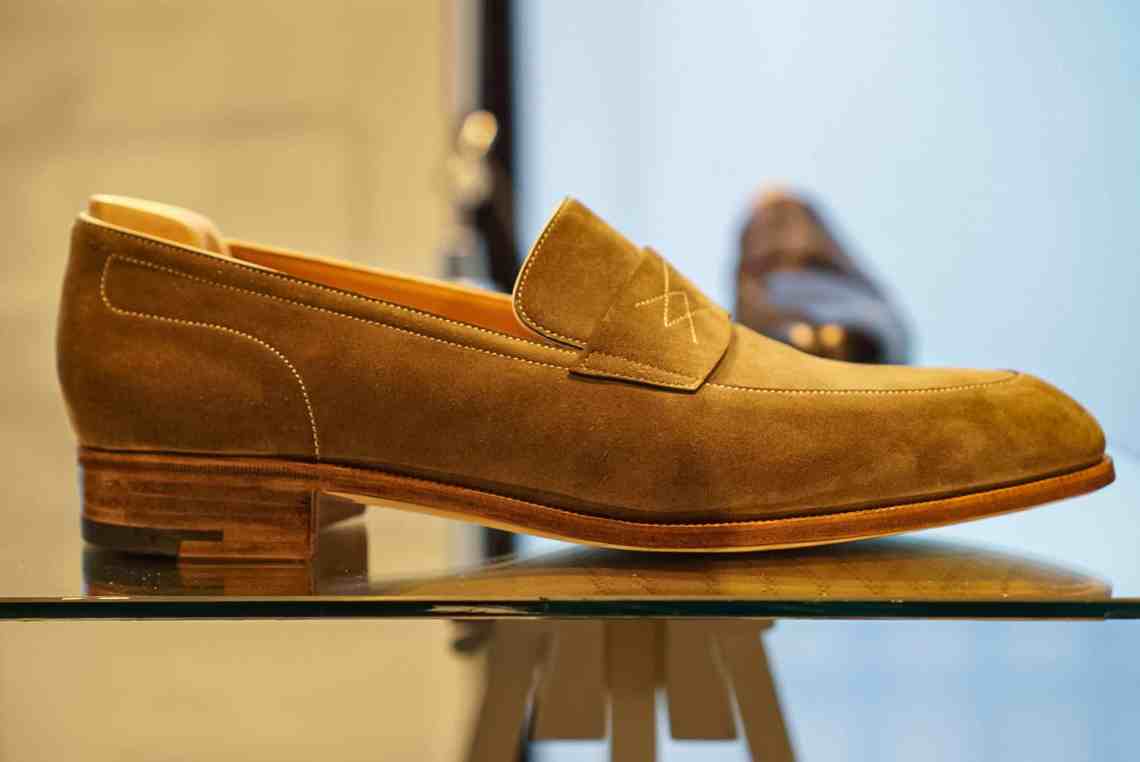 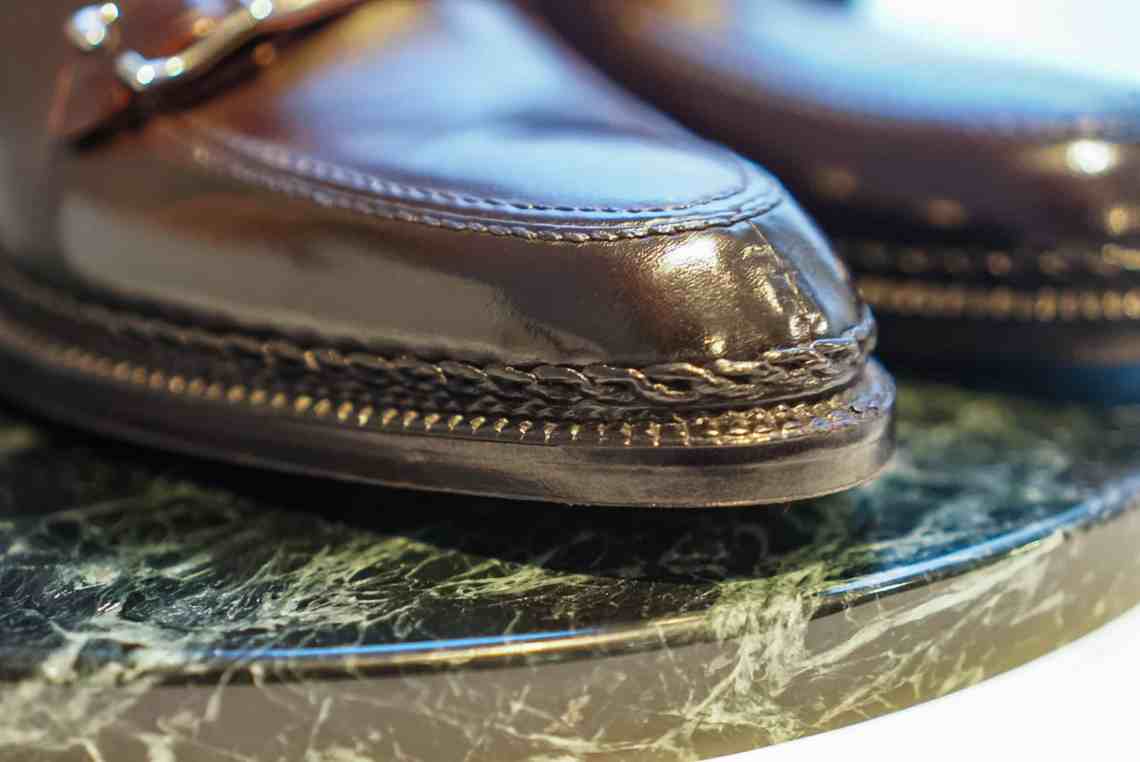