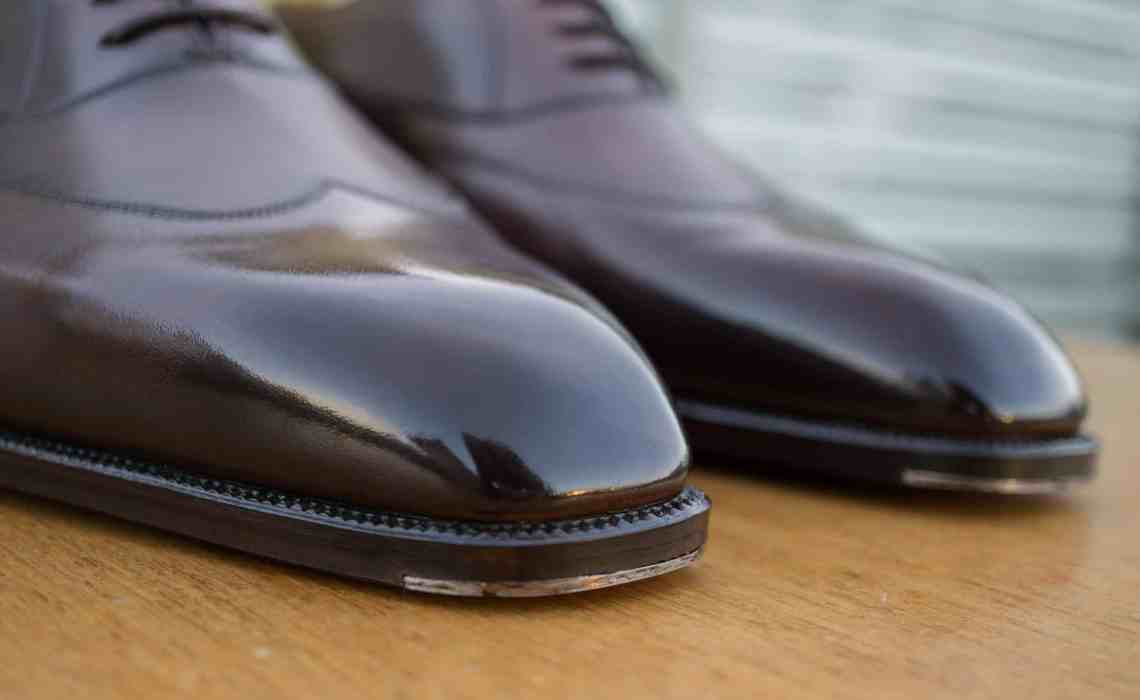 The article series that followed all parts of the process of ordering a pair of bespoke shoes from Gaziano & Girling, from the measuring up through several fittings to the production of the final shoes. Here’s a summary and many pictures of the finished goodies.

Most of you readers probably know it all by now, that I’ve in a number of reports on the blog followed the process with an order of a pair of bespoke austerity brogues from Gaziano & Girling in their store on Savile Row (read about it in part 1 here), then I had a first fitting in Stockholm at Skoaktiebolaget (read part 2 here), and at the second fitting only minor changes was left to do on the lasts (read part 3 here), and then you could follow the whole manufacturing process of the final pair in a very substantial post (read part 4 here).

Now the shoes are entirely finished and delivered, and I’ll try to summarize how I experienced the process and my first impression of the shoes. To begin with, one thing I have noticed is the great care that has prevailed throughout the process. In everything from how measurements are taken to the processing of side reinforcements. Not that things are necessarily slow, Daniel Wegan at G&G who made both the lasts and the shoes are relatively quick and efficient, but it’s with great accuracy it’s all done. The fact that they always have at least two fittings is also a clear sign of accuracy.
Two fittings were also absolutely necessary in this case, since the first fitting shoes were pretty tight, and it wasn’t until the second fitting as we were close to a good result. 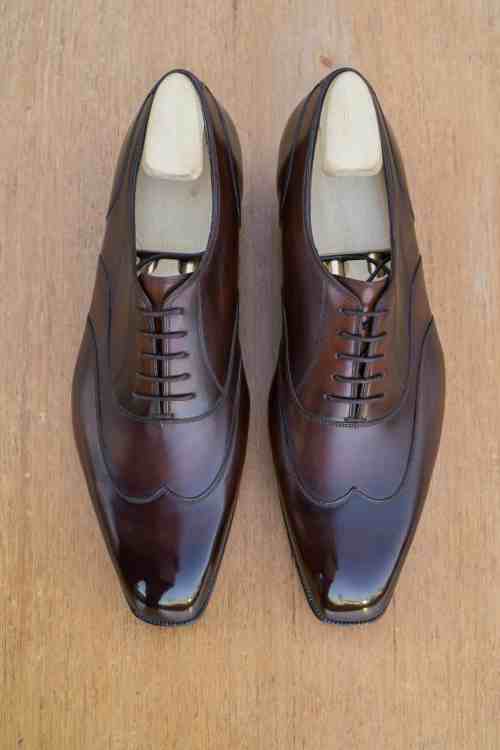 The shoes in all their glory. 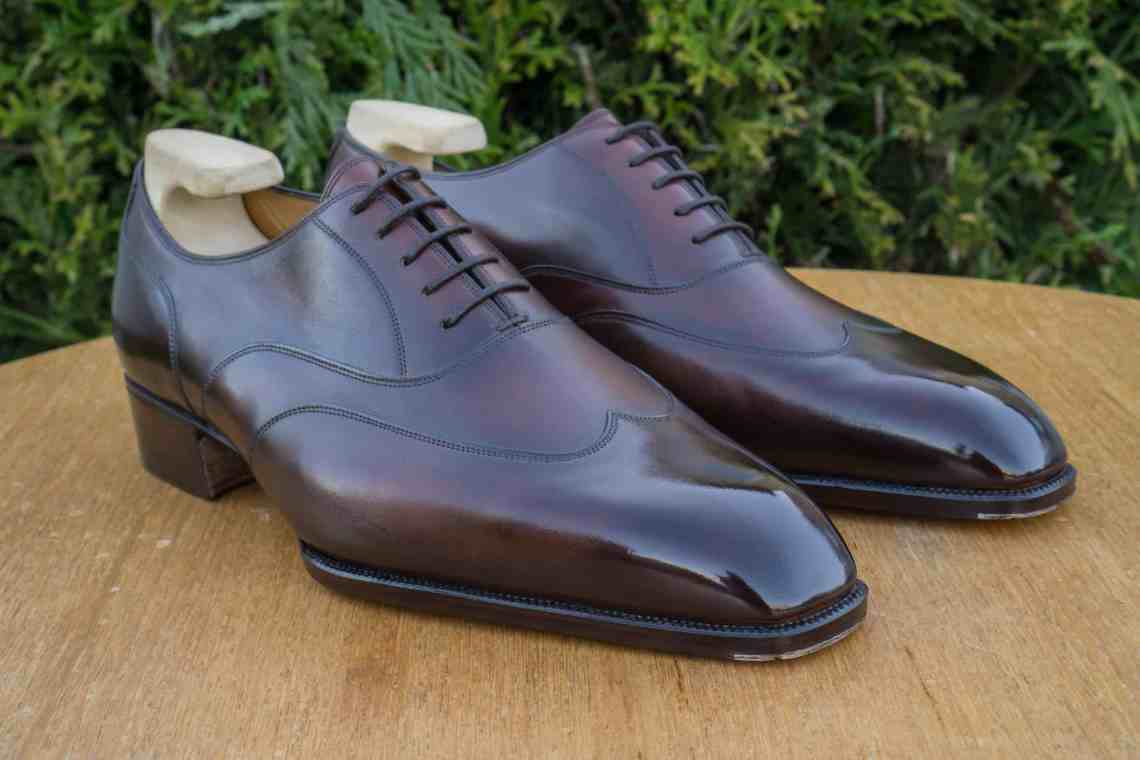 Note that I don’t have any lasted shoe trees here. It’s ideal to first break the shoes in, and then send them along with lasts to the Frenchman Herve Brunelles who makes G&G’s shoe trees for their bespoke shoes. Since he tests the trees to make sure the fit is one hundred percent in the shoes any changes that become after they are broken in can end up in the trees, so to speak. Sometimes the shoe trees fits even better than the first last pair, due to this. 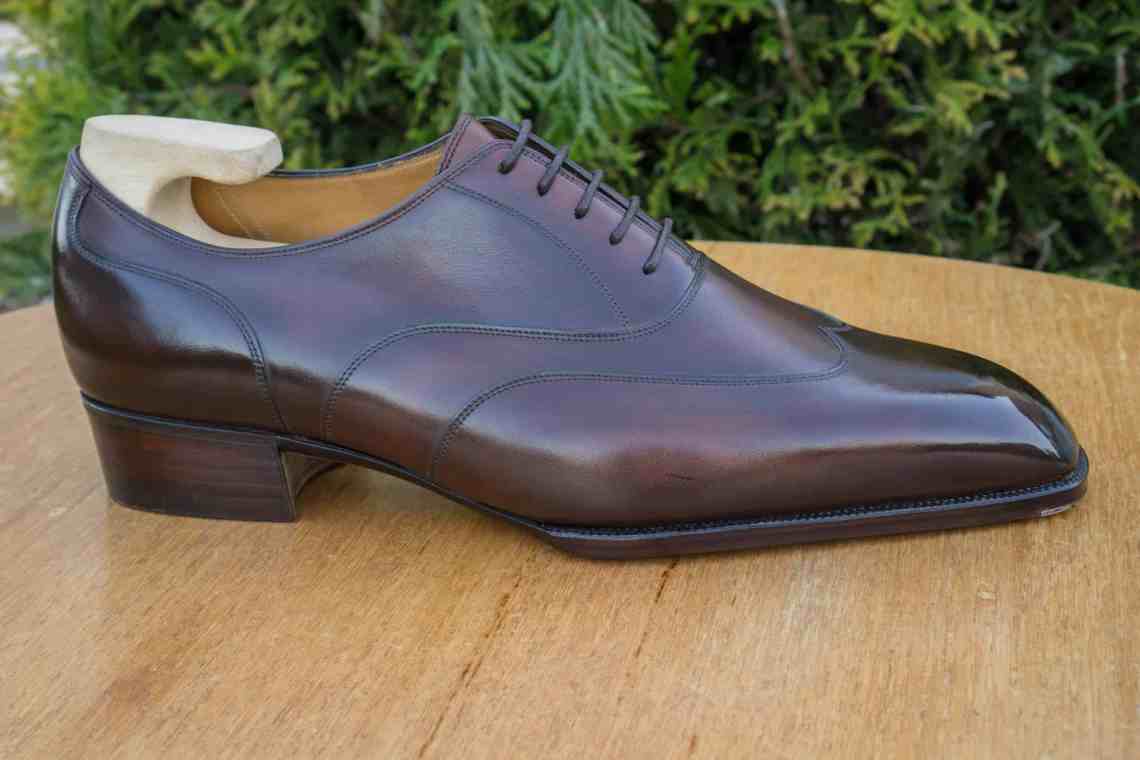 The accuracy is also evident in the end result. The level of the craftsmanship is very high, both in how complicated much of the things made are and also how well it’s executed. For example heels tapered slightly inwards at the back but is almost straight on the outer sides, to get all the different sides perfect this way Daniel has is extremely difficult. Or to take a very different example, the fact that the pattern matches on the different sides of the shoes, if you look beneath them shoes so it’s like each pattern goes under the sole and out the other side. It’s one of those things that basically no one would think of when they see the shoes worn, quite a few would even notice it if they kept the shoes in ones hands and inspected them, but for a good shoe manufacturers this is the stuff that matters.

I know that people love comparisons between different manufacturers, and I have already been asked about how I compare these with my shoes from, for example, Yohei Fukuda or Hiro Yanagimachi. I often say that when you’re up at this very high level that these manufacturers are, it’s really more a matter of what you like best. You can find small weaknesses in each of these if you really dissect them, but it’s seen from a very high level, and when most is more or less perfectly made, it can almost feel a bit ridiculous when you’re down nagging at things like how the sole edge dye isn’t completely consistent down towards the naturally colored sole at one edge of the waists, and things like that. 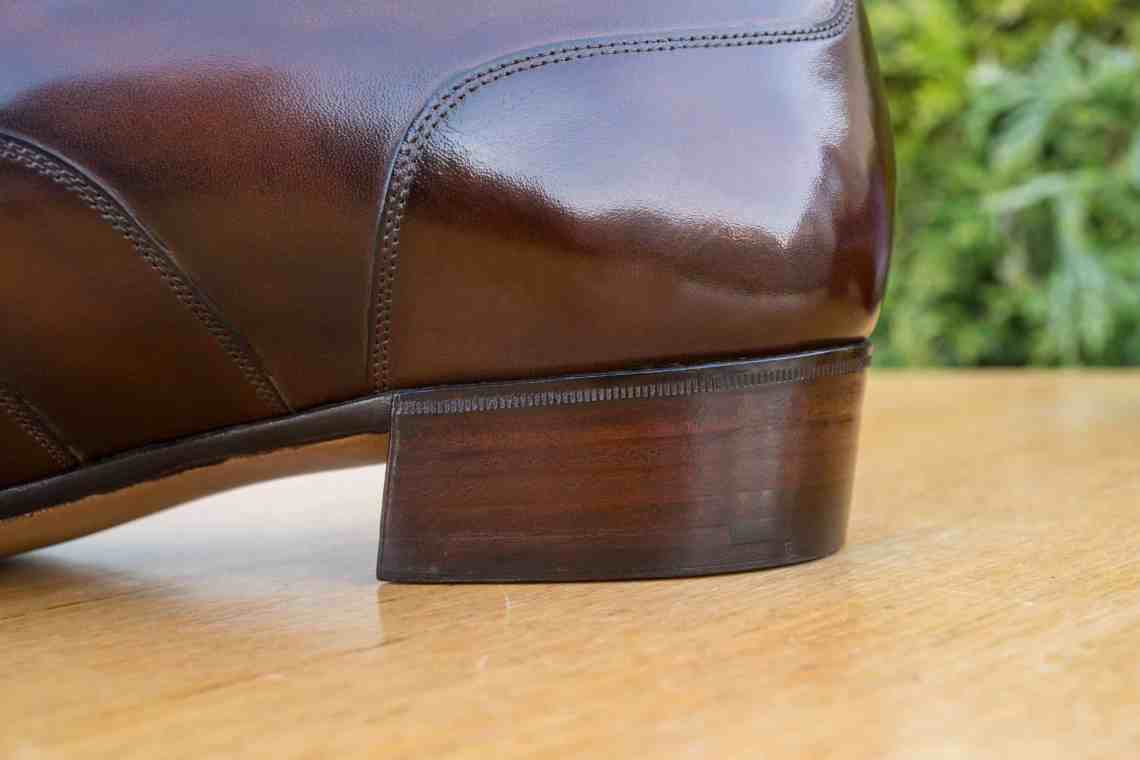 Very nicely built heel, with the slight slope inward at the back and the flat-built layers. 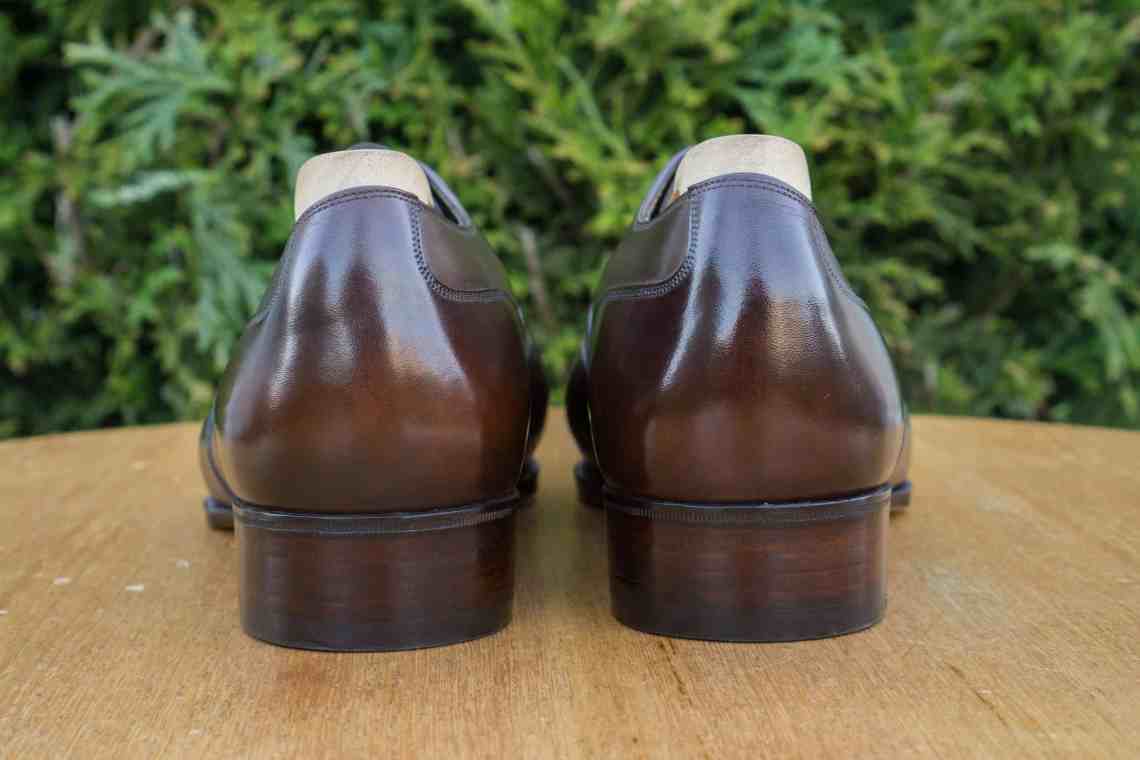 The heels seen from behind, where you can see how the outer edges tapers just very, very little. 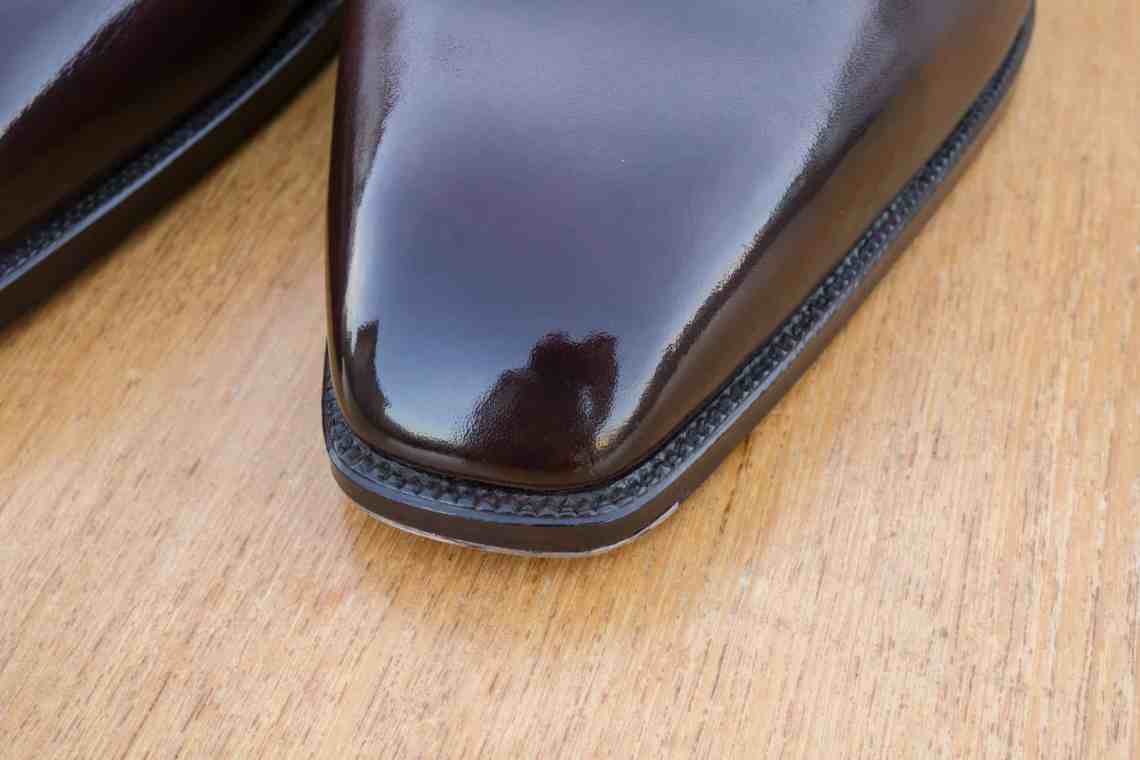 However, you should be able to ask for high standards when it’s products that has the prices these has. Since the last price adjustment the first pair of bespoke shoes starts approximately €5 850 (£ 4 950) including laden stretchers. The second pair and onwards start at €4 700 (£ 3 950). Those of you who followed the series and understood the extent of the around 100 hours of work that went into this pair will understand the price, but regardless, it’s a lot of money to pay for a pair of shoes. Not least the last manufacturing process and all the fittings is time consuming, and even if the first pair cost more, it’s really only for the second and ahead that G&G can start earning some money. Included in the calculation of the cost is also the risk that they make mistakes during production or with the finished shoes that force them to start all over again. Anyway, as I have mentioned many times before, to make bespoke shoes is nothing you can earn large sums of money on, there are other values ​​that’s the reason that people and companies are doing this.

The fit of the shoes are, with one exception, really good. Heel closes very nicely around the foot, the arch support is supreme, they are perceived as stable and sturdy yet comfortable and supple. That only exception is an area between the front part of the heel stiffener (which goes all the way under the arch of the foot) and the inner ball, where there is some space. The previous pair were a bit tight here, and with my sensitive hallux valgus I wanted to avoid this, but it became a bit too much material that was put on the last. Since it’s in front of the hard heel stiffener, it’s a bit problematic, we’ll see how we solve this in a good way 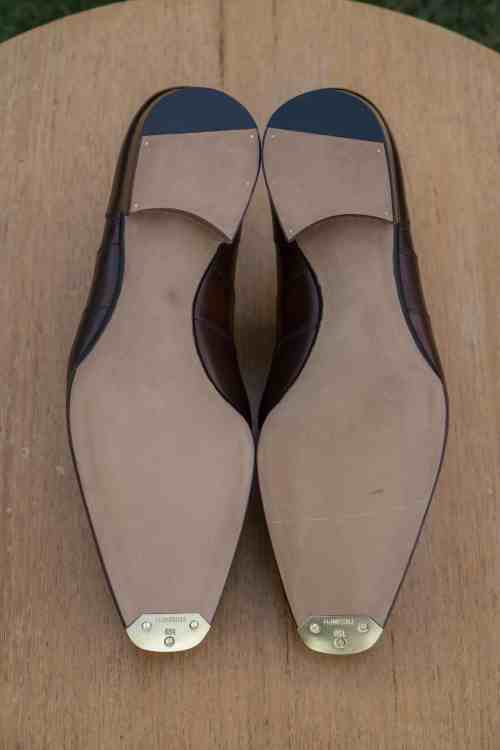 The soles with sunken toe taps. Waists are very narrow. 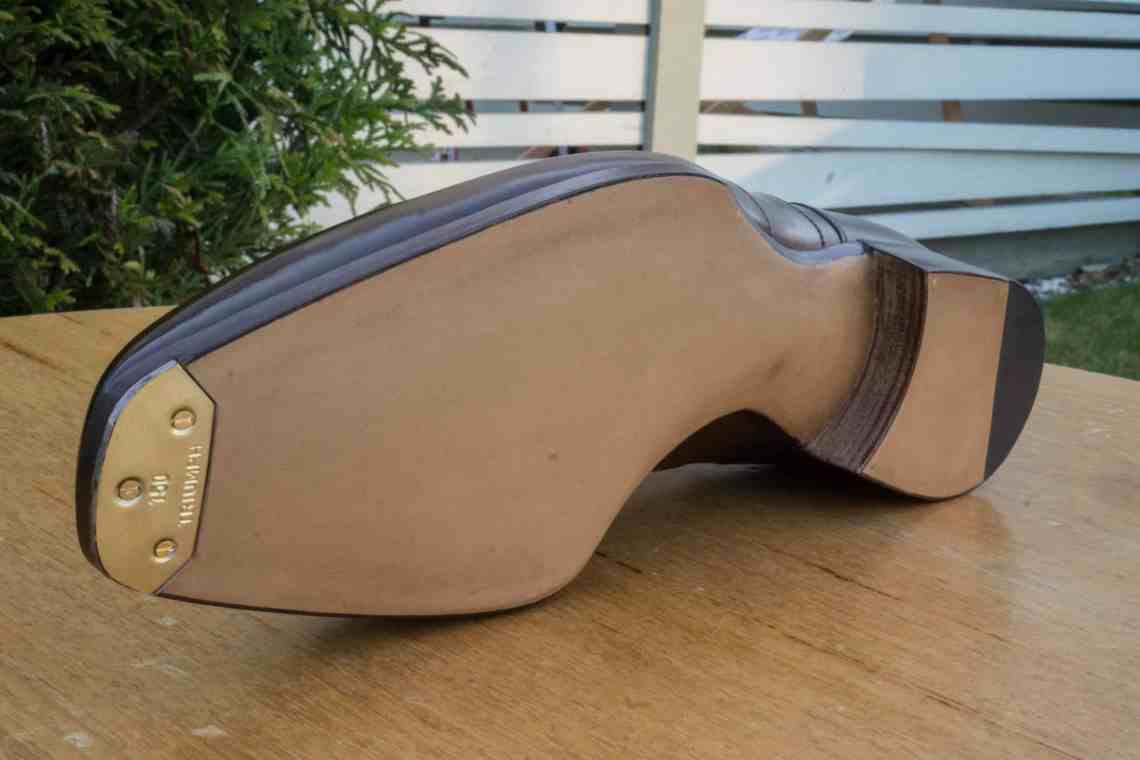 Since the waist is very narrow, it’s not built-up too high, but it has a relatively discreet bevel. 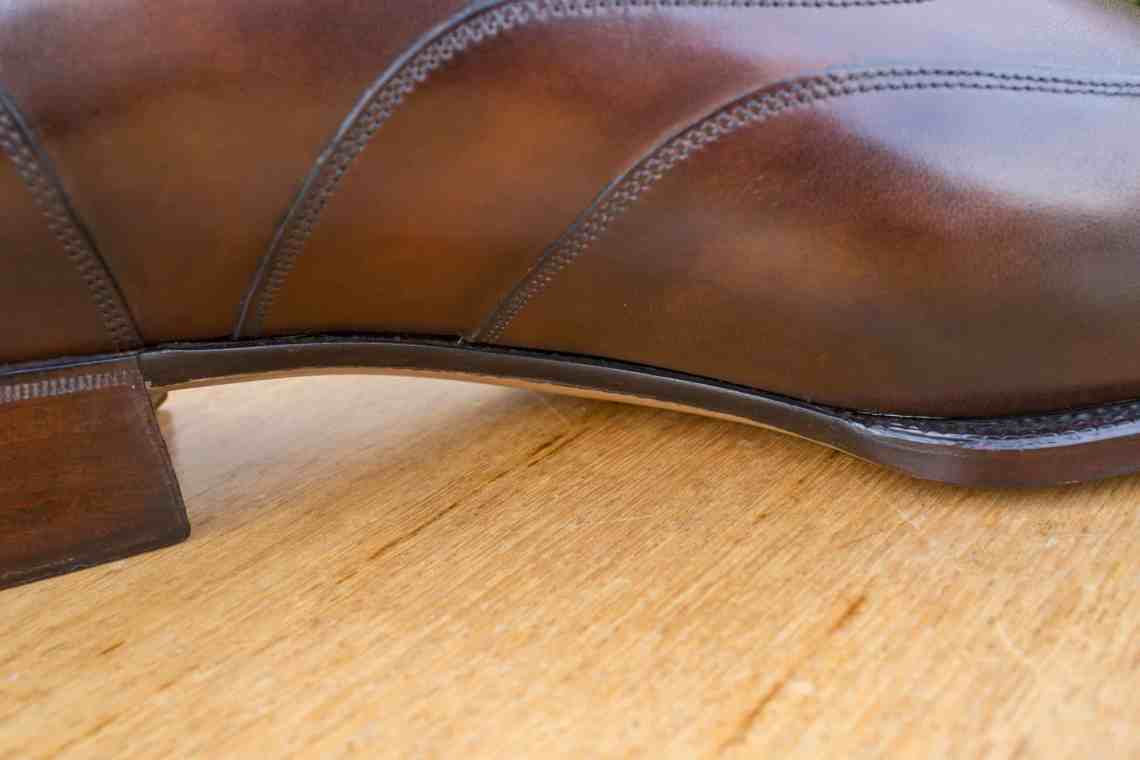 The edges of the waist are inwardly sloping and very thin, where the sole stitch are sewn far in and the seam and welt covered with the edge of the sole.

The upper of the shoes are made in a crust leather from a small Italian tannery Gaziano & Girling recently started to work with. Daniel Wegan are very fond of the leather, since the hides are a bit smaller with great vigor without being as sensitive as what’s called babycalf can be. And it really is a very beautiful, supple and nice material that will is easily polished and has very thin, fine creases. The patina made by Neus Benavent at G&G has a nice depth, was impressive to see how she worked out this in below an hour for both shoes. She also polished up a proper shine that does well on this type of shoe.

I had high expectation on these shoes. With the end result on my feet, it’s easy to understand why Gaziano & Giring’s bespoke department has the reputation that it has. It’s simply amazing creations. 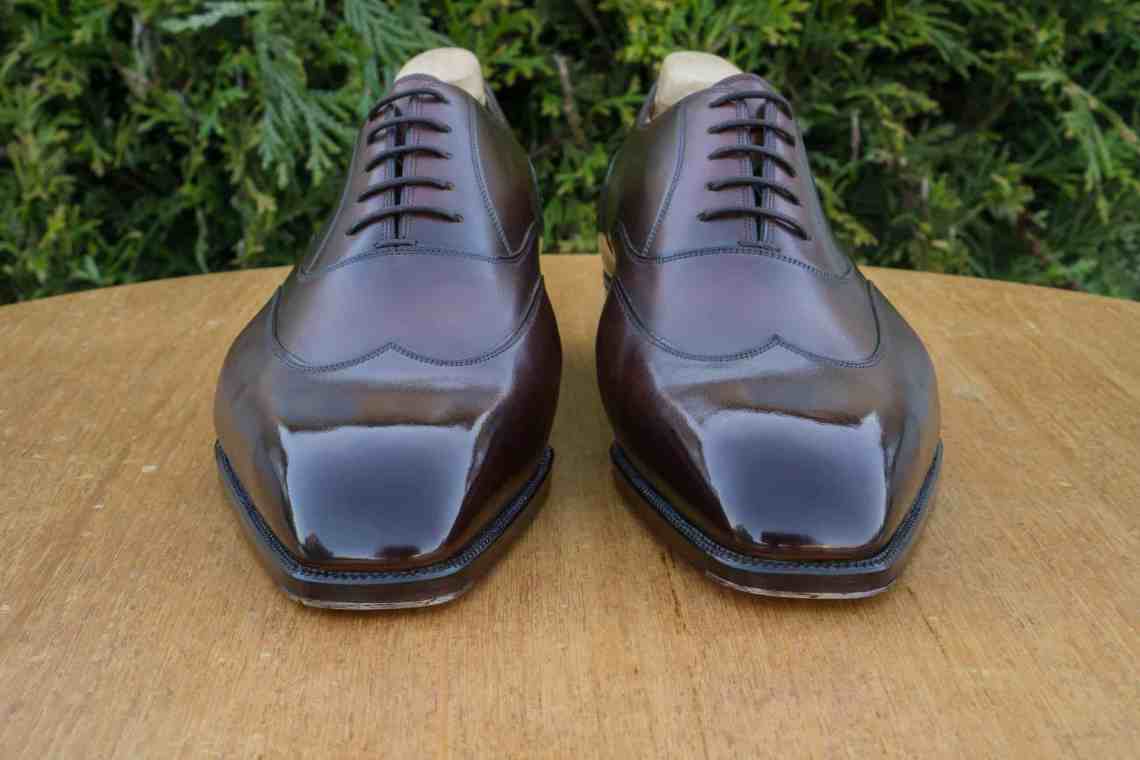 As usual, we end with a lot with even more pictures, both away from and close, and so even the feet. 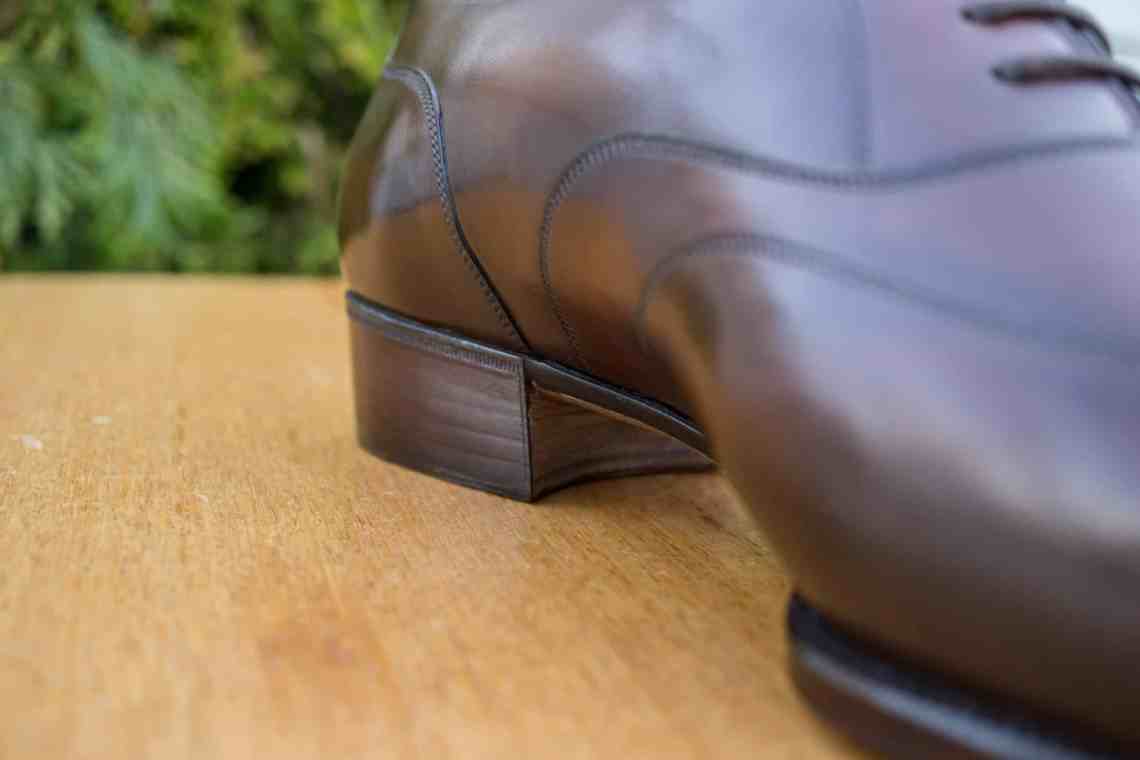 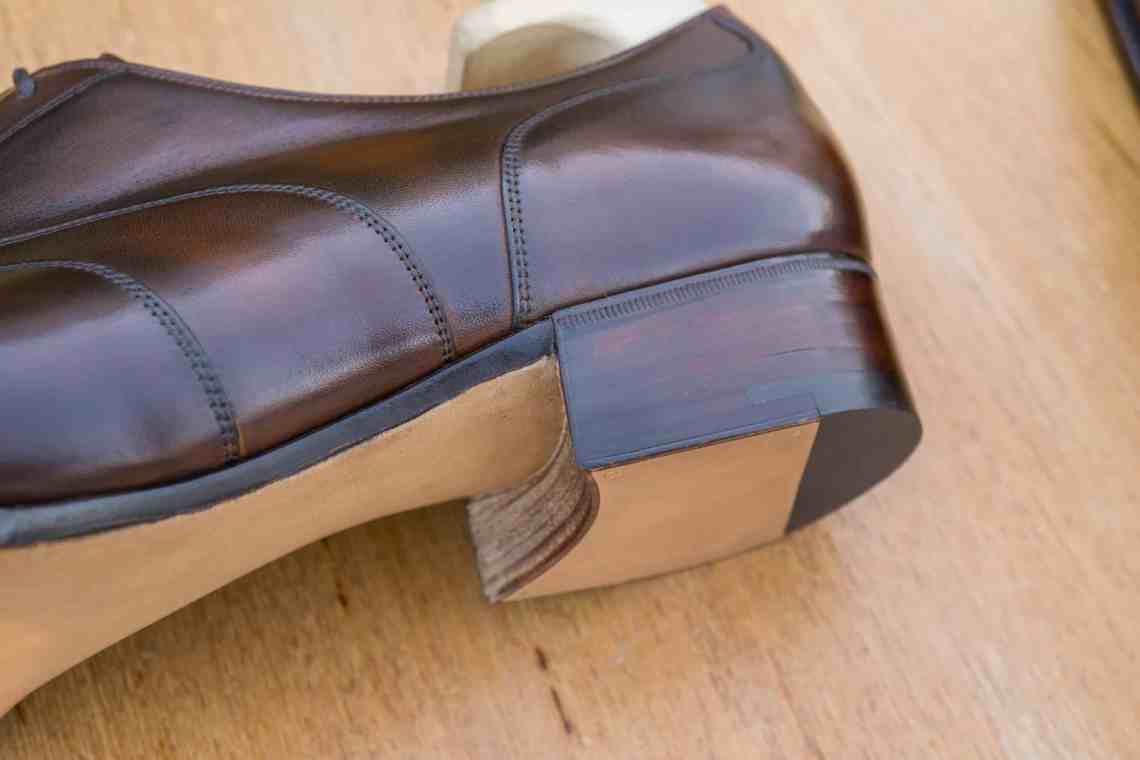 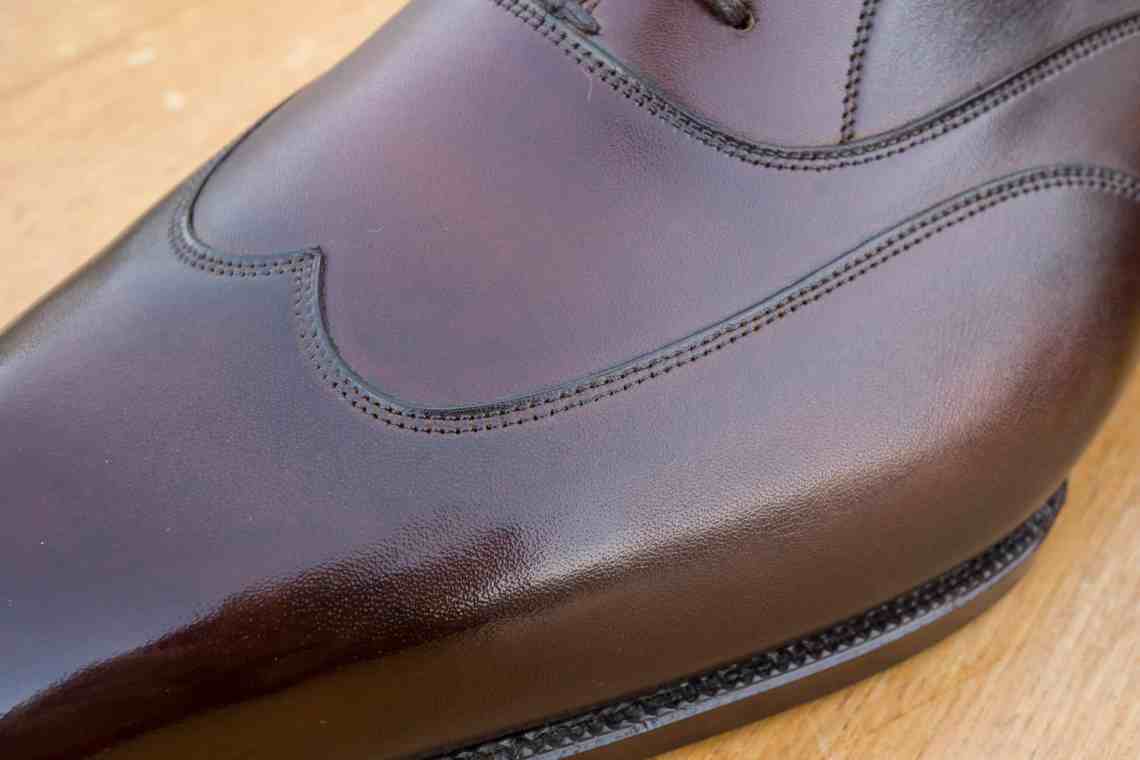 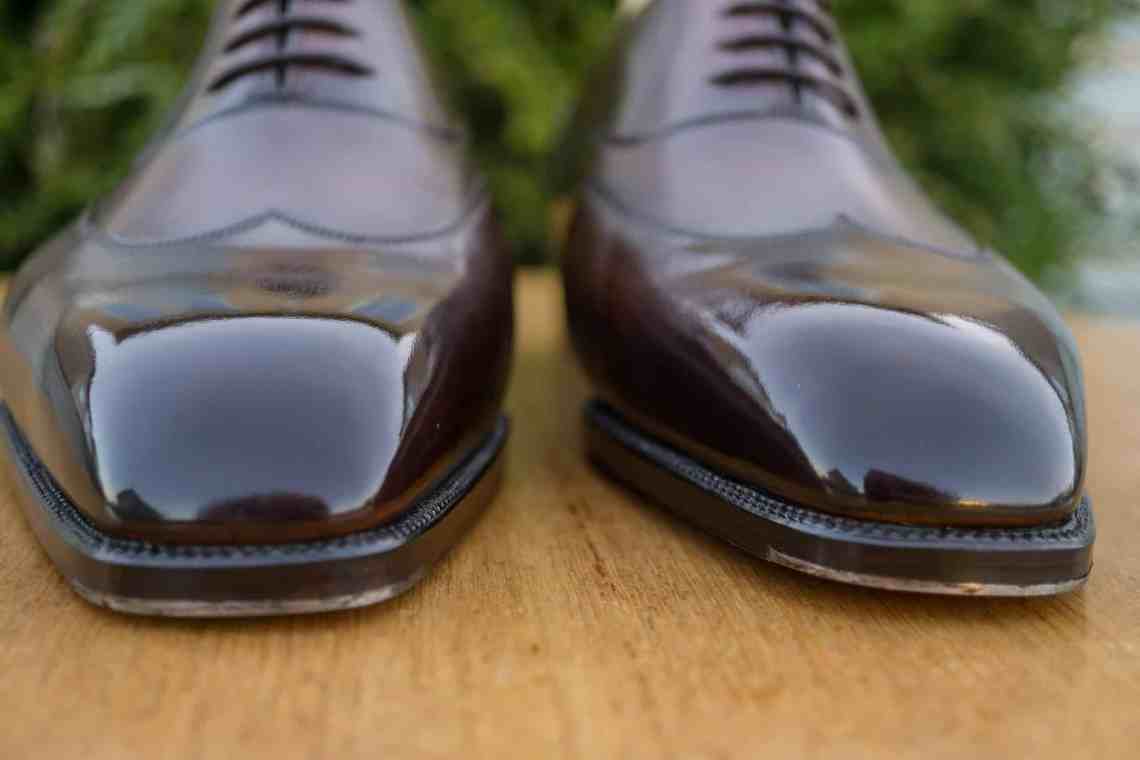 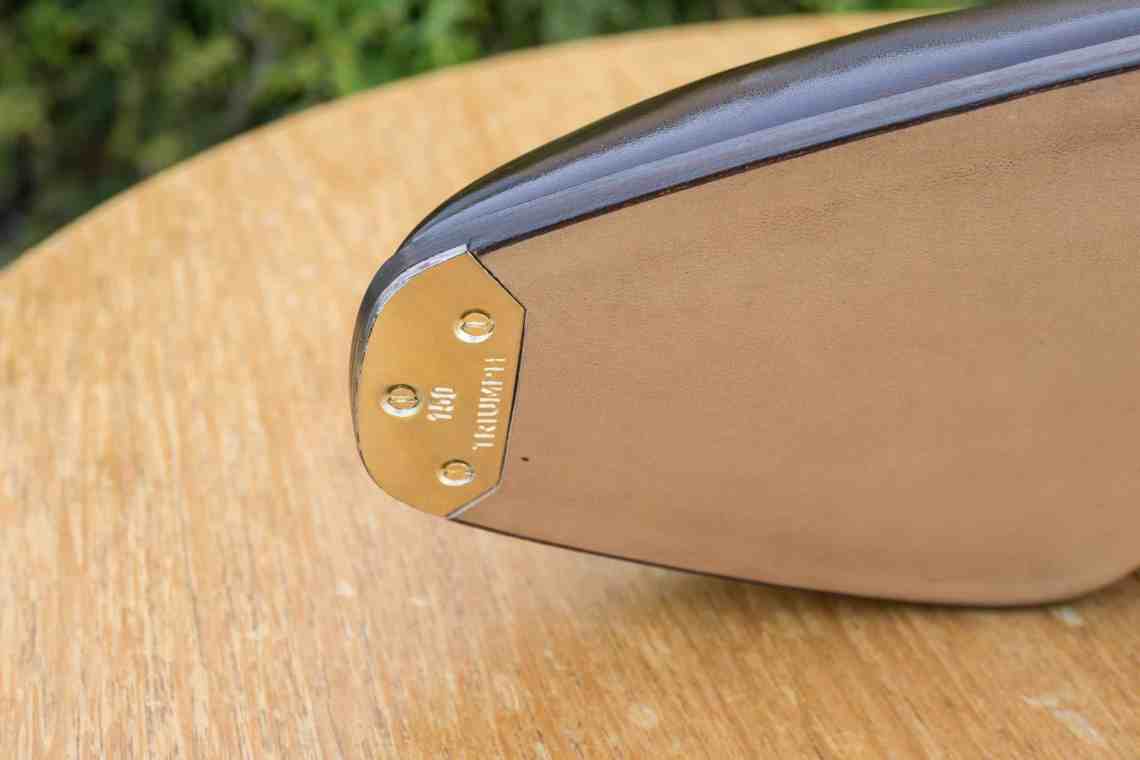 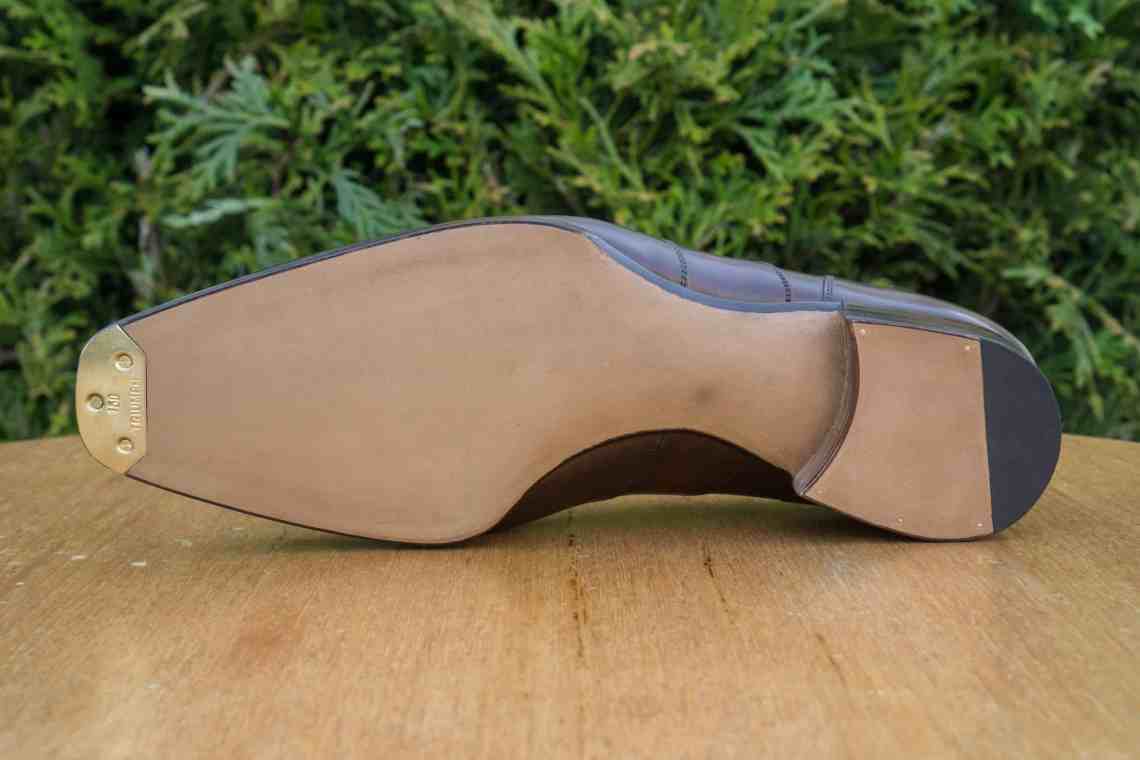 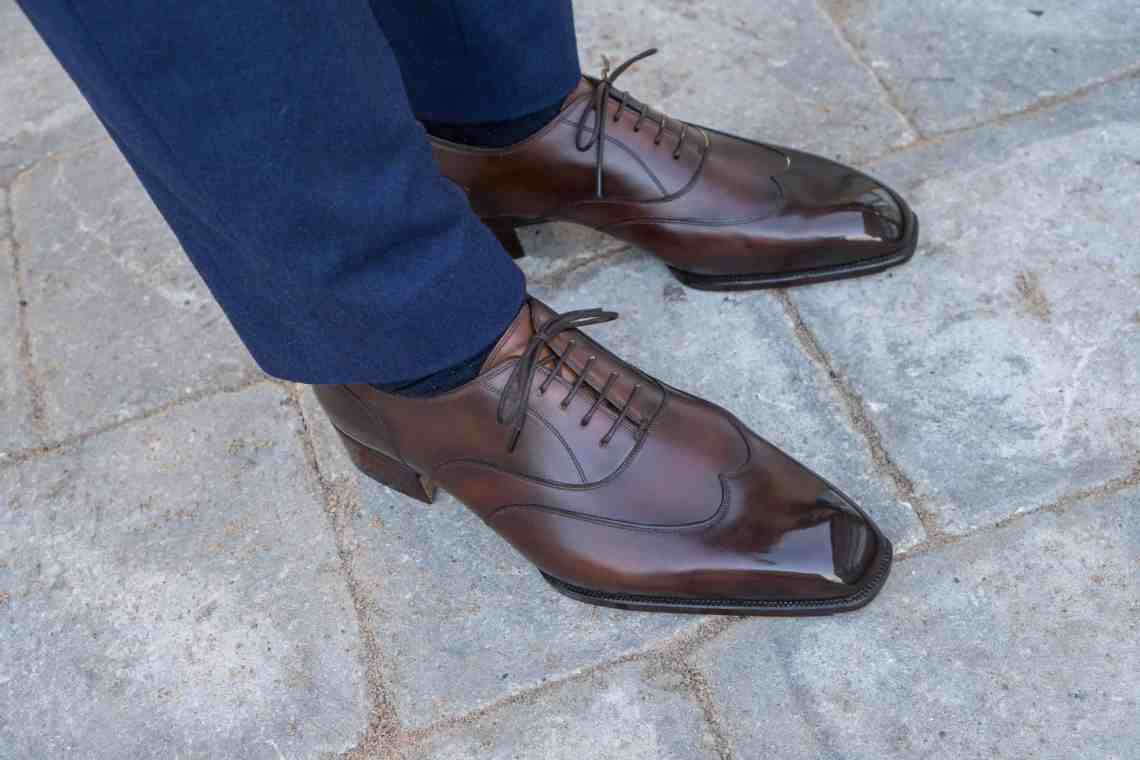 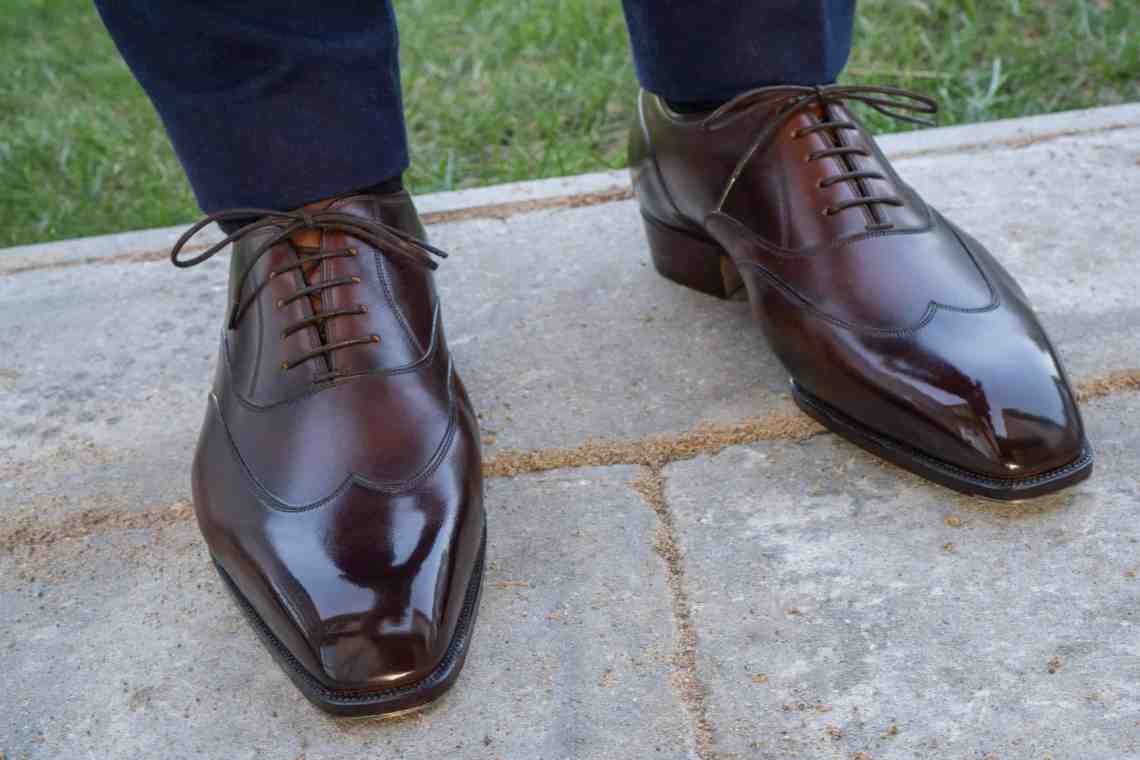 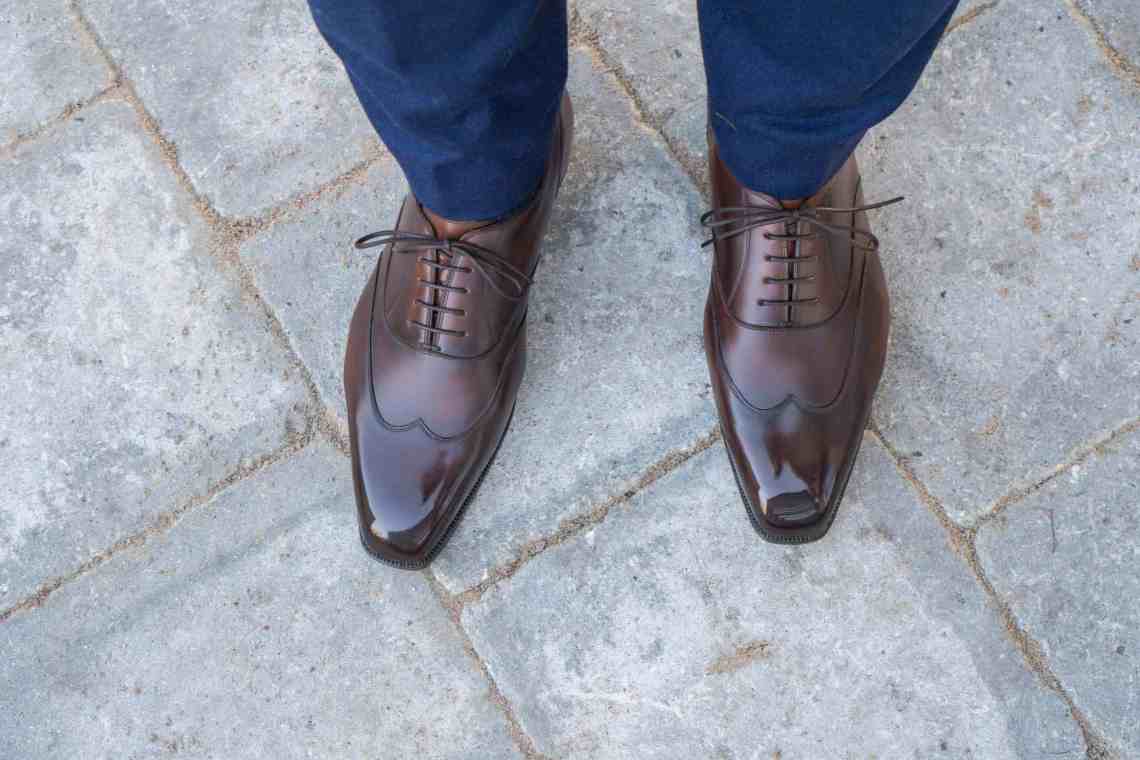