One of several Japanese manufacturers of really nice midrange welted shoes is the Vinaseiko factory, with their main brand Perfetto plus Kanpekina and Fugashin. It’s one example of a company working successfully with a joint factory in Southeast Asia to produce shoes with a great quality-price ratio. Shoegazing has paid it a visit.

Matsudo is a district northeast of Tokyo, part of Chiba, which is about 40 minutes by train from central Tokyo. I’ve been here a lot, since a ten minutes taxi ride from the station Eiji Murata of Main d’Or has his showroom and workshop. This time I’m heading to a different part of Matsudo, to visit the Vinaseiko factory. Very few know of the name Vinaseiko, however, Perfetto is a strong brand in Japan, Kanpekina is known especially in France, and Fugashin many Japanese know of and it’s probably the best known brand internationally. Many think of Fugashin as a Viatnamese brand, but this is a joint venture between the Japanese factory and a Vietnamese factory. A lot of Japanese brands make some ranges and / or some parts of some ranges in other parts of Asia, this goes for Otsuka, Oriental, Union (read more about them in this report) and others. The Japanese knowledge has meant a lot for the possibilities for these factories to prosper, and the Japanese manufacturers can offer a wider variety of shoes at a lower price than if fully made in Japan. A humble entrance to the main building of the Vinaseiko factory outside Tokyo. Outsoles and heels waiting to be attached to shoes. The Vinaseiko factory is spread out in a different buildings, and I’m guided into the main building by Makoto Shimamura. He runs the operations together with his father, Bunshin Shimamura, the charming old man with a hat that those who’ve visited the London Super Trunk Show 2018 might remember.
– I had no plans to join the shoemaking business, Makoto Shimamura says. I worked for a small airplane company as a co-pilot, when the company had to quit its business. I was on my way to join another airplane company, but my father needed help with the shoe business. This was in 2004, and here I still am. Obviously very different things, but I don’t really miss my old career, I like this a lot.
Here in the Matsudo factory ten people work, along with seven in the office. Production is relatively small, about 1,000 pairs per month, give or take depending on current situation. Which parts that are made here varies a bit, all upper making is done in the Vietnamese factory, and usually lasting and welting especially if hand welted, then the rest of the bottoming and finishing is done here. For the Japanese market, Goodyear welted shoes are the main business, although they also introduced a top range which is hand welted. Here they use cork plates for filling, instead of the more common cork paste. 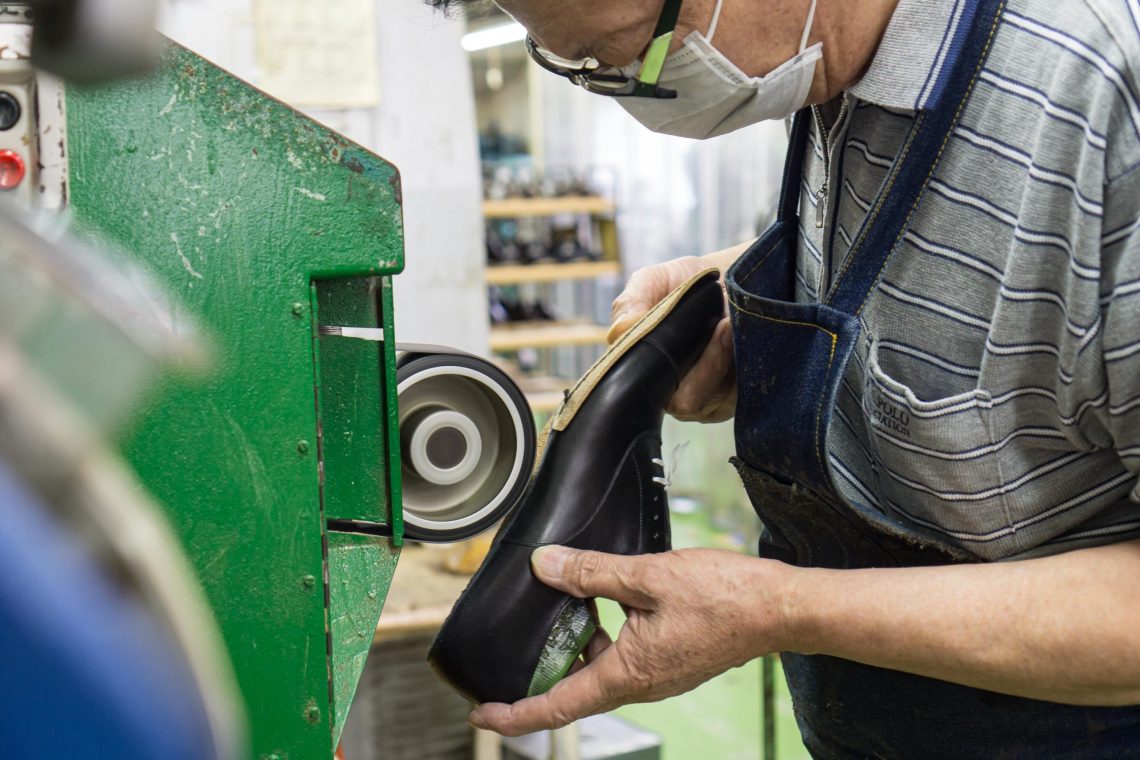 Sole hammered tight to the welt. Waiting for the outsole stitching.

As mentioned above, Perfetto is the main brand for the Japanese market, but also some under the branding Fugashin Tokyo is sold here (whereas the shoes that are made fully in Vietnam are branded Fugashin Saigon, but those don’t sell in Japan). Kanpekina is the international branding of Perfetto, which they’ve worked for many years to introduce in Europe.
– We’ve started exhibiting at large fairs like Pitti Uomo many years ago, and also been to many smaller local shoe fairs in various European countries. It’s mainly in France where Kanpekina has been established, sold at for example Upper Shoes and Printemps department stores. We initially focused on more bold make-ups which spoke to their customers, says Makoto.
Since Fugashin has started to make a name of itself internationally, focus seem to switch for this for the global market though, and here they among many other things have really cool hand welted seamless wholecuts and other special stuff. Workers trying to fix an issue with a Rapid sole stitching machine. In Japan this lovely rounded shape is relatively common, something I wished we could see more on European shoes as well.

In Japan Perfetto is priced at about 50-60 000 yen (380-450 euro), which is a really good price for well-made Goodyear welted shoes with closed channel leather soles and slightly bevelled waits, in European leathers. However, competition is fierce in Japan both from other domestic brands and international ones. And from other types of shoes.
– Higher priced dress shoes are declining in Japan, unfortunately, as in many other places of the world. Being a maker of classic Goodyear welted shoes in Japan today is tough for most of us, but we continue the struggle, and hopefully it will be worth it. Time for shoe cream and polish. Old Perfetto shoes that a customers has sent in for a resole. Finish of shots of finished shoes from the factory, here’s a slim waist with what’s usually called fiddle back.