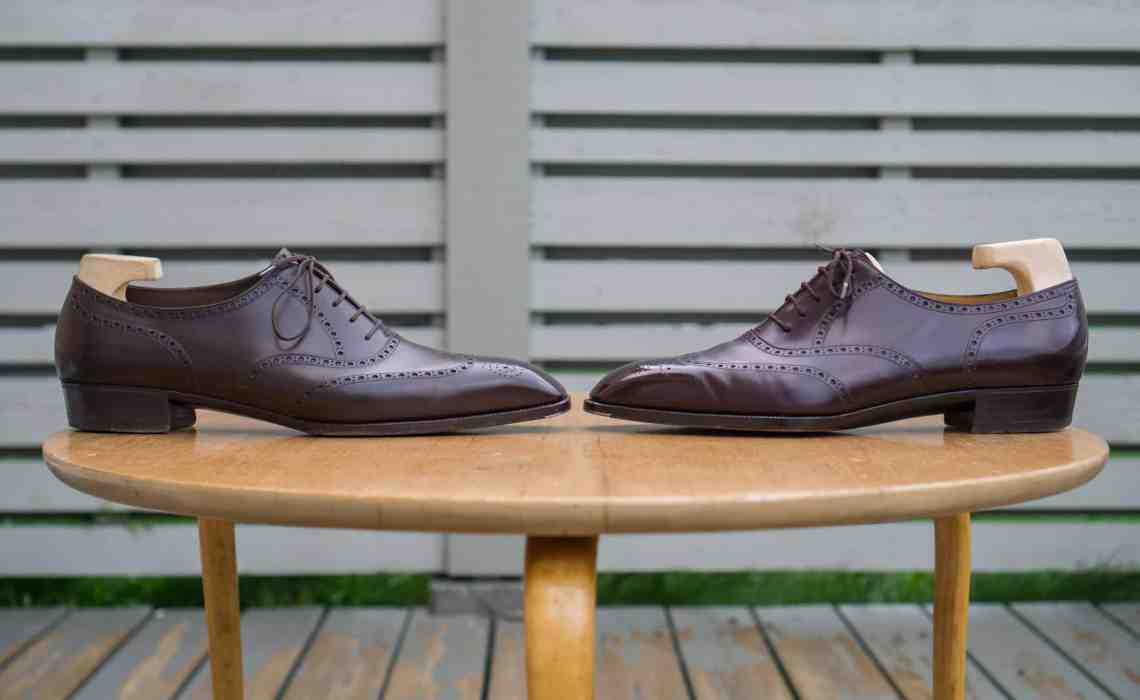 Yohei Fukuda and Marquess/Shoji Kawaguchi are two of the most well renowned bespoke shoemakers in Japan (and in the world, for that matter), who have a lot of similarities between them. Here’s a nerdy but hopefully interesting comparison between them and their versions of a faux full brogue.

The pair from Yohei Fukuda are mine, and the Marquess pair belongs to Stefan Ravnanger who works at Skomaker Dagestad in Oslo. We often see these close-ups etc on new shoes, not that often on used ones, which in my opinion adds an extra dimension (after all this is how the shoes look IRL, they are only new once). Yohei and Shoji They both have trained in England, they have a thing for English shoes from the first half of the 1900’s, and they have a very high quality in the making. They are also good friends.

Stefan and I have very similar feet (mine are just a tiny bit wider and shorter) which makes the comparison more relevant. Both are faux full brogues, both chiseled toes, my Yohei Fukuda’s in a burgundy aniline calf (don’t remember if it’s vintage Ilcea or Zonta, we were discussing both), the Marquess’ are in dark brown vintage Freudenberg calf. Of course some has do with our different feet and the specifications, and they can do stuff very differently from here, but overall both Stefan and I have used the house style specs, so to speak. Below some thoughts, facts and some very subjective comments. 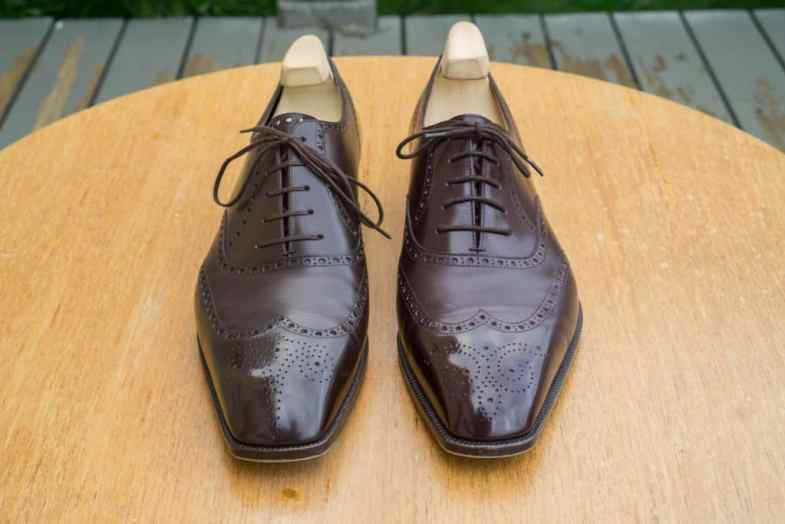 From this angle the last shapes are very similar. Marquess to the left, Fukuda to the right. Also in the profile view seen on top their quite alike. 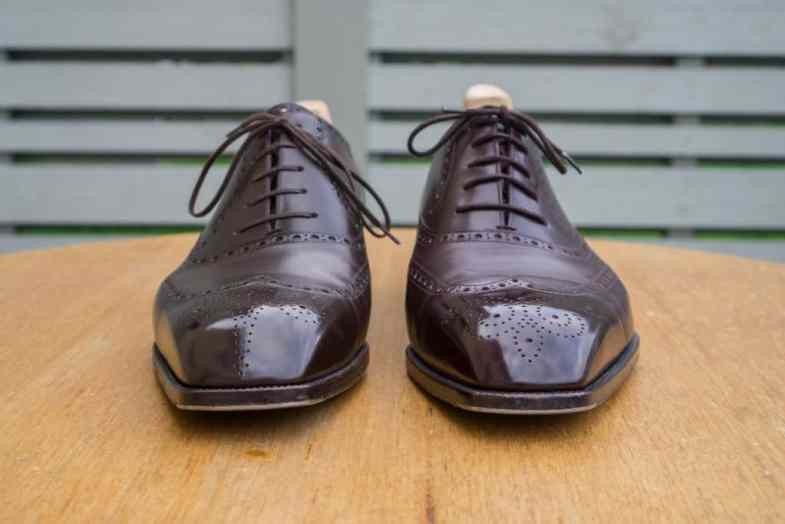 Quite sharp chisel on the sides on both shoes. From this angle the lasts are more different. Marquess to the left has a longer and wider toe, while the Fukuda’s are more angled inwards a bit more narrow toe. They could maybe be a couple of millimeters longer IMO, but overall I prefer the shape of the Yohei shoes. Here you see one of the more obvious differences, the fact that Marquess (now to the right) has a seamless heel and hence makes his faux full brogue in two pieces of leather, while Yohei has a back seam and makes the model with three leather pieces. The heel shapes are very similar, they are quite straight on the in- and outside while they tapper at the back (see next pic). Marquess heel is slightly narrower though, mainly due to the fact that he cuts the heel extremely close, closest I’ve ever seen. The Fukuda’s are very tightly cut as well, but the Marquess another mm or so even tighter. 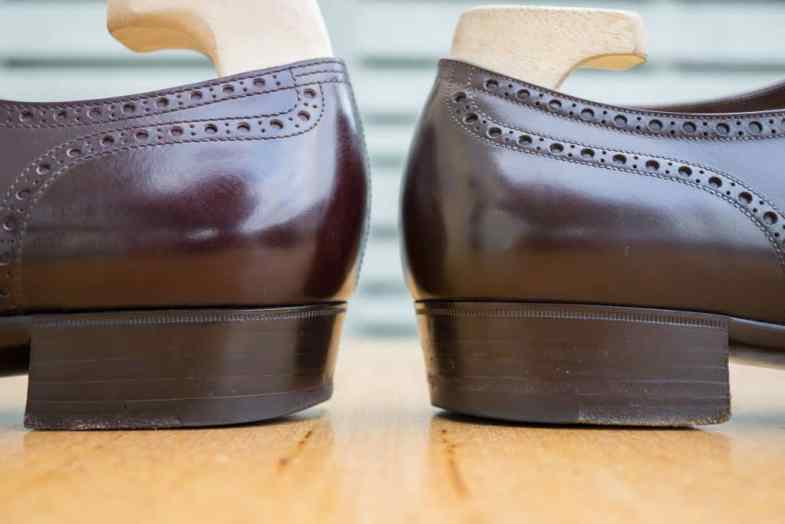 Pattern wise Yohei’s back counter goes a little bit higher and shorter. The closing is phenomenal on both shoes. Marquess has a bit thinner heel lifts, but the shape of the heels are as mentioned above very similar. 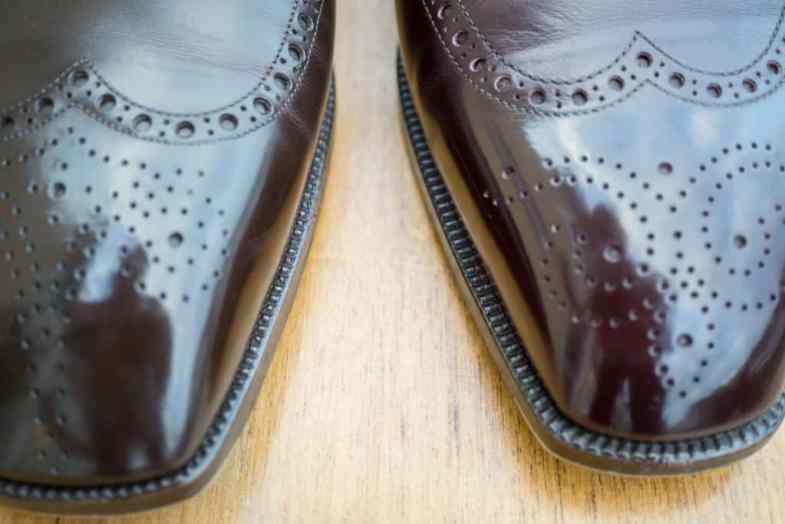 Shoji/Marquess (now to the left again) has a tighter trimmed sole edge, and also a bit higher SPI of the sole stitching (12 spi I believe, vs 10 on Yohei’s shoe. Note that Yohei does 12 spi as well, you usually choose between 10 and 12). I think Yohei’s welt is a bit cleaner executed though, maybe a bit due to the fact that it’s wider and a bit easier to work with. it looks more distinct in it’s shapes. This is Yohei’s medium sole edge, one can choose to trim it tighter or have it wider, more Italian styled. 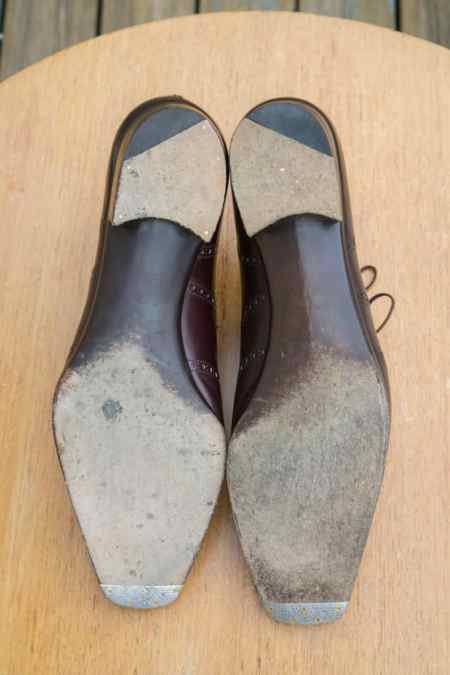 So, a look at the underside. Both shoes have very slim waists. Yohei (to the left) has a bit more curved and shorter inside of the waist shape (Stefan’s and mine heel to ball length are very similar, so this is directly comparable). Both use quite small rubber top pieces, that are very angled (too much angled for me at least, I wear down the leather on the inside of the rubber piece quite a lot). Both have sunken lulu metal toe plates. 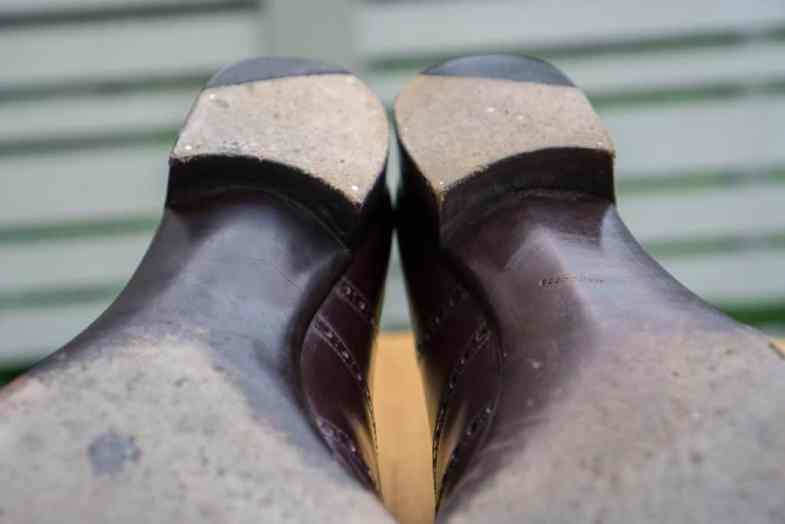 Marquess (to the right) has a small ridge making it almost like a mix between a bevelled and a fiddle waist. Both waists are blind welted, and on the inside they are very thin towards the edge. The shoes from Yohei even more so, it’s hard to capture on picture but it’s very thin out towards the inside waist edge. Both makers use a braided reinforcement stitch at the bottom of the lacing opening. Old school stuff, not necessarily any improvement functional wise, but it adds a bit extra touch to things. The leather on Yohei’s shoes is nice, but have to say that the vintage Freudenberg really is something extra, so supple and rich. 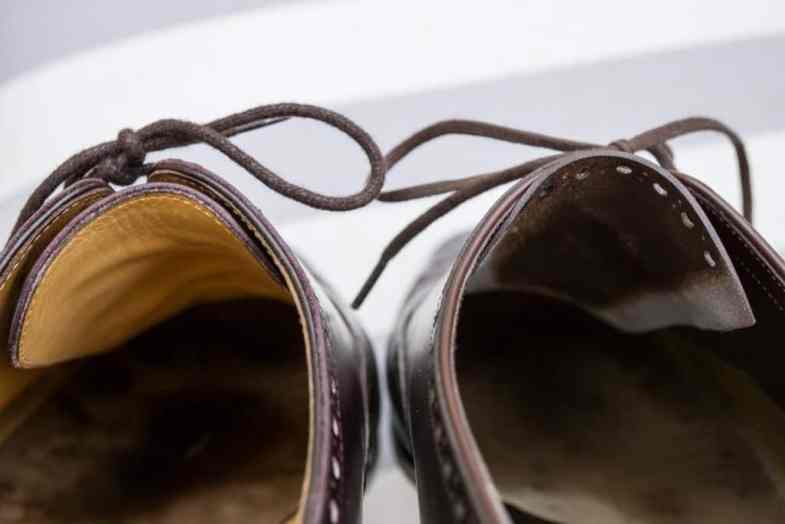 Here’s an interesting feature on the Marquess shoe to the right, where you can see how it has an unlined tongue which is skived very thin towards the edges. Super clean work.